Every chapter available in the KSEEB SSLC Class 10 English Solutions subject is explained clearly in an easy way. Learn the depth concept by referring to the Chapter wise Lochinvar Questions and Answers Pdf, Notes, Summary Class 10 English Karnataka State Board Solutions. Have a look at every topic and get the complete knowledge on the English subject. Just refer to Karnataka Class 10 English Poem Chapter 4 Lochinvar pdf and have a grip on the total subject.

I. Answer briefly the following questions.

Question 1.
Who was Lochinvar? Why did he ride to Netherby Hall?
Answer:
Lochinvar was a brave young knight who was in love with Ellen. Ellen was getting married to another person at Netherby Hall. Lochinvar came to claim her as his own.

Question 2.
What qualities of Lochinvar are highlighted in the first stanza?
Answer:
Lochinvar was confident as can be understood by the fact that he came alone and without any weapons other than his broadsword. He was faithful in love and hence came, even at the last minute, to claim his beloved.

Question 3.
Lochinvar rode the horse passionately to meet Ellen. What actions in lines 7 and 8 reveal his hurried movements?
Answer:
The lines, “He staid not for brake, and he stopp’d not for stone. He swam the Esk river where ford there was none.”

Question 4.
What qualities of the bridegroom are listed in stanza 2?
Answer:
He was a ‘laggard in love’, so timid that he couldn’t even express his love to Ellen, and was a ‘dastard in war’, i.e., cowardly and hardly any competition to brave Lochinvar.

Question 5.
What evidence is there in stanza 3; to show that the bridegroom was a! coward? ‘
Answer:
The bride’s father spoke to Lochinvar with his hand on his sword because the poor craven bridegroom did not say a single word.

Question 7.
What answer did Lochinvar give the bride’s father?
Answer:
Lochinvar replied that he had wooed Ellen for a long time, and when he had asked Ellen’s father for permission to marry her, he had been denied permission. Still, for the sake of his old love for her; Lochinvar had come to dance the last dance with her and drink just one cup of wine with her.

Question 8.
What quality of love is highlighted by Lochinvar when he says,
a. “Love swells like the Solway, but ebbs like its tide.”
Answer:
Lochinvar wants to say that he had once loved Ellen, but upon being denied permission to marry her, had stopped loving her.

b. Does this truly reflect Lochinvar’s love for Ellen?
Answer:
No. It hides his true love for her.

c. If not, why does Lochinvar tell him what is not true?
Answer:
The bride’s father is surrounded by his brothers, kinsmen and many other people. Hence Lochinvar doesn’t want to reveal his love and his intention at once. He understands he will. be attacked and killed. He wants to gain time till he has got the girl’ near himself and can give her his signal to escape.

Question 9.
What other lies does Lochinvar tell Ellen’s father?
Answer:
Lochinvar tells that his only purpose . in coming there was to drink one cup of wine, and dance one dance with her, for the sake of their old love together. He also says that there are many other, maidens in Scotland who are lovelier than Ellen and would gladly be his wife.

Question 10.
How did Ellen express her love towards Lochinvar?
Answer:
Ellen kissed the goblet of wine which Lochinvar took up. After he had drunk the wine and thrown down the cup, she looked down to blush and looked up to sight with a smile on her lips, and a tear in her eye.

Question 11.
What was the impression of the bridQrmaidens about the pair- Lochinvar, and Ellen?
Answer:
Seeing Lochinvar and Ellen dance together very gracefully, the bride-maidens whispered that it would have been immensely better if their fair cousin had-been matched with young Lochinvar.

Question 12.
What mixed feelings are brought out in stanza 5?
Answer:
Ellen is happy to see Lochinvar and is glad that he hasn’t forgotten her,’ but is also sad that she has to many someones else.

Question 13.
What clues of his plan doe’s Lochinvar give Ellen?
Answer:
As they danced and came near the door, Lochinvar touched Ellen’s hand and whispered one word in her ear, signaling her to be ready to escape.

b. Why does she shed a tear?
Answer:
She regrets having to marry someone else.

Question 15.
Pick out all the adjectives that describe Lochinvar.
Answer:
The adjectives’ describing Lochinvar are: young, unarm’d, faithful in love, daring in love, dauntless in war, stately form, brave, gallant.

Read the following extracts carefully. Discuss in pairs and then answer the questions given below them.

Question 1.
Love swells like the Solway but ebbs like its tide.
a. What is Solway?
Answer:
Solway is a river that separates England from Scotland.

b. Who does, Lochinvar speak this line to?
Answer:
Lochinvar speaks these lines to Ellen’s father, the man who had turned down his love for her.

d. Explain the figure of Speech.
Answer:
Lochinvar’s love for Ellen had been great like the. swelling waters of the river Solway, but after getting to “know about her marriage to another person, it had ebbed, i.e., completely died out.

Question 2.
Then spokethe bride’s father, his hand on his sword (For the poor craven bridegroom, said never a word).
a. What did the bride’s father speak?
Answer:
The bride’s father had denied permission to Lochinvar to marry Ellen. Hence, when he saw him at the marriage hall, he demanded to know why he had come. Moreover, the bridegroom was a timid man who did not dare to question Lochinvar.

b. Why did he keep his hand on the sword?
Answer:
If Lochinvar had said that he had come to take away the bride, the bride’s father wanted to kill him.

c. Why didn’t the bridegroom say even a word?
Answer:
He was too afraid to speak to Lochinvar.

Discuss in pairs/groups of four each the answers to the following questions. Note down the important points for each question and then develop the points into one-paragraph answers.

Question 1.
Pick out all the details from the poem which help Lochinvar to hide his real intentions.
Answer:

Paragraph: Lochinvar was confronted by Ellen’s father. He asked him as to what had brought him to Netherby Hall. Lochinvar replied that it was true that he had wooed his daughter for long. But his proposal of marriage had been turned down by him. He told him that his love which had swollen like the waters of the Solway had now receded, that he was no longer in love with Ellen. His intention in visiting the Netherby Hall was only to dance at her wedding and drink a cup of wine to toast to her happiness. He reassured the father that there were brides far more beautiful than Ellen in Scotland who would gladly be his wife.

Question 2.
How did Lochinvar finally win Ellen for himself?
Answer:

Paragraph: Lochinvar gave Ellen’s father to understand that he had come to the wedding in peace. Before he could be stopped he took Ellen by her hand and began to dance. He used this as an excuse to iead her close to the door where his war horse was waiting. Once at the door he whispered something into her ear and then took off with Ellen at such speed that the supporters of the Netherby clan couldn’t catch up with them. Lochinvar finally managed to win Ellen as his bride.

Question 3.
“Only the brave deserve the fair.” Justify the statement with reference to the poem:
Answer:

Paragraph: The cowardly groom didn’t deserve Ellen not any bride as his companion. The poem illustrates the point concisely. Lochinvar having been in love with Ellen wished to many her. But her father didn’t approve of his offer of marriage. A coward was chosen to be her groom. But being brave Lochinvar took the matter into his hands. He attended Ellen’s wedding like any peaceful guest. He tricked the father to believe that he. had come to wish Ellen well. He chose to dance but one dance with her. Being both brave and clever he led her towards the door and took off on his horse waiting there. The Netherby clan was never able to find the couple. Hence, brave are rewarded for their courage and the cowards lose what they have.

This ballad is about a young promising knight of the highlands.

He came riding through the wide border of the west, on his horse which was one of the best horses. For defense, he had only a sword.

He rode all alone to meet the girl he loved. Lochinvar was well-known for his bravery both in war and love.

He did not stop for even a second, no matter what difficulties came in his path.

He even swam across the Esk river where there was no shallow point (ford). However, even before he reached Netherby Hall the bride had consented to marry someone else, a man who was both cowardly and laggard in love.

Bravely, Lochinvar entered the Netherby Hall, even though it was filled with the bride’s relatives and brothers.

The bride’s father asked him if he had entered in peace or to fight.

Lochinvar replied that for a long time he had wooed his daughter, but his marriage proposal had been rejected. His love for her was like the waters of the Solway, had been high like the swollen water but now had ebbed.

He had come to dance one last time with Ellen and drink one cup of wine at her wedding.

He also added that there were more beautiful girls in Scotland who would readily become his wife.

The bride Ellen gave him a goblet of wine, which, he drank and then they danced.

She had a smile on her lips, but there were tears in her eyes. While dancing, Lochinvar whispered something in her ear.

They danced towards the door where his horse was waiting. Quickly he swung her on the saddle and rode away.

All the clans of the bride’s side chased them but could not catch them, and so they escaped. 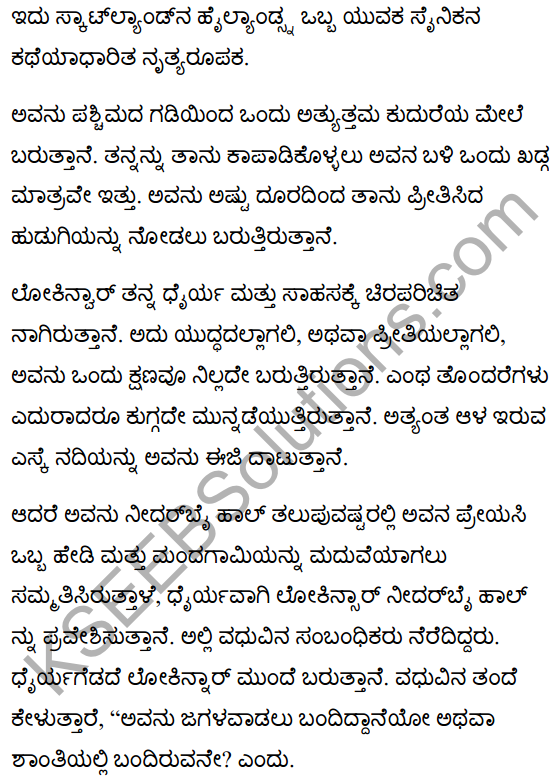 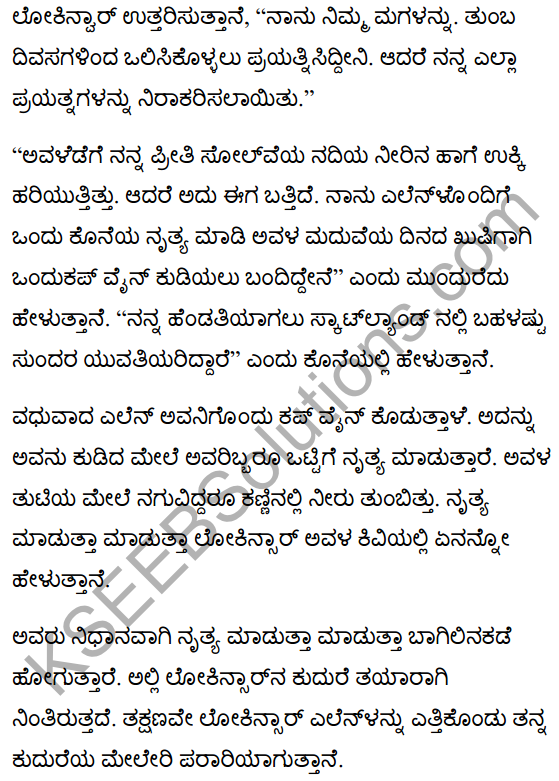 Hope all the information given regarding Karnataka Class 10 English Chapter 4 Lochinvar will help you to get good knowledge. For any queries, you can contact us and clear your doubts. Connect with us using the comment section. Also, we love your feedback and review. Get your Chapter Wise Karnataka Secondary Education Examination Board Class 10 Textbook Solutions for English PDF start learning for the exam.