To a Pair of Sarus Cranes Poem Questions and Answers, Notes, Summary

I. Answer briefly the following questions

To A Pair Of Sarus Cranes Class 10 KSEEB Solution Question 1.
The time of the day suggested in the poem is
a. sunrise
b. sunset
c. either sunrise or sunset
d. not clear
Answer:
(a) sunrise

To Pair Of Sarus Cranes Summary Class 10 KSEEB Solution Question 4.
How was the majestic neck humbled by the hunter?.
Answer:
The neck of a Sarus crane is very long, graceful and beautiful. At a time when the bird was stretching its neck and trying to do something impossible like pulling the sun out of the rim of the horizon, the bird was shot in the neck. When it fell down dead, the hunter, without paying any attention to the beauty that was lost through his action, casually picked up the bird ‘hands and jaws’, crumpled it like a piece of paper and threw it into his bag without a second look at it. In this manner, the majestic neck has humbled the hunter.

To A Pair Of Sarus Cranes Poem Class 10 KSEEB Solution Question 8.
How is the end of the female crane suggested in the poem?
Answer:
It is said that ‘a wave of the ses she had never seen’ came to her and carried her away. It cannot be the real sea because the cranes lived near the sea. It could be a wave of grief which the bird had never known as long as her partner was alive. She was always very happy, and the death of the male bird pushed her towards sadness. Grieving for the male bird and sitting on his blood-stained feathers, the female bird forgot to eat or drink and thus, becoming very weak, met her end.

Read the following extract carefully. Discuss in pairs and then write the answers to the questions given below it.
A wave of the seas she had never seen/came to her from far away/ and carried her to him.

Discuss in pairs/groups of 4 each and answer the following questions. Individually note down the points for each question and then develop the points into one-paragraph answers.

To A Pair Of Sarus Cranes Is Taken From Class 10 KSEEB Solution Question 1.
How is the callousness of the bird killers brought out in the poem?
Answer:

Paragraph: The callousness of the hunters is brought out in the way the poet describes killing of a male sarus bird. It was shot when the bird had dipped its beak in the water. It seemed like it was trying to pull the reluctant sun out of the water at the rim of the horizon. The hunters were not touched by the beauty of the bird. They picked up the dead bird by its hands and jaws
and flung it into a course bag as if it were a piece of dirty linen and the bag a washing bag.

To Pair Of Sarus Cranes Class 10 KSEEB Solution Question 2.
How does the poet bring out the agony and desperation of the female crane in the poem?
Answer:

Paragraph: The cranes pair for life. Having seen its mate shot dead by the hunters and being taken away, the female sarus is heartbroken. The bird circled the sky with grace mourning over the disgraceful end of its partner. After the killers had left the place, the female bird returned to the death scene and kept flying around whining for its companions« with short and long wails resembling the Morse Code. With her beak she kissed and bloodstained feathers of her mate which the wind had not yet carried away and sat down to hatch them in the hope she could bring him back to life. This shows the agony and the despair of the bird.

A Pair Of Sarus Crane Summary Class 10 KSEEB Solution Question 3.
Pick out any two figures of speech used in the poem and explain how they add to the effectiveness of the poem.
Answer:
The first stanza of the poet contains a figure os speech – the hyperbole – which is used to highlight a particular point through exaggeration. The male Sarus crane is shown as if it is stretching its neck to pull out the sun from the rim of the horizon. It is shown to be engaged in an impossible act, and yet the very attempt to do it shows the courage of the crane. However, the bird was no match for the cunningness and heartlessness of man.

The second stanza contains the figure of speech ‘simile’ – “to lie like dirty linen”. The proud, dignified bird was killed and thrown into the washing bag like dirty linen. This reveals the callousness and lack of aesthetic sense of the hunter. The beautiful, graceful bird was just a piece of meat for him.

To a Pair of Sarus Cranes Poem Summary in English

A hunter kills a male sarus crane for sport without realizing the impact it would have on the female sarus crane, he also does not realize what it can mean to the eco-system that they are a part of.

The female crane is distressed at the scene she witnesses, she gracefully flies around the scene in circles and croons over the disgraceful end of her partner.

The bird cries over the careless disregard and lack of dignity with which the dead bird is picked up by the callous hunters. She encircles the death scene making shrill cries over it.

The poet compares the shrill cries with the dots and pits of Morse code hinting at the keen ear required to understand the grief that is being expressed.

Finally, a wave that the female crane had never seen before comes and sweeps her away to death and closer to the dead male crane.

And the poet says that the female sarus crane went beyond Hume’s words and beyond the legends and fables of human love.

To a Pair of Sarus Cranes Poem Summary in Kannada 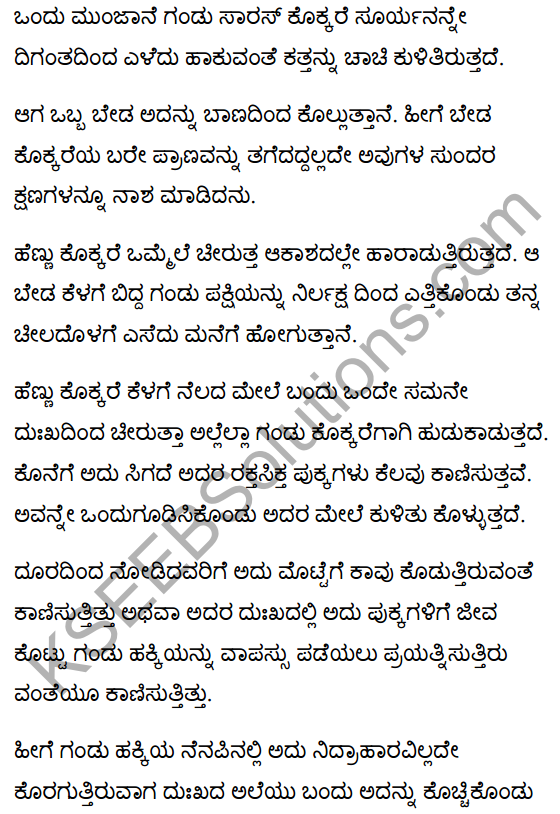 Hope all the information given regarding Karnataka Class 10 English Chapter 1 To a Pair of Sarus Cranes will help you to get good knowledge. For any queries, you can contact us and clear your doubts. Connect with us using the comment section. Also, we love your feedback and review. Get your Chapter Wise Karnataka Secondary Education Examination Board Class 10 Textbook Solutions for English PDF start learning for the exam.