The Eyes are not Here Questions and Answers, Notes, Summary

I. Answer briefly the following questions.

Question 2.
Why did the narrator feel that he would never be able to discover something about the girl’s looks?
Answer:
He was blind and he did not want to ask any question that would reveal his blindness. Besides, the girl was going away.

Question 4.
What did the narrator infer when the girl was startled by his voice?
Answer:
The narrator inferred that like all people with good eyesight, even she had failed to see what was right in front of her.

Question 6.
How could the narrator, being blind, describe Mussoorie?
Answer:
Since he was not born blind, probably he had seen Mussoorie when he had eyesight.

Question 7.
With what intention did the narrator remark that the girl had an interesting face?
Answer:
He wanted to please her, and also pretend to be normal-sighted.

Question 8.
Hiding his blindness was a for the narrator, (challenge/game/child’s play). Choose the correct answer.
Answer:
(b) game.

Question 9.
The new fellow-traveler had made out that the girl was blind. (Say True/False.)
Answer:
True

Question 10.
The story ends with a revelation. What is the revelation?
Answer:
The narrator had thought he was playing a game and trying to fool a normal-sighted person. He came to know that he was actually trying to fool a person blind like him. He also realized that even she had played a similar game with him, hiding her blindness.

Read the following extracts carefully, JDiscuss in pairs and then write the answers to the questions given below them.

Question 1.
“You may break, You may shatter the vase if you will, but the scent of the roses will linger there still….”
a. What is the figure of speech used in the passage above?
Answer:
metaphor

b. What is the vase compared to?
Answer:
a person

c. What does the shattering of the vase refer to?
Answer:
a person’s going away

d. What does ‘the scent of the roses’ refer to?
Answer:
their memories.

Question 2.
“Once again, I had a game to play, a new fellow traveler”.
a. What kind of the game does the speaker play with his fellow, travelers?
Answer:
A game through which he tries to fool the other person into thinking that he is normal-sighted.

b. What do you understand from this about his attitude?
Answer:
He resents his blindness and also thinks that normal-sighted people are over-confident about their powers of observation.

c. Who had out-witted whom, in the game already played by the narrator?
Answer:
The girl had outwitted the narrator.

Discuss in pairs /groups of 4 each and answer the following questions. Individually note down the important points and then develop the points into one – paragraph answers.
1. Give instances to show that the narrator tried his best to impress that he was normal sighted during his encounter with the girl.
Answer:

Paragraph: Initiating the conversation and hoping to keep her from realizing that he was blind, he described the scenery from his memories. He also asked the girl a question, and she told him to look out the window for himself. To continue the ruse, the narrator told the girl that she had an interesting face since he did not actually know how she looked.

Question 2.
Everyone thinks, he could out-wit anyone but sometimes, he himself is out-witted by others. Substantiate this with reference to the story.
Answer:

Paragraph: After listening to the parent’s conversation with the daughter, the narrator could not distinguish any unusual advice or information that led him to believe the girl had any handicap herself. The narrator fooled himself. Apparently, he also misled the girl because she did not realize that her fellow traveler was blind either.

Question 3.
The story ends with the new fellow- traveler telling the narrator that the girl was completely blind. What do you think, would be the feelings and thoughts of the narrator after knowing the truth?
Answer:

Paragraph: Both the readers and the narrator ultimately learn a very valuable lesson about the influence of initial assumptions on the ways we perceive (or fail to perceive) the world and other persons.

A. Make sentences using the following idioms and phrases.
to see one off, to pull out of, to take in, to call on, to break into, to be deprived of, in front of, to be covered with, to move away, to take up.
Answer:

3. lonely × alone:
Lonely – the feeling of being isolated; the feeling can arise even when surrounded by many people;
Alone – the state of being physically all by oneself;

4. change × alter :
Change – move from one system or situation to another;
Altar – make or become different;

5. vendor × hawker :
Vendor – sells one or two goods, most often in an establishment; Hawker – sells different types of goods and has no establishment;

6. probable × possible :
Probable – likely to happen or be the ease;
Possible – capable of existing, happening or being done;

7. look × see :
Look – direct one’s gaze in a particular direction; usage is – look at (someone/something);
See – become aware of with the eyes;

8. hear × listen :
Hear – become aware of (something) with the ear;
Listen – given one’s attention to a sound;

11. break × brake :
Break – to cut into pieces;
Brake – a device for slowing or stopping a moving vehicle;

C. Following is a list of words which refer to different sounds made by mouth and nose. Complete the sentences with the appropriate words from the list.

Question 1.
Report Writing:
Here are the details of an itinerary, of the Prime Minister’s visit to Bengaluru on Saturday. Put all the details in a paragraph.
Time Programme

Question 2.
Discuss the following in groups of 4 each. One among the four will note down the important arguments and share it with the neighboring group. Imagine that both the narrator and the girl admitted to each other that they were blind. How then, do you think, would the story end? Do you think such an end would make the story better? How?
Answer:
Points :

B. Informal Expressions used in Conversation :
Question 1.
The following list contains informal expressions commonly used in conversation. Use the expressions from the list to complete the sentences given below. Do it in pairs.

Question 2.
Now, write sentences of your own using the above informal expressions and read them out to each other in pairs.
Answer:

A. Modals
How good is your knowledge of your class/ school?
Answer the following questions using only the expressions given below. Form groups of 4 each and read your answers to your group.
It could/might/maybe …………. (to express possibility)
It must be …………. (to express your conclusion.)
It can’t be ……………. (to express strong improbability)

B. Complete the following sentences with the most appropriate alternatives.
1. _________ our many faults, our parents love us.
a) Besides
b) Even though
c) In spite of
d) Having
Answer:
(c) In spite of

18. I had scarcely passed my twelfth birthday when I entered the inhospitable regions of examinations, through which for the next seven-year I __________ to journey.
a) will be destined
b) would be destined
c) was destined
d) destined
Answer:
(c) was destined

21.When asked about the mischief, the three boys looked at
a) each other
b) one another
c) the other
d) one other
Answer:
(b) one another

23. my good advice, Latha walked home in the rain
a) Rejecting herself of
b) Away from
c) Contrary to
d) With
Answer:
(c) Contrary to

The Eyes are not Here Summary in English

A blind man was traveling all alone in a train compartment when at Rohana a girl got in.

It was clear that her parents had come to see her off as they were giving her instructions as what to do and what not to.

When the train left the platform, he asked her where she was going. She was startled on hearing his voice and said that she had not noticed that anyone was there.

The narrator decided that he would try his best not to make it apparent that she was blind.

Both started talking and the narrator spoke about Mussoorie. Then they discussed the scene outside the window.

Listening to the girl talk the narrator thought that her voice was like the sparkle of a mountain stream.

When they reached Saharanpur the girl said good-bye and went away leaving a lingering perfume behind her.

A man had got in at that station. He spoke to the narrator and told him that he would not find him as interesting a traveling companion as the girl who had left.

The narrator enquired of him whether she had long hair or short hair. The man replied that he hadn’t noticed.

He only knew that she had beautiful eyes, but of what use was that as she was blind. He further asked the narrator if he hadn’t noticed it.

The Eyes are not Here Summary in Kannada 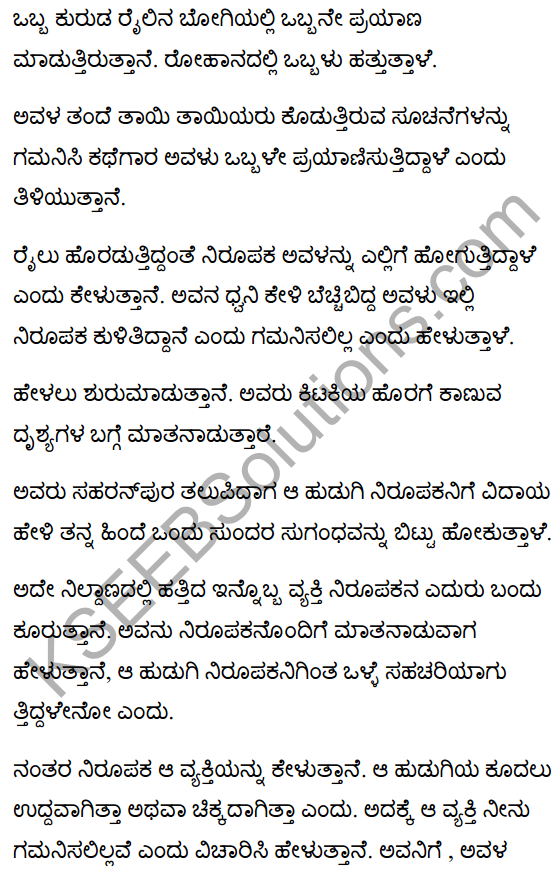 Hope all the information given regarding Karnataka Class 10 English Chapter 6 The Eyes are not Here will help you to get good knowledge. For any queries, you can contact us and clear your doubts. Connect with us using the comment section. Also, we love your feedback and review. Get your Chapter Wise Karnataka Secondary Education Examination Board Class 10 Textbook Solutions for English PDF start learning for the exam.