Enhance your subject knowledge through the KSEEB Solutions for Class 7 English Leg Trap Questions and Answers lay a stronger foundation of your basics. Verify your answers with the Karnataka State Board Class 7 English Prose Chapter 4 Leg Trap with Answers provided and know where you went wrong.

2. Amar is my friend. We walk together to school, We pass by a pond on our way. One evening when we were returning home from school, we saw a baby drowning in the pond. Suddenly Amar jumped into the water and saved the baby.

Question a.
What does this show about Amar?
Answer:
This incident shows that Amar was a brave boy. He was kind and ready to help others.

C1. Answer the following in a word, phrase or a sentence each:

Question 2.
Who was he living with?
Answer:
He was living with his mother and sister.

Question 3.
Where did he sit to earn a living?
Answer:
He would sit near a cinema hall and polish shoes to earn his living.

Question 5.
What made him stop it?
Answer:
He stopped counting money when he overheard a passer-by say “A thief has just robbed and escaped from the jewellery shop”.

Question 8.
How long did the customer ask Dhira to polish his shoes?
Answer:
First, he gave 5 Minutes when he saw the police he gave 2 minutes to polish the shoes.

Question 9.
What made the mail look Uke a rich man?
Answer:
The man was wearing costly clothes and the wristwatch made him look like a rich man.

Question 12.
What did Dhira find in the shoes?
Answer:
Dhira found the gold necklace in the shoes.

Question 14.
How did Dhira make the thief fall?
Answer:
Dhira quickly tied the ends of the laces of the two shoes. When the thief tried to walk, he fell on his face.

V1. Complete the story using the words given in brackets. One is done for you.

Two women who were on their morning walk were stopped by two friends riding on a scooter. The women had heard of the frequent thefts in the area. Fearing that the rid-ers would snatch their neck chains, they im-mediately shouted for help. One of them fumbled in her purse to get the mobile. But the men lost their temper and told them that they were searching for an address. When the women glanced at the address they realized that it was their own.
(fumbled, glanced, temper, stopped, thefts, shouted)

C2. Answer in two or three sentences each:

Question 1.
What do you understand by Dhira’s story?
Answer:
Dhira was a courageous boy. He had a good presence of mind. He was bold and ready to take risks when it is necessary. He was also an intelligent boy. We can understand that we should be as brave as Dhira.

Question 4.
Why did Dhira concentrate on polishing?
Answer:
Dhira was disturbed by the customer’s complaint. He thought that the customer must be an influential man and he would complain about him to the policeman. So he concentrated his attention on polishing the shoes.

Question 5.
How was Dhira rewarded and honoured for his bravery?
Answer:
Dhira was preached for his presence of mind by everyone, he was also awarded by the police and by the jeweller. His school also honoured him with a model for his bravery.

C3. Discuss with your partner and answer.

There was a marriage in our village last week, the bridegroom and his friends went around the village in an old cart drawn by an old horse. The cart fell into a ditch. We managed to pull the people out. The bridegroom was hurt and the others were unhurt. The bridegroom went through the wedding with a bandage on his forehead.

B. Fill in the blanks with suitable articles.

Once there was a poor merchant. He had a small shop. He sold bananas and other things in his shop. One day an old man came to his shop. He was poor and in rags. The shop-keeper took pity on him and gave him some money. The poor man was pleased. He thanked the shopkeeper for his help.

I went to the airport at 6:00 am yesterday. I had to catch a flight to Paris. The queue at the airport was very long. So I had to wait a long time. Once the plane took off I ate a good meal, a rare occurrence on an aeroplane! Later, I fell asleep for about an hour. After I woke up, I felt refreshed. Generally, it was – smooth flight.

G2. Let us know about tenses.

Fill in the blanks with past tense form of the verb given in brackets. Then rearrange the jumbled sentences to form a story.

One is done for you.

1. A milk-maid went to the meadow to milk her cows. Her plan was to sell the cream and butter that she got from the milk. She decided to sell them. She also dreamt of buying eggs and waiting for them to hatch. When all the fowls in the poultry farm were ready to be sold, she decided to sell them. She thought that she would make a lot of money. She then planned to buy a fine dress. Lost in such thoughts, she forgot about the pot she was carrying on her head. She tossed her head in pride and the pot of milk fell down. She dried, “Oh! I have lost all my milk! Let alone a new dress, I will not have even money to have food!
Moral: Don’t count your chicken before they are hatched.

G3. Fill in the blanks with past tense form of verbs in the brackets:

The Lark in the Corn-Field.

Once a Lark made (make) her nest in a com field. Soon she laid (lay) eggs in it, after a few days small babies hatched (hatch) out of them. One day the baby-larks overheard (overhear) the farmer say, “I will call my servants to reap this field”. The Baby-larks got alarmed to hear this and told (tell) their mother about it. “Don’t worry”, said (say) the mother. Some days later, the farmer came (come) again and said (say), I will call my son to reap this field.” The baby-larks were afraid again. “Fear not,” said, (say) the mother. But the next day the farmer came there and said, (say) “I will reap this field tomorrow.” “Now is the time to go. When a man says he will do the work himself, he will certainly do it.” said (say) the mother lark.
Moral: Don’t fear hollow threats.

G4. Complete each sentence by changing the verbs in brackets into past tense verb forms and later complete the crossword puzzle.
a. Across
3. Tony (read) read his book after dinner.
4. I (give) gave Anand a computer game for his birthday.
5. Dinakar (throw) threw the ball.
7. Jony (ring) rang the bell after school.
9. He (bring) brought his mobile to school.

b. Down
1. We (drink) drank banana milkshake dinner after last night.
2. Asha (catch) caught the ball quickly.
6. Esha (write) wrote a letter to his friend in Bombay.
8. Bindu (buy) bought a new dress at the mall.
10. The frightened cat (hide) hid under the bed. 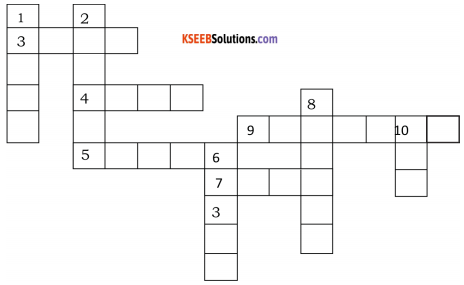 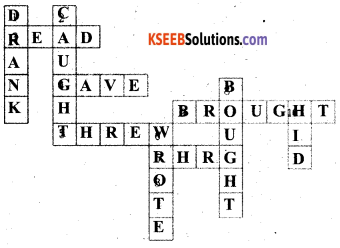 W3. Read the lesson carefully and make a list of the main incidents that happen in the story.

One is done for you.

W4. Study the pictorial story and write the story in the space provided. 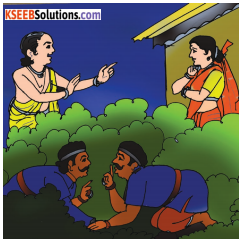 Tenali Rama told his wife that as thieves were around the place they would put all the jewels in the trunk.

2. Later with his wife, he put the box fillet with stones into the well. 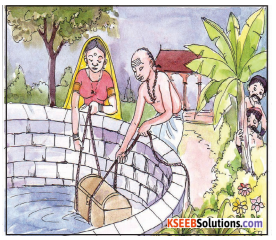 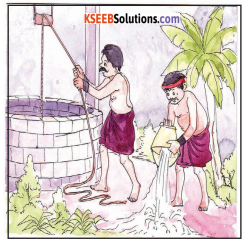 4. They were tired as they had drawn all the water from the well. 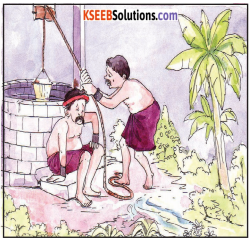 5. They brought the box from the well and found that it contained only stones. 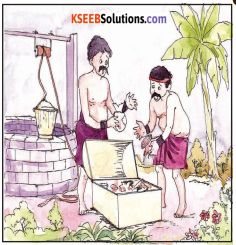 6. Tenali Rama came and said “Thank you for watering my garden.” 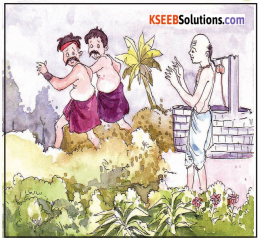 Intelligence is more powerful than physical power.
Mind Is Better Than Might.

S3. Imagine that you are the reporter of some well known newspaper. You have heard about Dhira’s courage shown in catching the thief. You want to report this to your newspaper and through this you want to inspire many young ones. You may act as the reporter and your friend as Dhira. Interview him in front of your classmates and then fill up the blanks.

Reporter: Hello Dhira, how are you?
Dhira: I am fine Sir, thank you.
Reporter: You have got a very good presence of Mind, Dhira.
Dhira: Yes sir. I have to live life on my instincts. We are poor people we have survive on our wits.
Reporter: How did the thought of being the shoe laces of the thief occur to you?
Dhira: It was the only way to trap him. Actually we used to tie shoelaces of our classmates as a prank and length when they fell down.
Reporter: Well anyway, you could be a good detective on the police force. Have you thought of joining the police force?
Dhira: Yes, sir, certainly. I would like to help to clean up the society of its crimes. 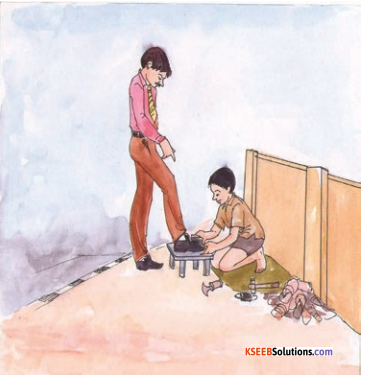 The lesson “Leg Trap” is a short story written by Manorama Jafa. The main character of the lesson is Dhira. He lost his father and lived with his mother and sister. After school hours he was shined shoes near a cinema hall. One hot day, he sat under a tree and counting his earnings, he heard that a thief had robbed a necklace from the Jewellery shop. He was very curious and was wanted to go towards jewellery shop to know more details. But a customer came and asked to him polish his shoes. Dhira was starting his work and assessed that the customer was rich man and influential. He saw two policemen were coming towards him.

When Dhira was polishing the shoe he found something sticking out of its back. To his astonishment it was the gold necklace. He thought of a plan, he tied the two ends of the laces of the two shoes together and rushed towards policeman. The customer tried to run away but he fell down. The two policemen came and arrested the Jewel thief. The gold necklace was found in his shoe and his beard in his pocket. Dhira was praised for his presence of mind. He was rewarded by the police and the Jeweller. He was honoured with medal for his bravery at his school also.
Though Dhira was young boy, he was brave and showed his courage in finding the thief. 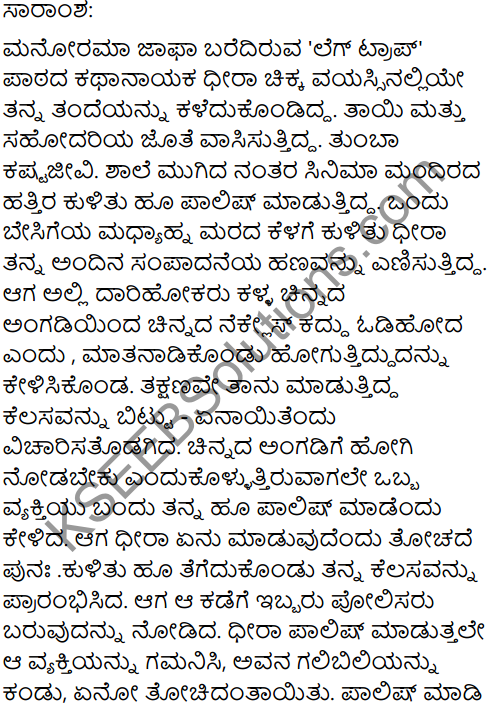 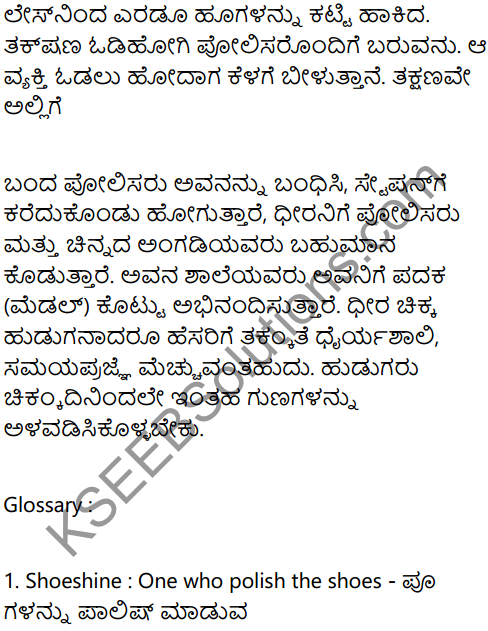 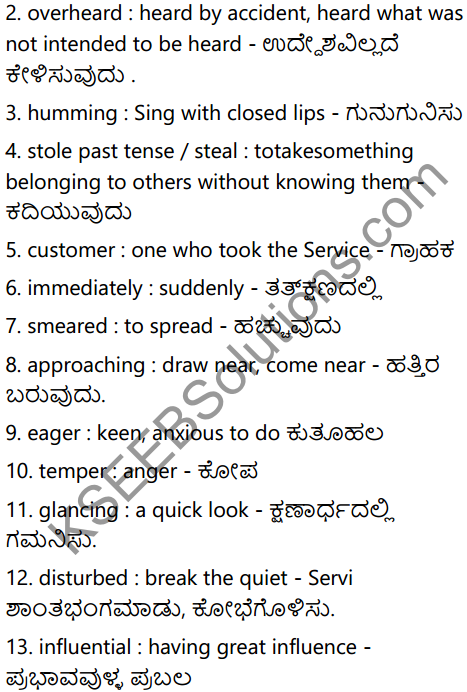 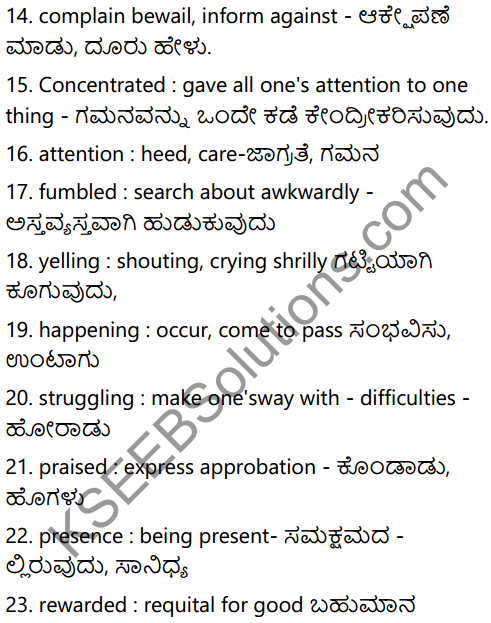 The above furnished information regarding KSEEB Solutions for Class 7 English Chapter 4 Leg Trap Questions and Answers is true as far as our knowledge is concerned. If you have any doubts feel free to reach us via the comment section and we will reach you at the soonest possible.