Question 1.
Which of the following has more inertia
(a) a rubber ball and a stone of the same size?
(b) a bicycle and a train?
(c) a five rupees coin, and a one rupee coin?
Answer:
a) a stone
b) a train,
c) Five rupees coin.

Question 4.
Why do you fall in the forward direction when a moving bus brakes to a stop and fall back when it accelerates from rest?
Answer:
Initially, when the bus is at rest our body also follows the same state. But all of a sudden when the bus starts to move the lower part of our body tends to move with the motion of the bus but the upper part rejects this state of motion and continues to be in a state of rest. This results in a sudden jerk backward when a bus moves. Also, a person standing in a bus will be in a state of motion, and when the brakes are applied the lower part of our body comes to the state of rest but our upper part is in state of motion. Hence, we tend to fall forward when the bus applies brakes.

Question 6.
Explain Why is it difficult for a firement to hold a hose, which ejects large amounts of water at a high velocity.
Answer:
From Newton’s third law, we know that every action has an equal and opposite reaction. So when a fireman holds a hose-pipe which is ejecting a large amount of water at high-velocity experiences a backward push due to the force of water flowing in the forward direction. Hence making it clear that due to the action of force in the forward direction the force is applied on the pipe in the backward direction, thus making the fireman difficult to hold the hose-pipe.

Question 8.
Two objects of masses 100 g and 200 g are moving along the same line and direction with velocities of 2ms-1 and 1ms-1 respectively. They collide and after the collision, the first object moves at a velocity of 1.67ms-1. Determine the velocity of the second object.
Answer:
Before collision 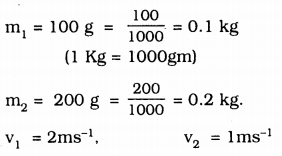 Question 1.
An object experiences a zero external unbalanced force. Is it possible for the object to be travelling with a non-zero velocity? If yes, state the conditions that must be placed on the magnitude and direction of the velocity. If no provide a reason.
Answer:
According to Newton’s 1st law of motion, no net force is required to move an object which is moving with a constant velocity. So when an object experiences a net zero external unbalanced force, then it can move with a non-zero velocity. Also if an object is initially at rest not net force acts upon it, thus the object may not move all.

Question 3.
Why is it advised to tie any luggage kept on the roof of a bus with a rope?
Answer:
Because even though bus comes to rest, luggage are in motion, They fall down. So, it is tied with a rope to prevent falling.

Question 4.
A batsman hits a cricket ball which then rolls on level ground. After covering a short distance, the ball comes to rest. The ball slows to a stop because.
a) The batsman did not hit the ball hard enough.
b) Velocity is proportional to the force exerted on the ball.
c) There is a force on the ball opposing the motion.
d) There is no unbalanced force on the ball, so the ball would want to come to rest.
Answer:
c) because the ball slows down to rest as the force of friction acting between the ground and the ball opposes the motion of the ball. 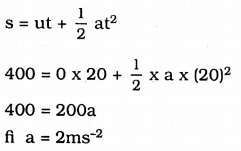 Question 10.
Using a horizontal force of 200N, we intend to move a wooden cabinet across a floor at a constant velocity. What is the friction force that will be exerted on the cabinet?
Answer:
The cabinet will move across the floor with constant velocity if there is no net external force of 200N that should be applied on the cabinet in opposite direction.
Thus, the frictional force = 200N
(Frictional force always acts in the direction opposite to the direction of motion)

Question 12.
According to the third law of motion when we push on an object, the object pushes back on us with an equal and opposite force. If the object is a massive truck parked along the roadside, it will probably not move. A student justifies this by answering that the two opposite and equal forces cancel each other. Comment on this logic and explain why the truck does not move.
Answer:
The logic given by students is not correct because two equal and opposite forces cancel each other only in the case if they act on the somebody. According to Newton’s third law action and reaction force always act on two different bodies, so they cannot cancel each other. When a massive truck is pushed then the truck may not the force applied is not sufficient to move the truck.

Question 17.
Akhtar, Kiran, and Rahul were riding in a motorcar that was moving with a high velocity on an expressway when an insect hit the windshield and got stuck on the windscreen. Akhtar and Kiran started pondering over the situation. Kiran suggested that the insect suffered a greater change in momentum as compared to the momentum of the motor car (because the change in the velocity of the insect was much more than that of the motor car). Akthar said that since the motor car was moving with larger velocity, it exerted a larger force on the insect. And as a result, the insect died. Rahul while putting an entirely new explanation said that both the motor car and the insect experienced the same force and a change in their momentum. Comment on these suggestions.
Answer:
The explanation given by Rahul is correct, as there is no external force on the system. So both the insect and motorcar experienced the same force and a change in momentum. .

Question 1.
The following is the distance-time table of an object in motion. 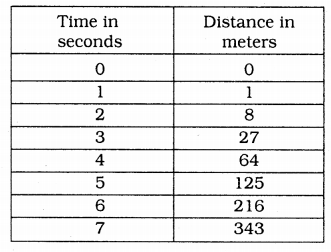 a) What conclusion can you draw about the acceleration? Is it constant increasing, decreasing or zero?
b) What do you infer about the forces acting on the object?
Answer:
a) Here, a = 0, 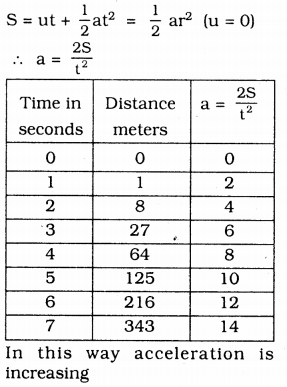 In this way, acceleration is increasing

b) Since acceleration is increasing. So-net unbalanced force is acting on the object. 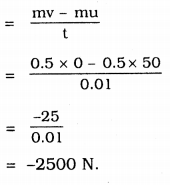 Question 4.
A motor car of mass 1200 kg is moving along a straight line with a uniform velocity of 90km/h. Its velocity is slowed down to 18 km/h in 4s by an imbalanced external force. Calculate the acceleration and change in momentum. Also calculate the magnitude of the force required.
Answer:
Mass m = 1200 kg. 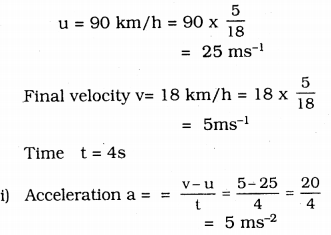 iii) Magnitude of the force required = Rate of change momentum