Question 1.
The founder of Gujarat Prathihara dynasty was ___________
Answer :
Harichandra.

Question 5.
The famous Sultan of the Khilji Dynasty was___________
Answer:
Allauddin Khilji.

Question 6.
The capital city was shifted from Delhi to __________during the rule of the Tughlaq.
Answer:
Devagiri.

Great poetic works like “Gita Govinda” of Jayadeva, ‘Kirataijuniya’ and ‘Karapurmanjari’ of Rajashekhar, “Mahaveera Charitra” and ‘Uttara Ramacharitra’ of Bhavabhuti, historical works like Rajatarangini of Kalhana, “Kumarpalacharitra” of Hemachandra, “Prithvirqjavijaya” of Chand Bardani are the significant works of Rajaputs’ period.

Question 2.
Explain the administration system of Iltamush briefly.
Answer:
Iltamush divided his kingdom into provinces (Ikta) and to oversee the administration, appointed provincial officers (Iktadars). He appointed a group of 40 slaves to advise in the matters of administration and justice. The Prime Minister and the Judges were advisors to the Sultan. He brought gold and silver coins into circulation. He completed the construction of Qutub Minar which was started in Qutubuddin’s time.

Question 3.
What were the administrative reforms implemented by Allauddin Khilji?
Answer:
Allauddin Khilji was not only a great General but also a capable administrator. He divided his vast empire into provinces and appointed Governors to look after them. He abolished religious endowments, teams, land and subsidy.

He established an efficient intelligence network. He levied heavy taxes on the rich. He banned the consumption of liquor. He also banned social gatherings of his lieutenants and their socialization with the public. He directed to collect tax from the landlords and farmers.

Question 4.
What were the administrative reforms implemented by Mohammad-bin-Tughlaq?
Answer:
Mohammad bin Tughlaq compiled a detailed record of land taxes pertaining to landholdings. He established the Department of Agriculture. Uncultivated land was utilized for farming and other purposes. He rendered financial help to the farmers. He increased the taxes in ‘do-ab’ area. He had gold and silver coins made according to the prevailing prices. He brought into circulation gold coin called ‘dinar’ and silver coin called adali’. After some years brought in copper and brass symbolic coins into circulation. He carried on his administration in the areas he had conquered in the Deccan. He conquered Madhurai in South India and appointed Jalaluddin Hasan Shah as governor for its administration. Thus Mohammad bin Tughlaq brought administrative reforms in practice.

Question 5.
What were the contributions of Delhi Sultans to art and architecture? Give examples.
Answer:
The Delhi Sultans introduced a new style of architecture known as “Indo- Islamic” Arches, domes, and minarets form the main features of this style. 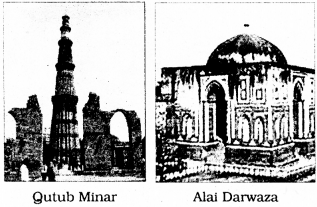