The Town by the Sea Questions and Answers, Summary, Notes

I. Work with your partner, the boy or the girl sitting next to you.and do this exercise. If your answer is “Not true”. say what is true. Substantiate all answers by reading to him/her the relevant sentences in the passage. Write down your answers.

Question 1.
The director woke up with the feeling that the building.
a. would be flooded, b. would be burnt down, c. would collapse (Underline the phrase that completes the sentence)
Answer:
a. would be collapse

Question 2.
The director cut off his wife’s call because he wanted to save himself first.
Answer:
True.

Question 6.
The director heard from Malacca that his family had survived.
Answer:
Not True.

Question 7.
The director’s heart broke when he felt his son’s misery.
Answer:
True.

Question 8.
The poor thirteen-year-old’s misery was that he had not been able to save his mother and sister.
Answer:
True.

Question 9.
When did the director become really anxious?
Answer:
When the director tried to call his wife he did not get any answer. Suddenly he observed a strange phenomenon. The water in the harbour had begun to rise rapidly and the anchored ship seemed to be swirling. He ran to the higher ground with others.

It occurred to the director that Nicobar Islands are low lying islands and Car Nicobar Islands stand only a few meters above the sea level at their height highest point. This made him anxious.

Question 10.
What did the director’s son tell him?
Answer:
When the director spoke to his son directly,, director came to know that family had been in the bedroom when the earthquake started. A terrifying sound from the direction of the sea had driven them into the drawing-room, but the boy had kept running; when the wave hit, the house dissolved into splinters and the boy was carried away as if on a wind.

Flailing his arms, he managed to take hold of something that seemed to be fixed to the earth. Through wave after wave he managed to keep his grip. When the water receded, he saw that he was holding on to the only upright structure when the director asked about his mother and sister the boy started crying, by saying that they just disappeared.

Question 11.
The mother and her sister had died. The boy feels he is to be blamed. This shows his sense of responsibility. Explain this point.
Answer:
The boy began to cry when his lather (director) enquired about his mother and sister because he felt his father may scold him of leaving them alone. Being a body of thirteen years what would he have done or try to rescue them. But in that particular instance without knowingly, the boy ran away in fear. Later when he realized that, he repented a lot which was impossible to rectify. This feeling of repentance made him to cry and also shows his sense of responsibility.

Question 13.
Why did the director choose his slides and not anything else?
Answer:
Director took only his slides and not any other things belonging to his wife or daughter because it may cause more pain which brings the memory of the past. It is an expression of the innermost sovereignty of the self because nothing now remains to cloud its vision. In the manner of his choosing there was not a particle of hesitation, but found comfort in the knowledge of an impersonal effort.

Question 14.
Words seem futile..”, says the author. Explain what he means.
Answer:
The author says that the words seem futile because he realized when the director didn’t want to get sympathy from others, he wanted to mourn alone. So the author felt that mere words are futile or useless to console anybody’s painful feelings.

Question 15.
How did the author himself intervene and act in the course of the events?
Answer:
The author tried to put himself in the director’s position and wondered what he would have done in those circumstances. He thought to himself that words were of no use to anybody.

Even thinking, reflecting, and writing about the events seemed trivial and wasteful. The truth is that nobody knows how people would react at that time. Only time will tell. It is an expression of the innermost sovereignty of the self.

Fill in the blanks to supply the correct forms of the word “surprise”.

It so happened that the author met the director again on December 26, 2005. He expressed his condolences on his great misfortune.

Over a cup of tea, they talked about that terrible night the previous year. Imagine what they might have said, and write a coversation between them.
(Conversation between director and author)

The Town by the Sea Additional Questions

Question 6.
How was he able do go to Car Nicobar islands? Why?
Answer:
He went by to Car Nicobar islands with the intervention of local administration and the officers on the airbase, he was able to get the flight. He spent the day searching through the rubble and found many possessions, but no trace of his wife and daughter.

Question 7.
What surprised the writer after the flood?
Answer:
Writer saw to his surprise that many thick strands of coconut palms were still standing even on the edge of the water. As far as the forest the canopy seemed almost undisturbed. It had caused maximum possible damage to life and property and left nature largely Unharmed.

Question 8.
Name the objects which were found in the directors house.
Answer:
Director hurried to a spot where there was a mound of household objects, his aristocrat suitcase, steel trunk, a cabinet, records of his office and slides. All these made the director to identify his belongings.

Question 9.
Why did family live in Malacca?
Answer:
Director’s wife was a teacher in school where she could have achieved a lot which the director couldn’t give her. Since transfer never came even after applying many a times, family lived in Malacca.

The Town by the Sea by Amitav Ghosh About the author:

Amitav Ghosh was bom in Calcutta on July 11, 1956, in Bengali Hindu family to Lieutenant Colonel Shailendra Ghosh, a retired officer of the pre-independence Indian army and was educated at the Doon school, St. Stephen’s college, New Delhi.

The “Delhi school of economics oxford where he was awarded D.phil in social anthropology under the supervision of Peter Lienhardt. His first job was at the Indian Express newspaper in new delhi.

Ghosh who resides in Newyork subsequently returned to India began working on ‘Ibis’ trio logy of which two volumes have been published, to date, ‘Sea of poppies’ and ‘River of smoke’. He was awarded Padmashri by the Indian government in 2007. In 2009, he was selected a fellow of the Royal society of literature.

The Town by the Sea Summary in English 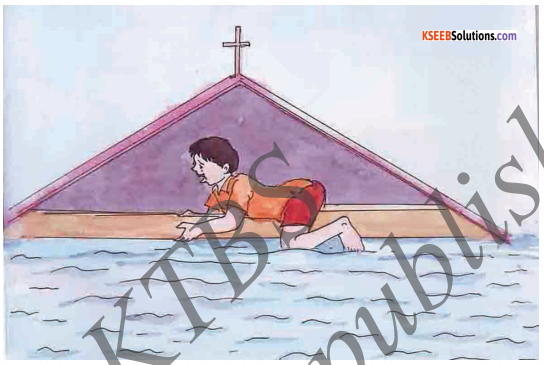 The Lesson ‘The town by the sea’ is a short story by Amitav Ghosh. The Story is about an heart-rending and disastrous natural calamity. A scientist searches for his dear ones lost in the calamity. In the end, he finds and collects only his experimental slides. He decides to immerse himself in his work to drown his grief.

The writer tells us than the ‘Director ’ was in Port blair on 25 Dec 2004, on his way to Delhi. As he was going officially, he had left his family in Malacca. That night he stayed in Haddo circuit House. The next morning he felt the earth shaking and floor of his room heaving. He ran out to save himself. At that time he received a call from his wife in Malacca, Camicobar. After the ground stopped shaking he tried to call his wife but could not reach her.

He observed that the Jea water in the harbor had began to rise very rapidly. He ran to the higher ground with other people to safety. He was reminded of the fact that the Car-Nicobar islands were low-lying islands and he grew – anxious. He called the government office at Car Nicobar which had satellite phone and learnt that Malacca was badly hit and there was no news about his family. In the afternoon he came to know that his thirteen-year-old son had been found clinging to the rafters of a church.

The writer had also accompanied them. Astonishingly but Mecifullythe forest and coconut palms remained undisturbed while most of the human habitation had been destroyed. The TSunami had been peculiarly selective in the manner of its destruction. When they reached the mins of the circuit house they found a mound of house hold goods and the director found his suitcase.

The director only took his slides. The director Showed the writer die spot where his house once stood. He told the writer that his wife was an English teacher at a local school, but wanted to leave, the director could not get a transfer. He felt that she could have achieved many things and he had Med to give the opportunity. He pointed to his daughter vinceta’s paintbox but did not pick it up and said “What good will it do? What will it give back?”

The Writer wondered himself, being a husband, father and human being, what he would have done and felt. Would he have chosen to forget the past? He found that the answer, to the question was a matter of expressing the innermost sovereignity of ourselves because nothing remained to cloud our vision. The writer was surprised to see that there wasn’t any hesitation or doubt when the director chose to abandon his wifes and daughter’s belongings. He must have found some comfort in the knowledge of an impersonal effort.

The writer felt that at such moments, words seem to be futile and nothing is of value other than to act and intervene in the course of events. The next day the writer understood that the director had mounted the most singular and most powerful defence he would ever witness. ie. to get involved in one own work.

The Town by the Sea Summary in Kannada 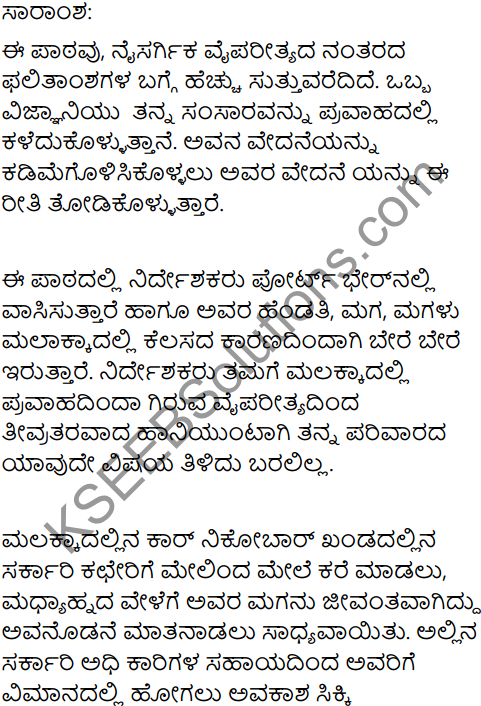 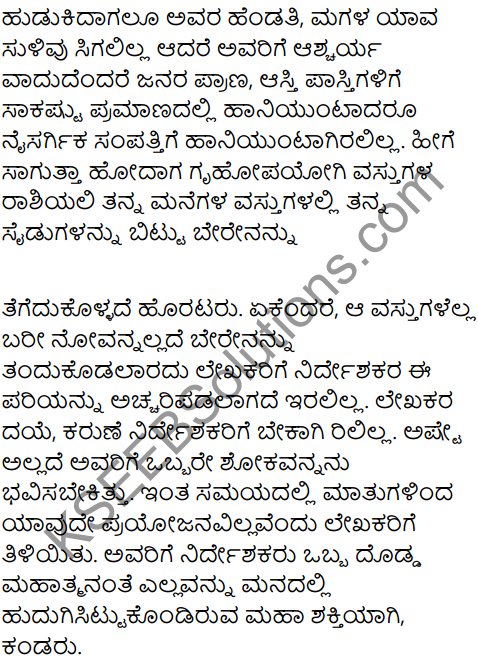 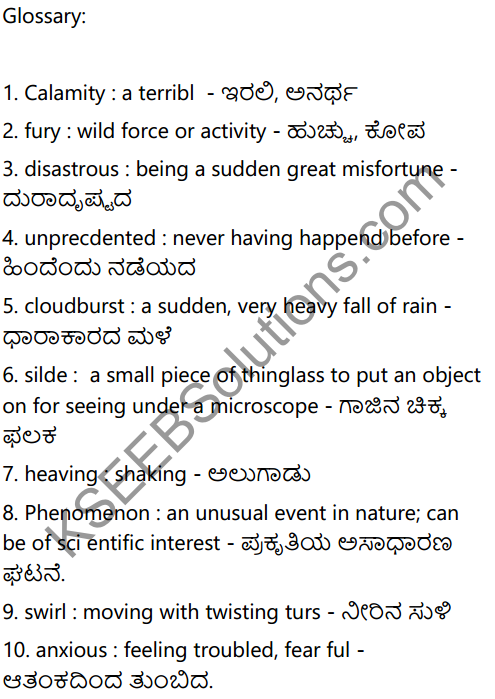 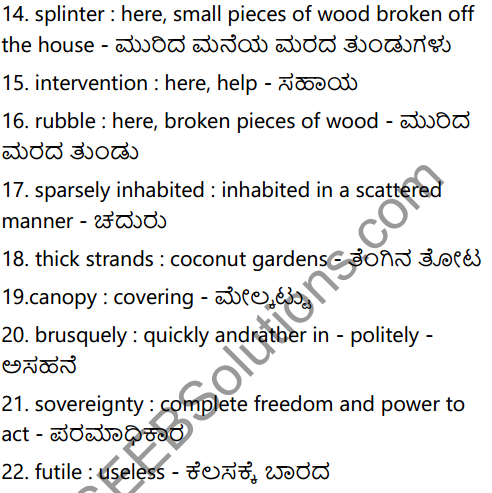 The above furnished information regarding KSEEB Solutions for Class 7 English Chapter 8 The Town by the Sea Questions and Answers is true as far as our knowledge is concerned. If you have any doubts feel free to reach us via the comment section and we will reach you at the soonest possible.