C. Take turns with your partner and ask or answer these questions. Explain to him or her why you think your answer is correct. Quote from the text where ever necessary. Write down your answers.

Question 1.
Explain in your own words how a pilot saved himself.
Answer:
The plane was shot down by the enemy fire and the pilot fell out of the plane before it crashed in a matter of minutes. A parachute, a white structure mushroomed and opened like a flower in the sky and the pilot floated gently down with the wind to the ground and this is how the pilot rescued himself.

Question 2.
The boy saw the plane only after it had been shot (True/Not True)
Answer:
True.

Question 3.
In English, nouns are commonly used as verbs also, Point out to your partner two such verbs in paragraphs 1 and 2.
Answer:

Question 4.
Where was the pilot flying to when his plane was shot?
Answer:
The pilot was flying to Airforce station, Ambala.

Question 5.
Why did the enemy shoot at the boy?
Answer:
The enemy shot at the boy because they saw the pilot handing over a packet to him. They also knew that the packet contains some important information about them.

Question 6.
The sentry had seen the plane crash (True / Not True)
Answer:
Not True

Question 9.
The boy knew what the officer did not know (Thie/ Not True)
Answer:
True.

Question 10.
The commanding officer said some-thing humorously.
Answer:
When the boy, Maqbool said seriously that he had to carry the orders given by the pilot and he also said that he knew the enemy lines, he knew the place where the pilot fell, and also he can guide them to go by a short cut and also informed that the enemies came on foot so that jeeps will be able to surround them and catch them. The instructions given by the boy like a well-trained soldier made the commander humorous and the commanding officer said smilingly, “Instructions noted, Sir, action will be taken”.

Question 12.
A distant voice came to the officer’s ears. Whose voice was that?
Answer:
A distant voice which was lost in the dis¬tant years was the voice of Maqbool’s father who was the winner of P. V.C. in 1971.

Seven examples of the noun clause are given below. Study them and know the grammatical functions Noun Clauses do.

7. “My son will win a medal,” he said. He was certain about that.
He was certain that his son would win a medal. (Complement of the adjective “certain”)
We sometimes say things in (simple) short sentences and sometimes in long (complex) sentences. This is what these seven people are doing here.

The Italicized parts in the long sentences are called Noun Clauses in Grammar.

A. I remember where I have left mv bicycle.
B. This is how they caught the thief with the jewels.
C. Everything depends on what he is going to do.
D. I was listening about his troubles.
E. She was certain that her son would win a prize in high jump event.

Exercise 2.
The Noun clause begins with ‘that ’ or what we may call “Wh Words” Fill in the blanks with appropriate words given in the brackets.
(why; that; whether; where; how; when)
Newspaper

The cloud carries words which can be joined to the prefixes and suffixes in the bubbles. Make as many words as possible by trying out different combinations. Sometimes both a prefix and a suffix can be used to make longer words. Observe how the meaning of the words change after you have added affixes to them. 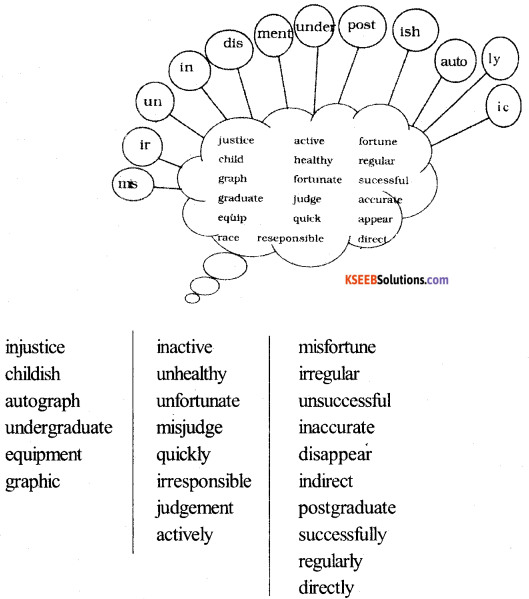 Maqbool Butt received an award for bravery that year. On the Republic day, the President presented the Medal to him. Now, you imagine that you are a reporter to your local newspaper. Write a short report about Maqbool’s bravery.

Write a short note M Maqbool’s bravery Short report about Maqbool’s bravery. Maqbool a small boy ten years old saw the plane shot by enemy fire and the pilot parachute down from the flaming plane. Maqbool without being afraid approached the pilot and offered help. But the pilot wanted to handover some packet to nearby Airstation Ambala.

Maqbool (handed over safely) the secret packet and also gave information about the enemies. One of the enemies who had surrendered shot a bullet. It hit his leg and the blood was dripping from the wound. Even at that instance Maqbool never cried, smiled saying that a soldier never weeps. This shows his bravery and also he is a living model for all the youngsters to become patriots of our nation and also cultivate daring, courage, and bravery.

Question1.
What do you know about Mqbool’s family?
Answer:
Maqbool was the son of a soldier who was awarded for his bravery and died fighting for the nation. His father used to always advice him not to be afraid of the enemy. After the death of his father, Maqbool and his mother used to live together, where the plane crashed.

Question 2.
How did the pilot divert the attention of the enemies from the boy?
Answer:
The pilot handed the packet of papers and crawled away from the boy in opposite direction, the enemy who had seen him gave chase and shot at him. The cartridges fell everywhere and the child ran fast. The enemy gave up and turned their attention to the crawling pilot.

Question 3.
Quote the instances which showed Maqbool’s patriotism towards the nation.
Answer:
When the commanding officer was about to take Maqbool home as his mother was worried about him, he said “ I am Maqbool Butt, son of India. This is my land and these are my brothers. It is here that I was born and nurtured. My father’s blood is mixed with the soil of this land and my mother’s tears water the earth on which our crops grow. My loyalty rests here with my brothers, blood relations of the soil, for we have broken bread on the same land”.

Question 4.
What did Maqbool say when the commander asked him why he was not afraid of the enemy?
Answer:
Maqbool said, his father had told him never to be afraid of the enemy because they can’t do anything if our number is not written on the bullet.

Question 1.
The fiery plane was seen by the
a) Maqbool
b) sentry
c) commanding officer
d) Major
Answer:
a) Maqbool

Question 4.
The boy Maqbool was shot by
a) an enemy
b) Major’s rifle
c) pilot
d) a or c
Answer:
a) an enemy

A Soldier’s Son by Shobha Ghosh About the Author:

After completing her first post-doctoral training at the Biochemistry at VCU medical center she was appointed as an asst, professor in the Department of Internal medicine in 1999 where she is now a professor of medicine. She is also a professor of physiology since 2008.

She has published 48 papers originating from the research performed directly from her laboratory and presented her work at national and international conferences. In recognition of her research endeavors, she received the DOIM faculty award for Distinguished Research in 2004.

She has also published several limited review articles and book chapters. Her expertise is routinely sought by several journals as a peer reviewer and by AHA to grade abstract for the annual scientific sessions.

A Soldier’s Son Summary in English 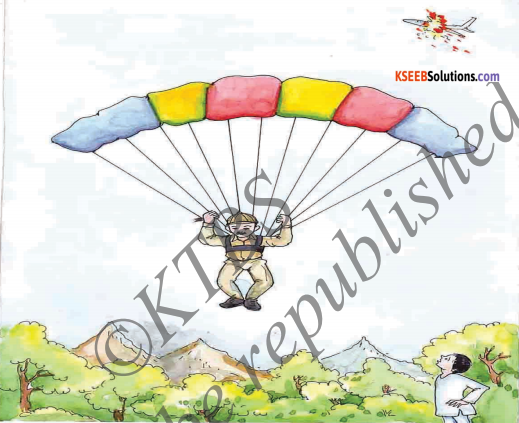 This is a story about bravery, Maqbool, a brave boy of twelve years old saw a plane shot by enemy fire and the pilot, parachute down from the flaming plane.

When the boy asked if he could help, the pilot asked him to deliver a packet of papers to the commanding officer of the army unit at Air force station, Ambala. The boy delivered the packet of papers to the commander and also helped to trace the enemies. Enemy soldiers were surrounded by jeeps and they surrendered. The boy crumpled down all of a sudden as the enemy fire had hit his leg and blood was dripping on the ground. Still, the boy smiled at the officer and said “A soldier never weeps, Sir”.

Maqbool also said that his father who was a P VC awardee said that, a soldier never runs from the enemy and one must face the bullets even when they tear his chest to shreds. Commander admired him saying that he was proud of him and hope someday he will lead the army with the same daring and courage.

A Soldier’s Son Summary in Kannada 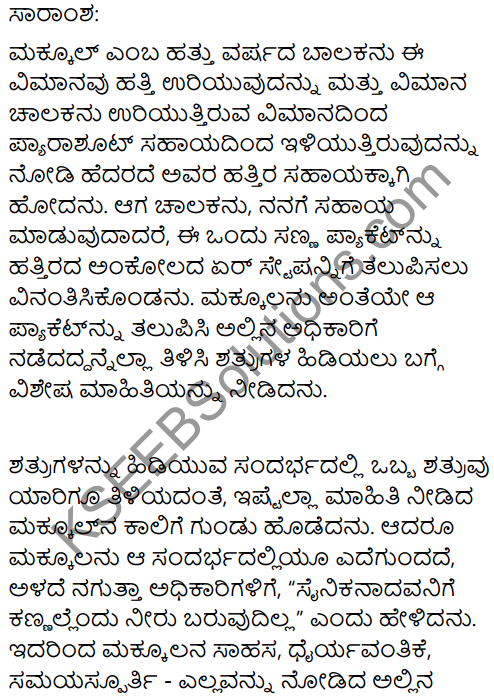 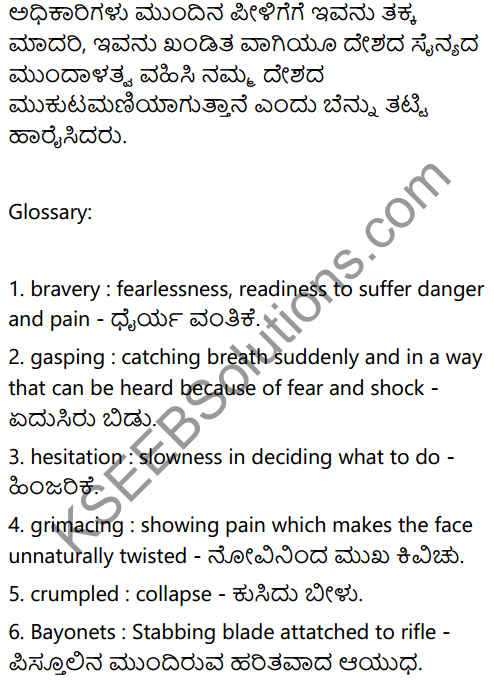 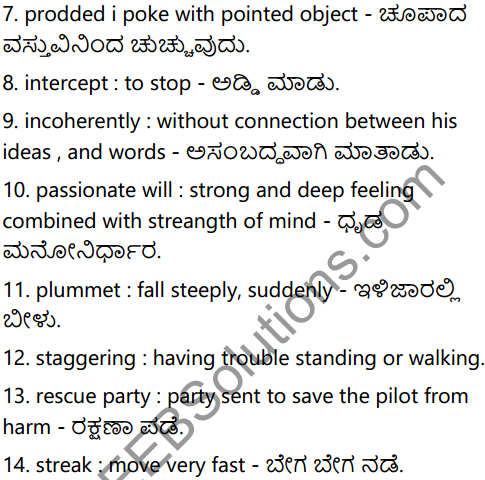 The above furnished information regarding KSEEB Solutions for Class 7 English Chapter 2 A Soldier’s Son Questions and Answers is true as far as our knowledge is concerned. If you have any doubts feel free to reach us via the comment section and we will reach you at the soonest possible.