Question B.
A kind old woman, also a neighbor, heard them. She said a few words to each woman. What do you think she said to each woman?
Answer:
The kind old woman said that little innocent children were like the Gods and he won’t be offended if they eat the Kadubus before the Pooja.

Question d.
How many years had the father spent in bed?
Answer:
The father had spent last two years in bed.

1. Each of the following statements has four alternatives. Choose the right answer and write it Work with your partner to do this.

Question a.
A good way for parents to receive their children returning from school is

Question b.
What had happened when the narrator visited her father on an earlier occasion?

Answer:
she had noticed bugs on his cot.

Question c.
The narrator hesitated even to touch her father because

Answer:
that’s how she had been raised.

2. Read the extract and answer the following questions.

Question a.
‘Who is it?’ he asked as he turned on his side.
Answer:

Question c.
‘It would be so pice if you moved into this town’
Answer:

3. Say whether the following statements are true or false. Rewrite the false statements correctly.

Question b.
This time the father shows his affection for his daughter
Answer:
True

Question c.
The daughter thinks it would be a good idea to ask her mother to clip father’s nails – False
Answer:
Asking mother to do it would be as useless as the mortar weeping on the shoulder of the drum.

Question d.
The young woman becomes emotional thinking of her widowed sister-in-law – False
Answer:
Not that he could not ask my sister-in-law, but perhaps he wanted me to do something for him. The narrator felt elated and did the job carefully.

Question e.
The author decides to take her father to her house – False.
Answer:
The author looked at him helplessly. A look he could not see. She could not reassure him with words either.

4. Answer in one word or a sentence each.

Question b.
What was the caution she had received from her husband before going to visit her father?
Answer:
Not to sit on her father’s bed but pull up a chair and sit. because she would carry bugs back home.

Question d.
What did father say to her finally?
Answer:
“It would be so nice if you moved into this town. I could stay with you.” The father said this finally.

5. Answer the following in two or three sentences each.

Question a.
What was the narrator’s childhood like?
Answer:
From the time the narrator was kept at distance, in the name of discipline, and because of madi, her father’s orthodox way of life. She never had the courage to touch him she had always felt that he was in a state of ritual purity. She was used to slipping into her cocoon.

Question c.
The “mortar” and the “drum” in the proverb refer to two people. Who are they?
Answer:
The narrator’s father and the mother.

Question d.
Why did her father ask her to clip his nails?
Answer:
Asking her mother to do it would be useless, so he asked the narrator to do it.

Question e.
How did the narrator feel while returning from her father’s house?
Answer:
As she returned in the rickshaw, her father’s tender touch haunted her. Tears welled in her eyes and blurred her view of the road.

6. Fill in the blanks with suitable words given in the box.

7. Make the opposites for the following, by adding suitable prefixes given in bracket.
(ir, in, un, mis, dis, im)

8. Complete the following sentences on your own, using the words given in bracket.

While changing active into passive:

Change the voice in the following sentences.

Question b.
The students are planting the trees.
Answer:
The trees are being planted by the students.

Question c.
They help the orphans.
Answer:
The orphans are helped by them

Question e.
He had broken the chair
Answer:
The chair had been broken by him.

1. Answer the following in 5-6 sentences each?

Question a.
Do you sympathize with the father in this story?
Answer:
Father had longed for sons all his life but was left with only his daughters. So I sympathize with him for his unfortunate situation.

2. Supply the missing words in this story:

Long long ago a young man called Shravana kumara lived with his old parents. One morning his father said to him, “Kumara, your mother and I have grown old and blind. We are sorry to teJJ you, that we want to worship God in places of pilgrimage.”

Kumara said, “ No trouble at all, father.” He set to work immediately. He cut a length of bamboo. Ah! This will serve as my shoulder pole,” he said. He hung two baskets at either end of the pole. He seated his parents in it. He carried them on his shoulder to many holy places.

Work with your partner and insert suitable words in the blanks in the passage below.

In this story a Hindu woman tells us about a visit that she made to her father one day. He receives her affectionately. But his affection only brings back to her past unpleasant memoties. She remembers the strict upbringing he had given her. As a child she had longed for his loving words and loving touch. She had never received them. Now, grown old and blind, he longs for her loving words and loving touch. She treats him kindly She feels sorry for him.

The Touch Summary in English 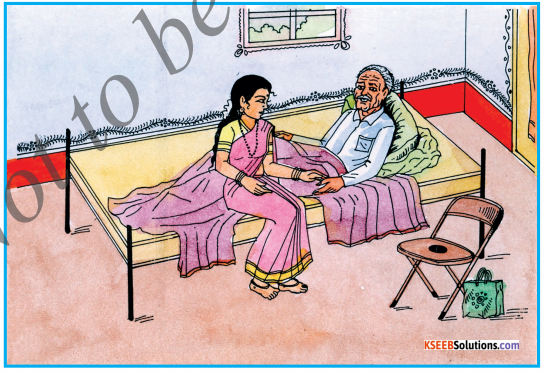 The lesson ‘The Touch’ is a short story by Abburi Chayadevi. She wrote it as ‘Sparsha’ in Telugu. It is translated into English by K. Jayashree Mohan.

Abburi Chayadevi was one of the earliest feminist writers in Telugu. Her family was extremely orthodox and she took to writing as a means of self – expression. She won the Sahitya Akademi Award in 2005.

The story traces the relationship between & father and his daughter in a orthodox Hindu family. The father is now eighty years old arid his daughter is a middle-aged lady. She is a working woman, married to a man of the same town but now residing in another near by town.

The father who was eighty years old, now had poor eyesight. He was otherwise healthy but was weak due to his poor eyesight. He had lost his grown up son and left only with his daughters. His wife was also bed ridden and his widowed daughter – in- law lived with him. His grandsons were working else where.

The daughter had come to visit her father. When the father hears his daughter pulling a chair to sit down he asks her to sit beside him on his bed and grips her hand lovingly and tells her that he had been looking forward to her visit.

The daughter recalls her childhood days when her father had kept her at a distance in the name of ‘madi’ his orthodox way of life. She also discipline. She still feels she hasn’t got over recalls that she was also treated harshly in the name of the diffidence it had created.

Her father had been hed – ridden for two years. She had managed to visit her parents when she her husband had come to vist her mother-in-law. Sitting close to her father she revives the faint memories of her childhood When he stroked her hands lovingly, her eyes welled up with tears.

During her childhood. She had longed for his loving touch, but she was treated harshly. She was still unable to feel free with him. When she had visted him for the first time during his illness, she had picked some bugs. Later her husband had noticed a bug, back home, on their bed and had warned her not to sit close to her father.

She knew that her father longed for his sons. When her brother died she hesitated to face her father due to some unknown feeling of guilt.

Her father pleaded with her that if they moved back to his town he could perhaps stay with them. She looked at him helplessly couldn’t reassure, him with words either. Her father didn’t speak again and silently stroked her hands.

At that moment she felt that her eduction, her job and everything were vain and superficial. While returning back in an autorickshaw, she was still haunted by her father’s tender touch and tears welled up in her eyes.

The Touch Summary in Kannada 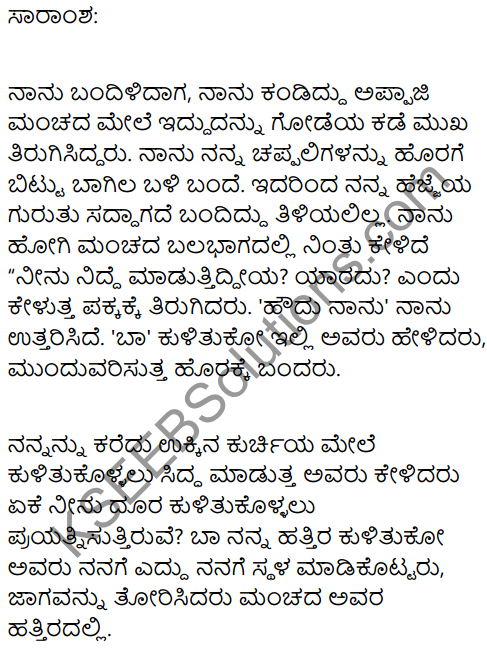 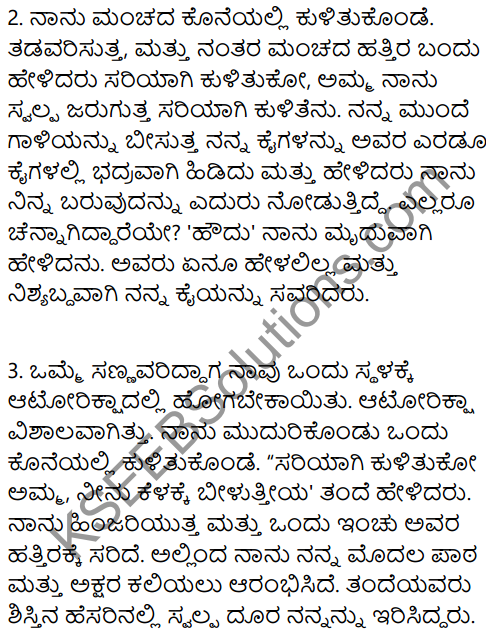 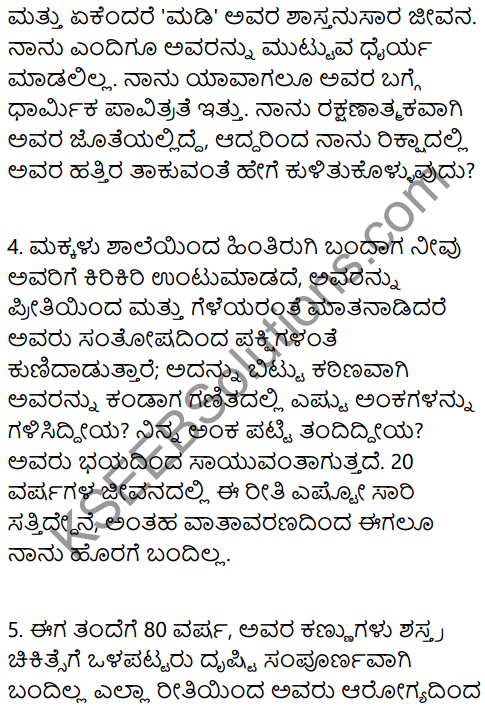 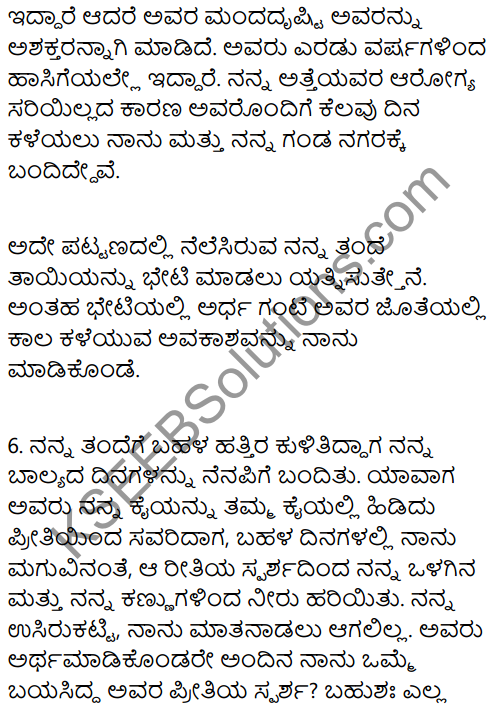 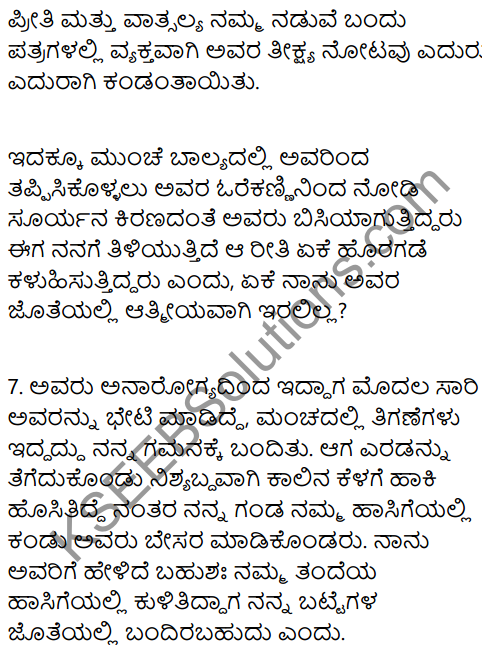 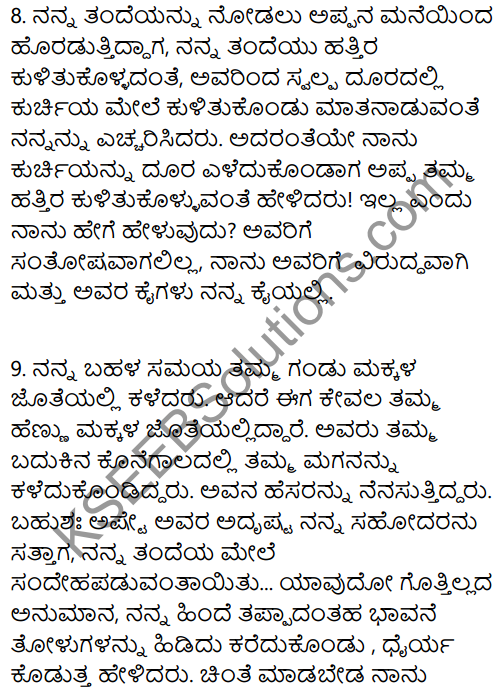 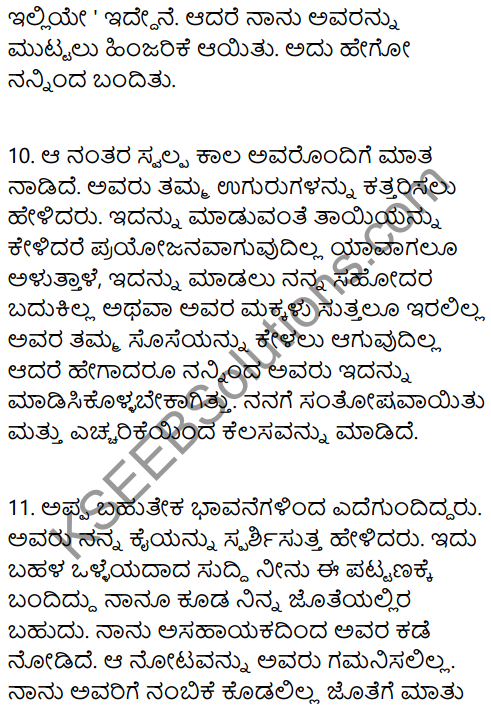 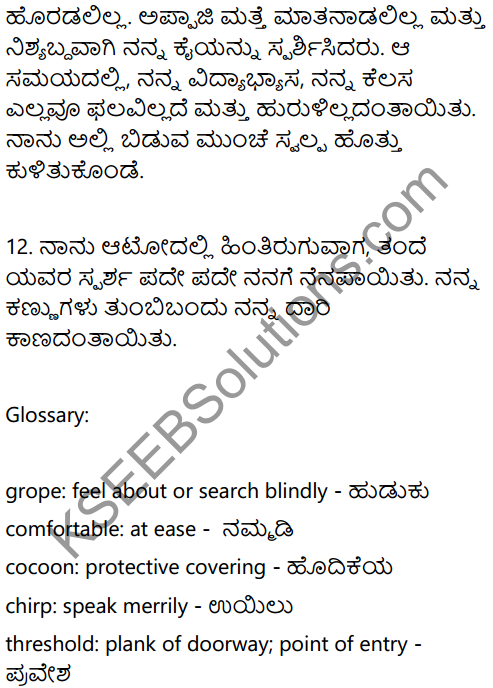 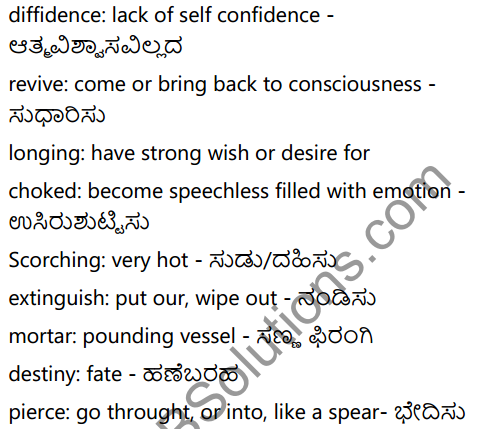 Hope the information shared regarding KSEEB Solutions for Class 6 English Chapter 10 The Touch Questions and Answers is true and genuine as far as our knowledge is concerned. If you feel any information is missing do react us and we will look into it and add it accordingly.