Students can Download English Poem 1 He did it Questions and Answers, Summary, Notes Pdf, KSEEB Solutions for Class 5 English Karnataka State Board Solutions help you to revise complete Syllabus and score more marks in your examinations.

He did it Questions and Answers, Summary, Notes

I. Answer the following questions:

Question 3.
Did the sea think that the young man would be able to make his boat go? How did the young man prove that he could make it go?
Answer:
No, not at all in the beginning, but in the end, the young man made it ready and the sea tells that it floats all right and it’s watertight, but you can’t make it go.

Question 4.
What did the sea want to know when the young man was all set to go (read lines 22-28)
Answer:
The sea wanted to know that whether the young man would be able to overcome the tides.

Question 5.
Why did the young man make the mast?
Answer:
The mast is a tall upright post (wooden log) fixed to carry a boat’s sails.

Question 7.
How did the sea show its greatness of heart?
Answer:
The sea said, “I admit, young man, You have conquered me”.

Question 8.
Do you think the poet is telling a story? Or would you take the poem as a reflection on man’s conquest of the sea?
Answer:
I think that the poem celebrates the discoveries of great explorers of the world and how they have discovered new places and sea routes facing a lot of difficulties.

Question 10.
Who is portrayed as the conqueror, the man or the sea?
Answer:
The man

Question 12.
“And when he saw With considerable awe That Columbus himself Was on one of them”.
Answer:
As the sea saw the continuous fearlessness attitude of Columbus, that the sea started admiring him.

Question 13.
What picture of the sea do you get from the poem?
Answer:
Although the sea is dangerous and formidable, it has a magnanimous heart to admit that man has indeed conquered him.

III. He said, with a show of humility

“ I admit, young man,
You have conquered me”.

Question b.
What aspect of man is described in the poem?
Answer:
Adventurous aspect

He did it Summary In English 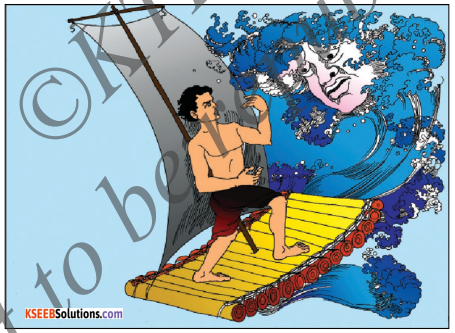 The poem ‘HE DID IT” written by MARY BRITTON MILLER is depicted about the conquering men. we explored the sea and made some adventures. In the midst of the rough sea, navigators took the challenges and made it possible. When man sailed over the sea, he first of all took wooden pieces and joined them and then he saited over the sea. Man took the challenge of the sea and he won over the high waves of the sea. Eventually, man could reach the other end of the world through sea voyage. The sea finally admits and appreciates the valient action of man. The poem also explains how one could can win over any trouble and difficult conditions in life.

He did it Summary In Kannada 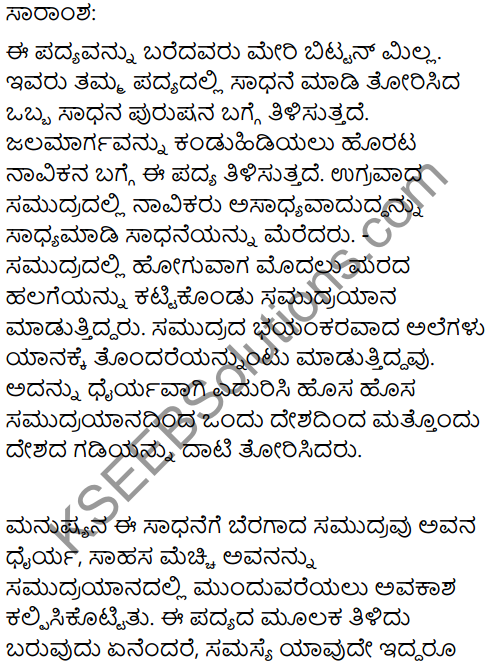 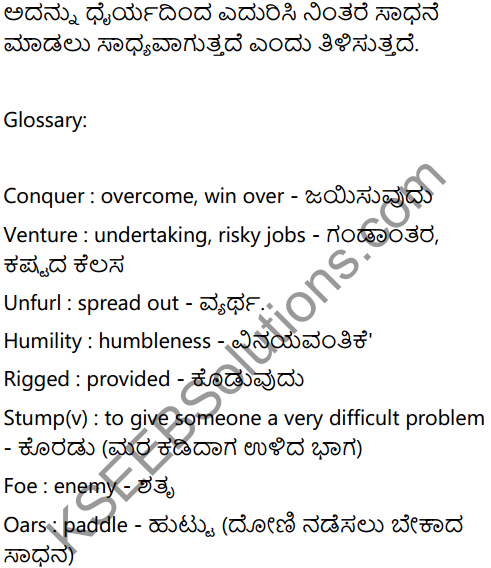