I. Four alternatives are provided for each of the following questions or incomplete statements. Choose the most appropriate alternative and write with its alphabet. ( 8 × 1 = 8 )

Question 2.
The embryo gets nutrition from the mother’s blood with the help of a special tissue called
A) Zygote
B) Utreus only
C) Placenta
D) None of these
Answer:
C) Placenta

Question 3.
One of the main aim of conservation is to try and preserve the ______ we have inherited.
A) Ecosystem
B) Biodiversity
C) Environment
D) Universal
Answer:
B) Biodiversity

Question 4.
Which of the following terms does not represent electrical power in a circuit?
A) I2R
B) IR2
C) VI
D) V2/R
Answer:
B) IR2

Question 5.
By which reaction metal is obtained from metal oxide
A) Liquification
B) Reduction
C) Calcination
D) Roasting
Answer:
B) Reduction

Question 9.
What are autosomes and sex chromosomes?
Answer:
Human cell contain 23 pairs of chromosomes out of 23 pairs, 22 pairs are called autosomes, rest of 1 pair, which determine the sex of child is called sex chromosomes.

Question 11.
Why are we not able to see the things clearly when we come out of a dark room?
Answer:
When we are in dark, pupil size is bigger, as we come out of dark room, its size needs to become smaller. For that time interval the person is unable to see.

Question 13.
In a bakery, baking powder was not added while preparing cake. The cake obtained was hard and small in size. What is the reason for this.
Answer:
Baking powder is used for baking cakes. It contains sodium hydrogen carbonate, which breaks down when heated to form CO2 gas. The CO2 help to make the cakes light and fluffy.

Question 14.
Why do we consider tungsten as suitable material for making the filament of a bulb?
The filament of an electric bulb is usually made of tungsten because of its higher resistivity value (5.56 × 10 Ω m) and its high melting point (3422°C).

Question 15.
Where do plants get each of the raw materials required for photosynthesis?
Answer:

Question 16.
What is combustion?
Answer:
The complete oxidation of a carbon compound leading to the formation of CO2 and H2O is called combustion. 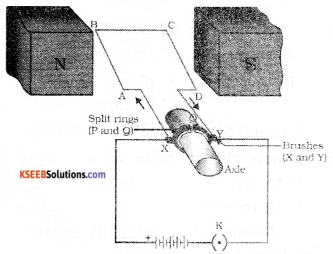 Question 20.
Draw the diagram of the apparatus used in electrolytic refining of copper and label the electrode where pure copper is deposited.
Answer: 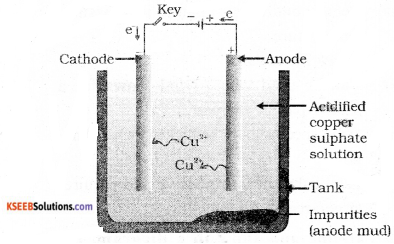 Give an example of redox reaction, naming the substances which are oxidised and reduced.
Answer: 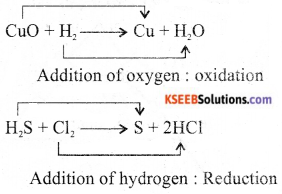 Question 22.
Draw the structure of a neuron and label and following parts.
Answer: 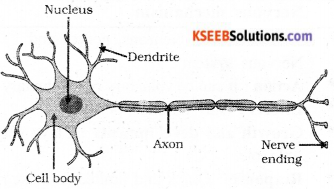 Question 23.
What is short circuit? State one condition that leads to it. Name the device in the household that acts as a safety measure for it.
Answer:
When live wire and neutral wire come in direct contact, a heavy current in the circuit is called short circuiting.
Factor : Insulation of wire is damaged.
Safety device : Electric fuse.

Question 24.
Draw the ray diagram showing the position of the object and image, to get the virtual erect image whose size is enlarged by using convex lens.
Answer: 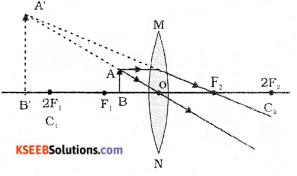 Question 25.
a) Define Resistance of conductor.
Answer:
The property of the conductor to oppose the flow of charges through it.

b) Calculate the equivalent resistance between A and B from the following combination of resistors.
Answer: 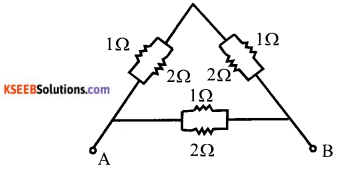 Here 1 Ω and 2 Ω are connected in parallel. So equivalent resistance 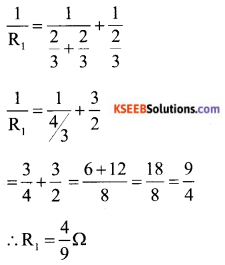 Question 27.
Define and show in a diagram, the following terms relating to concave mirrors.
i) Aperture
ii) Radius of curvature
List any four uses of concave mirror.
Answer:
i) The diameter of the reflecting surface of the mirror is called aperature.

Uses of concave mirror are :

Question 28.
What happens when a solution of baking soda is heated? Write chemical equation for the same. Name the product which is responsible for making the bread or cake spongy and fluffy.
Answer:
When baking soda is heated it decomposes to produce sodium carbonate, water and carbondioxide gas.

CO2 gas produce during the reaction makes the cake or bread spongy and fluffy.

i) Write the name given to bases that are highly soluble in water. Give an example.
ii) How is tooth decay related to pH.
iii) Why does bee – sting cause pain and irratiation?
Rubbing of baking soda on the sting area gives relief. How?
Answer:
i) Alkali, NaOH
ii) Tooth decay starts when the pH of the mouth is lower than 5.5. It can be prevented by using toothpaste which are generally basic.
iii) Bee sting has acid that cause pain and irritation.
Baking soda being alkaline, Neutralises acid and given relief.

a) Why are we not able to see the things clearly when we come out of a dark room?
Answer:
When we are in dark, pupil size is bigger, as we come out of dark room, its size needs to become smaller. For that time interval person is unable to see.

b) Why does the sun appear reddish early in the morning.
Answer:
During sunrise, the light rays coming from the sun have to travel a greater distance in the earth’s atmosphere before reaching our eyes.

Question 31.
a) Define speciation?
Answer:
Speciation is arising of a new species from a sub-population of a species which is geographically or reproductively isolated over a long period of time from the other population of the same species.

b) Mention the sex chromosomes present in human male and human female with the help of a flow chart determine genetically in human beings the sex of the offspring if the sperm carrying x chromosomes fertilizers the egg.
Answer: 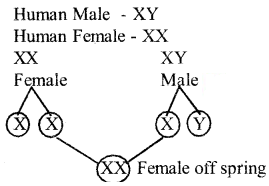 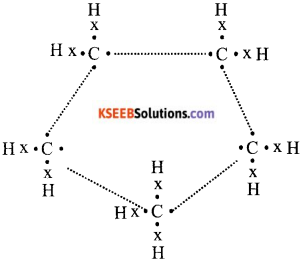 What are addition reaction? What are catalysts? Illustrate with an example.
Answer:
Reactions which involve addition of two reactants to form a single product are called addition reactions. Catalysts are the substances which can change, usually increase the speed of a chemical reaction without being used up in that reaction.

For example, vegetable oils having long unsaturated carbon chains are converted into vegetable ghee by heating them in presence of Nickel, platinum or palladium metals used as catalysts.

a) Which atom is bigger, Na or Mg? Why?
Answer:
Sodium is bigger than magnesium at it has lesser nuclear charge so there is less force of attraction between nucleus and valence electrons and less effective nuclear charge. It is, therefore bigger in size.

a) What are groups and period in the periodic table?
b) Two element M and N belong to group I and II respectively and are in the same period of the periodic table. How do the following properties of M and N vary?
1) Size of their atoms
2) This metallic characters
3) Their valencies informing oxides.
4) Molecular, formulae of their chlorides.
Answer:
a) The vertical columns in the periodic table are called group. The horizontal rows in the periodic table are called periods.
b) 1. M and N belong to the same period but group I and li. Therefore N will be smaller than M as a atomic size is decreases from left to right.
2. M is more metallic than N. Metalic character goes on decreasing from left to right as tendency to lose electrons.
3. Their valencies are 1 and 2 respectively in forming oxides. Valency goes on increasing first and then decreases.
4. MCl, NCl2 are molecules formulae of their chlorides.

Question 35.
Draw the diagram showing the structure of human alimentary canal and label the following parts.
a) The part which stores bile juice
b) The longest part of the alimentary
Answer: 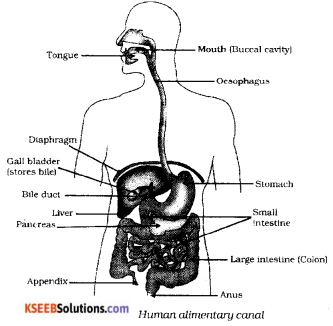 b) Differentiate between roasting and calcination. Explain the two with the help of suitable chemical equations.
Answer:
Roasting : It is a process in which sulphide ore is heated in the presence of oxygen to convert into oxide.
2Zns + 3O2 → 2ZnO + 2SO2

Calcination : It is a process in which carbonate ore is heated in the absence of air to form oxides.

By reduction process Zn can be extracted from its ore.
Reduction : 2ZnO + C → ZnO + CO2

The site of fertilisation in human beings is in the fallopian tube of female reproductive system.