Question 1.
Figure 8.6 shows a capacitor made of two circular plates each of radius 12 cm, and separated by 5.0 cm. The capacitor is being charged by an external source (not shown in the figure). The charging current is constant and equal to 0.15A.
(a) Calculate the capacitance and the rate of charge of potential difference between the plates.
(b) Obtain the displacement current across the plates.
(c) Is Kirchhoff’s first rule (junction rule) valid at each plate of the capacitor? Explain. 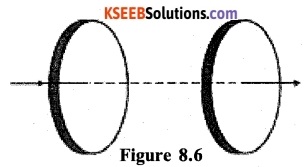 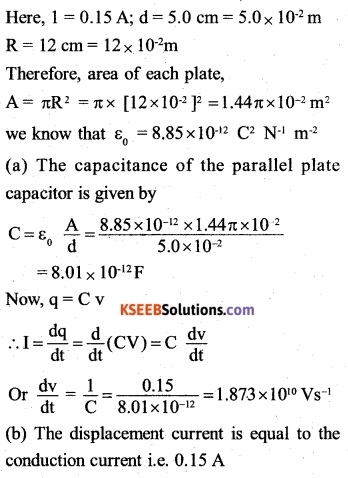 (c) Yes, Kirchhoff’s first law will be valid at each plate of the capacitor, provided the electric current means the sum of the conduction and the displacement currents.

Question 2.
A parallel plate capacitor (Fig. 8.7) made of circular plates each of radius R = 6.0 cm has a capacitance C = 100 pF. The capacitor is connected to a 230 Y ac supply with an (angular) frequency of 300 rad s1.
(a) What is the rms value of the conduction current?
(b) Is the conduction current equal to the displacement current?
(c) Determine the amplitude of B at a point 0 cm from the axis between the plates. 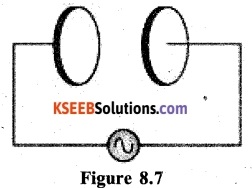 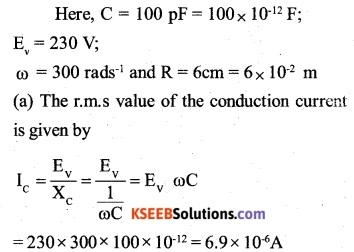 According to modified Ampere’s circuital law, 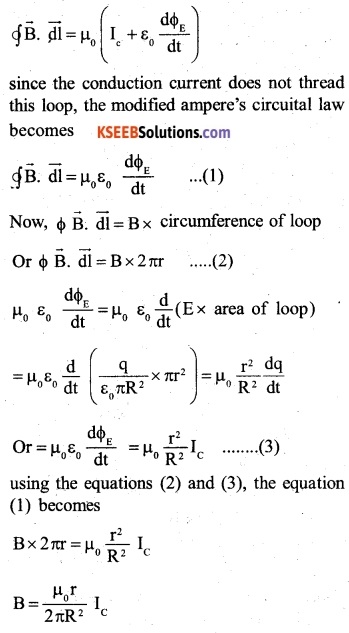 The amplitude of magnetic field at a distance r from the axis of the plates is then, given by. 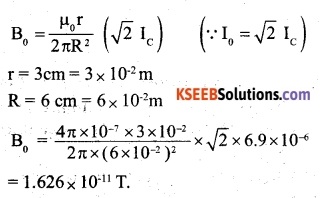 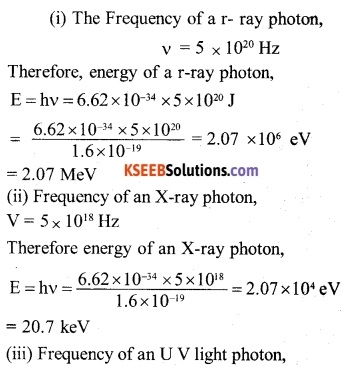 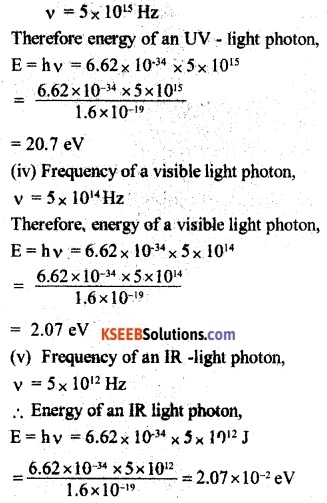 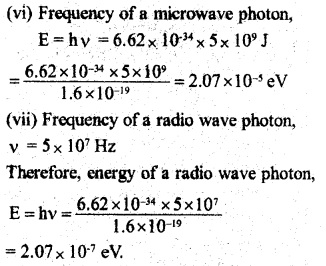 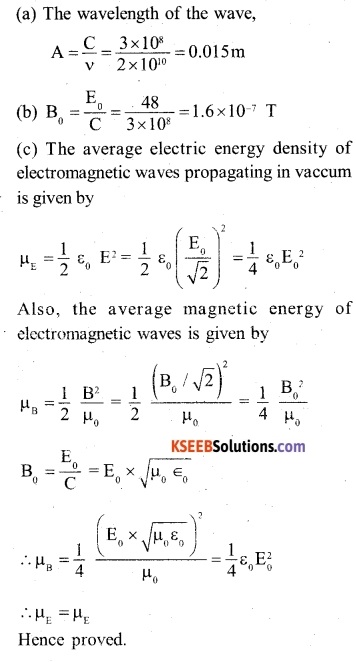 (b) The wavelength of the wave, 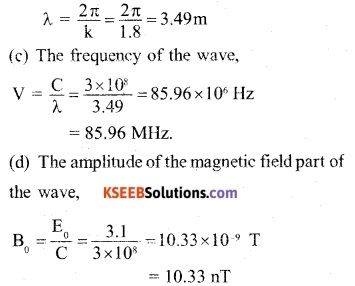 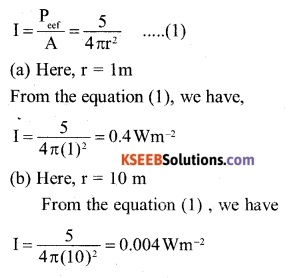 Question 13.
Use the formula λmT =29 cmK to obtain the characteristic temperature ranges for different parts of the electromagnetic spectrum. What do the numbers that you obtain tell you?
Answer: 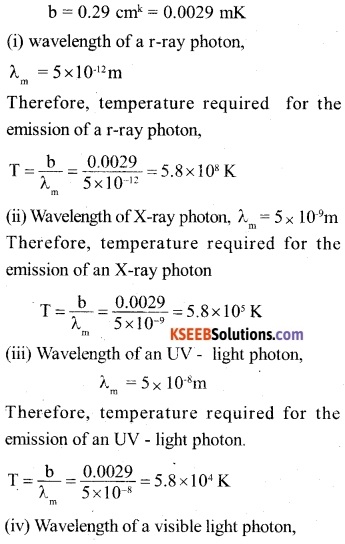 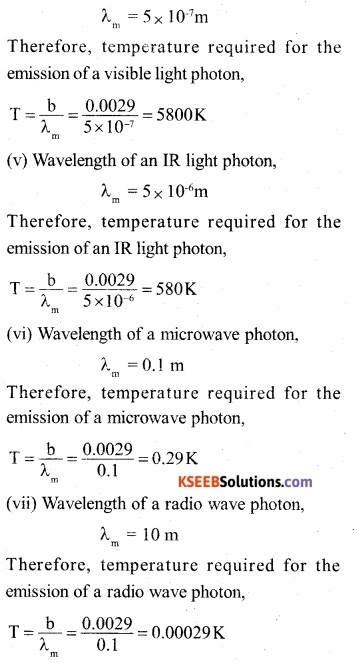 These numbers tell us the order of temperature for obtaining radiations in different parts of the electromagnetic spectrum. At these temperatures, the radiation of the corresponding wavelength in a particular case can be emitted at a lower temperature also, but its intensity will not be maximum.

Question 14.
Given below are some famous numbers associated with electromagnetic radiations in different contexts in physics. State the part of the electromagnetic spectrum to which each belongs.
(a) 21 cm (wavelength emitted by atomic hydrogen in interstellar space).
(b) 1057 MHz (frequency of radiation arising from two close energy levels in hydrogen; known as Lamb shift).
(c) 7 K [temperature mwcirted with the isotropic radiation fHifag nil space-thought to be a reMc of the ‘Mg-baugtrigbi of the universe}.
(d) 5890 A – 5890 A (double lines of sodium}
(e) 14.4 keV {energy of a particular transition in 57Fe nucleus associated with a famous high-resolution spectroscopic method (Mossbauer spectroscopy)].
Answer:
(a) Radiation of wavelength of 21 cm:- It corresponds to radio waves of short wavelength.

(b) Radiation of frequency of 1,057 MHz: It also corresponds to radio waves of short oil. wavelength [or of high frequency].

(c) Temperature of 2.7 K: As obtained in above question this temperature corresponds to the emission of microwaves.

(e) Energy of 14.4 ke V: As obtained in question above, this energy corresponds to X-rays of low energy (Or soft – X-rays),

Question 15.
Answer the following questions:
(a) Long-distance radio broadcasts use short-wave bands. Why?
(b) It is necessary to use. satellites for long-distance TV transmission. Why?
(c) Optical and radio telescopes are built . on the ground but X-ray astronomy is possible only from satellites orbiting the earth. Why?
(d) The small ozone layer on top of the stratosphere is crucial for human survival. Why?
(e) If the earth did not have an atmosphere, would its average surface temperature be higher or lower than what it is now?
(f ) Some scientists have predicted that a global nuclear war on the earth would be followed by a severe ‘nuclear winter’ with a devastating effect on life on earth. What might be the basis of this prediction?
Answer:
(a) The shortwaves (wavelength less than 200m or frequencies greater than 1,500 kHz) are absorbed by the earth due to their high frequency but are effectively reflected by F­layer in the ionosphere. After reflection from the ionosphere, the short waves reach the surface of earth back only at a large distance from the transmitter. For this reason, short waves are used in long distance transmission.

(b) Television signals are not reflected by the ionoshpere. The TV signals from an earth station are reflected back to the earth by making use of artificial satellites.

(c) The earths atmosphere is transparent to visible light and radio waves but absorbs X-rays. Therefore, X-ray astronomy is possible only from the satellites orbiting the earth.

(d) The ultraviolet radiation from the sun is harmful to living cells and plants. The ozone layer absorbs ultra-violet radiation and prevents it from reaching the earth. It also keeps the earth warm by trapping infrared radiation.

(e) The infra-red radiation emitted by the earth are retained by the earth’s atmosphere due to the green house effect and this keeps the earth warm. If the earth didn’t have atmosphere, its average temperature would have been low.

(f) Scientists estimate that in case of global nuclear war, the clouds produced will cover probably whole of the sky. In that case, solar radiation would be prevented from reaching the earth and it will result in, what they call as nuclear winter on the earth. 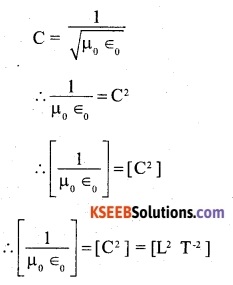 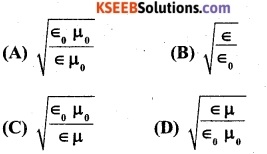 Answer:
The velocity of the electromagnetic waves in free space is given by 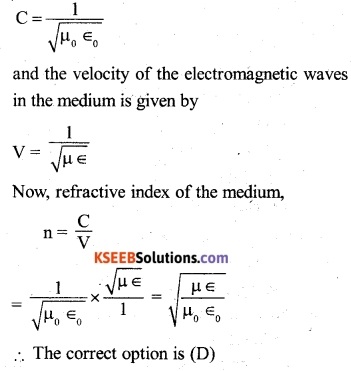 Question 6.
The speed of electromagnetic waves is independent of
(A) Wavelength
(B) Frequencies
(C) Intensity
(D) Medium in which it travels
Answer:
(C) Intensity 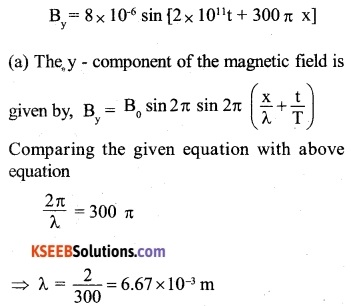 Question 9.
Find the wavelength of the electromagnetic wave of frequency 5x 1019 Hz in free space. Identify the wave.
Answer: 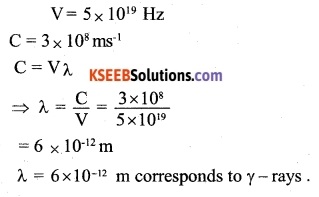