You can Download Chapter 1 Electric Charges and Fields Questions and Answers, Notes, 2nd PUC Physics Question Bank with Answers, Karnataka State Board Solutions help you to revise complete Syllabus and score more marks in your examinations. 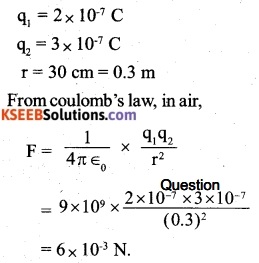 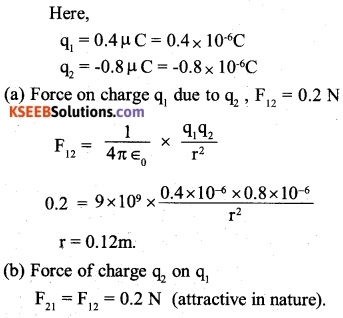 Question 3.
Check that the ratio ke2/Gme mp is dimensionless. Look up a table of Physical constants and determine the value of this ratio. What does the ratio signify?
Answer: 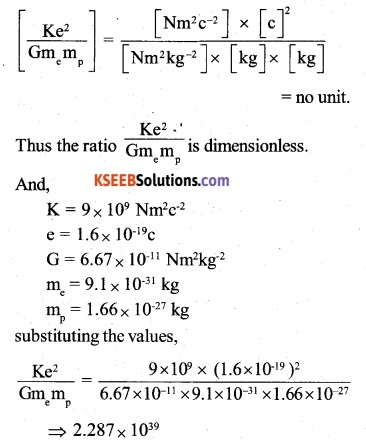 This value represents the ratio of electrostatic force of gravitational force between an electron and a proton.

Question 4.
(a) Explain the meaning of the statement ‘electric charge of a body is quantised’,
(b) Why can one ignore quantisation of electric charges when dealing with macroscopic i.e large scale charges?
Answer:
(a) The magnitude of charge on a proton or an electron (e = 1.6 x 1019c) is called elementary charge. Since protons and electrons are only basic charged particles in a matter, the charge on an object must be integral multiple of ±e(1.6×1019c),
i.e. the charge possessed by an object cannot be a fraction of + e. Mathematically, the charge on any matter must be equal to q = ±ne, where n is an integer.

Hence, the net force on the charge of 1 p C due to the given arrangement of the charges is zero.

Question 7.
(a) An electrostatic field line is a continuous curve. That is a Held line cannot have sudden breaks. Why not?
(b) Explain why two field lines never cross each other at any point?
Answer:
(a) The tangent at a point on the electric line of force tells the direction of electric field changes from point to point. Therefore the line of force are, generally, curved lines. Further, they are continuous curves and cannot have sudden breaks. For if it is so, it will indicate the absence of electric field at the breakpoints

Question 8.
Two point charges qA = 3 µC and qB = -3 µC are located 20 cm apart in vacuum.
(a) What is the electric field at the midpoint O of the line AB joining the two charges?
(b) If a negative test charge of magnitude 1.5×10-9C is placed at this point, what is the force experienced by the test charge?
Answer: 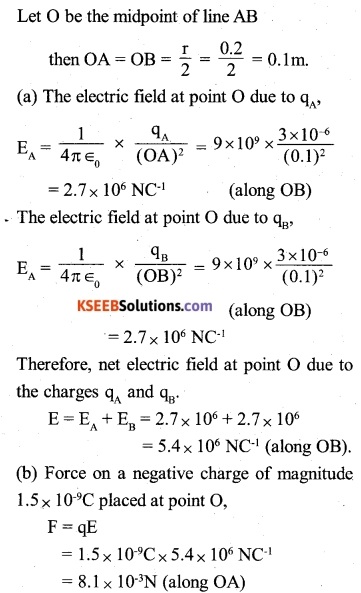 The force on the negative charge acts in a direction opposite to that of the electric field. 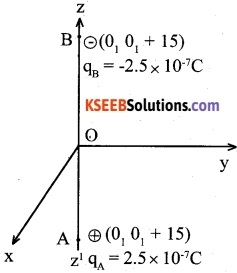 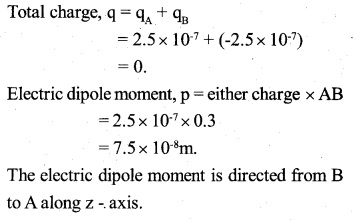 Question 10.
An electric dipole with dipole moment 4×10-9cm is aligned at 30° with the direction of a uniform electric field of magnitude 5 × 104 NC1. Calculate the magnitude of the torque acting on the dipole.
Answer: 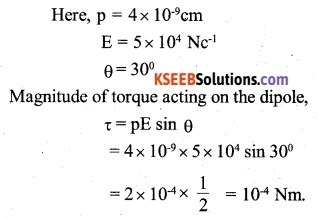 (b) Since electrons are transferred from wool to polythene, there is transfer of mass also. This is because electrons are material particles and possess mass (me = 9.1 x 10-31kg).

Question 12
(a) Two insulated charged copper spheres A and B have their centres separated by a distance of 50 cm. What is the mutual force of electrostatic repulsion if the charge on each is 6.5 x 10-7C ? The radii of A and B are negligible compared to the distance of separation. 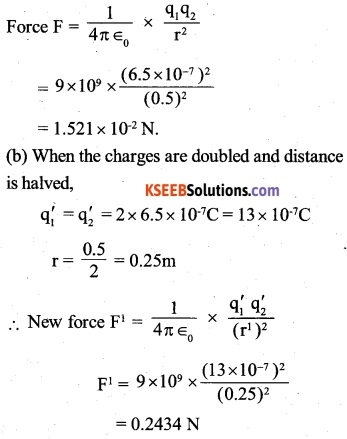 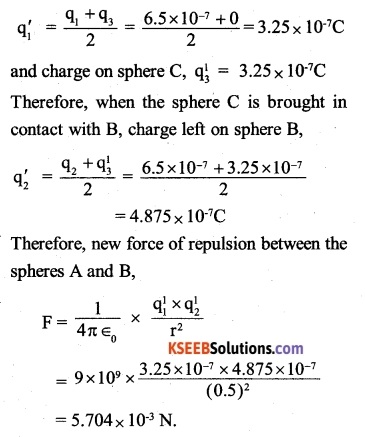 Question 14.
Fig 1.33 shows tracks of three charged particles in a uniform electrostatic field. Give the signs of the three charges. Which particle has the highest charge to mass ratio?

Answer:
Charges (1) and (2) are negative as they were attracted by the positive plate and charge (3) is positive as it is deflected towards negative plate.
Thus charge (3) has highest charge to mass ratio (as it would be a positive figure)

(b) A point charge +10 p C is a distance 5cm directly above the centre of a square of side 10cm, as shown in fig. 1.34. What is the magnitude of the electric flux through the square of 10cm on a side whose plane is parallel to the yz plane?
(b) What is the flux through the same square if the normal to its plane makes a 60° angle with the x-axis ?
Answer: 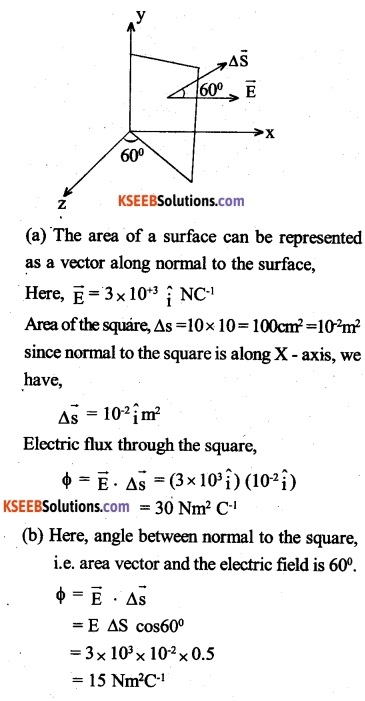 Question 16.
What is the net flux of the uniform electric field of exercise 1.15 through a cube of side 20cm oriented so that its faces are parallel to the coordinate planes?
Answer: 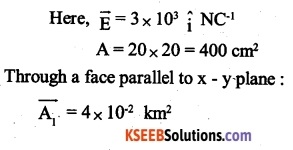 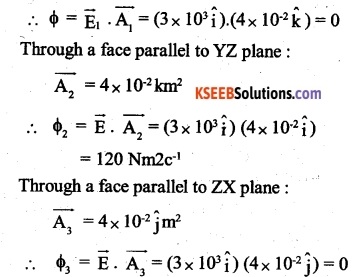 In each plane, there is a set two faces of the cube. Through one face, electric flux enters and through the other face, an equal flux leaves. Therefore, net flux through the cube, 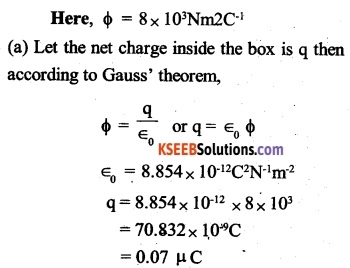 Question 18.
A point charge +10 µ C is a distance 5cm directly above the centre of a square of side 10cm, as shown in fig. 1.34. What is the magnitude of the electric flux through the square? 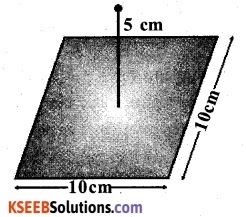 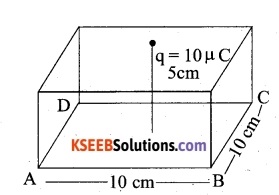 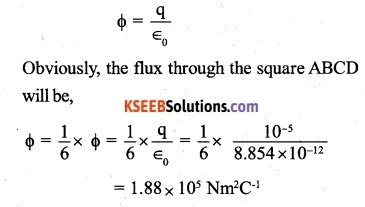 (b) Let q be the charge inside the surface: 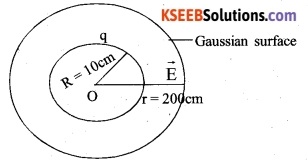 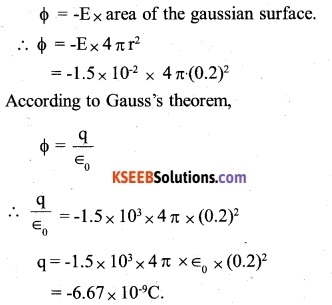 Question 22.
A uniformly charged conducting sphere of 2.4 m diameter has a surface charged density of 80 µ c/m2
(a) Find the charge on the sphere.
(b) What is the total electric flux leaving the surface of the sphere?
Answer: 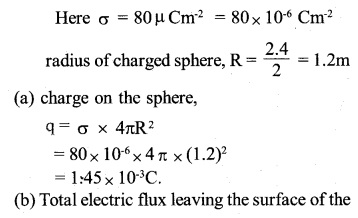 Question 23.
An infinite line charge produces a field of 9 x 104N/C at a distance of 2cm. Calculate the linear charge density.
Answer: 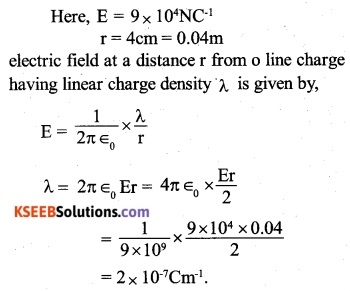 Question 24.
Two large thin metal plates are parallel and close to each other. On their inner faces, the plates have surface charge densities of opposite signs and of magnitude 17x 10-22C/m2. What is \(\vec { E } \)  :
(a) In the outer region of the first plate
(b) In the outer region of the second plate, and
(c) Between the plates?
Answer:
Here, σ= 17 x 10-22 Cm-2
(a) To the left of plates.
The electric field at this region is zero

(b) To the right of the plates
The electric field in this region is zero. 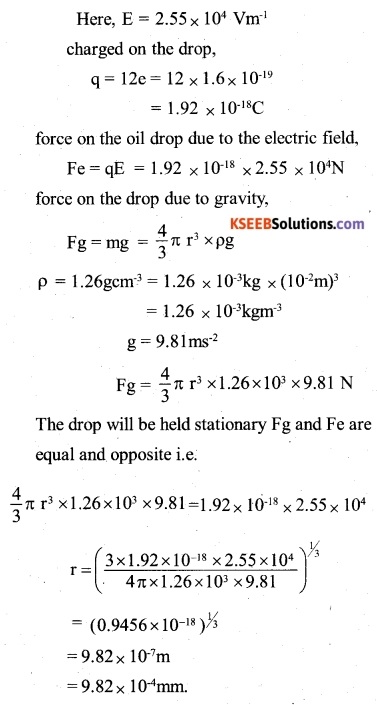 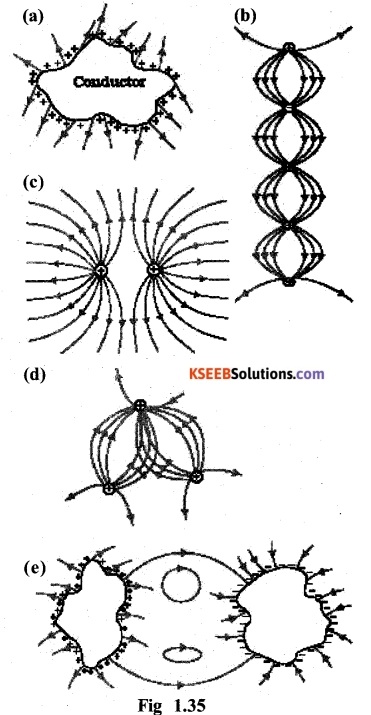 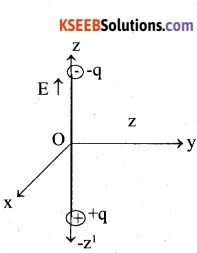 The negative sign has been taken for they reason that dipole moment is along the x negative z-axis.

The electric field is applied along the positive direction of z-axis, such that (along z-axis) In a non – uniform electric field, the force on dipole is given by, 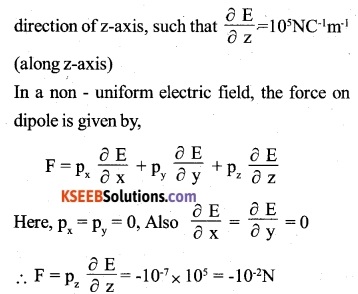 Question 28.
(a) A conductor A with a cavity as shown in Fig. 1.36 (a) is given a charge Q. Show that the entire charge must appear on the outer surface of the conductor.
Answer: 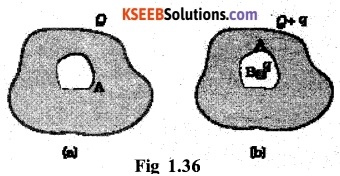 (b) Another conductor B with charge q is inserted into the cavity keeping B insulated from A. Show that the total charge on the outside surface of A is Q + q [Fig. 1.36(b)].
(c) A sensitive instrument is to be shielded from the strong electrostatic fields in its environment. Suggest a possible way.
Answer: 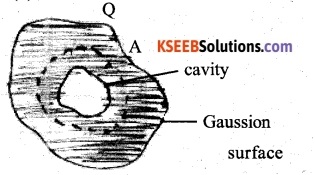 consider the gaussian surface (dotted), it encloses the cavity and the conductor B with ^ charge q inserted in the cavity. 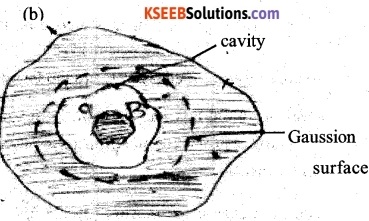 (c) The electric field inside a metallic conductor is zero. Therefore, instrument can be shielded from the strong electrostatic fields by enclosing n it with a hollow metallic structure. 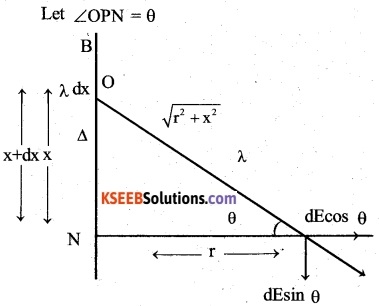 Then charge on the elementary portion AB, dq= λ dn

Therefore, electric field due to the small portion AB at the point P,

The component dE sin θdue to the different small portions, such as AB, will cancel each other. Therefore, effective electric field due to the small portion AB,

On the other hand, neutron is a neutral particle but it is also made of three quarks. For this, the possible composition of the neutron is ‘udd’.

(b) Verify the result for the simple configuration of two charges of the same magnitude and sign placed a certain distance apart.
Ans:
(a) To prove the result, let us assume that the test charge placed at the null point is in stable equilibrium. If it is so, then on being displaced slightly away from the null point, the test charge should return to its position., It implies that if a closed surface is drawn around the test charge, there will be a net inward flux of the electric field through its surface. According to Gauss law, there cannot be any electric flux through its surface as it does not enclose any charge. Hence our assumption is wrong and the test 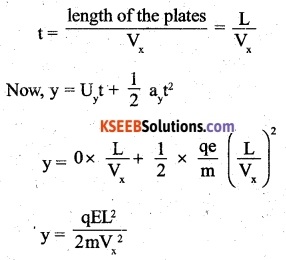 Question 34.
Suppose that the particle in exercise 1.33 is an electron projected with velocity Vx = 2x 106ms1. If E between the plates separated by 0.5 cm is 9.1 x 102Nc_1, where will the electron strike the upper plate? Given, e = 1.6 x 1019C; and Me = 1 x 1031 kg.
Answer:
Suppose that the electron strikes the upper plate at a distance x from the end, where it enters the electric field. Therefore the expression for vertical deflection becomes 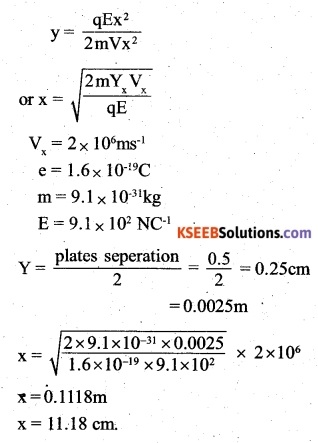 Question 2.
Four charge equals to -Q are placed at the four corners of a square and a charge q is at its centre. If the system is in equilibrium, the value of q is

Question 4.
A charged particle q is placed at the centre O of the cube (ABCDEFGH) of length L. Another same charge q is placed at a distance L from 0. Then, the electric flux through ABCD is.

Question 5.
A thin spherical shell of radius R has charge Q spread uniformly over its surface. Which of the following graphs most closely represents the electric field E (r) produced by the shell in the range o≤ r < ∞ where r is the distance from the centre of the shell ?