Question 2.
Define ‘drift velocity’ of free electrons.
Answer:
An average velocity with which an electron drift in a conductor in a direction opposite to the direction of applied electric field is called drift velocity.

Question 3.
Give an application of cyclotron.
Answer:
The cyclotron is used to produce highly energetic charged particles or ions.

Question 8.
The decay of proton to neutron is possible only inside the nucleus. Why?
Answer:
Unlike neutron, a proton is highly stable. Moreover, the rest mass energy of the proton is less than that of the neutron.

Question 9.
What is ‘depletion region’ in a semiconductor diode?
Answer:
A small region around the junction free from mobile charge carriers is called depletion region.

What is the output of this combination?
Answer:

Question 13.
Define magnetic ‘declination’ and ‘dip’ at a place.
Answer:
North magnetic pole and south magnetic pole respectively.
A vertical plane containing the longitude circle and the axis of rotatioñ of the earth is called a geographic meridian.

Question 15.
Give any two applications of X-rays.
Answer:
Broken bones. Today, x-rays are an integral part of contemporary hospitals and medical centres.
Radiation therapy. X-rays play an important role in the fight against cancer, with high energy radiation used to kill cancer cells and shrink tumours.

Question 16.
What is ‘myopia’? How to rectify it?
Answer:
Nearsightedness or myopia is the inability of the eye to focus on distant objects. The nearsighted eye has no difficulty viewing nearby objects. But the ability to view distant objects requires that the light be refracted less.
Correction: The cure for the nearsighted eye is to equip it with a diverging lens. Since the light is focused in front of the retina, a diverging lens will serve to diverge light before it reaches the eye. This light will then be converted by the cornea and lens to produce an image on the retina.

Question 17.
Draw the diagram representing the schematic arrangement of Geiger-Marsden experimental set up for the alpha particle scattering.
Answer: 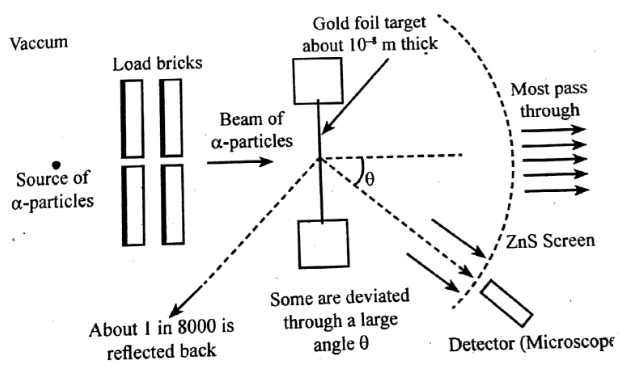 Question 20.
State Ampere’s circuital law and arrive at the expression for the magnetic field near a straight infinite current-carrying wire.
Answer:
The integral of the products of the tangential component of the magnetic field and the element of length ¡n a closed loop is equal to µ0 times the total current passing through the surface.
\(\oint \overrightarrow{\mathrm{B}} \cdot d \vec{l}=\mu_{0} \mathrm{I}\)

Question 21.
What is hysteresis? Define the terms ‘coercivity’ and ‘retentivity’ of a ferromagnetic material.
Answer:
Hysteresis: The phenomenon in which the magnetic induction (\(\vec{B}\)) lags behind with respect to the magnetizing field (\(\vec{H}\)) is called hysteresis.
It occurs when an external magnetic field is applied to a ferromagnet such as iron and the atomic dipoles align themselves with it. Even when the field is removed, part of the alignment will be retained: the material has become magnetized. Once magnetized, the magnet will stay magnetized indefinitely.

Retentivity: The property of the magnetic material to retain magnetism even in the absence of the magnetizing field is known as retentivity or remanence.

Coercivity: The magnetizing field (H) needed to demagnetize the magnetic material completely is known as its coercivity. 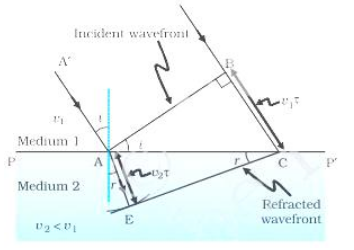 Question 24.
Derive an expression for the half-life of a radioactive nuclide.
Answer:
Let’s find the relation between T½ and the disintegration constant λ. For this, let’s input the following values in the equation 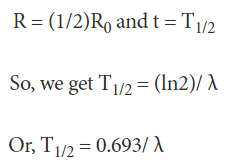 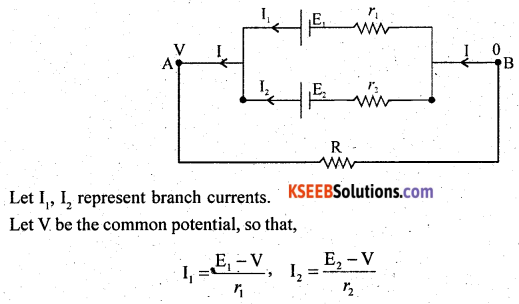 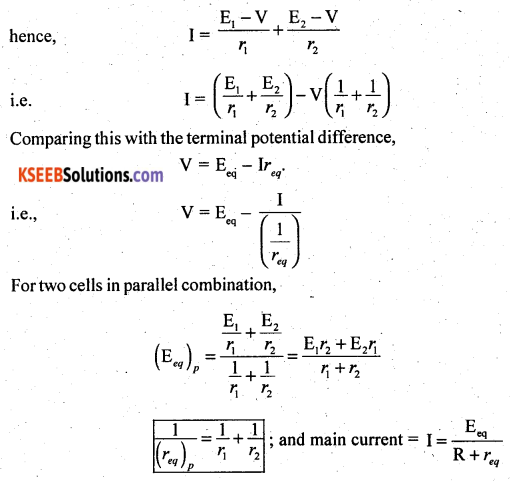 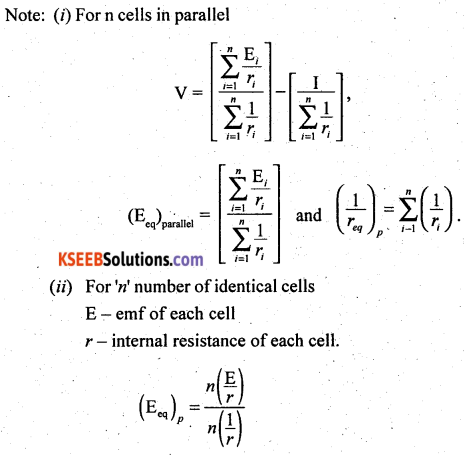 Question 29.
Derive an expression for the magnetic field on the axis of a circular current loop, using Biot-Savart’s law.
Answer: 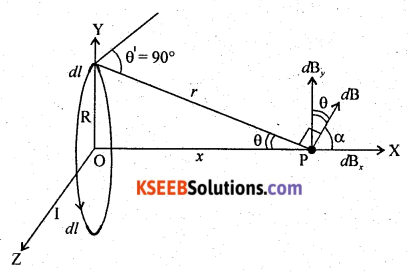 Let R be the radius of a current loop, carrying current I. Let R be a point on the axis of a conductor. Let dB be a magnetic field at P, due to a current element ‘idl’. 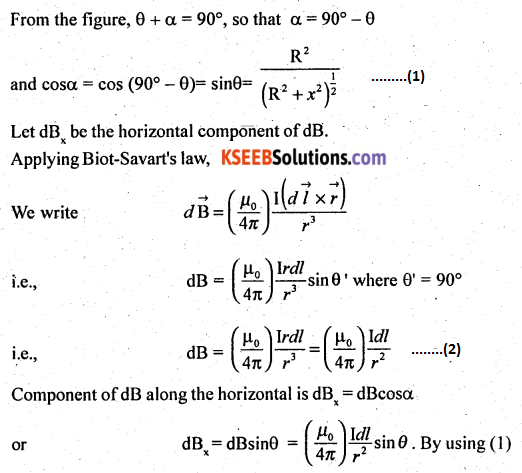 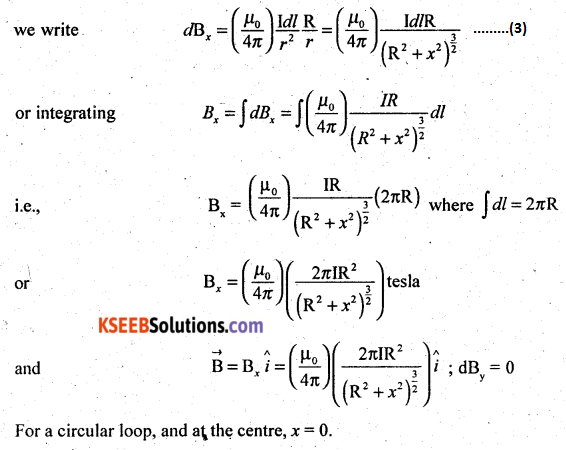 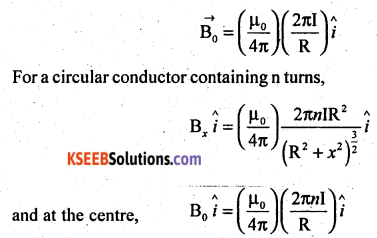 Question 30.
Arrive at an expression for the impedance of a series LCR circuit using phasor diagram method and hence write an expression for the current through the circuit.
Answer:
Consider a resistance R, an inductor of self-inductance L and a capacitor of capacitance C connected in series across an AC source. The applied voltage is given by, 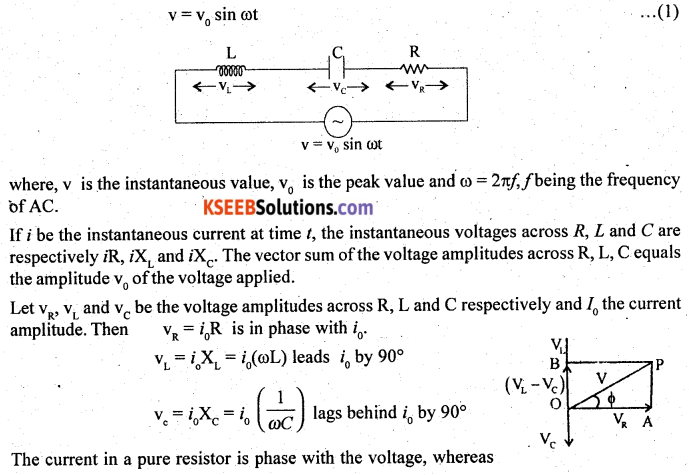 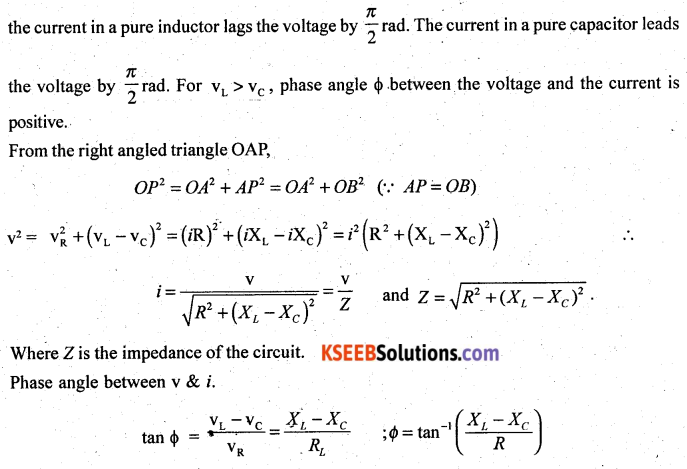 Question 31.
Deduce the relation between n, u, v and R for refraction at a spherical surface, where the symbols have their usual meaning.
Answer: 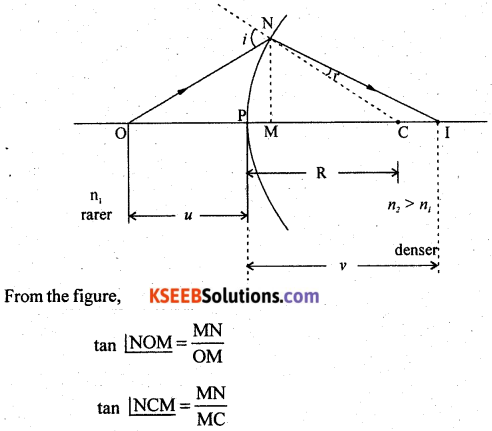 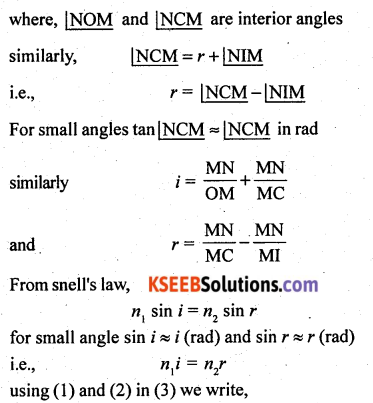 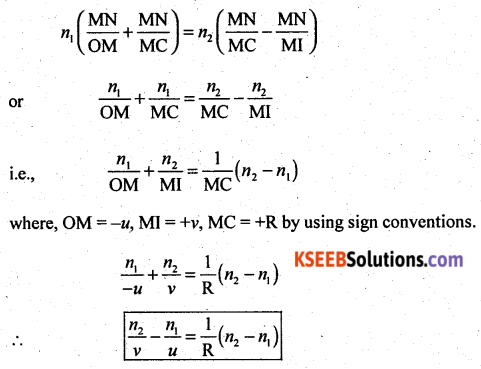 During the second half cycle, diode, D2 will be forward biased while D1 will be reverse biased. The current once again takes the same direction from B to the centre tap. The I/P and the O/P waveforms are shown in fig.
The average DC is \(2\left(\frac{V_{p}}{\pi}\right)\)

Question 33.
Three charges each equal to +4nC are placed at the three corners of a square of side 2 cm. Find the electric field at the fourth corner.
Answer: 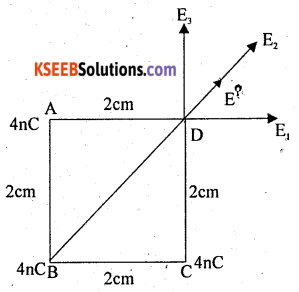 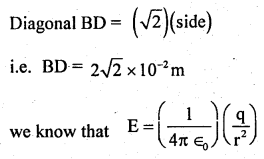 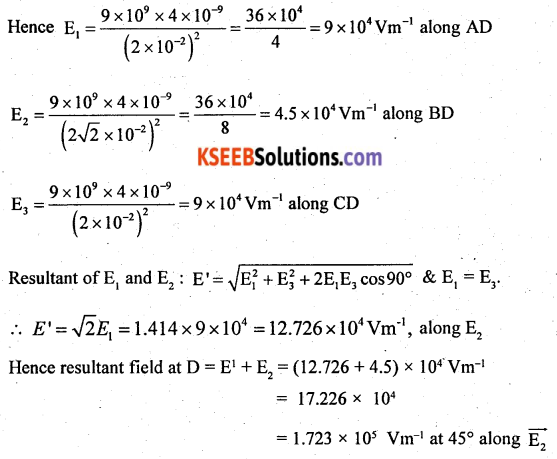 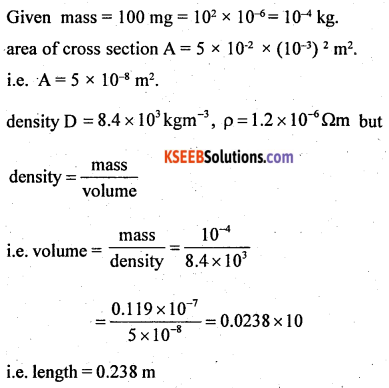 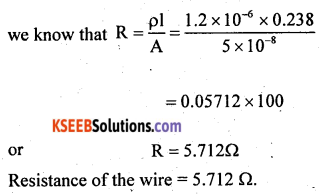 Question 35.
A circular coil of radius 10 cm and 25 turns is rotated about its vertical diameter with an angular speed of 40 rad s-1, in a uniform horizontal magnetic field of magnitude 5 × 10-2 T. Calculate the maximum emf induced in the coil. Also, find the maximum current in the coil if the resistance of the coil is 15 Ω.
Answer: 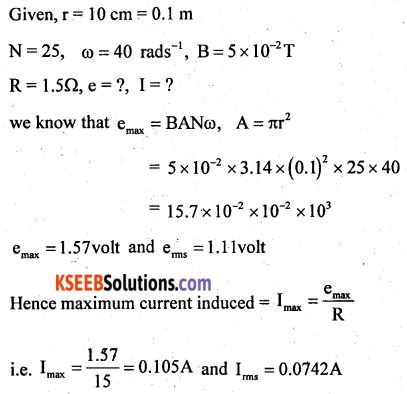 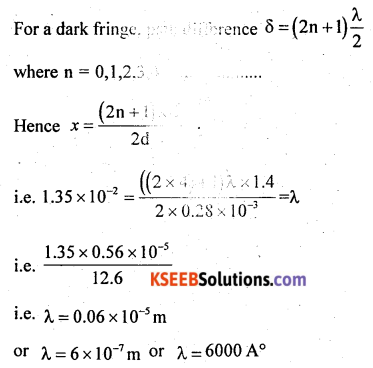 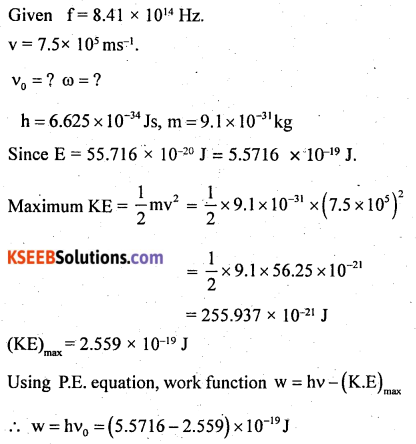 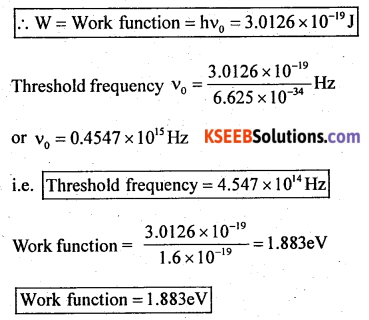