You can Download Chapter 7 The p-Block Elements Questions and Answers, Notes, 2nd PUC Chemistry Question Bank with Answers Karnataka State Board Solutions help you to revise complete Syllabus and score more marks in your examinations.

(ii) Oxidation states
All these elements have 5 valence electrons and require three more electrons to complete octets. However gaining electrons is very difficult as the nucleus will have to attract three more electrons. This can take place only with nitrogen as it is the smallest in size and the distance between the nucleus and the valance shell is relatively small. The remaining elements of this group show a formal oxidation state of -3 in their covalent compounds.

Question 2
Why does the reactivity of nitrogen differ
from phosphorus? i
Answer:
Nitrogen is chemically less reactive. This is because of high stability of its molecule, N2. In N2 the two nitrogen atoms form a triple bond. This triple bond has a very high bond strength, which is very difficult to break. It is because of nitrogens small size that it is able to form pπ-pπ bonds with itself. This property is not exhibited by atoms such as phosphorus. Thus, phosphorus is more reactive than nitrogen.

(ii) Reactivity towards oxygen:
The elements of group 15 form two types of oxides: E2O3 arid E2O5, where E = N, P, As, Sb or Bi. The oxide with the element in higher oxidation state is more acidic than the other. However, the acidic character decreases on moving down a group.

(iii) Reactivity towards halogens:
The group 15 element react with halogens to form two series of salts: EX3 and EX5. However, nitrogen does not form NX5 as H lacks the d-orbital. All trihalides (except NX3) are stable.

(iv) Reactivity towards metals:
The group 15 elements react with metals to form binary compounds in which these metals exhibit-3 oxidation states.

Question 4
Why does NH3 form hydrogen bond but PH3 does not?
Answer:
Nitrogen is highly electronegative as compared to phosphorus. This causes a greater attraction of electrons towards nitrogen in NH3 than towards phosphorus in PH3. Hence, the extent of hydrogen bonding in PH3 is very less as compared to NH3.

Question 5.
How is nitrogen prepared in the laboratory? Write the chemical equations of the reactions involved.
Answer:
An aqueous solution of ammonium chloride is treated with sodium nitrite
NH4Cl + NaNO2(aq) → N2(g) + 2H2O(e) + NaCl(aq)
NO and HNO3 are produced in small amounts. These are impurities that can be removed on passing nitrogen gas through aqueous H2SO4 containing potassium dichromate

Question 6
How is ammonia manufactured industrially?
Answer:
Ammonia is prepared on a large-scale by the Haber’s proceed.

Question 7
Illustrate how copper metal can give different products on reaction with HNO3.
Answer:
On heating with dil HNO3, copper gives copper nitrate and nitric oxide.

Resonating structures of N2O5 are:

Question 11.
Explain why NH3is basic while BiH3 is only feebly basic.
Answer:
NH3 is distinctly basic while BiH3 is feebly basic.
Nitrogen has a small size due to which the lone pair of electrons is concentrated in a small region. This means that the charge density per unit volume is high. On moving down a group, the size of the central atom increases and the charge gets distributed over a large area decreasing the electron density. Hence the electron donating capacity of group 15 elements hydrides decreases on moving down the group.

Question 12.
Nitrogen exists as diatomic molecule and phosphorus as P4. Why?
Answer:
Nitrogen owing to its small size has a tendency to form pn-pn multiple bonds with itself. Nitrogen thus forms a very stable diatomic molecule, N2. On moving down a group, the tendency to form pπ-pπ bonds decreases (because of the large size of heavier elements). Therefore, phosphorus (like other heavier metals) exists in the P4 state.

Question 18.
Why is dioxygen a gas but sulphur a solid?
Answer:
Oxygen is smaller in size as compared to sulphur. Due to its smaller size, it can effectively form pπ-pπ bonds and form O2 (O = O) molecule. Also, the intermolecular forces in oxygen are weak Van dar Wall’s which cause
it to exist as gas. On the other hand, Sulphur does not form M2 molecule but exists as a puckered structure held to gather by strong covalent bonds. Hence it is a solid.

Question 20
Which aerosols deplete ozone?
Answer:
Freons or chlorofluro carbons (CFCS) are aerosols that accelerate the depletion of ozone. In the presence UV radiations, molecules of CFC’s break down to form chlorine – free radicals that combine with O3 to form oxygen.

Step (1)
Sulphur or sulphide ores are burnt in air to form SO2.

This oleum is then diluted to obtain H2SO4, of the desired concentration. In practice, the plant is operated at 2 bar (pressure) and 720 K (temperature). The H2SO4 thus obtained is 96 – 98% pure.

Question 22.
How is SO2 an air pollutant?
Answer:

Question 23.
Why are halogens strong oxidising agents?
Answer:
The general electronic configuration of halogens is np5, where n = 2-6. Thus, halogens need only one more e- to complete their octet and to attain the stable noble gas configuration. Also, halogens are highly electronegative with low dissociation energies and high negative electron gain enthalpies. Therefore, they have a high tendency to gain an election. Hence, they act as strong oxidizing agents.

Question 27
Why are halogens coloured?
Answer:
Almost all halogens are coloured. This is because halogens absorb radiations in the visible region. This results in the excitation of valence electrons to a higher energy region. Since the amount of energy required for excitation differ for each halogen, each halogen displays a colour.

Question 28
Write the reactions of F2 and Cl2 with water.
Answer:

Question 29
How can you prepare Cl, from HCl and HCl from Cl2? Write reactions only.
Answer:
Cl2 can be prepared from HC1 by Deacon’s process

Question 30
What inspired N. Bartlett for carrying out reaction between Xe and PtF6? ‘
Answer:
Neil Bartlett initially carried out a reaction between oxygen and PtFg. This resulted in the formation of a red compound, O+2 [Pt F6 ].

Later he realised that the first ionization energy of oxygen (1175 kJ/mol) and Xe (1170 kJ/mol) is almost the same. Thus, he tried to prepare a compound with Xe and PtF6. He was successful and a red coloured compound, Xe+ [PtF6]- was formed.

Question 33.
How are xenon fluorides XeF2, XeF4 and XeF. obtained?
Answer:
XeF2, X3F4 and XeF6 are obtained by a direct reaction between Xe and F2. The condition under which the reaction is carried out determines the product. 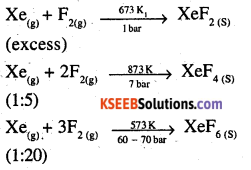 (ii) HF, HCl, HBr, HI – increasing acid strength.
Answer:
HF < HCl < HBr < HI
The bond dissociation energy of HX molecules where X – F, Cl, Br, I, decreases with an increase in the atomic size. Since H – I bond is the weakest, HI is the strongest acid.

(iii) NH3, PH3, ASH3, SbH3, BiH3 – increasing base strength.
Answer:
BiH3 < SbH3 < AsH3 < PH3 < NH3 On moving from nitrogen to bismuth, the size of the atom increases while the electron density on the atom decreases. Thus, the basic strength decreases.

Question 38.
Give the formula and describe the structure of a noble gas species which is isostructural with:
(i) ICl4–
(ii) IBr2–
(iii) BrO3–
Answer:
(i) XeF4 is isoelectronic with ICl4– and has square planar geometry 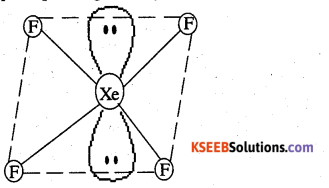 (ii) XeF2 is isoelectronic to IBr2– and has a linear structure 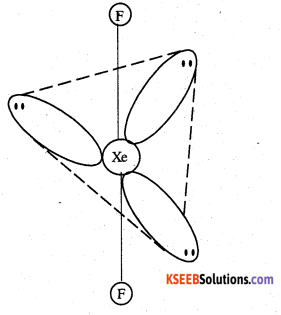 (iii) XeO3 is isostructural to BrO3– and has a pyramidal molecular structure. 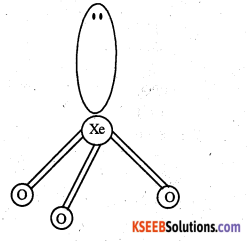 Question 39.
Why do noble gases have comparatively large atomic sizes?
Answer:
Noble gases do not form molecules. In case of noble gases. the atomic radii corresponds to Van der Waa1s radii. On the other hand, the atomic radii of other elements correspond to their covalent radii. By definition, Yan der WaaI’s radii are larger than covalent radii. It is for this reason that noble gases are very large in size as compared to other atoms belonging to the same period.

Question 40
List the uses of neon and argon gases.
Answer:
Uses of neon gas:
(i) It is mixed with helium to protect electrical equipments from high voltage.
(ii) It is filled in discharge tubes with characteristic colours.
(iii) It is used in beacon lights.

Uses of argon gas:
(i) Argon along with nitrogen is used in gas filled electric lamps. This is because Ar is more inert than N.
(ii) It is usually used to provide an inert temperature in a high metallurgical process.
(iii) It is also used in laboratories to handle air sensitive substances.

Question 1.
What is the electronic .configuration of p-block elements?
Answer:
ns2np0 – 5

Question 5.
What are the three allotropic forms of phosphorous.
Answer: