You can Download Chapter 15 Biodiversity and Conservation Questions and Answers, 2nd PUC Biology Question Bank with Answers, Karnataka State Board Solutions help you to revise complete Syllabus and score more marks in your examinations. 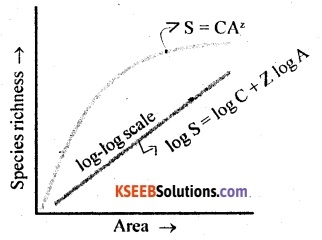 Question 6.
How is biodiversity important for ecosystem functioning?
Answer:

Question 7.
What are sacred groves? What is their role in conservation?
Answer:

Control of floods It is carried by retention of water and prevention of runoff. Litter and humus of plants acts as sponge to retain rainwater. Plants hold soil, so prevents soil erosion. Rainwater does not run – off, so prevents flood as they filter water into soil.

Question 9.
The species diversity of plants (22%) is much less than that of animals (72%). Give explanation.
Answer:

Question 10.
Can you think of a situation where we deliberately want to make a species extinct? How would you justify it?
Answer:
Some species are harmful to human eg: HIV, Small pox vires etc. Such species are not part of any food chains or webs. So, their extinction will not effect ecosystem. And also their extinction can be beneficial to humans. eg:- HIV, small pox vires, plasmodium species etc.

Question 1.
What are endemic species?
Answer:
Those species which are confined to a particular region and are not found anywhere in the world are called endemic species.

Question 2.
Define biodiversity?
Answer:
The totality of genes, species and ecosystem of a given region i.e. the combined diversity at all the levels of biological organisation is called biodiversity.

Question 5.
Amazon rain forest has the greatest biodiversity on earth. List any two hypothesis that are proposed by the biologists to account for the greater biological diversity.
Answer:
In tropics:-

Question 8.
Name the unlabeled areas ‘a’ and ‘b’ of the pie chart representing the global diversity of invertebrates showing their proportionate number of species of major taxa (Delhi 2009) 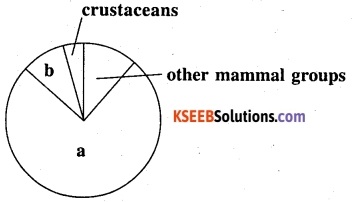 Answer:
(a) Insects
(b) Molluscs

Question 9.
Name the unlabeled areas ‘a’ and ‘b’ of the pie chart representing the biodiversity of plants showing their proportionate number of species of major taxa. (AI2009) 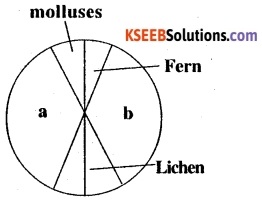 Answer:
(a) Fungi
(b) Angiosperms.

Question 10.
Name the unlabeled areas ‘a’ and ‘b’ of the pie chart representing the biodiversity of vertebrates showing the proportionate number of species of major taxa. (CBSE 2009) 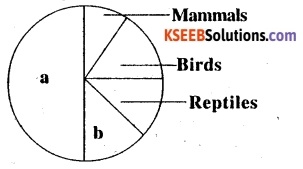 Answer:
(a) Fishes
(b) Amphibians.

Question 11.
Name 2 animals that have become extinct by over exploitation by humans.
Answer:
Steller’s sea cow and passenger pigeon.

Question 1.
Write the scientific name of the plant that yields reserpine. How is genetic variation expressed in this plant?
Answer:

Question 3.
Explain co-extinction.
Answer:
It is a phenomenon in which when a species becomes extinct, the plant and animal species associated with an obligatory manner also become extinct. eg:- When a host fish becomes extinct, its unique assemblage of parasites also faces extinction.

Question 6.
Why does the introduction of alien species into an ecosystem cause loss of biodiversity.
Answer:
The alien species become invasive and resources, so there is a decline in the indigenous species.

Question 8.
When and where the convention on biological diversity (earth summit) was held? While its aim.
Answer:

Question 9.
What are sacred groves? Where are they found in India?
Answer:
Sacred groves are the tracts of forests that are set a side where all the trees and wild life are venerated and given a complete protection.
In India sacred grooves are found in

Question 10.
Name the following
(a) The group of animals that is maximum among vertebrates
(b) The scientist who coined the term biodiversity
(c) the lungs of the planet earth
(d) The region in India where maximum number of amphibians are present.
(e) The most species rich taxonomic group of animals.
Answer:
(a) Fishes
(b) Edward Wilson
(c) Amazon forest
(d) Western ghat
(e) Insect.

Question 2.
What are the characteristics of a stable community?
Answer:

Consequences are
The loss of biodiversity can lead to

Question 2.
How is the ‘sixth episode of extinction ‘of species on earth now currently in progress different from the five earlier episodes? Explain the various causes that have brought about this difference.
Answer:
Five episode of mass extinction have occurred during the past geological history of the earth due to natural phenomena like a continental draft, ice age, hitting of large
asteroids, global warming etc. But the sixth episode of mass extinction is due to human activities by knowingly or unknowingly ie. it is anthropogenic in origin, eg:- Destruction of tropical forests leads to destroy 14000-40000 species every year or 295% of species every hour.
Causes of these extinction may be.

Question 3.
Who proposed the rivet popper hypothesis? Explain the same with reference to ecosystem.
Answer:
This hypothesis was proposed by Paul Ehrlich.

Question 4.
Describe different methods of Ex-situ conservation
Answer:
In ex – situ conservation the threatened species of plants and animals are taken out of their natural habitat and placed in special settings where they can be protected and given special care.

(1) Zoological parks – The places where many animals that have become extinct in the wild, continue to be maintained.

(2) Botanical gardens – The place where many endangered and threatened species of plants are kept. It allows other plants which are used for reference or project purposes. In India there are 35 botanical gardens.

(3) Cryopreservation  – It is the storage of materials at ultra low temperature of -196°C either by rapid cooling or by gradual cooling and simultaneous dehydration at low temperature.

(4) Tissue culture and micro propagation – This method is used for preserving the germplasm and growing a number of plants from small parts of organs.

The endangered species of plants and animals are protected in their natural habitat without disturbing them from their own habitat. It helps in recovering the population in the surroundings where they have developed their distinctive features.