One Mark Questions and Answers

Question 3.
Give any one example for the active component.
Answer:
Transistor.

Question 4.
Give any one example for the passive component.
Answer:
Capacitor.

Question 5.
What does the power rating of a resistor indicate?
Answer:
Power rating indicates the maximum power a resistor can withstand safely.

Question 6.
What is meant by tolerance of a resistor?
Answer:
Tolerance is the percentage variation in the resistance value from the value specified by the colour code.

Question 9.
Draw the circuit symbol of the potentiometer.
Answer:

Question 10.
What does the fourth band of a 4 band colour coded resistor indicate?
Answer:
Tolerance.

Question 11.
What does the fifth band of a 5 band colour coded resistor indicate?
Answer:
Tolerance.

Question 12.
What is an SMD resistor?
Answer:
SMD resistor is an electronic component without connecting wires that are soldered directly onto the surface of printed circuit boards.

Question 15.
Draw the symbol of the electrolytic capacitor.
Answer:

Question 17.
How do you connect a number of capacitors to obtain the maximum capacitance value?
Answer:
In parallel.

Question 18.
Name the only type of capacitor which is polarity sensitive.
Answer:
Electrolytic capacitor.

Question 22.
Define transformers efficiency.
Answer:
The efficiency of a transformer is the ratio of output power to input power.

Question 23.
What is the principle of transformer?
Answer:
Mutual induction.

Question 25.
Draw the symbol of a transformer.
Answer: 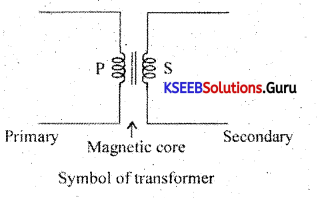 Question 26.
Can a step-up transformer be used as a step-down transformer?
Answer:
Yes, only when the current is small.

Question 4.
Mention four types of materials used as a dielectric between the plates of the capacitor.
Answer:

Question 11.
Write applications of thermistors.
Answer:
Thermistors are used in

Question 14.
What is an inductor? Define the unit of inductance.
Answer:
An inductor is a passive component in which an emf is produced whenever there is a change in the currents flowing through it.

Question 15.
S.I unit of inductance is henry (H).
Answer:
The inductance of a coil is one henry if an emf of IV is induced in it when the current through the coil changes at the rate of one ampere per second.

Question 15.
Write the applications of chokes and relays.
Answer:
Chokes are used in 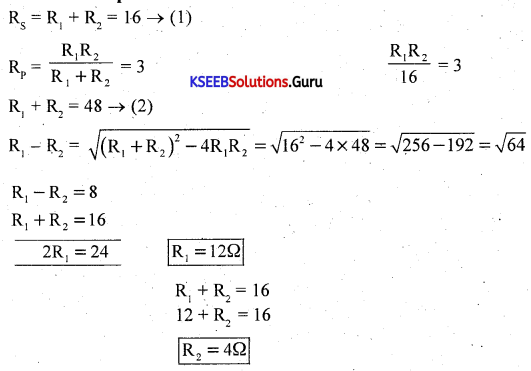 Question 21.
Calculate effective capacitance between A and B in the following figures
(AH values in μF). 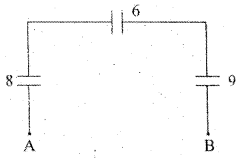 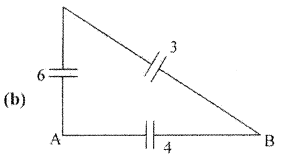 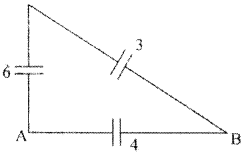 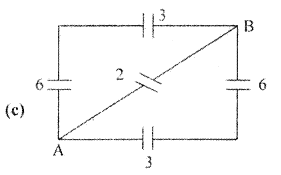 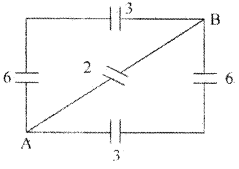 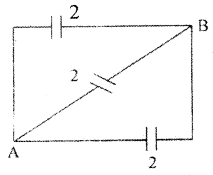 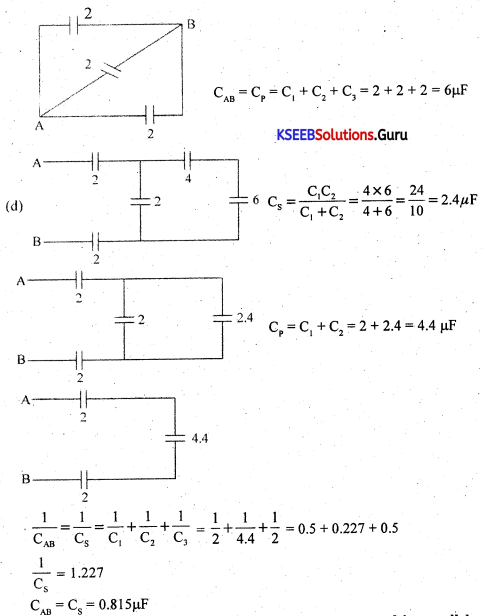 Question 1.
Explain the construction of wire wound resistors. Write any one of its applications.
Answer:
Wire wound resistor is made by winding a wire of known length on a hollow porcelain tube.

Question 2.
Explain the construction of a carbon composition resistor.
Answer:
A mixture of finely divided carbon and a powdered insulating material forms the resistor element. The mixture is moulded into a cylindrical shape. The proportion of the mixture is adjusted to get the desired value of resistance. Metal caps with leads of tinned copper wire are joined to two ends of a carbon-coated resistor for external connection. As the leads are joined axially from the ends, they are called axial leads. The non-conductive material is coated on the resistor element for insulation and mechanical strength. To specify the resistance of the resistor, a band of colours are marked on the body of the resistor.

Question 3.
Explain the principle of a capacitor
Answer:

The capacitance of the capacitor can be increased by

Question 4.
Write the constructional of features of electrolytic capacitor.
Answer:
The electrolytic capacitor has two sheets of aluminium foils separated by a layer of absorbent paper or plastic gauge. The gauge is soaked in a paste of electrolyte of borax or phosphate. They are rolled up and placed in a cylindrical aluminium container. The inner foil acts as the positive plate and the negative terminal is attached to an aluminium container that contacts the outer foil.

After assembling, a DC voltage is applied to the capacitor terminals oxide on the surface of the positive plate next to the electrolyte. The oxide layer acts as the dielectric. As the oxide layer formed is extremely thin which acts as a dielectric material, these capacitors have a large capacitance value. An electrolytic capacitor is polarity sensitive. If connected wrongly, gas forms within the electrolyte and the capacitor may be damaged due to gas formed may lead to an explosion. Hence electrolytic capacitors are polarity sensitive.

Their capacitance value ranges from 1 pF to 0.01 pF with a voltage, rating of 50V to 10KV. Electrolytic capacitors are suitable for high-frequency applications and in radio frequency and microwave systems.

Question 5.
Derive an expression for the equivalent capacitance of two capacitors connected in series.
Answer:

In a series combination, the capacitors are connected end to end. The charge on each capacitor is the same and the emf of the cell equals the sum of voltages across the three resistors. Consider three capacitors C1, C2, C3 connected in series. 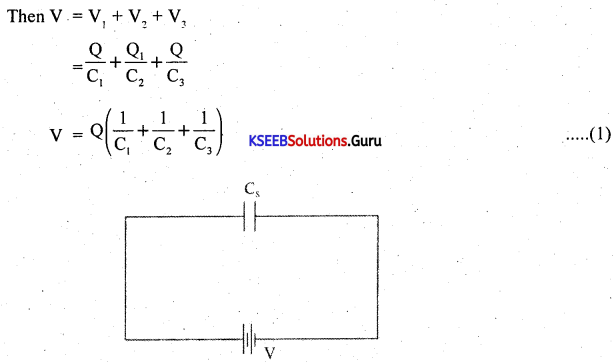 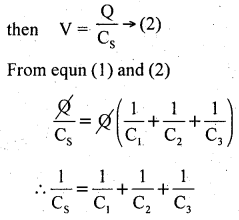 The reciprocal of the effective capacitance of capacitors in series is the sum of reciprocals of individual capacitances. 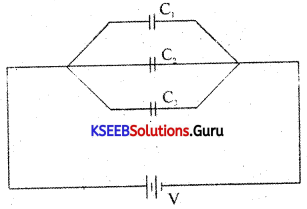 Ferrite core inductors are used as filter chokes and in TV receivers.

Iron core inductors are used mainly in audio frequency applications and as filters in DC power supplies and in radio and TV receivers.

Question 8.
Explain the construction and working of the loudspeaker.
Answer:
A loudspeaker is a transducer that changes electrical energy into sound waves of varying pressure. 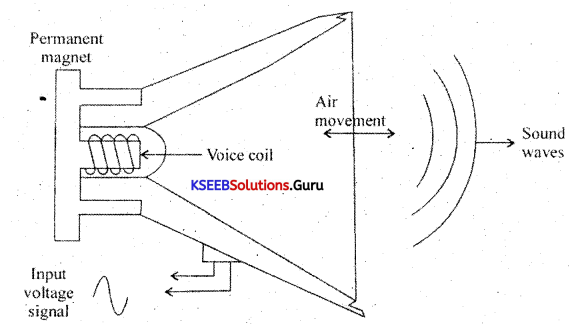 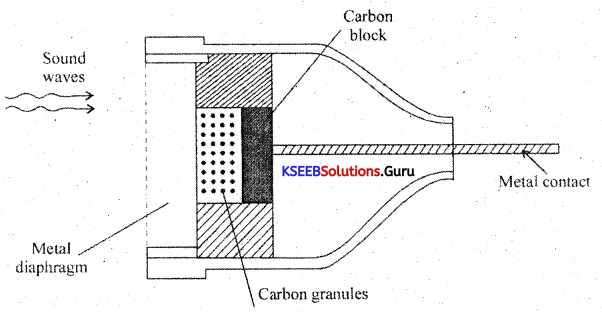 Question 10.
A stepdown transformer having a power output of 10KW and an efficiency of 90% reduces the voltage from 11KV to 220V. Calculate (i) the number of turns in the primary if the secondary has 100 turns and (ii) the current in the primary.
Answer: 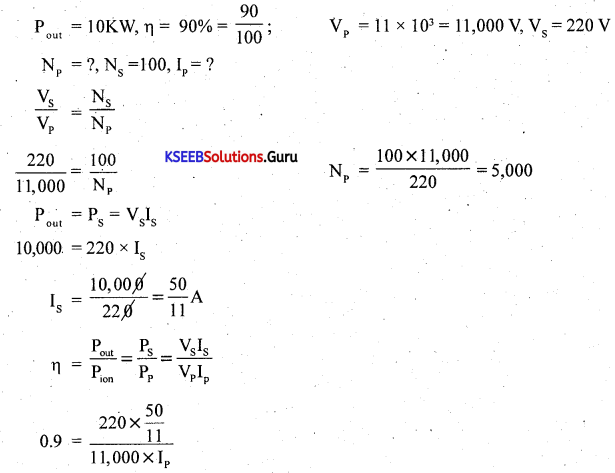 Question 13.
Calculate the load current and load voltage in this transformer circuit. 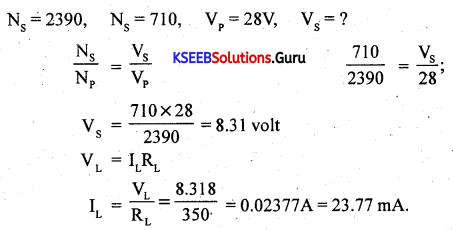