Question 2.
Ogives can be helpful ¡n locating graphically the
(a) Mode
(b) Median
(c) Mean
(d) None of these
Answer:
(b) Median

Question 4.
It is an agricultural allied activity.
(a) Poultry
(b) Cottage industry
(e) Tourism
(d) Small industry
Answer:
(a) Poultry

Question 5.
The state in India popularly known as bGodis Own Country”.
(a) Kerala
(b) Goa
(c) Andhra Pradesh
(d) Kamataka
Answer:
(a) Kerala

Question 9.
Investment on education is considered as one of the main sources of __________.
Answer:
human capital

Question 15.
What is agricultural marketing?
Answer:
It refers to the process of assembling, storing, processing, grading, packing and distributing the agricultural products throughout the country.

Question 17.
Write the differences between census and sample survey.
Answer:

Question 28.
How infrastructure facilities have been classified?
Answer:

In our daily life. we face various forms of scarcity. The queues at the railway booking counters. overcrowded buscs, heavy traffic on roads, the rush to get a ticket to watch a movie of a popular film actor or actress. arc all the manifestations of scarcity. We face scarcity because the things that satisfy our wants are limited in availability.

Question 31.
Briefly explain the sampling errors.
Answer:
Random sampling is where the individual units from the population (samples) are selected at random. For instance, the government wants to determine the impact of the rise in petrol price on the household budget of particular locality. For this. a representative (random) sample of 30 household has to be taken and studied. The naines of all the 300 households of that area are written on pieces of paper and mixed well, then 30 names to be interviewed are selected one be one.

In the random sampling. ever indi idLial lias an equal chance of being selected and the individuals who are selected are just like the ones ho are not selected. In the aboe example. all the 300 sampling units of the population got an equal chance of being included in the sample of 30 units and hence the sample. such drawn, is a random sample. This is also called lottery method, The same could be done using a random number table also

Question 32.
Calculate the correlation coefficient between X and Y and comment on their relationship.

There is a perfect positive corelation betveen the values of X and Y.

Question 33.
Explain the features of index number.
Answer:
The following are the characteristics or features of index numbers:
(a) Index numbers are specialized averages: These are ahavs considered as specialized averages. An average is a single figure representing a group of figures. To obtain an average. the items must be comparable. Index numbers are also one type of averages which show in a single figure. the change in two or more series of different items that can be expressed in different units

Question 34.
The yield of Rice per acre for ten districts of a state are as under 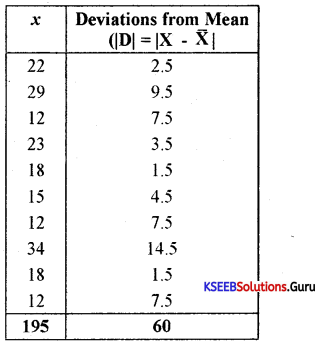 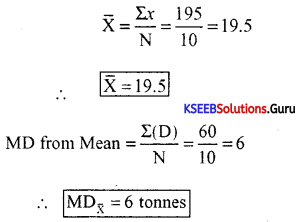 Question 35.
What do you understand by the ‘drain of Indian wealth’ during the colonial period?
Answer:
The most important feature of Indias foreign trade during British rule was the generation of a large export surplus. That means Indias exports exceeded its imports. It resulted in a disadvantage to the country canon

The essential commodities were not made available to Indians as they were exported to Britain in large quantities ignoring domestic needs.

The export surplus (value of exports being greater than the value of imports) was used to make payments for the expenses incurred by an office set up by the colonial government in Britain. expenses on war, again fought by the British Government and the import of invisible items. This is known as Drain of Indian ea1th.

Question 36.
Growth with equity is one of the objectives of planning. Justify.
Answer:
Growth with equity is one of the objecties of planning. A country can have high economic growth. the most modern technology deeloped with in the country itself and still have most of its people living in poverty. It is important to ensure that the benefits of economic prosperity reach the poorer sections as well instead of being enjoyed only by the rich. So. in addition to growth. modernization and self-reliance, equity is also important.

Every Indian should be able to meet his or her basic needs such as food, a decent house, education and health care and so inequality in the distribution of wealth should be reduced,

Question 37.
Briefly explain the background of economic reforms in India.
Answer:
There was a financial crisis which persisted since 1980. Wc know that to introduce various policies, the government has to generate funds from various sources like taxation, running public sector enterprises etc. When the expenditure is more than the income, the government takes loans to balance the deficit from banks and also from people within the country and from international banks,

The various development policies require huge finance. But there was scarcity of funds. Even though the revenues were very low, the government had to overshoot its revenue to meet the challenges like unemployment, poverty and population explosion. The continued spending on development programmes of the government did not generate additional revenue. At the same time, the government could not generate funds internally. When the government was spending a large share of its income on areas which do not provide immediate returns, there was a need to use the rest of its revenue in a highly efficient manner, The incomc from public sector undertakings was also not very high to meet the growing expenditure.

Further, the foreign exchange. borrowed from other countries and international banks was spent on meeting consumption needs, No sincere efforts were made to reduce expenditure and to increase our exports.

During late 1980’s government expenditure exceeded its income. Prices of many essential goods increased. Imports grew at a very large extent. Foreign exchange reserves declined considerably and the same fall short to finance our imports for more than two weeks, There was shortage of funds even to pay interest to international lenders and at the same time no country or international bank was ready to lend any more to India.

At this situation. India approached the International Bank for Reconstruction and Development and International Monetary Fund and reccvcd seven billion dollars as loan to manage the crisis.

To avail loans, these international banks expected India to liberalise and open up its economy by removing restrictions on the private sector, reduce the role of go’ernnient in many areas and remove trade restrictions between India and other countries.

India had to agree to these conditions of IBRD and IMF and announced the new economic policy which included liberalization, privatization and globalization.

Question 39.
Briefly explain the state of infrastructure in rural India.
Answer:
Majority of people in India live in rural areas, In spito of so much of technological progress in the world, rural women are still using bio-fuels like agricultural waste, dried dung and fire wood to meet their eneigv requirement. Thc’ have to walk long distances to bring fuel, water and other basic needs.

According to the latest estimates. in rural India only 56% of households have electricity connection and 43% still use kerosene. About 90% of the rural households use bio- fuels for cooking. Tap water availability is limited to only 24 % rural households. About 76 % of the population drinks water from open sources like wells. tanks. ponds, lakes, rivers, canals etc. Access to improved sanitation in rural areas only 20 %.

Question 40.
Write a note on the Great Leap Forward campaign of China.
Answer:
The Great Leap Forward’was initiated in 1958 by the Communist Party of Peoples’ Republic of China. After the establishment of people’s Republic of China under one party rule, all the critical sectors of the economy, enterprises, and lands owned and operated by the individuals were brought under government control.

The Great Leap Forward campaign aimed at industrializing the country on a massive scale. People were encouraged to set up industries in their backyards. In rural areas, communes were started. Under commune system, people collectively cultivated lands. ¡n 1958, there were 26,000 communes covering almost all the farm population.

The Great Leap Forward campaign met with many problems. A severe drought caused havoc in China killing about 30 million people. When Russia had conflicts with China, it withdrew its professionals who had earlier been sent to China to help in the industrialization process. 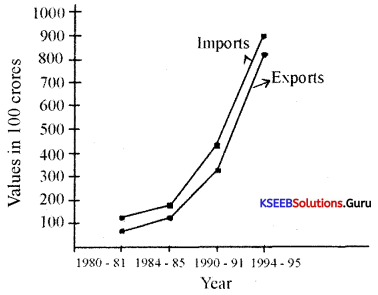 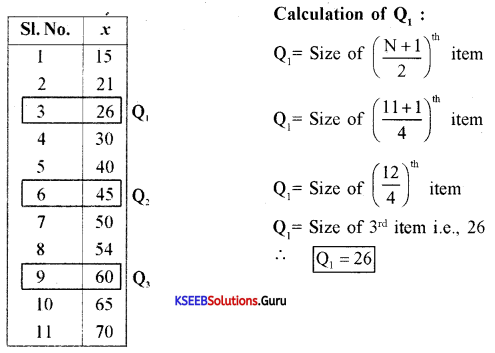 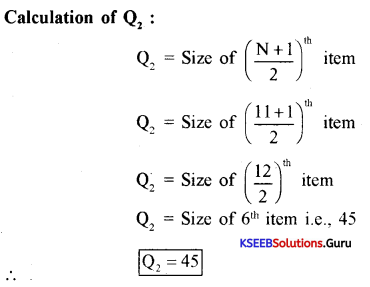 Question 43.
The yield of wheat per acre for ten districts of a state are as under 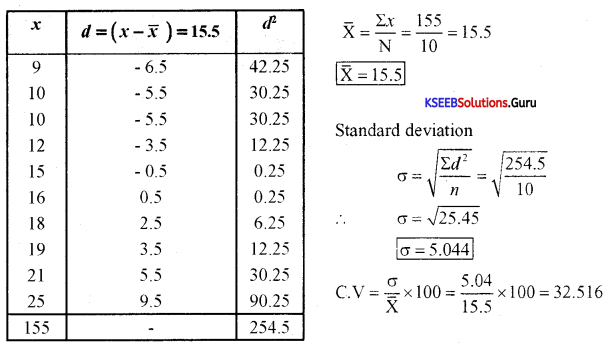 Question 44.
Explain the goals of five-year plans.
Answer:
The main goals ofthc five ‘ear plans are Growth, modernization, self-reliance and equity. They can be illustrated as follows:
(a) Growth: It refers to the increase in the gross domestic product. It also implies that the increase in the country’s capacity to produce the output of goods and services within the country. It includes larger stock of productive capital or a larger size of supporting services like transport and banking or an increase in the efficiency of productive capital land services.

A good indicator of economic growth, in the language of economics, is a steady increase in the gross domestic product (GDP). The GDP is the market value of all the goods and services produced in the country during a year. The GDP of a country is derived from the different sectors of the economy. namely agricultural sector, the industrial sector and the service sector.

Modernisation does not refer only to the use of new technology but also to changes in
social outlook such as the recognition that women should have the same rights as men.
In a traditional society, women are supposed to remain at home while men work.

(c) Self-reliance: The first seven five year plans gave importance to self reliance. Self reliance refers to avoiding imports of those goods which could be produced in India itself. This policy was considered a necessity in order to reduce our dependence on foreign countries, especially for food. It is a well-known fact that, people who were recently freed from foreign domination should give importance to selfrcliance.

(d) Equity: Growth withequity is one of the objectives of planning. A country can have high economic growth, the most modern technology developed with in the country itself but still have most of its people living in poverty It is important to ensure that the benefits of economic prosperity reach the poorer sections as well instead of being enjoyed only by the rich. So. in addition to growth. modernization and selfreliance. equity is also important.

Every Indian should be able to meet his or her basic needs such as food, a decent house, education and health care and so inequality in the distribution of wealth should be reduced.

Question 45.
Explain the causes of poverty.
Answer:
The major causes for poverty in India are as follows:
(a) Unemployment: Poverty is closely related to the nature of employment. unemployment and underemployment. A large section of urban and rural poor are unable to get proper income-generating employment opportunities. Industrialization has failed to absorb the unemployed youths in India. Casual labourers are most vulnerable as the’ do not have job security, no assets and have limited skills.

(b) Lnflation: A continuous rise in the price of food grains and other essential commodities has intensified the poverty of the poor. The purchasing power of poor people is deteriorating due to inflationary situations in the country.

Question 46.
List out the benefits of organic farming.
Answer:
Organic farming is that fanning which relies on crop rotation, green manure, compost and biological pest for growing crops. It is a whole system of farming that restores, maintains and enhances the ecological balance.

The main benefits of organic farming are as follows:

Question 47.
On the basis of data you have collected regarding participation of women in your locality in the below mentioned categories construct a pie chart.
(a) Self-employed
(b) Regular salaried employees
(c) Casual wage labourers. .
Answer:
As per the data collected regarding participation ofomcn in our 1oca1it. the following table is generated 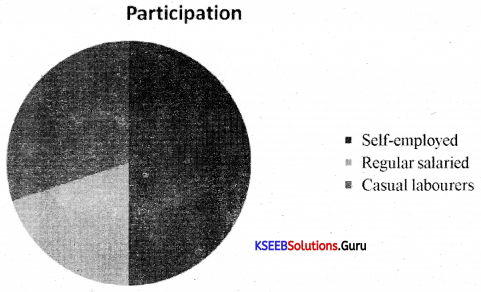 Question 48.
Give appropriate examples for the following.

The above-mentioned companies have come to India after 1991 new economic policy.