Question 4.
Describe tokens.
Answer:
The smallest individual units in a program are known as tokens.

Question 5.
What is an output stream?
Answer:
Output stream is a sequence of characters from the program to an output device like a monitor or printer.

Question 8.
What is auser defined function?
Answer:
A user-defined function is a self-contained block of statements, that performs a specific task, with a name given to it, defined by the user in a program.

Question 14.
Define coding. What is a pseudo code?
Answer:

Question 15.
Which programming approach does the OOP follow? What is the meaning of abstraction in OOP?
Answer:
OOP follows bottom-up approach of programming. Abstraction in OOP is “A model of a complex system that includes only the details essential to the perspective of the viewer of the system.”

Question 16.
Give the features of ‘char’ data type.
Answer:

Question 21.
Write any three functions of an operating system.
Answer:
1. Memory management:
The operating system allocates memory for requesting a process and frees the memory when the process is completed.

2. Device management:
The operating system is responsible to allocate input and output devices as and when they are required by the process.

3. Management of input/output:
The operating system allows control of access of programs to material resources via drivers.

2. Selection:
The process of selecting certain set of statements based on a requirement for – execution is called selection.

3. Iteration :
It is the process of repeating the execution of certain set of statements repeatedly until a requirement is satisfied.

2. Octal constants:
They are a sequence of digits starting with 0 (zero) to 7.

1. A manipulator in a C++ is used to control the formatting of output and/or input values.

2. Manipulators can only be present in Input/Output statements. The end1 manipulator causes a newline character to be output.

3. end1 is defined in the <iostream> header file and can be used as long as the header file has been included.

Question 25.
Give explanation of declaration of one dimensional array with an example.
Answer:
int marks[6];

Question 27.
Draw the schematic block diagram of a computer showing its essential components. Discuss the function of each component.

b. Control Unit:
This unit is considered to be the nerve centre of the computer. It controls all arithmetic operations to be performed. It also coordinates the functions of all the hardware units of the computer.

1. Arithmetic and Logic Unit (ALU):
This unit performs all the arithmetic calculations and logical operations involved in a program.

2. Memory Unit:
The function of this unit is to store data and the set of instructions given by the programmer. The computation results are stored in the memory and they may be used for subsequent computations or sent to the output unit.

3. Output Unit:
The output unit receives information from the CPU and presents it to the user in the desired form. Some common output devices are visual display unit (VDU) and Printer.

Question 30.
Write a note on character set and tokens. Give example.
Answer:
Character set is a set of valid characters that a language can recognize.

Tokens:
A token is a group of characters that logically belong together. C++ uses the following types of tokens. Keywords, Identifiers, Literals, Punctuators, and Operators.

Question 31.
Explain the structure of a C++ program with an example.
Answer: 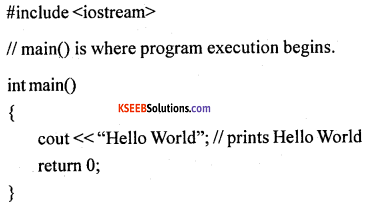 The various parts of the above program:

Question 32.
Explain switch-case statement with a suitable program example.
Answer:
Switch statement compares the value of an expression against a list of integers or character constants. The list of constants is listed using the “case” statement along with a “break” statement to end the execution. 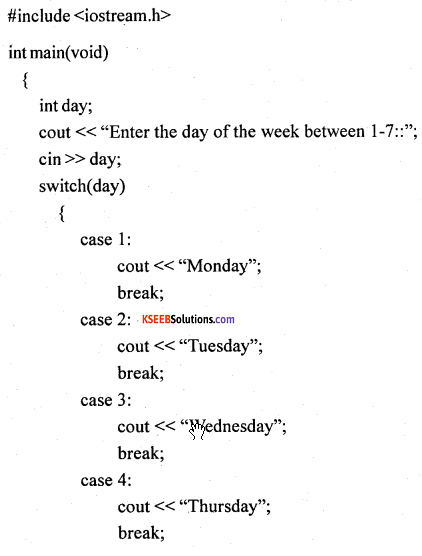 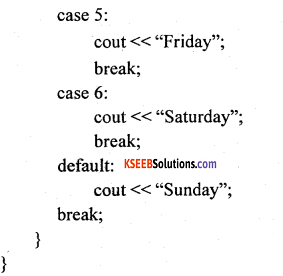 Result:
Enter the day of the week between 1-7::7
Sunday
In the above Control Structure example, the “switch” statement is used to find the day of the week from the integer input got from the user. The value present in the day is compared for equality with constants written in the word case. Since no equality is achieved in the above example (from 1 to 6) as the entered value is 7, default value is selected and gives “Sunday” as the result.

Question 33.
Write a program to find the sum of all the digits of a number using while statement.
Answer: 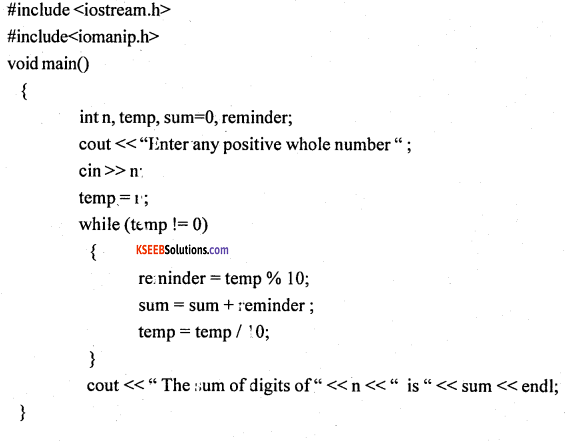 Question 34.
Write a C++ program to find the second largest out of the n numbers in the array.
Answer: 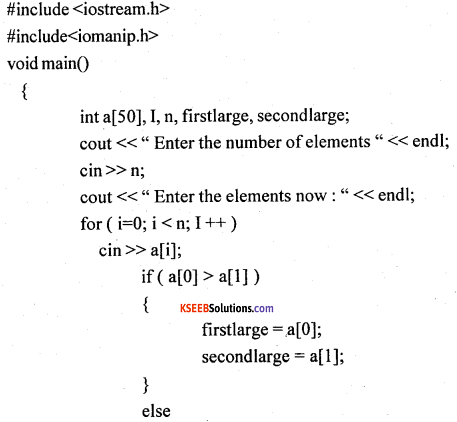 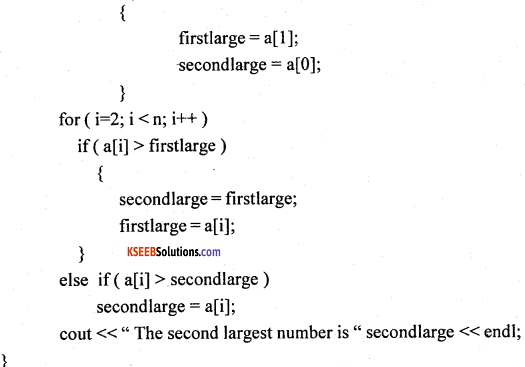 Question 35.
Explain passing default argument to the function with an example.
Answer:
When we define a function, we can specify a default value for each of the parameters. This value will be used if the corresponding argument is left blank during function call to the called function. 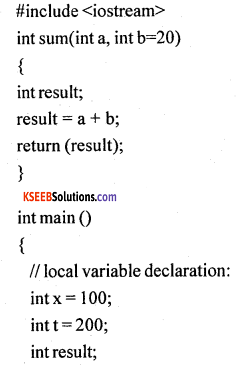 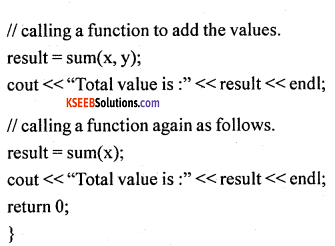 In the above program, the statement int sum(int a, int b=20) in the function header indicates the v default argument to the variable b is assigned with the value 20. During the first function call, the statement result = sum(x, y); copies the value of x and y to the called function and process of the result.

During second time function call i.e., result = sum(x);, only one argument is mentioned and the value for second argument is obtained from the default argument which is mentioned in the function definition i.e., b=20 and gives the processed result.

Question 36.
Mention “the #Steps to add rows, columns, to change row size, column width and delete a cell in a worksheet.
Answer:

Question 37.
Write a short note on internet.
Answer:
Internet is a worldwide network of computers connecting thousands and thousands of com¬puters across the globe. It is formed by the joining of many smaller networks around the world to form the largest network in the world.

In 1969 the American Department of Defense (DOD) started a network of devices called ARPANET (Advanced Research Projects Administration Network) with one computer in California and three in Utah. The actual term Internet was coined in 1995 by the FNC (Federal Networking Council, USA).

The computers of the Internet are connected through telephone lines, satellite links, modem and through many other means.

Internet consists of the following applications: