Question 3.
Define debugging?
Answer:
Bug is a problem in a program and debug means finding a solution to that problem.

Question 4.
Define a token?
Answer:
The smallest individual units in a program are known as tokens.

Question 5.
Which is the insertion operator?
Answer:
cout is used in conjuction with << operator, known as insertion or put to operator.

Question 8.
What does the keyword ‘void’ represent?
Answer:
The data type ‘void’ has no values and no operations means it is empty. It plays a role of generic data type and can represent any of the other standard types.

Question 10.
How many rows and columns are present in ESS?
Answer:
There are 256 rows and 65536 columns in an electronic spread sheet.

Question 11.
Mention any two features of ENIAC.
Answer:
In one second, the ENIAC could perform 5,000 additions, 357 multiplications or 38 divisions.

1. Encapsulation:
The method of combining data, attributes, and methods in the same entity is called encapsulation.

2. Polymorphism:
Polymorphism is a Greek word which means many shapes. In OOP, Polymorphism means the ability to take on many forms. The term is applied both to objects and to operations.

Question 19.
Explain impact and non-impact printers with examples?
Answer:
1. Impact printers:
Impact printers forms characters or images by striking a mechanism such as a print hammer or wheel against an inked ribbon, leaving an image on the paper. For example dot matrix printer is an impact printer.

Question 21.
What is meant by the terms multiprogramming and multitasking?
Answer:
1. Multiprogramming:
Multiprogramming is the technique of running several programs at the same time using timesharing. It allows a computer to do several things simultaneously.

2. Multitasking:
Running two or more programs at the same time on the same single-processor (single CPU) computer is called multitasking.

Question 22.
Write a flowchart to find the greater of two numbers?
Answer: 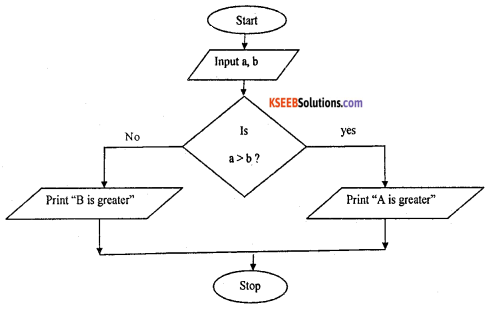 Question 26.
Declare a structure that contains the data of a student?
Answer: 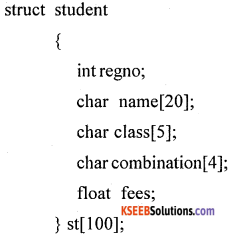 The first computers used vacuum tubes for electronic circuitry and magnetic drums for memory. They were very expensive to operate and the power consumption was high, generated a lot of heat, which was often the cause of malfunctions.

In the second generation computers, symbolic or assembly languages were used. High-level programming languages were also in use at this time, such as early versions of COBOL and FORTRAN. Their memory consisted of magnetic core technology.

The development of the integrated circuit was made use of the third generation computers. Transistors were miniaturized and were placed on silicon chips, called semiconductors.

The microprocessor was used in the fourth generation computers, as thousands of integrated _ circuits were built onto a single silicon chip. The Intel 4004 chip, developed in 1971, located all the components of the computer – from the central processing unit and memory to input/output controls – on a single chip.

Question 29.
Explain ‘while’ structure with an example?
Answer:
A ‘while’ loop statement repeatedly executes a statement or sequence of statements written in the flower brackets as long as a given condition returns the value ‘true’.
Syntax:
The syntax of a while loop in C++ is:
while(condition)
{
statement(s);
}
Here the condition may be any expression, and true for any non zero value. The loop iterates while the condition is true.
When the condition becomes false, program control passes to the line immediately following the loop.

During the first attempt, when the condition is tested and the result is false, the loop body will be skipped and the first statement after the while loop will be executed. 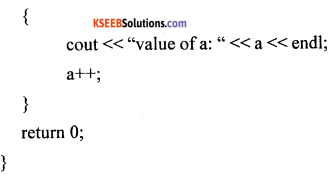 Question 30.
Explain the structure of C++ program. Give example?
Answer: 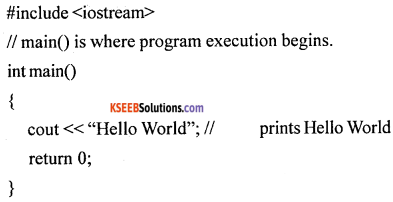 The various parts of the above program:

Question 31.
Explain the working of ‘for’ loop with an example
Answer:
A ‘for’ loop is a repetition control structure that allows you to efficiently write a loop that needs to execute a specific number of times.
The syntax of a for loop in C++ is:
for (initialization; condition; increment/decrement)
{
statement(s);
}

The working of a ‘for’ loop:

1. The initialization step is executed first, and only once in the beginning. It is used to declare and initialize any loop control variables.

3. After the body of the ‘for’ loop executes, the flow of control jumps back up to the increment/ decrement statement and updates any loop control variables.

4. Then condition is evaluated again. If it is true, the loop executes and the process repeats itself (body of loop, then increment step, and then again condition). After the condition becomes false, the for loop terminates. 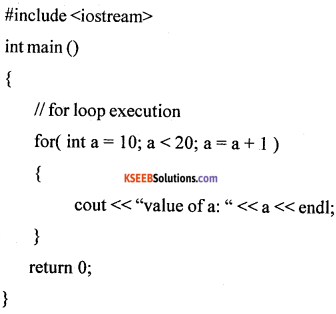 Question 32.
Write a C++ program to find the factorial of a given number?
Answer:

Question 33.
Write a C++ program to read and print the elements of a two dimensional array.
Answer: 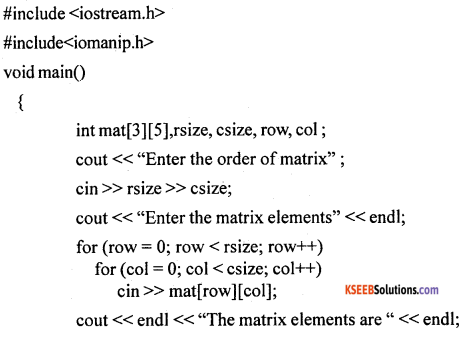 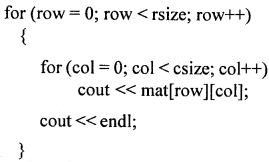 Question 34.
Explain the working of “function with arguments and with no return value”? With an example.
Answer:
Function with argument and no return value with an example:
The calling function main() gives the function call to the called function by passing arguments or values. Then the called function takes the values and performs the calculations and it self gives the output but no value sent back to the calling function. 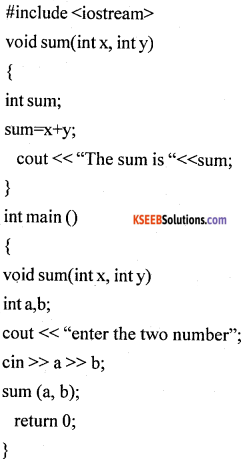 In the above example, sum() is a user defined function. main() is a calling function which gives a function call sum (a, b); with actual arguments and The copy of values of a and b are sent to formal arguments x and y in the called function sum().

The function sum() performs addition and gives the result on the screen it can be deserved that. Here no value is sent back to the calling function main(). These kinds of functions are called “Function with arguments but no return values”.

2. The product() :
It calculates the multiplication of values in the specified cells. For example, = product(B1:B5).

Question 36.
Using ESS, analyze the result for the following data and represent it with the help of a Bar graph.
Answer: