Question 1.
Name the modification of leaves for climbing.
Answer:
LeafTendrils.

Question 2.
Give an example of a medicinal plant of the family Solanaceae.
Answer:
Belladonna/ashwagandha.

Question 6.
Name the phase of Prophase-1 of meiosis during which synapsis takes place.
Answer:
Zygotene.

Question 7.
What are porins?
Answer:
Porins are proteins that form huge pores in the outer membranes of the plastids, mitochondria, and some bacteria allowing molecules up to the size of small proteins to pass through.

Question 9.
What happens when a plant cell is placed in a hypertonic solution to the protoplasm.
Answer:
The protoplasm will shrink away from the walls due to plasmolysis.

Question 10.
Define transamination.
Answer:
It involves the transfer of an amino group from one amino acid to the keto group of a ketoacid.

Question 11.
Name the phases of the life cycle in plants, which alternate with each other.
Answer:
Gametophyte and sporophyte.

Question 13.
What is Venation? Mention the types.
Answer:
The arrangement of veins and veinlets in the lamina of the leaf is termed as venation, types :
(a) Reticulate
(b) Parallel.

Question 14.
List the key features of the Metaphase of mitosis.
Answer:

Question 15.
What are micronutrients? Name any two of them.
Answer:
Mineral elements required in very small amounts ie, less than 10 mmole kg-1 of dry matter are known as micronutrients, eg: Zinc, copper.

Question 21.
Name the three major types of cells and their secretions of gastric glands.
Answer:
(a) Mucus neck cells: secrete mucus.
(b) Peptic or chief cells: secrete proenzyme pepsinogen.
(c) Parietal or oxyntic cell: secrete HCl and intrinsic factor essential for the absorption of vitamin B12.

Question 23.
Briefly explain the structure of myosin.
Answer:
Myosin (Thick) Filament: length is about 1.6 nm and breadth the 15nm.

Question 25.
Which are the organs involved in the regulation of kidney functioning.
Answer:
Hypothalamus, Juxta Glomerulus (diurnal) rhythm of our body.

Question 27.
List any five general characteristics of Pteridophytes.
Answer:
Pteridophytes are characterized by the following features:
1. Their life cycle, comprises a distinct diploid phase represented by a sporophyte and a haploid phase by a gametophyte exhibiting heteromorphic alternation of generations.

2. Sporophyte represents the dominant phase of the life cycle, which is an entirely independent plant body. It bears roots, stems, and leaves. It reproduces asexually by sporangia.

3. The sporangia may be arranged in specific groups called sorus. In a few cases, sporangial structures aggregate on a specialized reproductive structure called strobilus or cone.

5. The gametophyte through independence is short-lived. It bears both male and female reproductive structures namely, antheridia and archegonia respectively.

6. Gametophytes thus show Oogamous types of sexual reproduction like Bryophytes. Water is essential for fertilization. The zygote develops into a multicellúlar embryo. Hence, the group is treated under embryophytes Siphonogama (Siphonogama – as it possesses vasculature).

2. Segmentation of the body is less apparent and the number of segments is fewer in number.

3. They show the highest degree of cephalization, that is the formation of a well-developed head. The Head is usually formed by the fusion of six body segments. Following the head, the region is the trunk which is usually divisible into an anterior thorax and a posterior abdomen.

4. Their body segment usually bears paired lateral and jointed appendages. A segment of the appendage is known as podomere. The appendages are variously modified in different groups and even in different parts of the same animal.

Some appendages help, in locomotion. Due to the presence of jointed appendages or legs for locomotion, the phylum gets the name Arthropoda, which means jointed feet.

Question 31.
Draw a neat labeled diagram of the anatomy of the Dicot leaf.
Answer: 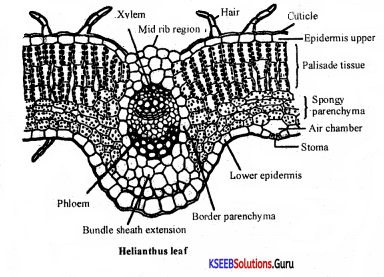 Question 32.
Brief explain Calvin cycle with schematic representation.
Answer:
It occurs in the grana of the chloroplast.
It utilizes the assimilatory powers i.e., ATP and NADPH2 produced in 11gm reaction. 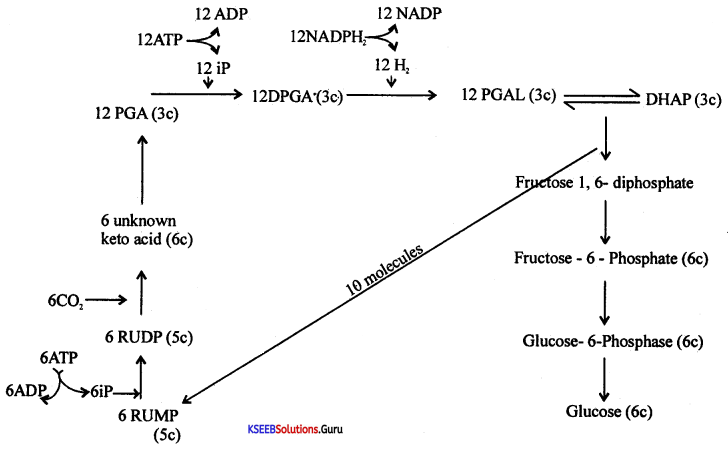 Note: To complete a Calvin cycle, 18 ATPs and 12 NADPH2 molecules are required.

Question 34.
Explain the structure of the alimentary canal of Cockroach.
Answer: 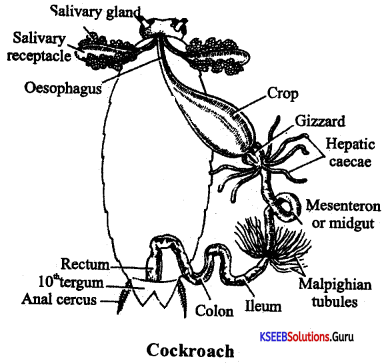 Question 36.
(a) Compare aerobic respiration and fermentation.
(b) What is the respiratory quotient? Write the RQ value of carbohydrates.
Answer:
(a) Aerobic respiration: It is a completely oxygen-dependent process, and occurs in the presence of molecular oxygen. It is centered in mitochondria. Here glucose is completely oxidized into CO2 and water. It generates 38 ATP per glucose, and hence a more efficient energy-releasing process. It occurs in the majority of living organisms called aerobes.
C6 H12 O6 + 6O2 → 6CO2 + 6H2O + 686kcal + 38ATP mol

Anaerobic respiration: It is an oxygen-independent procéss and occurs in the absence of oxygen. It is centered in general cytoplasm. Here glucose is incompletely oxidized int0 ethyl alcohol. and CO2 or lactic acid generates only 2 ATPs per glucose molecule and hence less efficient energy-releasing process. It occurs only, in a few orgánisms like bacteria, yeast, etc.

Question 37.
Draw a neat labeled diagram of a neuron.
Answer: 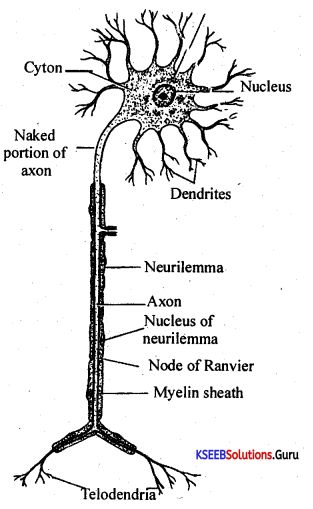