Question 2.
What is a good fuel?
Answer:
A good fuel is one which

Question 3.
If you could use any source of energy for heating your food, which one would you use and why?
Answer:
We should select which is easily available and it should be cheaper. Bio-gas is an excellent fuel as it contains. It burns without some. Its heating capacity is high. This gas is convenient for consumption and transportation.

Question 1.
What are the disadvantages of fossil fuels?
Answer:

Question 3.
How has the traditional use of wind and water energy been modified for our convenience?
Answer:
(1) Wind energy: The kinetic energy of the wind can be used to do work. This energy was harnessed by wind mills in the past to do mechanical work. For example in a water lifting pump, the rotatory motion of windmill is utilized to lift water from a well. Today wind energy is also used to generate electricity. A windmill essentially consists of a structure similar to a large electric fan that is erected at some height on a rigid support.

A number of windmills are erected over a large area, which is known as wind energy farm. The energy output of each windmill in a farm is coupled together to get electricity on a commercial scale wind energy farms can be established only at those places where wind blows for the greater part of a year. The wind speed should also be higher than 15 km/h to maintain the required speed of the turbine, since, the tower and blades are exposed to the vagaries of nature like rain, sun, storm and cyclone, they need a high level of maintenance.

(2) Water energy: In order to produce hydel electricity, high rise dams are constructed on the river to obstruct the flow of water and thereby collect water in larger reservoirs. The water level rises and in this process the kinetic energy of flowing water gets transformed into potential energy. The water from the high level in the dam is carried through pipes, to the turbine, at the bottom of the dam. Sine the water in the reservoir would be refilled each time. It rains (hydropower is a renewable source of energy) we would not have to worry about hydro electricity sources getting used up the way fossil fuels would get finished one day.

Question 3.
What is geothermal energy?
Answer:
Due to geological changes, molten formed in the deeper hot regions of earth’s crust are pushed upward and trapped in certain regions called ‘hot spots’. This is called Geothermal energy.

Question 4.
What are the advantages of nuclear energy?
Answer:

Question 1.
Name two energy sources that you would consider to be renewable. Give reasons for your choices.
Answer:
Solar energy and wind energy are the two renewable sources of energy.
i) Solar energy: The sun has been radiating an enormous amount of energy at the present rate for nearly 5 billion years and will continue radiating at that rate for about 5 billion year more. A large number of solar cells are, combined in an arrangement called solar cell panel that can deliver enough electricity for practical use.

The principal advantages associated with solar cells are that they have no moving parts, require little maintenance and work quite ossificatory without the use of any focussing device. Another advantage is that they can-be set up in remote and in accessible hamlets or very sparsely inhabited areas in which laying of a power transmission line may be expensive and not commercially viable.

ii) Wind energy: Unequal heating of the landmass and water bodies by solar radiation generates air movement and causes winds to blow. This kinetic energy of the wind can be used to work. Wind energy is an environment-friendly and efficient source of renewable energy. It requires no recurring expenses for the production of electricity.

Question 2.
Give the names of two energy sources that you would consider to be exhaustible. Give reasons for your choices.
Answer:

Fossil fuels are present in a limited. amount in the earth. Once exhausted, they will not be available to us again. It takes millions of years for fossil fuel to be formed. The nuclear materials which can be conveniently extracted from earth 7. are limited and hence they will get exhausted one day.

Question 3.
Most of the sources of energy we use represent stored solar energy. Which of the following is not ultimately derived from the Sun’s energy?
(a) geothermal energy
(b) wind energy
(c) nuclear energy
(d) bio-mass.
Answer:
(b) wind energy.

Question 4.
Compare and contrast fossil fuels and the Sun as direct sources of energy.
Answer:
Air pollution is caused by burning of coal or petroleum products. The oxides of carbon, nitrogen and sulphur that are released on burning fossil fuels are acidic oxides. These lead to acid rain which affects our water and soil resources. In addition to the problem of air pollution, recall the green house effect of gases like carbon dioxide.

Sun is the main source Of energy, we get all sources of energy by solar energy. Hence this a renewable source of energy which we get in plenty and free of cost.

Question 5.
Compare and contrast bio-mass and hydro electricity as sources of energy.
Answer:
Bio-mass: Cow-dung, various plant materials like the residue after . harvesting the crops, vegetable waste and sewage are decomposed in the absence of oxygen to give biogas. Since the starting material is mainly cow-dung, it is popularly known as ‘gober gas’. Biogas is produced in biogas plant.

Bio gas is an excellent fuel as it contains up to 75% Methane. It burns without smoke, leaves no residue like ash in wood, charcoal and coal burning. The slurry left behind is removed periodically and used as excellent manure. This is one of the renewable source of energy.

Hydro Electricity: In order to produce hydel electricity, high rise dams are constructed on the river to obstruct the flow of water and thereby collect water level rises and in this process the kinetic energy of flowing water, gets transformed into potential energy. The water from the high level in the dam is carried through pipes to the turbine, at the bottom of the dam. Since the water in the reservoir would be refilled each time it rains. We would not have to worry about hydro electricity sources getting used up the way fossil fuels would get finished one day.

Question 6.
What are the limitations of extracting energy from—
(a) the wind?
(b) waves?
(c) tides?
Answer:
(a) The wind:

These are the limitations of extracting energy from the wind.

(b) Limitations of extracting waves energy: The waves are generated by strong winds blowing across the sea. Wave energy would be a viable proposition only where waves are very strong.

(c) Limitations of extracting tidal energy: The locations where such dams can be built are limited.

Disadvantages of using a solar cooker.

Question 10.
What are the environmental consequences of the increasing demand for energy? What steps would you suggest to reduce energy consumption?
Answer:
They are:

In order to reduce energy consumption

Question 1.
Draw a neat diagram showing a model to demonstrate the process of thermoelectric production and label the parts.
Answer

Question 2.
Draw a neat diagram of a solar cooker and label the parts.
Answer: 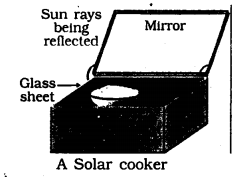