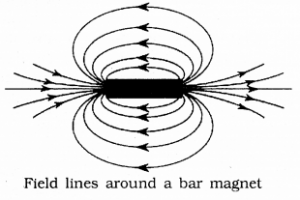 Field lines around a bar magnet

Question 1.
Consider a circular loop of wire lying in the plane of the table. Let the current pass through the loop clockwise. Apply the right- hand rule to find out the direction of the magnetic field inside and outside the loop.
Answer: 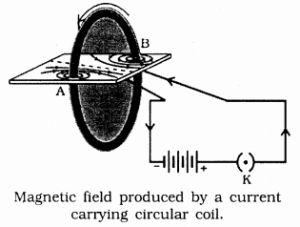 Question 2.
The magnetic field in a given region is uniform. Draw a diagram to represent it.
Answer: 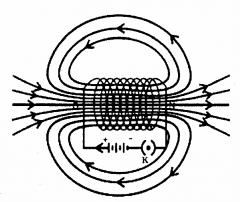 The figure indicates that the magnetic field is the same at all points in the solenoid. That is field is uniform inside the solenoid.

Question 2.
In Activity 13.7, how do we think the displacement of rod AB will be affected if

Question 1.
State Fleming’s left-hand rule.
Answer:
According to this rule, stretch the thumb, forefinger, and middle finger of your left hand such that they are mutually perpendicular. If the first finger points in the direction of the Magnetic field and the second finger in the direction of current, then the thumb will point in the direction of motion or the force acting on the conductor.

The current drawn by this electric oven is 9 A whereas the fuse in the circuit is ( only 5 A capacity. When a high current of 9 A flows through the 5 A fuse, the fuse wire will get heated too much, melt and break, the circuit. Therefore, when a 2 kW power rating electric oven is operated in a circuit having a 5 A fuse will blow off cutting off the power supply in this circuit.

Question 3.
What precaution should be taken to avoid the overloading of domestic electric circuits?
Answer:

Question 3.
The device used for producing electric current is called a
(a) generator
(b) galvanometer
(c) ammeter
(d) motor.
Answer:
(a) generator.

Question 6.
State whether the following statements are true or false.
(a) An electric motor converts mechanical energy into electrical energy.
(b) An electric generator works on the principle of electromagnetic induction.
(c) The field at the centre of a long circular coil carrying current will be parallel straight lines.
(d) A wire with a green insulation is usually the live wire of an electric supply.
Answer:
(a) False
(b) true
(c) true
(d) False.

Question 8.
How does a solenoid behave like a magnet? Can you determine the north and south poles of a current-carrying solenoid with the help of a bar magnet? Explain.
Answer: 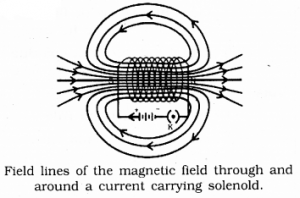 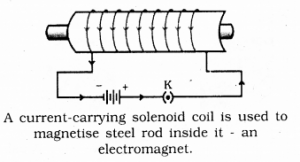 As shown in figure a strong magnetic field produced inside a solenoid can be used to magnetise a piece of Magnetic material, like soft iron, when placed inside the coil. The magnet so formed is called an electromagnet. 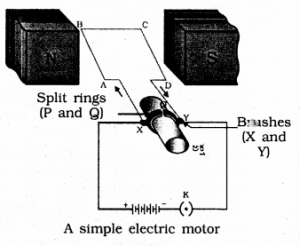 Principle:
An electric motor is a rotating device that converts electrical energy to mechanical energy working.

Working:
Current in the coil ABCD enters from the source battery through conducting brush X and flow back to the battery through brush Y. Notice that the current in the Arm AB of the coil flows from A to B. In arm CD it flows from C to D that is opposite to the direction of current through arm AB on applying Fleming’s left hand rule for the direction of force on a current¬carrying conductor in a magnetic field. We find that the force acting on arm AB pushes it downwards while the force acting on arm CD pushes it upwards.

Thus the coil and the Axle O, mounted free to turn about an axis, rotate anti-clockwise at half rotation. Q makes contact with the brush X and P with brush Y. Therefore the current in the coil gets reversed and flows along the path DCBA. The reversal of current also reverses the direction of force acting on the two arms AB and CD. Thus the arm AB of the coil that was earlier pushed down, is now pushed up and the arm CD previously pushed up is pushed down. There is a continuous rotation of the coil and to the axle.
Split rings in electric motors acts as a commutator.

Question 13.
A coil of insulated copper wire is connected to a galvanometer. What will happen if a bar magnet is

Question 15.
State the rule to determine the direction of a

Question 16.
Explain the underlying principle and working of an electric generator by drawing a labelled diagram. What is the function of the brushes?
Answer: 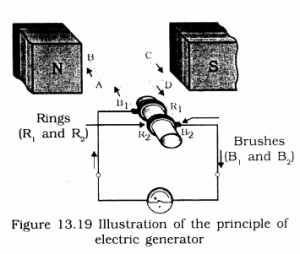 Principle: In an electric generator, mechanical energy is used to rotate a conductor in a magnetic field to produce electricity. It is working on the principle of electromagnetic induction.

Working: When the Axle attached to the two rings is rotated such that the arm AB moves up (and the arm CD moves down) in the magnetic field produced by the permanent magnet. Let us say the coil ABCD is rotated clockwise in the arrangement. By applying Fleming’s right-hand rule, the induced currents are set up in these arms along with the directions AB and CD. Thus an induced current flows in the direction ABCD. If there are a larger number of turns in the coil, the current generated in each turn adds up to give a large current through the coil. This means that the current in the external circuit flows from B2 and B1.

Question 17.
When does an electric short circuit occur?
Answer:
Overloading can occur when the live wire and the neutral wire come into direct current (This occurs when the insulation of wires is damaged or there is a fault in the appliance) In such a situation, the current in the circuit abruptly increases. This is called short-circuiting.

Question 18.
What is the function of an earth wire? Why is it necessary to earth metallic appliances?
Answer:
This is used as a safety measure, especially for those appliances that have a metallic body, for example, electric press, toaster, table fan, refrigerator, etc. The metallic body is connected to the earth wire which provides a low-resistance conducting path for the current. Thus earth wire ensures that any leakage of current to the metallic body of the appliance keeps its potential to that of the earth and the user may not get a severe electric shock.

Question 1.
Magnetic field is a quantity that has both …….. and ……
Answer:
Magnitude, direction.

Question 2.
An electric current through a metallic conductor produces a ……. around it.
Answer:
Magnetic field.

Question 3.
In electric motors, the …… acts as a commutator
Answer:
split ring.

Question 5.
In our country the potential difference between two wires is ……
Answer:
220 V.