Every chapter available in the KSEEB SSLC Class 10 English Solutions subject is explained clearly in an easy way. Learn the depth concept by referring to the Chapter wise A Poison Tree Questions and Answers Pdf, Notes, Summary Class 10 English Karnataka State Board Solutions. Have a look at every topic and get the complete knowledge on the English subject. Just refer to Karnataka Class 10 English Poem Chapter 5 A Poison Tree pdf and have a grip on the total subject.

I. Answer the following questions briefly.

Question 4.
When the poet is thinking about his anger, the picture of a tree comes to his mind. Which word in the first stanza suggests a tree?
Answer:
‘grow’. The pronoun, ‘it’ implies that the poet is talking about a tree. The line Till it bore an apple bright;’ supports this answer.

Question 9.
Which line tells you that the speaker is a scheminfl&and cunning friend?
Answer:

Question 10.
The second stanza continues the image (picture) of a tree suggested in the first stanza. Which words in the second stanza refer to a growing
Answer:
“Water’dHsunned it’.

Question 12.
What kind of a tree and fruit (here apple) can grow when they are nurtured by fears, tears, hypocritical smiles and deceitful wiles?
Answer:
A poison tree with poisonous fruits.

Question 16.
Who “stole” into the speaker’s garden?
Answer:
The enemy

Question 19.
Why, do you think, “dies” at the end? Is it only the enemy? Does the speaker also die? What kind of death ‘ does he die?
Answer:
The enemy is physically and truly dead. But the speaker also suffers a lot of guilt for having caused this death. Though he is alive physically, he is emotionally dead.

Question 20.
“A Poison Tree” could refer to
a. the tree of hatred and enmity grew by the seed of suppressed anger
b. the destructive effect of being hypocritical and deceitful
c. the spiritual death of a person for nurturing base passions
Answer:
All of the above.

Read the following extracts .carefully. Discuss in pairs and then write the answers to the questions given below them:

b) Why did he steal into the garden?
Answer:
He came stealthily to steal the apple from the speaker’s apple tree.

c) Explain the phrase ‘veiled the pole’.
Answer:
Veil’d’ means ‘covers’. It can also mean ‘deliberately hide in order to fool someone.’

Question 2.
And I sunned it with smiles And with soft deceitful wiles
a) What does the word “sunned’ suggest?
Answer:
As long as the speaker smiles hypocritically, his anger with his foe continues to grow. Thus, his smiles are acting upon his anger like sunshine, helping it to grow.

b) Explain the phrase “deceitful wiles”
Answer:
‘Deceitful’ means ‘deliberately done in order to fool someone’. The speaker pretends to be friendly with his enemy by behaving in a very sweet manner.

c) Why had the speaker “sunned” it?
Answer:
The speaker was afraid to express his anger with his enemy. Hence he pretended to be friendly and happy with him. This pretence only made his anger grow.

Discuss, in pairs or groups of 4 each, the answers to the following questions. Note down the important points and then develop them into a paragraph.

Question 1.
How does the poet use the image of a tree to bring out the destructive effect of suppressed anger?
Answer:

Paragraph: The speaker does not tell his friend that he is angry with him. As a result, his anger grows. His growing anger is traced through the growth of a tree. Just as a tree is watered and provided with sunlight for its growth so does the speaker nurture his anger with fears, tears, fake smiles and wicked tricks. The tree of anger bears an apple that shines bright like the apple in the garden of Eden. It attracts the friend and he
steals it by night when the speaker was not looking. The result, the apple from the poisonous tree killed the friend. The speaker too dies spiritually for allowing anger to grow and for rejoicing in the death of his friend.

IV. Activities:
Discuss the following in groups of 4 each. One in each group notes down the important points. Share the group’s findings with the neighbouring group.

Question 1.
Do you think the speaker was right in being ‘glad’ at his foe’s death? Why? Why not?
Answer:
All along the speaker had been afraid of his enemy and hence had not been able to express his anger. But he was not able to forget his anger too. Therefore he had nurtured it with fears, hypocritical smiles and deceitful wiles. When the enemy ate the poisonous apple and died, the speaker realized that he did not have to fear anyone or pretend anymore. So he was glad at his death. Considering the circumstances in which the speaker lived while the enemy was alive, it was natural on his part to feel ‘glad’ at the enemy’s death. If he had expressed sorrow, it would have been insincerity and pretence on his part.

Question 3.
How could he have avoided planting a poisonous tree?
Answer:
The speaker could have expressed his anger with the enemy. He could have talked about the hurt he felt, and asked the enemy for an explanation. This would have given an outlet to his emotions and rendered his mind clear.

The poet says that he was angry with his friend but he explained the reason of his anger and so he was satisfied and continued his friendship. He was also angry with his enemy but he did not tell him as much. His anger against his enemy increased day by day.

He allowed the enmity to grow with fear. He shed tears day and night for not being able to express his feelings to his enemy. He appeared to be happy in the external world and he used to smile to cover his anger.

The tree of enmity began to grow as he nourished it day and night with fears and tears. It bore a fruit which the enemy saw with eager eyes. Knowing that it was my fruit, he stole one night into my garden.

In the morning I was happy to see – my enemy lying dead under the tree. Because it was a Poison Tree. 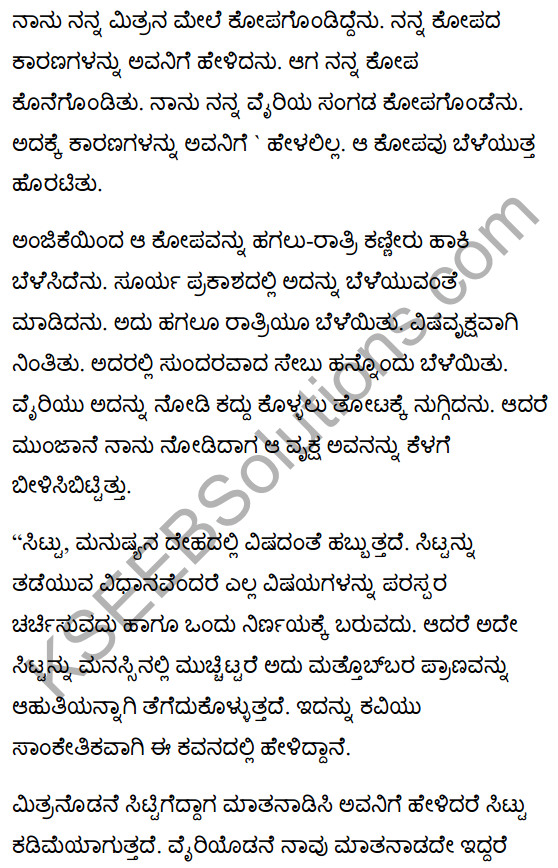 Hope all the information given regarding Karnataka Class 10 English Chapter 5 A Poison Tree will help you to get good knowledge. For any queries, you can contact us and clear your doubts. Connect with us using the comment section. Also, we love your feedback and review. Get your Chapter Wise Karnataka Secondary Education Examination Board Class 10 Textbook Solutions for English PDF start learning for the exam.