With the help of the Karnataka Secondary Education Examination Board Class 8 English Solutions Chapter 19 The Miser Questions and Answers Pdf, Notes, Summary you can get an idea about the subject. Also we suggest the students keep the textbook aside to learn the subject in depth.

I. Answer in a sentence or two each:

Question 1.
What was there in Surender’s hoard to call himself wealthy?
Answer:
Three storehouses full of gold, silver, rare diamonds and precious stones.

Question 2.
What did he see in the market place one day?
Answer:
Surender saw a man eating a ladoo.

Question 3.
How did he savour the thought of having a ladoo?
Answer:
When he saw a man eating a ladoo, his mouth began to water. He could feel its sweetness tickling his tongue.

Question 4.
How did Surender’s longing for a ladoo make him suffer?
Answer:
Surender wanted to eat a ladoo so badly that he began to drool. His legs grew weak and his stomach rumbled loudly.

Question 5.
Why was Vandana happy when Surender asked for a ladoo?
Answer:
She was happy because she could share them with her children, neighbours and servants.

Question 6.
Why didn’t Vandana’s happiness last long?
Answer:
Surender did not want to share ladoos with his family, servants and neighbours. He did not want to waste money on so many ladoos.

Question 7.
How many ladoos did Vandana finally make? Why?
Answer:
Vandana made only one ladoo. Surender insisted that she make a ladoo only for him.

Question 10.
Why was Vandana astonished?
Answer:
Sakka in the form of Surender, said that he was going to share his wealth. Vandana could not believe her ears. She was astonished at the change.

Question 11.
What was the warning given by the make-believe Surender to the crowd at his barns?
Answer:
He warned the crowd not to be afraid if an impostor who looked like him came and threatened them. He told them to drive him away.

Question 12.
What was the real Surender’s complaint to his majesty?
Answer:
Surender complained that he was being robbed and looted of his treasure by the people of the town. And they had chased him away when he had protested.

Question 13.
Whom did the puzzled king request to decide on the two look-alike Surenders?
Answer:
The king requested Vandana to identify her husband.

Question 14.
What was Vandana’s trial?
Answer:
The puzzled king could not tell the difference between the two Surenders. He left it to Vandana to decide who the real Surender was.

Question 16.
How did Vandana want to celebrate when the ordeal was over?
Answer:
Vandana wanted to celebrate by making dozens of ladoos. She liked to share them with her children, servants, neighbours and friends.

II. Answer the following questions in about fifty words each:

Question 1.
Explain Surender’s miserliness.
Answer:
Surender was a wealthy man. He had three barns full of gold, silver, diamonds and precious stones. But, he was a terrible miser. He bought the cheapest, the dowdiest and the most ordinary clothes for his children. He almost starved the family. They supped on gruel most of the time.

Question 2.
Why didn’t Surender ask his wife to make a ladoo?
Answer:
Surender saw a man eating a ladoo. His mouth watered at the sight of the ladoo.- He desperately wanted to eat one. He thought if he asked his wife to make a ladoo, she would make a number of ladoos, so that she could share them with their children, the servants and their friends. Surender did not want to waste money on so many ladoos.

Question 3.
How did Sakka, the king of the Gods, teach Surender a lesson?
Answer:
Sakka, the king of the Gods, watched the drama that took place in Surender’s house. He wanted to teach him a lesson. He assumed the form of Surender and came to Surender’s house when the real Surender had gone for a walk. He declared that he was going to share his wealth. He asked Vandana to invite people, throw open the barn doors and tell the people to take away whatever they wanted.

He told the people to chase Surender away if he came and objected. The real Surender saw this. He was heart broken, and he went to the king to complain. Sakka also appeared before the king in Surender’s form. The king asked Vandana to identify her husband. She asked a question to each of them and declared Sakka as her husband. Then Sakka took his real form and convinced Surender to be generous, because his own wife and children did not want him. Surender cried and promised to be more generous.

Question 4.
Describe Surender’s ordeal in the King’s palace.
Answer:
Surender complained to the king saying that he was robbed by the people of the town. When the king asked he said that he had not given the order to throw open the barn doors. The king sent for the person who had given the order. Sakka came to the king’s court with Vandana and the children. The puzzled king asked Vandana to identify her husband.

She asked both Surenders which was better – to be generous to himself, his family, his friends, neighbours or servants. Sakka replied in the affirmative. The real Surender said ‘to none’. Vandana announced that the make-believe Surender was her husband. The real Surender cried out in grief and disbelief. Sakka took his own form and told Surender that his own wife and children did not want him because of his miserliness. He advised him to be generous.

Four alternatives are given for each of the following questions/ incomplete statements. Choose the most appropriate alternative.

Question 2.
This shows that Surender was a terrible miser
A) He bought the cheapest and most ordinary clothes for his children.
B) His family supped on gruel most of the time.
C) He asked his wife to prepare only one ladoo for himself.
D) All of the above.
Answer:
D) All of the above.

Question 5.
Who wanted to teach Surender a lesson?
A) Vandana
B)the King
C) Sakka
D) None of them
Answer:
C) Sakka

Fill the missing letters to get the synonyms of the following:

The Broken Gate Summary In English 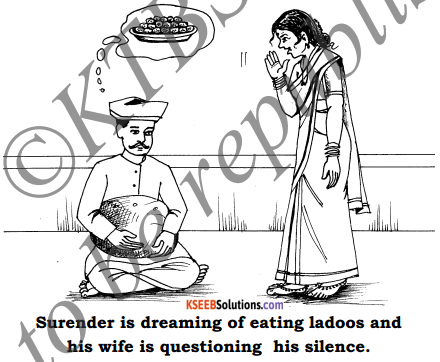 Surender was a very rich man. He had stored money, gold, silver, diamonds and precious stones in three huge storehouses. He was so stingy that he hated to spend any of his hoarded treasure. He did not even take care of his family. He bought the cheapest clothes for his children and he almost starved his family members. He made them drink gruel most of the time.

One day, it so happened that he saw a man eating a ladoo. It had been a long time since he had eaten a ladoo. At the thought of a ladoo his mouth began to water. He desperately yearned for a ladoo. He knew his wife Vandana would make him a ladoo. But, she would prepare many ladoos so that she could share them with their children, servants and friends. Surender did not want to waste his money on so many ladoos. So, he decided to keep quiet.

But, the desire to eat a ladoo was so much that his legs became weak and his stomach began to rumble loudly. His wife asked him what was wrong with him. Surender finally asked her to make him a ladoo. Vandana was happy. She said she would make dozens of ladoos and give them to their children, neighbours and servants. Surender was appalled at the thought of his money being wasted on so many ladoos. He said there was no need to share them with neighbours and friends. When Vandana said she would make ladoos for the family, Surender objected to it also.

He did not want his children to eat ladoos. Disappointed, Vandana said she would make two ladoos, one for him and one for her. This was also not acceptable to Surender. He told her to make only one ladoo for him. Vandana was ashamed of her husband’s miserliness. She made a single ladoo, and Surender ate it greedily. He did not even feel a bit of remorse for not sharing it with his family.

Sakka, the King of Gods and the Ruler of the Heavens, watched all this from above and decided to teach Surender a lesson. The next day, when Surender had gone for a walk in the morning, Sakka assumed Surender’s form and entered his house. He told Vandana that he was going to share all his wealth. He told her to throw open the doors of his treasure houses and invite people to take away whatever they wanted.

Vandana was very happy at this change in her husband. She sent a servant to invite people and open the barn doors. The people came running and started taking away the wealth. Sakka told them that if an imposter who looks like him tries to stop them, they should drive him away. Surender returned and found his wealth being plundered. He tried to stop them, but was driven away.

Surender went to the king and complained against the people plundering his wealth. The king wanted to know who had given the order to invite people. Then, Sakka in the form of Surender came to the court accompanied by Vandana and the children. There was an altercation between the two Surenders. The king was confused. He requested Vandana to identify the real Surender. Vandana asked both the Surrenders if it was better to be generous to all or not. The make-believe Surender agreed with her. The real Surender did not agree with her. Vandana chose the make-believe Surender as her husband.

The real Surender was heartbroken. Sakka then appeared in his own form and told the king that he had come down from heaven to teach Surender a lesson. He told Surender that his miserliness’ had brought him to such a situation. Even his wife and children did not want him, because they were fed up with his petty and mean behaviour. Sakka advised Surender to be more generous.

Surender said he would try to be a little more generous, but, Sakka told him to be a lot more generous and warned him, if he did not do so, he would come back for him. Sakka vanished in a cloud of smoke. Surender embraced his wife and children happily. Vandana said that she would celebrate the occasion by making dozens of ladoos and sharing them. Surender reluctantly agreed.

miser – a person who loves wealth for his own sake and spends as little as possible; stingy,
barn – building for storing grains, hay, etc.
dowdy – dull, unfashionable
gruel – simple dish made of oatmeal
raisins – dried sweet grape
ingredients. – the list of items combined to make a particular dish
crave – to have a strong desire for something
drool – let saliva flow from the mouth with a wish to eat something.
rumble – make a deep, heavy, continuous sound
groan – deep sad sound, complain irritably
misery – great suffering or discomfort
appall – horror or deep shock
remorse – sense of regret for having done something wrong
crumb – a very small piece.
delight – great pleasure, joy
impostor – person pretending to be somebody else
solemn – done in a serious and committed way
hoard – carefully collected and guarded store of money or other objects
plunder – steal, rob
rage, wrath – violent or extreme anger
deceiver – person who misleads or misguides purposefully
reluctant – unwilling
ordeal – difficult or painful experience

The main aim is to provide quality education for the students of Class 8 English Karnataka State Board Solutions. Class 8 is very important for the students in their career. We hope the information provided in this KSEEB Solutions Class 8 English Chapter 19 The Miser Questions and Answers is satisfactory for all. Bookmark our site to get the latest information about the solutions.