Question 2.
How were the toys made in olden days?
Answer:
The toys were chipped away on a piece of wood in olden days.

Question 3.
How are the toys made in ‘Maya Organic’ now?
Answer:
In Maya Organic workers chip away on power lathes and make toys.

Question 4.
What is the opinion of Mr. Girish about toy making?
Answer:
Chennapatna toys are world-famous. They are protected as a geographical indication under the World Trade Organization. These toys are made out of ‘Aale Mara’.

Question 5.
How did the toy originate in Channapatna?
Answer:
Tipu Sultan loved children very much. He brought Persian toy makes to his kingdom. Persian toymakers trained local artisans. They left this wonderful art in our state.

Question 6.
What channapatna toys?
Answer:
The Channaptna toys are special because vegetable colours are used in them and sent to foreign countries. Channapatna toys have been given Geographical Indication. Under the WTO (World Trade Organisation).

a. What are the full forms of the following abbreviations? Find out from a dictionary or from, your friends.

b. With the help of a dictionary, write down some more short forms/abbreviations and their expansions: 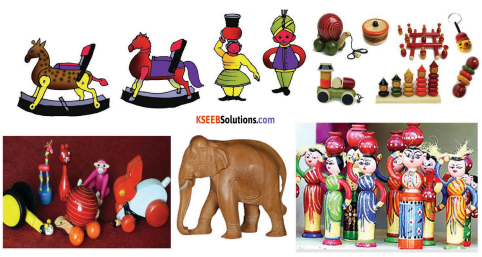 Introduction:
Channapatna is the name of a small town between Bengaluru and Mysuru. Channapatna is famous for its beautiful and colourful toys. These toys mainly attract children. Janap’ada Loka, a folklore centre, is near Channapatna. Here we can see articles or things used in olden days in farming activities. Kengal Anjaneya Swamy, a beautiful temple, is also near Channapatna.

It is near the home town of our late Chief Minister Mr.Kengal Hanumanthaiah. The temple attracts thousands of devotees from different parts of the state.

The lesson ‘Channapatna Toys’ is a narrative essay on the town of Channapatna and its glory. Two school-going sisters Divya and Muktha, saw the beautiful pictures of toys in a newspaper their grandpa was reading.

They pestered him to tell them a story about the toys. There Grandpa tells them that Tippu Sulthan was a famous and good ruler. Since he loved children very much, he brought Persian toymakers to his kingdom to teach and train local artisans to make beautiful toys.

Channapatna is also known as ‘Gombegala Ooru’. Once when grandfather had been to Channapatna he visited ‘Maya Organic’ an NGO (Non – Government Organisation. and saw Artisans working hard to earn a living from the wonderful art of making toys. The artisans made toys by chipping away on a piece of wood. 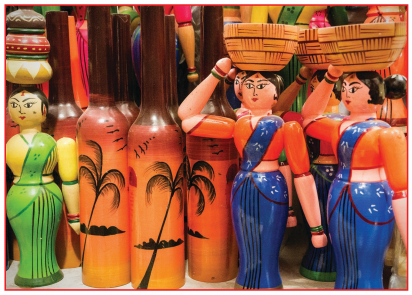 But now – a – days, artishans use power lathes to make toys. Channaptna toys are eco friendly because only .regetable colours are used to colour them. These toys are exported to many countries. The grandfather had also met Mr. Girish, who had eighteen years of toy-making experience. Mr. Girish had told grandpa that they were a family of toymakers and that they made ‘SadaBombe’ (plain toys without colours.

He also told Grandpa that these toys were world-famous and are also protected as a geographical indication (GZ. under WTO (World Trade Organization. (A Geographic Indication (GI. is a sign that identifies a product as originating from a particular location which gives that product a special quality or reputation Eg: Daijelling tea] Channapatna toys are made out of Aale Mara (Ivory, wood. or Wrightia tinctoria tree.

The government of Karnataka is supporting and helping the toymakers. Karnataka State
Handicrafts Development Corporation (KSHDC., conducts toy-making workshops and Training. The government has set up a lacquerware craft complex on Tatte kere Road, Channapatna.

Other than the colourful toys, Channapatna is famous for.rits Anjaneya Swamy temple at kengal just beside the Bengaluru – Mysore Highway. The former chief minister of Karnataka, Shri. Hanumanthaiah, who hails from kengal, renovated this temple.

Other attractions of Chennaptna are the Janapada Loka near Ramanagara. It is a museum for the folklore, of rural people. Janapadaloka was established by Dr.H.L. NageGowda. Here young village artists are, trained in folk arts.

After listening to their grandpa, the two sisters, Divya and Muktha, decide to visit Channapatna and Ramanagara during the summer vacations. 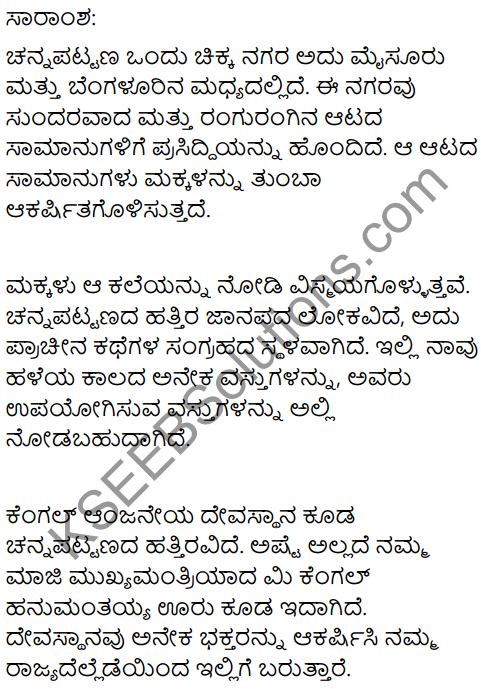 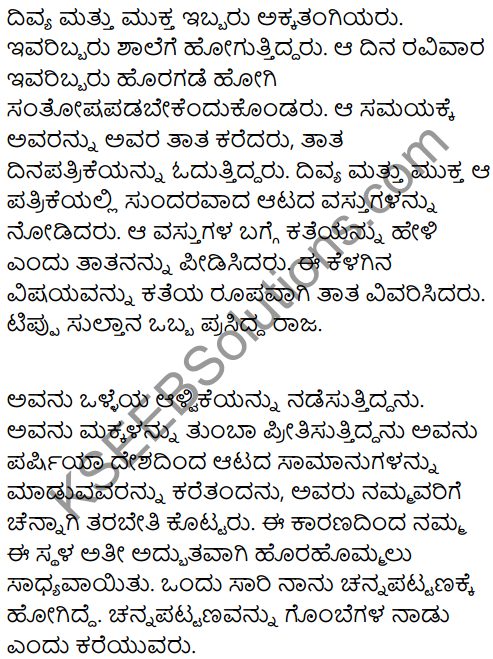 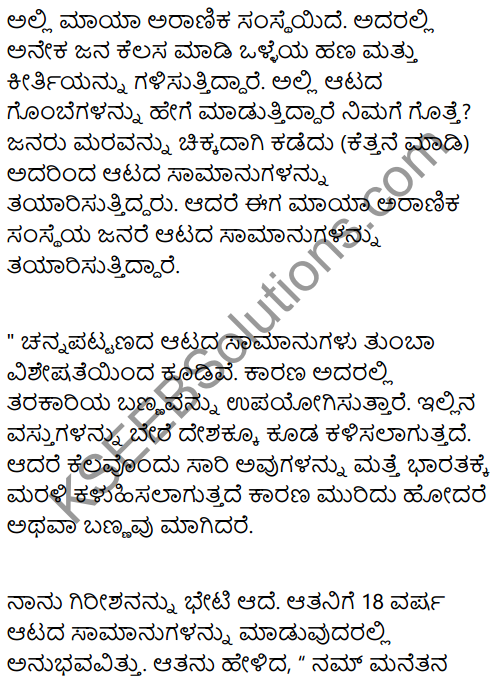 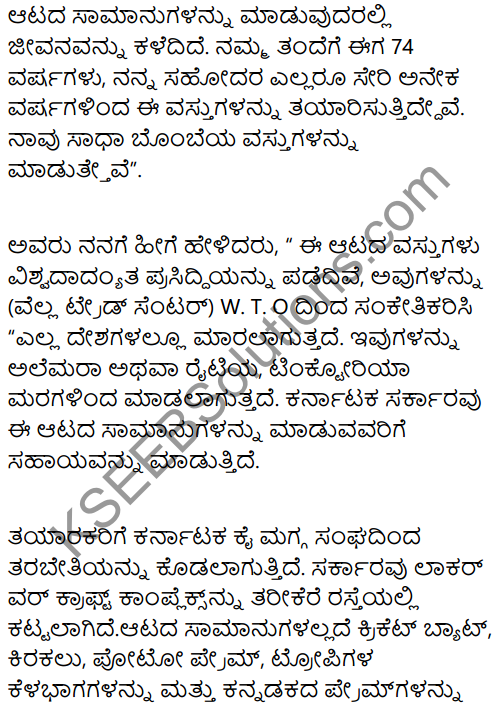 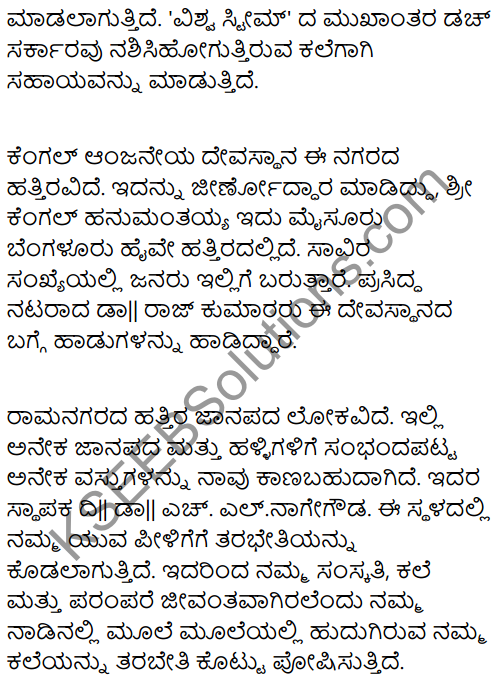 wonder: surprise
wander: roam
exquisite: very beautiful and delicate
pester: trouble with persistent requests
origin: the point where something begins
NGO: Non – Governmental Organisation
lathe: a machine for shaping pieces of wood by turning them against a cutting tool
foreign: of a country of a language other than your own
lacquerware: a hard glowy varnish
spectacles: a pair of glasses
renovate: restore to a good condition or repair
found: establish, build.

Hope the information shared regarding KSEEB Solutions for Class 6 English Chapter 2 Channapatna Toys Questions and Answers is true and genuine as far as our knowledge is concerned. If you feel any information is missing do react us and we will look into it and add it accordingly.