KSEEB Solutions for Class 6 English Prose Chapter 6 Where There is Will, There is a Way

Karnataka State Board Class 6 English Prose Chapter 6 Where There is Will, There is a Way

Where There is Will, There is a Way Questions and Answers, Summary, Notes

Do you know what a website is? A website is a place on the Internet where you can find information about something.

Dr. Vinod Sena, a visually challenged man, has developed a website for the blind. Listen to your teacher to know more about Dr. Vinod Sena.
Answer:
Beethoven, the great composer, was deaf. Bob Mathias, the great Olympic decathlon winner, was once a cripple. He was only seventeen years of age when he completed in the 14th Olympiad in London in 1948 and won laurels.

A handicap is no impediment to greatness. An example of this is Dr. Vinod Sena, a retired English professor from Delhi University. Dr. Sena, a visually challenged person since infancy, is the brain behind developing a website. It is no ordinary website, but a ‘site (sight) for the unsighted’. The extraordinary feature of the website is that it can be navigated without a mouse. With text-to-speech software, it becomes audio-based and it can be used by the visually challenged without sighted help.

Question 1.
Name the specially-abled persons mentioned in the passage and their achievements.
Answer:

Question 2.
Who is Dr. Vinod Sena?
Answer:
Dr. Vinod Sena is a retired English Professor from Delhi university. He is a visually challenged person since infancy.

Question 3.
Describe the website developed by Dr. Vinod Sena.
Answer:
Dr. Vinod Sena is the brain behind developing a website for the blind – ‘stie (sight) for the unsighted’. The extraordinary feature of the website is that it can be navigated without a mouse. With text – to – speed software, it becomes audio-based and it can be used by the visually challenged without sighted help.

Question 4.
Do you know any other specially-abled persons who have done great things in their lives? Describe the achievements of such persons.
Answer:
Stephen Hawking: Suffers from rare motor neuron disease and speaks with the help of a voice synthesizer. In 2009; he lost his control over his arms, legs, and voice and in 2009 he became totally paralyzed.

Stephen Hawking is the most brilliant scientist alive. This wheelchair-bound physicist was Cambridge University’s first Gravitational .physics professor and received the ‘Lucasian professor of Mathematics Award’. He has published a book called ‘A Brief History of Time – From Big Bang to Black Holes”.

C1. Complete the following statements by choosing the right answer from the four alternatives given:

C2. Read the lesson and find the answers for the following questions or say the answers orally:

Question 3.
To which country did Wilma belong?
Answer:
Wilma belonged to the U.S.A.

Question 4.
What was the doctor’s recommendation to improve Wilma’s legs?
Answer:
The doctors recommended regular messages to get her limp leg back to normal.

Question 5.
What happened to Rafer’s left leg?
Answer:
Rafer Johnson’s legs were crushed in a machine when he was twelve years old.

Question 6.
List out the events in decathlon.
Answer:
Decathlon is a competition where athletes take part in ten separate events. They are

C3. Discuss in groups and answer the following questions:

Question 3.
How did Wilma’s family help her?
Answer:
When Wilma was bedridden with polio, the doctors recommended regular massages to get her limp leg back to normal. Each member of her family took turns to massage her limp leg and gradually she was able to walk.

Question 4.
How did Rafer suffer as a boy?
Answer:
When Rafer Johnson was twelve years old, his left leg was badly crushed in a machine. The tip of one of his toes was hanging out as though it would fall off. The surgeon who treated him feared that the entire leg might have to be cut off. Rafer was upset. He lay in bed and prayed to God for his mercy.

Although the surgeon could save his leg, it did not heal completely. Despite his weak left leg, he took great interest in sports. He often had difficulty in wearing spiked shoes. He did stop the regular practice.

Question 5.
What do you learn from the lives of these two great athletes?
Answer:
We learn that despite their disabilities the two athletes had the willpower, patience, and preservance to overcome their weakness and achieve their goal. Both these champions had a dream and they set themselves a goal to achieve their dreams. They worked with a will to reach their goal and make their dreams a reality. Their determination to achieve their goal made them famous athletes.

Question 6.
Have you met anyone who has made great achievements in his/ her life? Tell your friends about him/her.
Answer:
Yes.

C4. Arrange the details given below in sequential order and rewrite them as a paragraph.

V1. Who are the following?

V2. Complete the following paragraph choosing the correct word from those given in brackets:

All the students of class VI went to the stadium. Some (Some, Sum) of them participated in individual events, a few of them in group events and the remaining went to cheer up their (there, their) friends. Rohit was a good runner. When the race (race, rays) began, all his friends knew (new, knew) that he would (would, wood) win. In the finals, Rohit won (one, won) the first prize (prize, price) and became the overall champion.

V3. Read the words given below and circle the words that do not belong to the group: 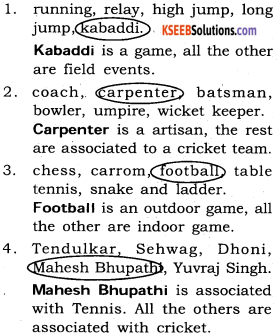 V4. Match the awards with the achievements for which they are given:

V5. Write any four famous players you know who play the following games: 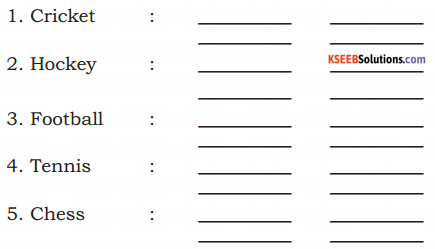 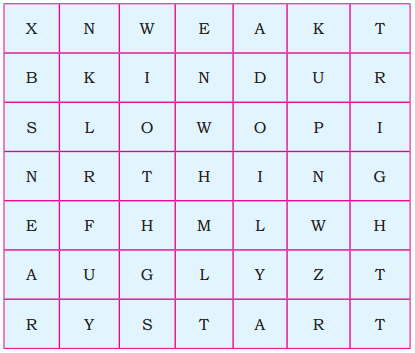 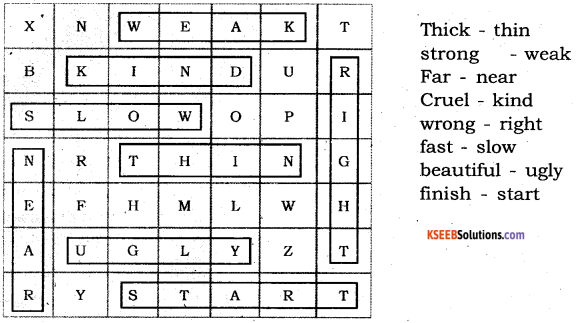 V7. (a) Complete the phrases and sentences given below. You can select words from the cloud: 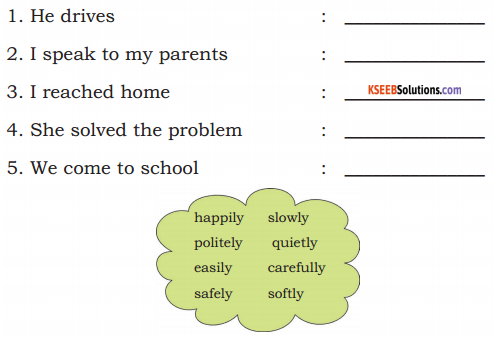 (b) Can you make similar sentences? Complete the following:

W1: This is Rohit’s family. See what each one does to stay healthy:

Using ‘and’ or ‘but’ make as many sentences as you can about Rohit’s family. One example has been given for you.
Example: All the members of Rohit’s family get up early in the morning. Grandfather is walking but Rohit is jogging.
Rohit’s father is a fitness freak. He lifts weights for half an hour daily in the morning. Rohit’s sister wants to stay slim. She skips too times daily but his mother does yoga exercises.

W2. Look at the pictures and write the names of the sports/games in the space provided. Discuss in pairs how these games are played. 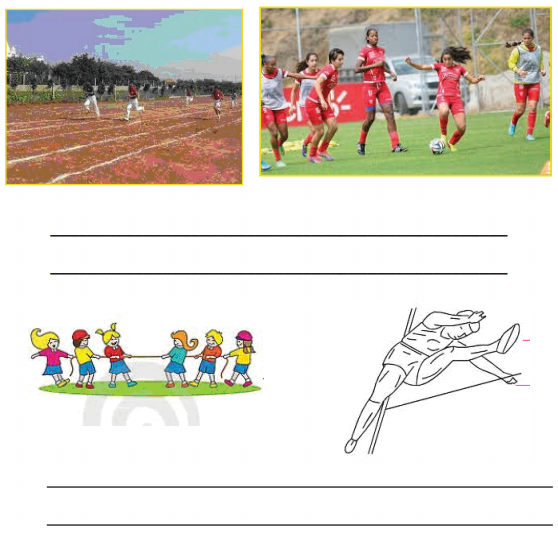 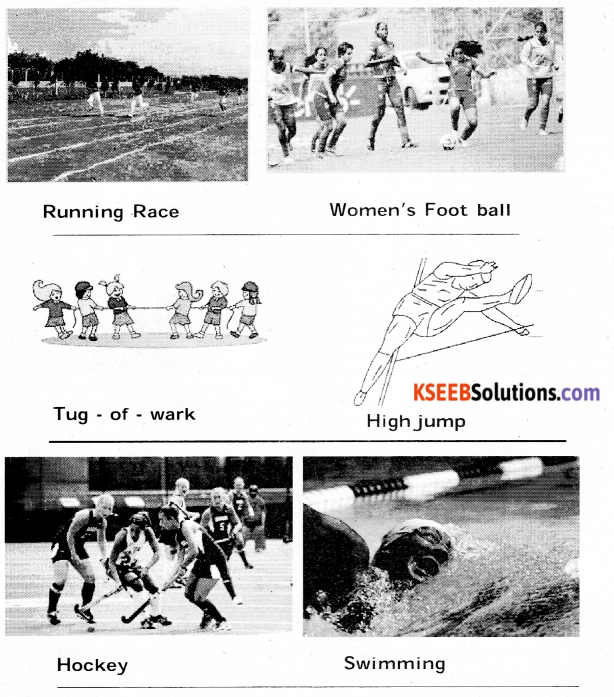 W3. Read the phrases given below. Some of them apply to Wilma, some to Rafer, and some to both. Write them in the correct columns:

an Olympic player, suffered from polio, comes from a large family, deeply religious, won ten ……………, a great sprinter, a victim of the disease. A victim of an accident, strong-willed, active and hard-working, physically challenged.

A. Some situations are given below. Read them and respond suitably. The first one is done for you :

Where There is Will, There is a Way Summary in English

The given lesson ‘Where there is a will, there is a way’ is the story of two athletes who have achieved their best, in spite of their physical challenges.

One such competitor was Wilma Rudolf of the U.S.A. She is famously known as the ‘Black Gazelle’ Wilma belongs to a large Negro family, being the fourteenth child, she was very weak at birth. She was afflicted by Polio at the age of four and was bedridden for two long years. The doctors recommended regular massages to get her limp leg back to normal. Every member of her family took turns to massage her leg. In course of time, she was able to walk but needed special shoes.

Despite her handicap, she grew up playing basketball for her school. She hoped to be a great basketball player one day. An athletics trainer happened to meet her one day. He saw that she had the potential to become a sprinter. He coached her and helped her to join the American Olympic team that went to Melbourne. At the next Olympics, she became a superstar by winning three gold medals. She used to joke that she could run fast because her family was large and she needed to reach the dinner table first.

Another such differently-abled champion was Rafer Johnson. His left leg was badly crushed in a machine when he was twelve years old. The tip of one of his toes was hanging as though it would fall off. The doctors feared that they would have to amputate his entire leg. But his prayers to God and his determination to survive saved his leg but did not heal properly.

In spite of a weak – leg, Rafer took a great interest in sports. He found it difficult and uncomfortable to wear spiked shoes but he never stopped the regular practice. He was selected for the Olympics. He won the gold medal for the decathlon and was declared the greatest all – found athlete of the world. Both, Wilma Rudolf and Rafer Johnson strived to make their dreams a reality and became famous athletes.

Where There is Will, There is a Way Summary in Kannada 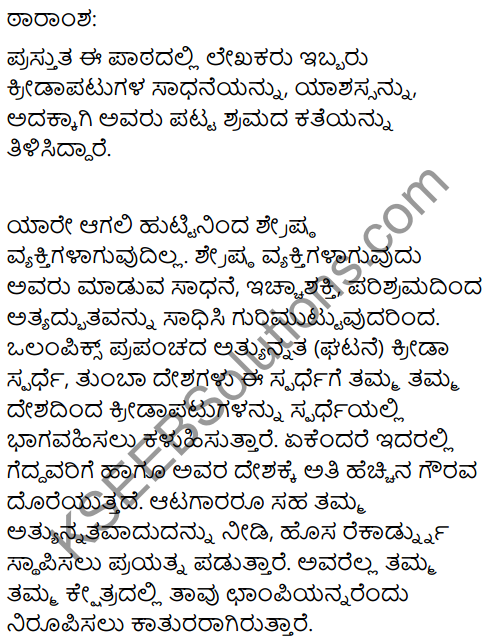 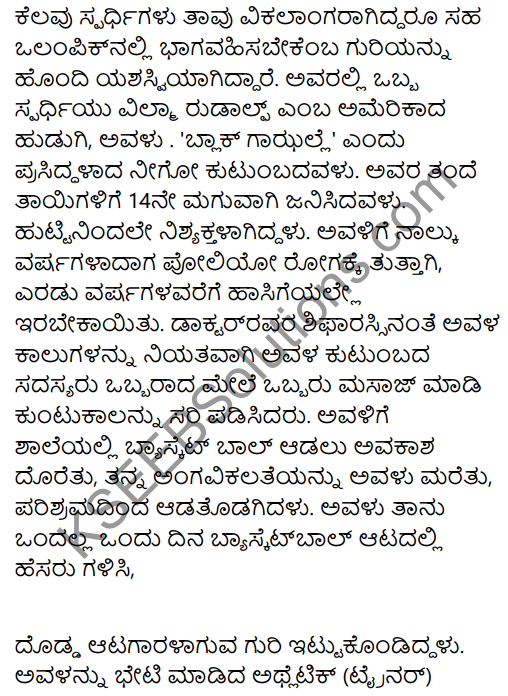 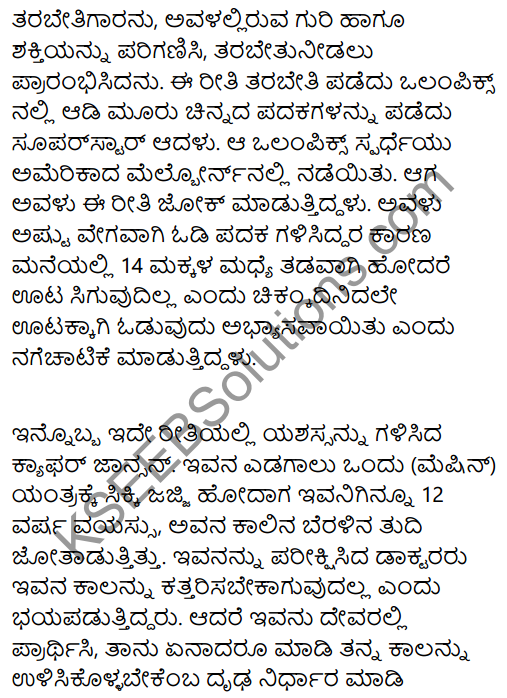 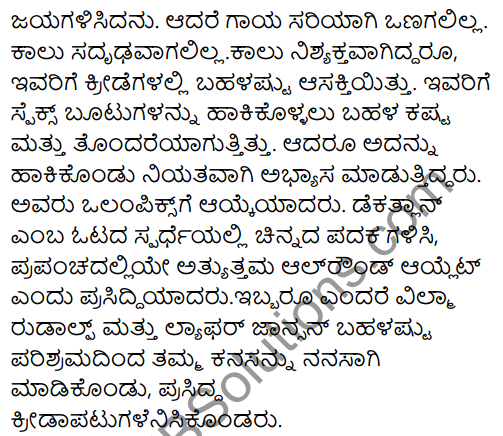 Hope the information shared regarding KSEEB Solutions for Class 6 English Chapter 6 Where There is Will, There is a Way Questions and Answers is true and genuine as far as our knowledge is concerned. If you feel any information is missing do react us and we will look into it and add it accordingly.