The Boss Who Cares Questions and Answers, Summary, Notes

Work Done By ISRO: ISRO (Indian Space Research Organisation) is the space agency of Government of India. Its Headquarters is in Bangalore. Here the scientists work to develop space technoloy for national development.

DRDO (Defence Research And Development Organisation) Ls an agency which does military research and development. It has 52 Laboratories were scientists are engagd in developing defence technologies. It has developed a missile Named “Prithvi’ in 1980 and Akash, Trishul and Nag Missile in 2010.

Task B: Look at this word – SATELLITE. How many smaller words can you make from this one word?
Sat, Salt. TELL, LITE, ATE, LIT, TALE, ALL

V1. Choose the opposites of the following words from those given in brackets.

V2. State whether the following statements are ‘True’ or ‘False’

1. Dr Abdul Kalam is presently the President of India. (False)
2. Hetookcareofallthescintists (True)
3. He visited the exhibition because he liked it. (False)
4. The scientists were happy to work under him (True)
5. Thumba is in Karnataka. (False)

C1. Answer the following questions in a sentence or two each.

Question 5.
When did the scientist leave the office?
Answer:
Scientist left the office at half-past eight in the evening.

Question 6.
What did he think on his way home?
Answer:
He remembered the promise he had made to his children. He was feeling sad for having disappointed them. He wondered how he would calm his wife.

Question 7.
How did his wife react when he entered the house?
Answer:
She reacted calmly.

Question 8.
What did she ask him?
Answer:
She asked “Would you like to have a cup of coffee or shall I straight away serve dinner, if you are hungry”

Question 9.
Where were the children?
Answer:
Children went to exhibition with Boss.

C2. Discuss with your friends and answer the following questions in five to six sentences each.

Question 2.
What do you think the scientist thought on the way home?
Answer:
The scientist was feeling guilty for having disappointed his children and wondered how he would pacify his wife.

Question 3.
When the scientist returned home, his wife was very calm. The scientist did not expect this, why?
Answer:
He didn’t take children to exhibition. He expected his wife would be angry and quarrel and the children would have cried in disappointment.

Question 4.
What do you want to say about the boss?
Answer:
The boss was very understanding and treated all the scientist’s as his own family.

L1. Fill in the blanks with the correct verb forms of the words given in brackets.

There are two sounds of‘th’
‘th’ as in ‘bath’
‘th’as in‘mother’
LookatThanu. what a girl?
Something in her tickles people to mirth.
See her father and mother.
And Karthik, her brother
There’s no one like them on the earth.
Pick the two sounds of ‘th’ from the lesson, ‘The Boss who cares’.
Answer:
a. Thumba space centre
b. But they were all happy under their boss and did not think of quitting the job.
c. One of the scientists came to his boss.
d. I have promised to take my children to the exhibition.
e. He never even bothered to look at the watch.
f He boss was not there
g. On the way home
h. That is why all scientists at Thumba work under their boss.
i Guess who the boss was?
j. None other than Dr API Abdul Kalam.
k. Thiruvanthapuram

The Boss Who Cares Summary In English 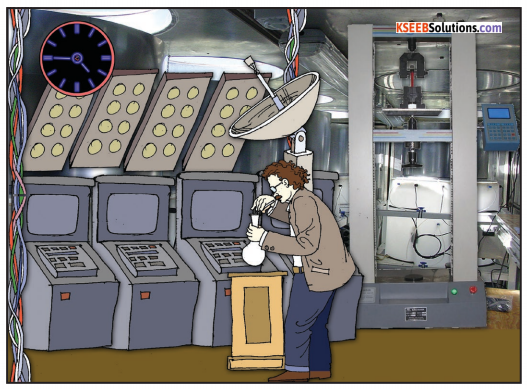 The given Lesson ‘The Boss Who Cares’ is about a boss who takes great care of his subordinates (those working under him) There were about seventy scientists working at Tumba space centre. (Thumba is a village near Thiruvananthapuram in Kerala).

A space centre is a place where studies are conducted about outer space of the earth The scientists were involved in developing rockets which was a very daring task. They had to dedicate all there time to their profession. But they never thought of leaving their job, in spite of the hardship they faced. 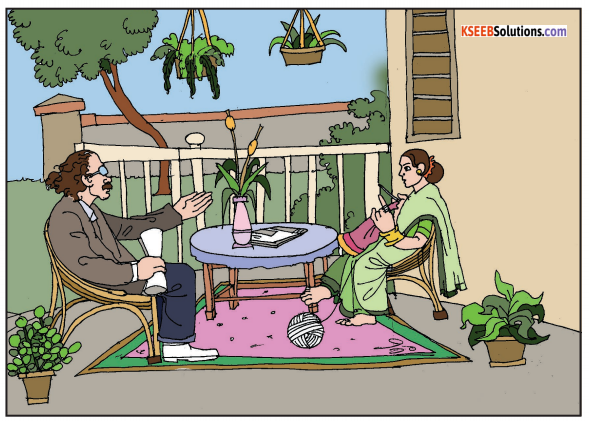 One day, one of the scientists working there came to his boss and requested him to allow him to leave the office at 5.30 pm in the evening. He had promised his children to take them to – an exhibition in the town, that day. His boss agreed, the scientist was happy and began to work enthusiastically and never even bothered to look at his watch. When he had completed his work he found that it was 8.30 pm in the evening. 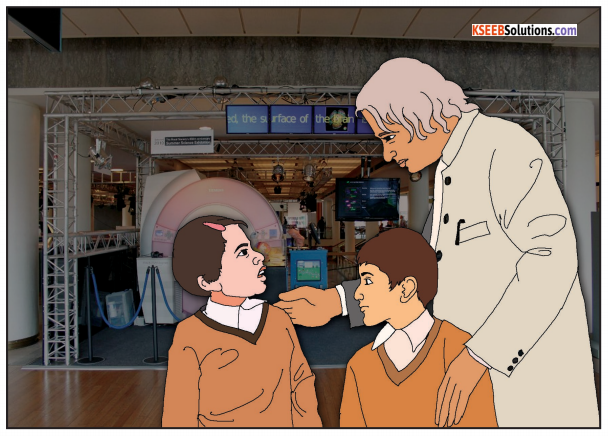 As his boss had already left, he left for home. He remembered his promise to his children and felt sad for disappointing them. He also did not know how he could pacify his wife.

The Boss Who Cares Summary In Kannada 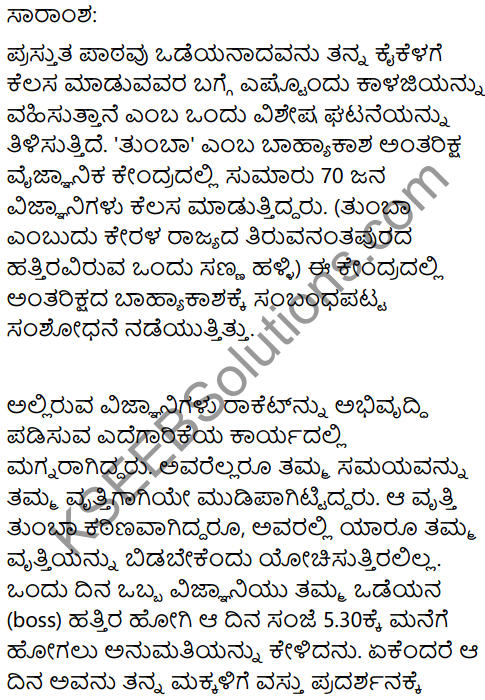 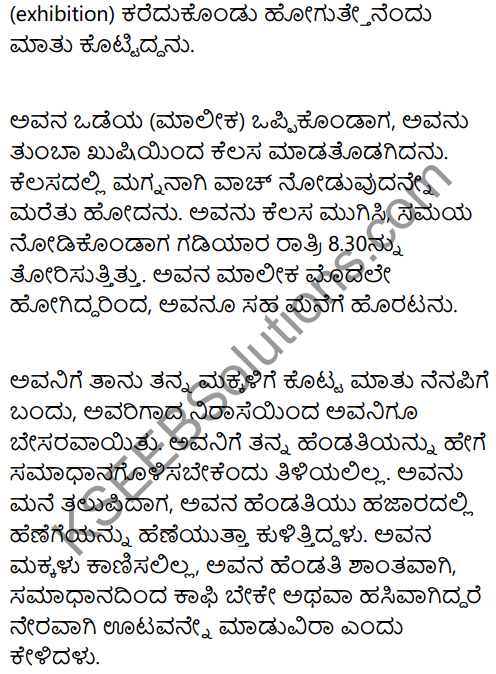 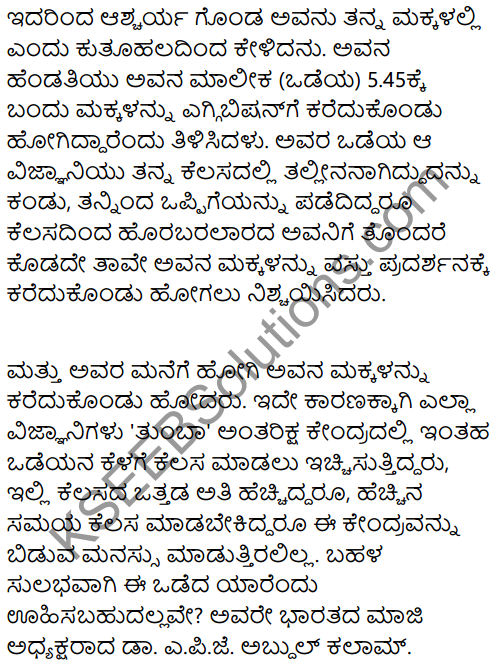 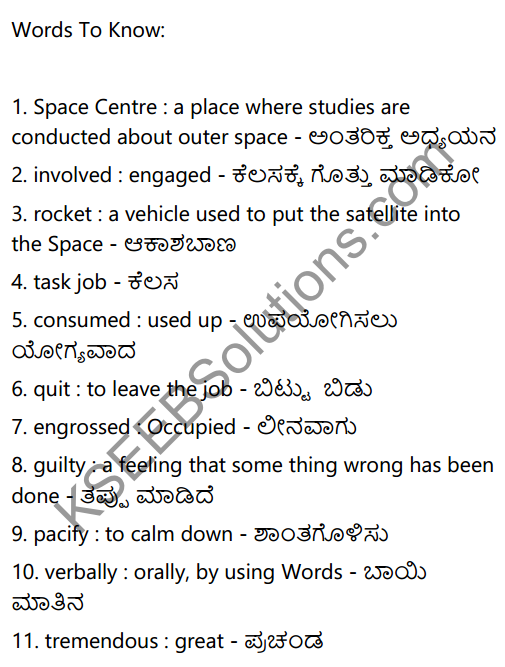