I. Fill in the blanks with appropriate words :

The Place Of Jesus Certification Is KSEEB Solutions Question 3.
The birth place of Mohammad Piagamber is ________
Answer:
Mecca.

II. Discuss with your friends and write answers to the following questions.

KSEEB Solutions For Class 9 Social Christianity And Islam Question 1.
Write a note on the life of Jesus Christ.
Answer:
Jesus was born at Bethlehem,5 kms away from Jerusalem in Judea Province. His father and mother were Joseph and-Mary. About his early is not known much. He was baptised by John at the age of 30. After he was baptised, he started travelling throughout the country preaching religious life.

He had twelve disciples called as “Apostles”. Of them Peter was the first apostle.Jesus spent his life serving the poor suffering from poverty and diseases. Jew fundamentalists felt jealous of his popularity and started opposing him for his rejecting the religious dogmas. The Jewish police arrested him and handed him over to the Governor Pontius Pilate. He ordered Crucifixion of Jesus.

On Friday, the 7th April of 30 B.C. Jesus was crucified on the hillock of Golgotha by Roman soldiers. Thus his life was ended.

9th Social Notes KSEEB Solutions Question 4.
Write a note on the life of Mohammed Paigambar.
Answer:
Mohammad Paigambar wasborn at Mecca in 570 A.D. Abdulla and Ameen were his parents. He lost his parents at the age six. He grew up under the care of his uncle. He joined service in a rich widow’s house. Later he married that widow. In course of time they had two sons and four daughters.

Mohammad started to meditate in a cave in Mecca. Therein his deep meditation an angel’s voice heard to him. The angel said that Mohammad was the Prophet of God (Allah). Later he became the prophet of Allah and began to preach the Divine Gospel. His followers compiled his preachings and published in the form of book called Quran. Then it became the scripture of Islam. In the year 622 A.D. He travelled from Mecca to Medina. This journey became popular in history as “Hijira”. After some period he returned to Mecca and breathed his last there.

Christianity And Islam 9th Standard Pdf KSEEB Solutions Question 5.
What is “Hijira’ ?
Answer:
Theorthodox community of Mecca opposed the Prophet Mohammad.Due to this he could not preach in Mecca any more. In the year 622 A,D., he travelled from Mecca to Medina. This journey from Mecca to Medina became popular in history as ‘Hijira’. 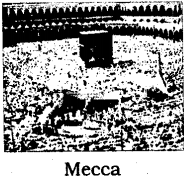 KSEEB Solutions For Class 9th Social Science Question 6.
What are the teachings of Islam?
Answer:
The rules and regulations to be followed by every Muslim: