Karnataka Solutions for Class 9 English Chapter 5 Justice Above Self

By understanding the academic needs we have prepared the Karnataka State Board English Class 9 Solutions Chapter Wise. Our aim is to help the students by providing the question and answers chapter wise and help them to gain a good score in the exams.. Before you start your preparation go through the chapters covered in this academic. So go through them and Download KSEEB Solutions for Class 9 English Chapter 5 Justice Above Self Question and Answers Pdf for free.

Justice Above Self Questions and Answers, Notes, Summary

Justice Above Self Question 1.
How was the bond of friendship between Jumman and Algu?
Answer:
Jumman Shaikh and Algu Chowdhary were good friends. Both of them believed each other. When either of them went away from the village, the other looked after his family. People respected both very much.

Justice Above Self Question Answer Question 4.
What made ‘the old lady angry?
Answer:
When she was insulted. Jumman took the side of his wife. He didn’t support her. Apart from this, Jumman advised his aunt to be patient and keep mum. This made the old lady angry.

Justice Above Self Notes Pdf Question 5.
How did people react to the old lady when she went about explaining her plight?
Answer:
Some people sympathized with the old lady. A few others advised her to make it up with her nephew and his wife.

Justice Above Self Summary In Kannada Question 1.
Who did Algu sell his bullock to?
Answer:
Algu sold his bullock to Sahu a cart driver of the village.

Think about the Text

C1. Each of the following extracts had three questions. Give pointed answers to them in a phrase or a sentence. Discuss the answers with your partners.

Class 9 English Chapter 5 Summary Question 4.
‘He brought us nothing but ruin’
a) Who said this?
b) Who was this said’To?
c) How did ‘he’ bring ruin to his owner?
Answers:
a)Sahu, the cart driver of the village said this.
b)This was said to Algu.
c)He brought ruin to his owner by death.

C2. Think over the following questions and answers:

9th Standard English Justice Poem Summary Question 5.
Discuss in groups how old people should be cared fbr. Write down the outcome of your discussion in four or five sentences.
Answer:
Now a days, in our society old people are not treated well either by their children or their relatives. They are looked down upon by the young generation. It is the question of the humanity. The young generation should think that they were also like them in their childhood.

We should seek their advice which is fruitful in our life. Therefore we should take care of the old people carefully inrespect of their health condition, we should render sincere service to them.

Fill in the blanks using the correct word given in brackets.
Answer:
A hunter went to a forest in search of a game, there (their, there) he saw a deer (deer, dear) behind a big tree. He aimed his arrow at it. But the alarmed animal started running. The hunter ran for long but he could not sight the animal. He was greatly tired. He knew new, knew) he could no more continue and needed some (some, sum) rest. He rested (wrested, rested) under a shady tree and soon feel asleep.. It was night (night, knight) when he woke up. He accepted (excepted, accepted) his failure in catching the animal and returned home empty handed.

Use the following clues:
Father ill ………. studies hampered not his/her mistake ………….. failure is not the end of eveiything ………… try again will come out with flying colours ……………. ready to give help.
Answer:
My father was ill. I had to take care of him. My studies were hampered and I failed in the examination. It was not my mistake, but it was due to my father. My father after recovering from illness advised me to try once again, and that success would come with flying colours. He assured of me that he was ready to give help.

Figure of Speech:
1. Though wrapped in black packs …………. like gold stains bounden mud’
2.‘She is cool like ice ………… And still like rock’
3.‘Like rat caught in the sack of death, Like deer, caught in the lion’s lair ………..
The above lines are examples of simile.
(A simile is a figure of speech in which two different objects having at least one thing common are compared directly using ‘like’, “So’or‘as’.

Task-1: Collect and read similar newspaper excerpts that speak of injustice method out to innocents or that tell you about justice done to the people who are just, righteous and honest.
Answer: –

Answer:
My friend is always soft-spoken because he is gentle. He is honest and extends his helping hand. He is always helpful. He gives importance to the discipline. Because he himself is disciplined. He believed God and he is god fearing also. He is neat, clean and tidy.

Task-2: Writing dialogues.
Answer:
Jumman: It is very kind of you. I am always grateful to you.
Algu: Don’t say so. It is my duty and
apart from this, I love you as a friend very much.

Justice Above Self Additional Questions and Answers

Four alternatives are given below each question/incomplete statement. Choose the most appropriate one :

Question 1.
Who is the writer of the story “Justice above self’
Answer:
Dhanapat Rai.

Question 2.
Why did aunt demand a monthly allowance from Jumman?
Answer:
Jumman and his wife became indifferent to aunt after two years. They grudged even the little food that the old lady needed for survival. She swallowed these insults along with her food for some time. A few months later, she demanded Jumman for a monthly allowance to set up a separate kitchen.

Justice Above Self Summary in English

The lesson ‘Justice Above Self” is written by Munshi Premchand. This is the story of two close friends, namely Algu and Jumman. They were good friends. Their friendship was so strong that when either of them went away from the village, the other looked after his family. Both were greatly respected in their village. Jumman had an old aunt, she had some property in her name. She transferred her property to Jumman so that she would stay with them and he would look after him. A couple of years went well. But thereafter the situation changed.

Jumman and his wife were tired of the old woman. He and his wife were indifferent to her. The old woman was not served even a little food to survive. Besides the old woman suffered from starvation, she had to tolerate insults. A fee months after the old woman decided not to live in Jumman’s house. One day she told him her intention that she was going out of his house to live separately and asked him to give her monthly allowance so that she could set up a separate kitchen. Jumman Shaikh argued on behalf of his wife, as she knew best to run the house. This made the old woman angry.

The old woman took the case to the village Panchayat and spoke to Algu Chowdhary. Algu Chowdhary did not know what to do, because Jumman Shaikh was his best friend. He could not go against his friend. The old lady asked Algu to come to the Panchayat and give her fair justice. In the Panchayat meeting all members gathered. After consulting others Algu pronounced that they were of the opinion that Jumman must pay his aunt (the old lady) a monthly allowance, or else the property went back to her. The verdict of Algu made his friend angry and somewhat insult. After this the bond of friendship between Algu and Jumman was broken. Jumman saw Algu as an enemy and wanted to take revenge.

Days passed. Due to his ill luck, Algu was in trouble. He had to face it. Therefore he sold one of this bullock to Sanju Sahu, a cart driver of the village. The understanding was that Sahu would pay the price of the bullock in a month’s time. It so happened that the Bullock sold by Algu, died written a month several months since the death of bullock, Algu reminded Sahu of the money he had not yet paid.

But Sahu firmly told him that he could not pay him a penny for the wretched beast he had sold him, he brought us nothing but ruin. He did not argue with him. He decided to the case to the Panchayat.

The Panchayat was held under the old banyan tree. Algu told before the Panchayat that the voice of the Panch was the voice of God and he said that he would abide by the decision of the panch, whoever he might be.

The authority of nomination of the Panch was given to Sahu. Thinking it a good Sahu proposed the name of Jumman. Algu’s heart sank and turned pale. Jumman became the head panch. He realized his responsibility as a judge and the dignity of his office. It was a good chance for Jumman to take revenge Algu. But Sahu decided not to allow his personal feelings to come in the way of speaking the truth and doing justice. On the day of the Panchayat meeting, both Algu and Sahu presented their cases. After hearing their cases Jummana announced that it was their opinion that Sahu should pay Algu the price of the bullock because when Sahu bought the bullock it had not suffered from any disability or disease. The death of the bullock was unfortunate but Algu could not be blamed for it. On hearing the decision, Algu could not believe his ears because he had thought Jumman would take revenge. But it was not so happened. He shouted loudly as victory to the Panchayat and said that was the justice and God was there in the voice of the Pancha. Soon after this both friends embraced to each other and became close friends as they were before.

Justice Above Self Summary in Kannada 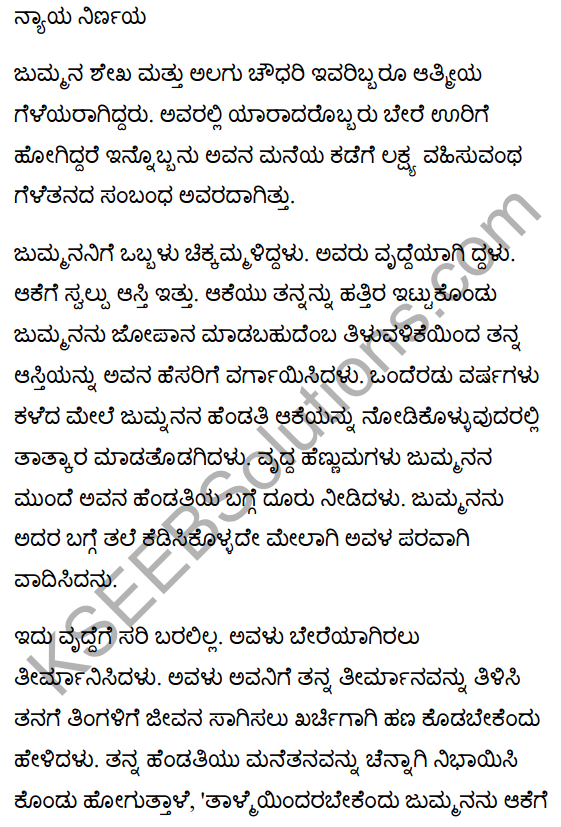 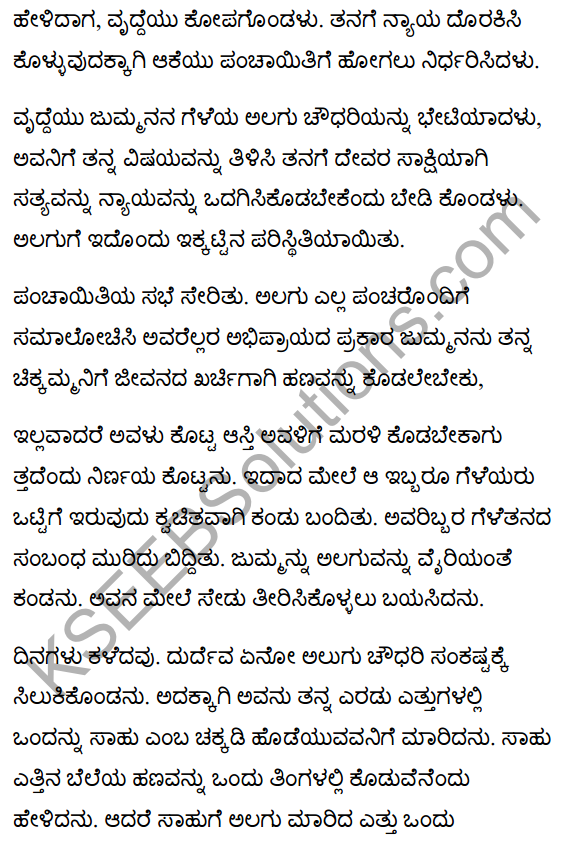 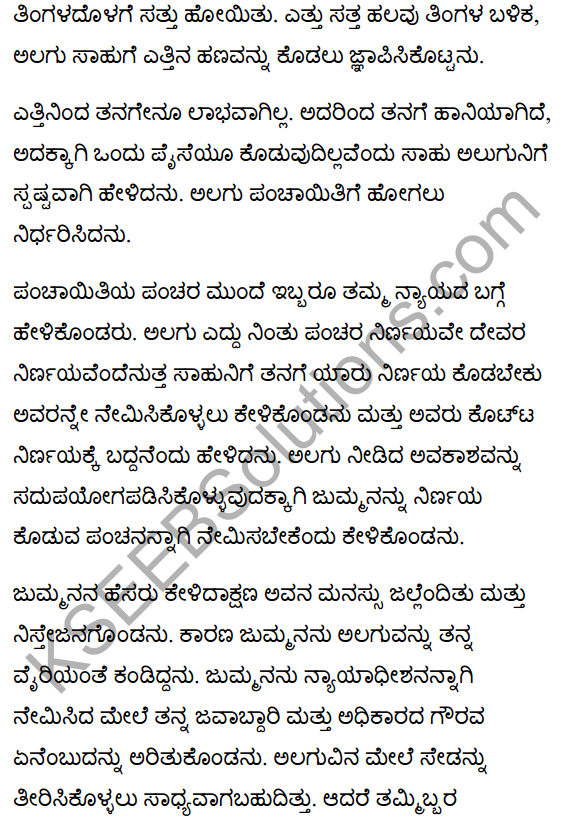 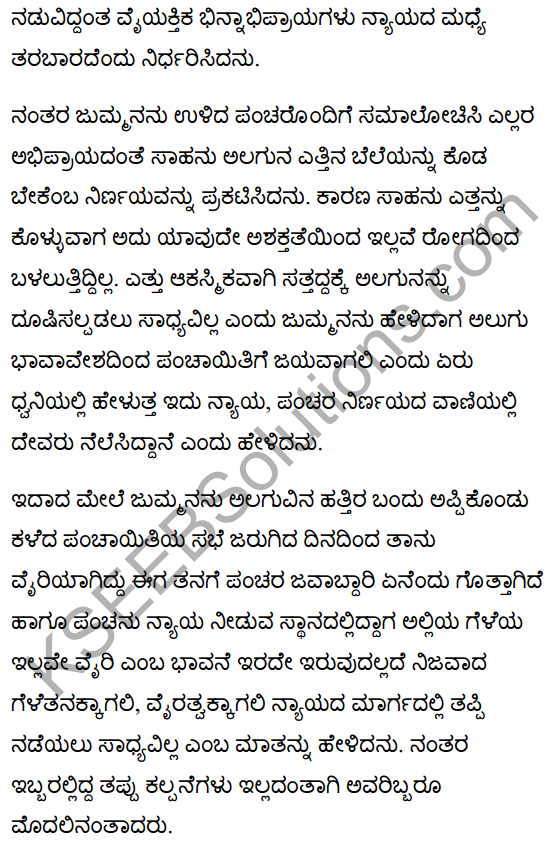 We hope the information prevailed in this article is helpful for all the students of Class 9. The Karnataka State Board Solutions for Class 9 English Chapter 5 Justice Above Self Question and Answers pdf enhance your skills and score good marks in the exams. Stay tuned to get the latest information about the KSEEB Solutions Class 9 English Solutions.