Students can Download Maths Chapter 11 Congruency of Triangles Ex 11.7 Questions and Answers, Notes Pdf, KSEEB Solutions for Class 8 Maths helps you to revise the complete Karnataka State Board Syllabus and score more marks in your examinations.

Question 4.
Let ABCD be a quadrilateral in which AD is the largest side and BC is the smallest side. Prove that|A <[C. [Hint: Join AC] 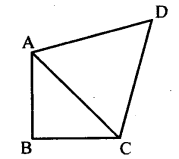