With the help of the Karnataka Secondary Education Examination Board Class 8 English Solutions Chapter 2 The Earthquake Questions and Answers Pdf, Notes, Summary you can get an idea about the subject. Also we suggest the students keep the textbook aside to learn the subject in depth.

I. Answer the following in a sentence or two:

Question 2.
Which event caused the crash?
Answer:
At that very moment, a huge ripe bel fruit fell right on the top of the palm shrub and caused a crash.

Question 5.
What did the lion guess about the cause of the crash?
Answer:
The lion, after listening to the hare, guessed that a ripe bel fruit might have fallen from above on to the palm shrub and had caused the crash.

II. Write the answers for each of the following in about 50-60 words :

Question 1.
It is said: ‘The mob cannot think.’ If so, how does this story illustrate that?
Answer:
Yes, I will agree with the statement. The hare lived under a small palm shrub at the foot of a bel tree. Once it misunderstood the crash of the falling ripe fruit on the leaves of the palm tree as earth is falling to pieces so it fled madly without looking behind. On the way, another hare followed it and another hare until a hundred thousand hares were all fleeing after it.

Then a deer, a bear, an antelope, a buffalo, a gozello, a rhinoceros, a tiger and an elephant all joined in the stampede followed by the whole race of each species. In this way gradually, the line of animals stretched out over a distance of about three miles.

Question 2.
Sum up what the lion did to verify the statement of the hare.
Answer:
When the lion saw the wild flight of animals it came to know that the earth was falling to pieces. He thought, probably the animals misunderstood some sound they heard. The first hare narrated what had happened, so the lion guessed the probability and it took the hare to the spot, which is the dwelling placed of the hare. There the lion inspected and found out the ripe fruit which fell on the leaves and concluded the real fact and there was no sign of any earthquake nearby. Like this, the lion verified the hare’s statement.

The Earthquake Additional Questions and Answers

Question 3.
The animal that did not join the race was the
A) lion
B) tiger
C) elephant
D) deer
Answer:
A) lion

The Earthquake Summary in English

The given lesson ‘The Earthquake’ is a folk tale. The narrator tells us that the story happened a long time ago, in a place near to the western sea. A hare lived under a small palm shrub at the foot of a Bel tree. One day, a strange fear struck the hare. It started wondering what would happen to him if the earth fell to pieces. At the very moment, a huge ripe bet fruit fell right on top of the palm shrub with a loud crash. The hare was horrified and thought that the earth was surely falling to pieces around him. He madly fled away from the place.

So the other hare also joined him and as they were running another thousand hares joined them when they heard that the earth was falling to pieces. Later a deer, a boar, an antelope, a buffalo, a gazelle, a rhinoceros, a tiger and an elephant joined them. The line of animals stretched to about three miles.

Later a lion saw this wild flight of animals and asked them what it was all about. When they told him that the earth was felling to pieces, the lion thought to himself that, since there was no earth quake, they might have misunderstood some sound they had heard and started fleeing. He decided to stop them as he feared they all of them would come to destruction.

The lion sprang swiftly to the foot o fa hill ahead of all the animals and roared thrice at the top of his voice. All the animals were frightened and huddled up together and stood still.

Then the lion asked them why they were running away. All the animals answered in chorus that they were running away because the earth was falling to pieces. When the lion asked them, who had seen the earth falling, the animals started to point at each other. At last the first hare which had started all this came forward and spoke to the Lion. The j hare narrated all which had happened till then. The Lion realized that the hare had heard a ripe bel fruit fall down on the palm leaf with a crash and started running away believing that the earth was falling to pieces.

The Earthquake Summary in Kannada 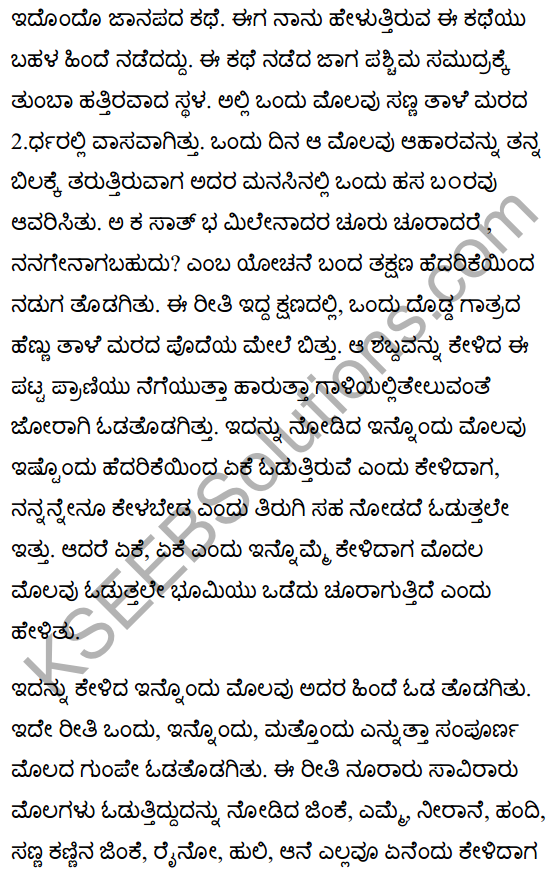 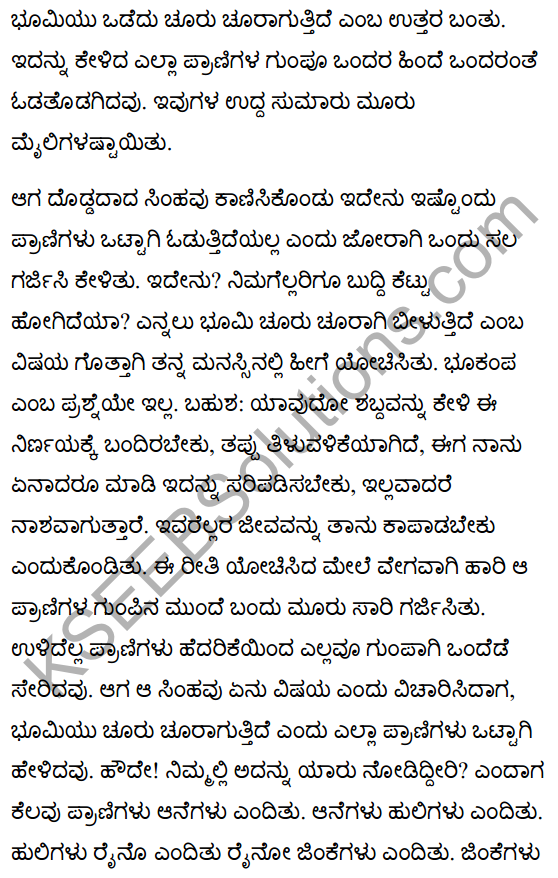 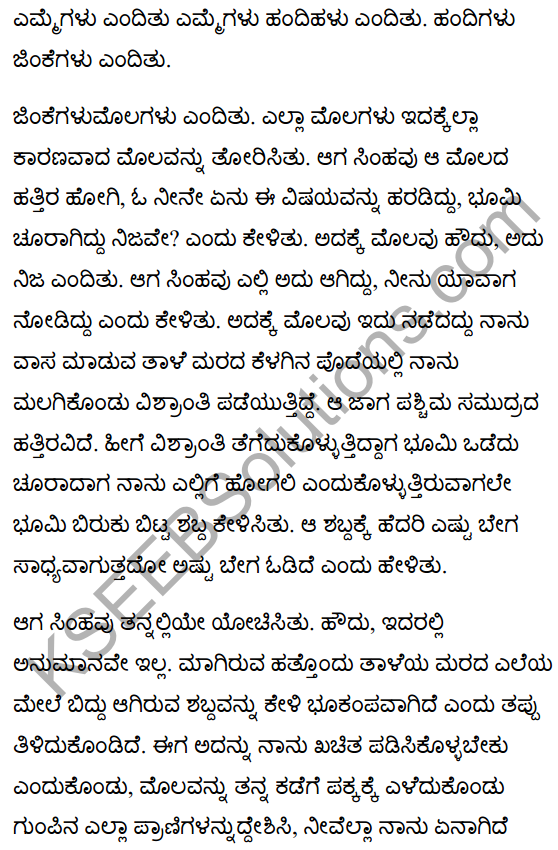 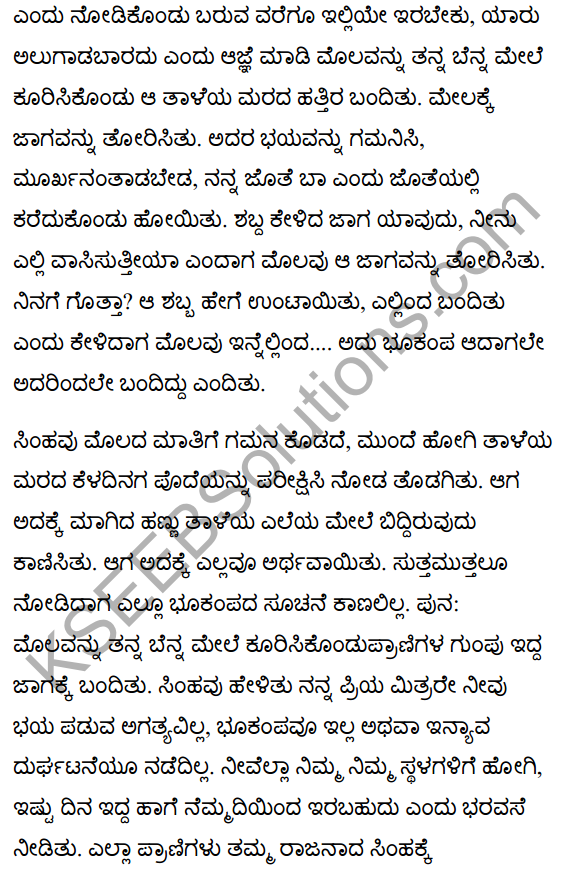 The main aim is to provide quality education for the students of Class 8 English Karnataka State Board Solutions. Class 8 is very important for the students in their career. We hope the information provided in this KSEEB Solutions Class 8 English Chapter 2 The Earthquake Questions and Answers is satisfactory for all. Bookmark our site to get the latest information about the solutions.