The Story of Dharmavyadha Questions and Answers, Notes, Summary

With the help of the Karnataka Secondary Education Examination Board Class 8 English Solutions Chapter 1 The Story of Dharmavyadha Questions and Answers Pdf, Notes, Summary you can get an idea about the subject. Also we suggest the students keep the textbook aside to learn the subject in depth.

I. Answer each of the following in a sentence or two:

Question 2.
Why did the housewife delay in giving alms of Kaushika?
Answer:
The housewife was attending to the needs of her husband who had come just then. She considered it her primary duty. So, she delayed in giving alms-to Kaushika.

Question 4.
Why did Kaushika feel stunned at the words of Dharmavyadha?
Answer:
When Kaushika came to Dharmavyadha shop he invited him heartily and asked him it the woman had sent him. By hearing these words Kaushika felt stunned.

Question 5.
What did Kaushika do after his visit to Dharmavyadha?
Answer:
Kaushika returned home and thereafter he spent his days in the service of his parents and in teaching others the Vedie lore he had mastered.

Question 6.
What did Sage Markandeya tell Yudhistira in the end?
Answer:
Sage Markandeya said that there were enlightened souls in all divisions of people who could guide even scholars and masters of Vedic teachings.

II Answer each of the following in a paragraph

Question 1.
Narrate how Kaushika felt on listening to the lady.
Answer:
Kaushika went to a town and stood before a house begging for alms. The lady of the house was attending to her husband. She took some time to bring alms to Kaushika. Kaushika became angry and glared at her. The lady said that she was not a crane to get burned up by his angry looks. Kaushika was startled. He wondered how she knew about the crane. She said that he had only mastered the Vedas but had not learnt the principles of Dharma. She advised him to go to Dharmavyadha and learn the mysteries of Dharma from him.

Question 2.
What are the essentials of Dharma, according to Dharmavyadha?
Answer:
According to Dharmavyadha the essentials of Dharma are to engage oneself in one’s inherent duty, to be truthful, to be patient and merciful, not to be elated in happiness or depressed in difficulties, to be engaged in prayer and tapas, to appreciate the good qualities in others, not to boast, to have bath in sacred rivers, to visit holy places and to serve our parents and the guru who has bestowed knowledge on us. These are the mysteries of Dharma.

Question 3.
What can we learn from the story of Dharmavyadha?
Answer:
Dharmavyadha was a meat seller. He was doing his family profession with all honesty and sincerity. He never lied, cheated or killed any animal. Though he was selling meat, he followed the simple path of Dharma. He was truthful, merciful and patient. He respected others. He served his Guru and parents. He considered it his primary duty to take care of his parents in their old age. We should also develop such good qualities.

The Story of Dharmavyadha Additional Questions and Answers

Question 4.
The story of Dharmavyadha was narrated by
A) Markandeya
B) Yudhishtira
C) Kaushika
D) the lady
Answer:
A) Markandeya

Question 5.
Kaushika realised that his Dharma is to serve
A) his parents
B) his teacher
C) the sage
D) Yudhishtira
Answer:
A) his parents

The Story of Dharmavyadha Summary in English

Long ago there lived a person named Kaushika. Although he was proficient in the veda’s he wised to surpass all in learning and left home to meditate and pursue studies, in the forest.

Once, when he was sitting under a tree studying Vedas, he was distracted by the loud twittering of a crane which was sitting on a tree, above him. Kaushika looked up and glared at the bird and it was reduced to ashes. Kaushika felt sorry for having caused the bird’s death but was also pleased by his ascetic powers.

He went to a nearby town to seek alms, and stood before a house and begged for alms The mistress was busy attending to her husband and took some time to bring him alms. When Kaushika glared at her, the lady smiled and said that she was not a crane which he could bum with his glare. Kaushika was astonished and wondered how the lady knew of the incident then the woman explained Kaushika, that he might have mastered the Vedas but he was ignorant of the mysteries of Dharma and asked him to go to Mithila to learn about the mysteries of Dharma from a men called Dhrmavyadha.

Kaushika then went to Mithila and met Dharmavyadha. Dharmavyadha was a meat seller. When Dharmavyadha saw Kaushika he warmly welcomed him and asked him if a chaste women had sent him to meet him. Kaustika felt humbed. He had always imagined that he was the only learned man. But he now realised that it was not so. Later Kaushika humbly requested Dharmavyadha to tell him about the mysteries of Dharma.

Dharmavyadha humbly told Kaushika that he could only tell him about the path he followed. He was of the opinion that one should engage oneself in his duties, be truthful, patient and merciful. One should not be elated in happiness or depressed in difficulties. One should always be engaged in prayers and tapas and should appreciate the good qualities in others. He also told Kaushika that though he followed the hereditary profession of selling meat he did not kill animals and had never uttered a lie and therefore had no enemies. He said that his foremost duty was to serve his parents with devotion because their blessings were like a shield to him.

The Story of Dharmavyadha Summary in Kannada 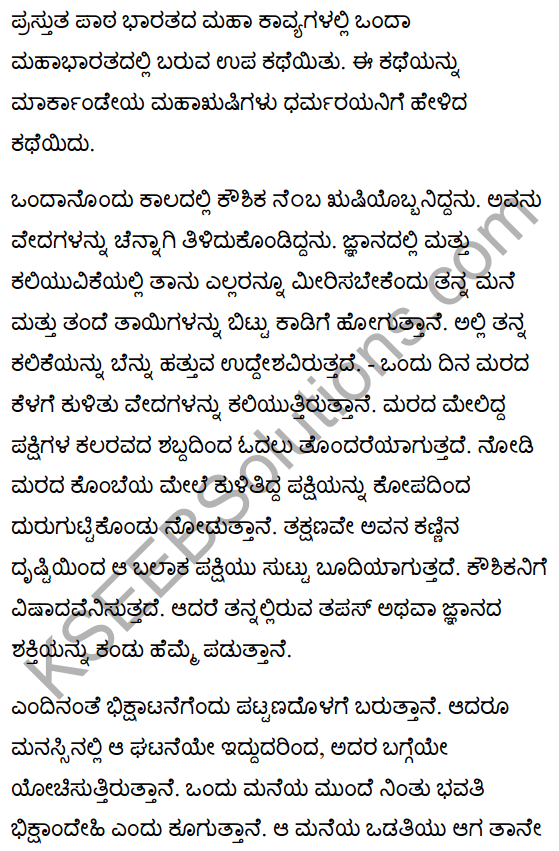 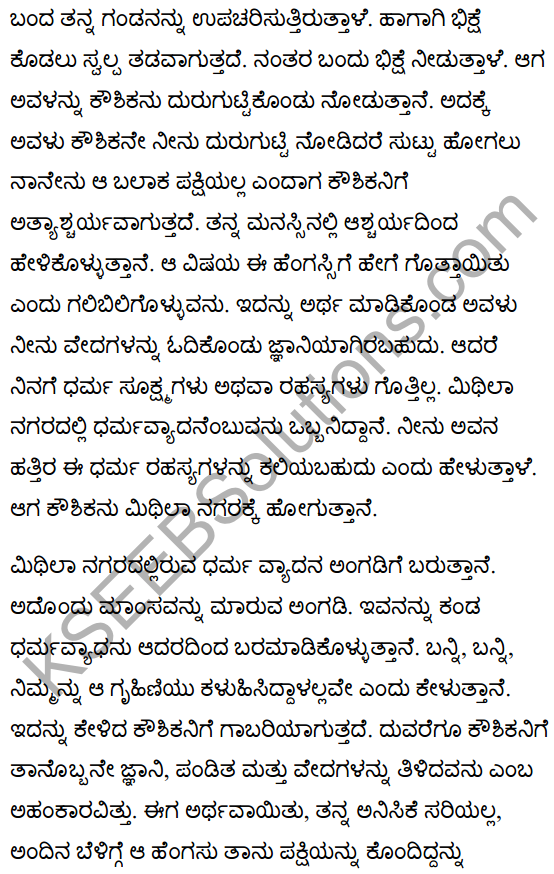 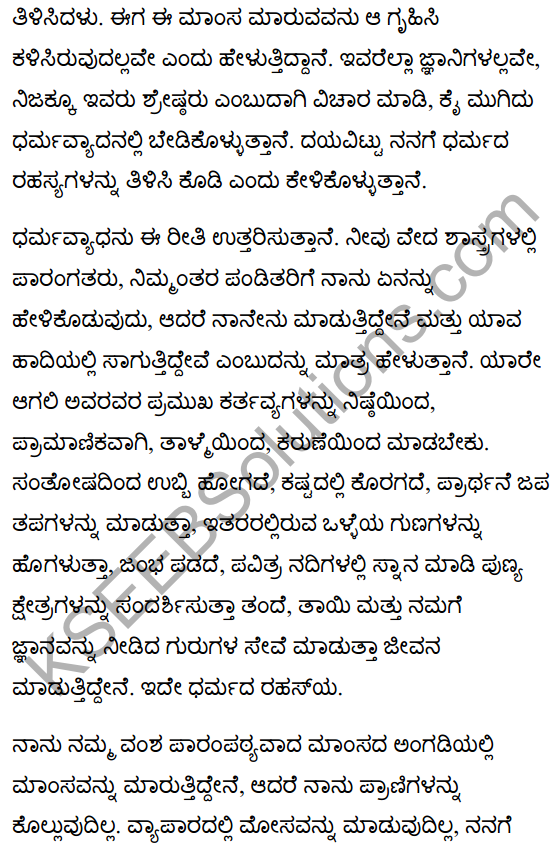 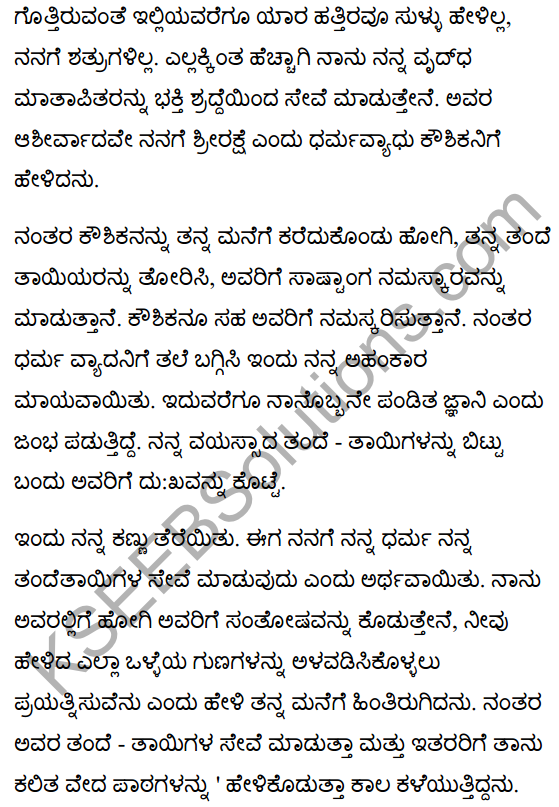 The main aim is to provide quality education for the students of Class 8 English Karnataka State Board Solutions. Class 8 is very important for the students in their career. We hope the information provided in this KSEEB Solutions Class 8 English Chapter 1 The Story of Dharmavyadha Questions and Answers is satisfactory for all. Bookmark our site to get the latest information about the solutions.