With the help of the Karnataka Secondary Education Examination Board Class 8 English Solutions Chapter 4 For a Five Year Old Boy Questions and Answers Pdf, Notes, Summary you can get an idea about the subject. Also we suggest the students keep the textbook aside to learn the subject in depth.

Question 2.
Who do you think is the speaker?
Answer:
The speaker is none other than the poetess (mother)

Question 5.
What does the mother tell the child?
Answer:
The mother tells her child that they should not have the snail-like that. It would be unkind because it might crawl on to the floor and might get crushed under one’s foot.

C2. Read and discuss your responses with your partner. Then write.

Question 1.
Why does the mother say ‘a kind of faith prevails?
Answer:
The mother says ‘a kind of faith prevails’ because she sees that her child’s gentleness is moulded still by words rather than being guided by gentle actions. Even though the mother acted cruelly by, drawing the child’s kittens, trapping nice, and shooting wild birds. The ‘faith’ the mother refers to is that is the belief that character is built by words rather than actions.

Question 2.
How has the mother treated other animals?
Answer:
The mother has trapped mice, shot wild birds, drowned kittens, and betrayed the closest relatives like other people.

Question 3.
Do you observe any difference between the mother’s treatment of the snail and her treatment of other animals and her own relatives?
Answer:
Yes, there is a vast difference between the two. She wants her child to be kind to the snail. She does not want the snail to get crushed under someone’s foot. She behaves well here. But, she had not shown the same kind of concern to other animals. She had killed mice, birds, and kitten without any pity. She had even ill-treated her own relatives. She does not practise what she preaches.

Question 4.
Hoe does the mother console herself? Read the last two lines and comment.
Answer:
The mother wants her child to learn good behaviour and be kind to all creatures. She recalls that she had not been kind to such creatures. In real life, she had seen people behaving in a similar manner. No one is perfect in this regard. They say one thing and do some other thing. The mother consoles herself saying that she and her child are kind to snails, and this mattered more than anything else, as this is the order of the day.

For a Five Year Old Boy Poem Summary in English

The poet illustrates this human behaviour by narrating a fictitious episode in which she imagines her five-year-old child calling out to her after it sees a snail climbing up the window silly after a rainy night. The mother (Poet) goes to the child’s room and explains that it would be unkind to leave it there because it might climb down to the floor. So it is better to take care of it, before someone unknowingly squashes it. She asks the child to pick it up carefully and carry it outside to the garden and leave it there to feed on daffodil flowers.

In the next stanza the poet wonders why such a kind of faith still prevails where people still believe that character is built by mere words of advice, than by actions of others. She feels sad, because the child believed in her words and acted gently with the snail. She feels sad but amazed because the child believed the words of her mother (Poet) who was actually not gentle in her actions. The mother (Poet) had taken her words seriously even though it knew that the mother had drowned the child’s kittens and betrayed even her close relatives. The Poet had also conveyed such harsh truths to others. The harsh truth is that, it is human nature to preach one thing and practice another and that is how things go on in this world.

She strongly believes that being a mother of a child, she is right in advising her child to be good and gentle. And so both the mother and child are kind to little creatures like snails.

For a Five Year Old Boy Poem Summary in Kannada 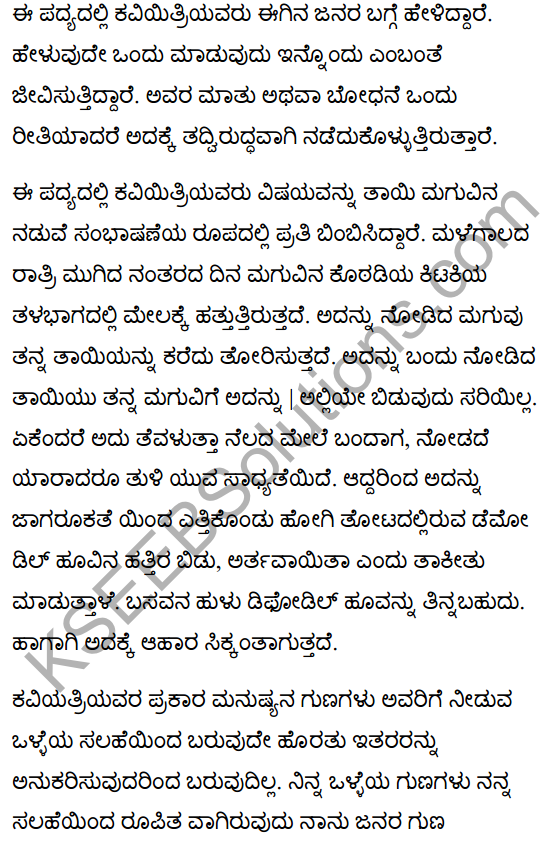 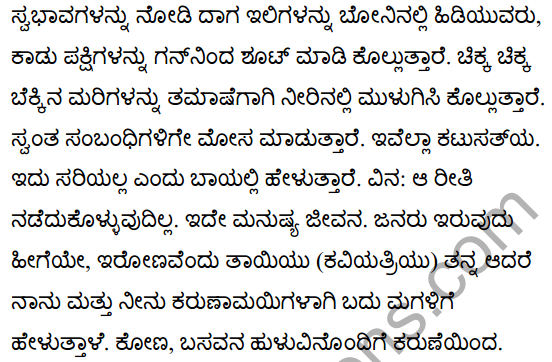 The main aim is to provide quality education for the students of Class 8 English Karnataka State Board Solutions. Class 8 is very important for the students in their career. We hope the information provided in this KSEEB Solutions Class 8 English Chapter 4 For a Five Year Old Boy Questions and Answers is satisfactory for all. Bookmark our site to get the latest information about the solutions.