With the help of the Karnataka Secondary Education Examination Board Class 8 English Solutions Chapter 2 Sir C.V. Raman Questions and Answers Pdf, Notes, Summary you can get an idea about the subject. Also we suggest the students keep the textbook aside to learn the subject in depth.

C1. Answer the following questions and share your repo use with your partner.

C2. Answer the following questions and share your responses with your partner.

Question 3.
How did the Soviet Union honour him?
Answer:
The Soviet Union, in the year 1957, honoured Raman with, the prestigious International Lenin Prize.

C3. Read the following questions. Before writing the answers discuss your responses / ideas with others in the group.

Question 1.
What makes you think that Raman even as boy, had great interest in Science?
Answer:
Raman was very much interested in science from his childhood days. He had made the model of dynamo at his young age. During his school days, he borrowed science books from college students and read them. All these incidents make us to think that Raman, even as a boy, had great interest in science.

Question 2.
Why did Raman’s relatives ask Raman to take up Arts Subjects? How did Raman react to it?
Answer:
When he Joined Presidency College, Madras, for his B.A, his relatives wanted him to give up Science and take history and Economics. [Arts Subjects] But Raman had made up his mind to study science, so he took physics and secured First Rank with number of prizes. After his M.A again his relatives asked him to take up same Arts subjects in Competitive examination in Calcutta. Raman agreed and took the same. He did well with new subjects and got First place in the competitive examination.

Question 4.
Why was Raman not happy with the post of Deputy Accountant General?
Answer:
Raman wanted to become a scientist. That was his life’s ambition. But, circumstances forced him to become Deputy Accountant General. His love for science was so intense that he felt like a fish out of water. Unwillingly he was doing his job. He was waiting for an opportunity to leave the job and become a scientist.

Question 5.
How can you say that Raman had not lost interest in science when he was the Deputy Accountant General.?
Answer:
After becoming Deputy Accountant General, he had contact with scientists and he took interest in science. One day when he saw the banner of science, he got off from the moving train and went to meet the Scientists who had gathered in that building.

When he was in Rangoon, he heard that an institution had bought a piece of modern Scientific apparatus. He hurriedly went to have a look at it. By these two incidents, we can say that he had not lost interest in science.

V1. Fill in the blanks with the words opposite in meaning to the words underlined.

V2. The Pronunciation of the following pairs of words are almost the same but they differ in meaning. Use each word in the pair in meaningful sentences.

V3. Fill in the blanks with suitable phrasal verbs or idioms, choosing from the ones given in brackets.

[makeup, put up with, give up, put on, a fish out of the water, make out, break down]

V4. Make compound words with the words given in Columns ‘A’ and ‘B’ and use the same in meaningful sentences of your own.

V5. Which words/phrases in the text mean more or less the same as the following? Paragraph numbers are in given in brackets.

V6. Give the negative forms of the underlined words using a prefix, like in-, un-, dis-, im.

V7. Fill in the blanks with the noun forms of the underlined words.

Question 4.
Appoint him.
Answer:
Give him an appointment

V8. Fill in the blanks with the appropriate forms of the words given in brackets.

Task 2.
Your teacher will say and write the following wordș. Identify the vowels soiunds in them and write them in the appropriate column.

Situation: 2
(Two friends Raj and Latif meet by chance. Fill in the blanks) :

Raj: Oh, what a surprise You’re Latif aren’t you?
Latif: Yes I am, But how come you’re here?
Raj: Latif, I have come on some official work here
Latif: Ah, you’re a businessman. You have set up a shop here, haven’t you?
Raj: Yes I have. Well, let’s have, coffee shall, we?
Latif: By all means. After that we can talk a lot, can’t we?

Read the map and the information is given carefully. Based on them, say whether the following statements are true or false, Write “T’ for true and ‘F’ for false in the boxes accordingly.

Question 1.
Tamilians are over 50% in the northernmost part of Srilanka.
Answer:
True

Question 2.
In Batticaloa, the Tamilians are less than 50%.
Answer:
False

Question 3.
The east coast of Sri Lanka has more Tamilaians than its west coast.
Answer:
True

Question 4.
More than 50% of the people in Colombo are Tamilians.
Answer:
False

Question 6.
The central part of Srilanka is dense with Tamilians.
Answer:
False

Question 7.
Kandy does not have any sea coast.
Answer:
True

Task 1. Use walk’ or ‘ walks’ in sentences beginning with the following subjects :

Task 2. Match the words. Using the appropriate form of verbs, frame sentences. One example is given.

The Present Continuous or The Present Progressive Form.
Task 3. Look at these pictures. Write what they are doing.

Task 1. Frame appropriate phrases with the words from the table given by below. Also, build by a context/ sentence using the phrase.

Question 4.
Which subjects did Raman study for the competitive examination?
Answer:
Raman studied History and Economics.

Question 8.
Why did Raman admit the candidate who had failed the tests?
Answer:
A candidate came for admission to the Raman Research Institute. He appeared for the entrance test but failed. The office gave him excess traveling allowance by mistake. The candidate came back to the office and returned the excess money paid to him. Raman came to know of this.

He was impressed by the candidate’s honesty and gave him admission. The candidate was surprised to know that he had got a seat in spite of failing in the test. Raman told him that he had admitted him to the institute because of his character. Raman said that he would teach him Physics, as he was not good at Physics.

Four alternatives are given for each of the following questions / incomplete statements. Choose the most appropriate one.

Question 1.
For his work on scattering of light and Raman Effect, C. V. Raman was awarded the
A) Knighthood
B) Nobel Prize
C) Bharatha Ratna
D) International Lenin Prize
Answer:
B) Nobel Prize

Sir C.V. Raman was a great scientist. He won the Nobel prize for his work on the scattering of light and his discovery of the Effect of Light Rays [Raman Effect]. The govt gifted him 25 acres of land to carry out further research work. Raman Institute was the dream child of Sir C.V. Raman.

1. He was born on November 7th, 1888 in Trichy. His parents were Chandrasekhar Iyar and Parvathi Ammal. His father was a professor of Physics at Hindu College, Vishakapatnam. Raman studied there. He was very much interested in science from his boyhood days. He had made the model dynamo in his early childhood. He borrowed science books from college students and read them. He showed great interest in science. He used to fall sick now and then.

2. He got First class in Matriculation examination at the age of 12. He joined Presidency college and his relatives wanted him to give up science and take History and Economics as his special subjects for B.A. But Raman took Physics and secured I Rank and a number of prizes in B.A. He passed M.A. Physics in January 1907.

3. After M.A., he wanted to go to the U.K for higher studies in Science. Because of his health. This was the greatest disappointment in his life. He got the first place in Competitive examinations and was appointed Deputy Accountant General in 1907 at Calcutta. All his relatives felt happy. But Raman felt like a fish out of water in his new post. He still had hopes and waiting for an opportunity to become a Scientist.

4. Even though he was Deputy Accountant General he mixed with scientists and took interest in science. Once he saw a banner of science, he got off the moving train and went to meet the scientists. Once he heard an institution had bought a piece of Modem Scientific apparatus, he hurriedly went to have a look at it.

5. In 1911, he was appointed as Special Accountant General for Posts and Telegraphs in Calcutta. When he was offered the post of Professor at Calcutta University, he jumped at this offer and accepted gladly. After 15 years of service, he became the Director of the Indian Institute of Science in Bangalore. The Raman Research Institute was started in 1948. He be¬came the Director of the Research Institute.

6. He was a great scientist, he would for¬get all about food and rest while he was at work, his wife had often to tell him that his breakfast or coffee was getting cold. He saw the wonderful blue of the Mediterranean Sea, this led him to work on the Laws of Light scattering in liquids and discovered the Raman Effect. For this, he got the Nobel Prize in 1930.

7. Raman was a kind man. When he was working as the Deputy Accountant General, he helped to exchange a burnt 100 Rupee note of a villager to a new one. Once Raman admitted candidate to Raman Research Institute though he failed in the test because of his honesty.

8. Raman got a number of honors and medals. In 1929 he was knighted by King George V and became Sir C.V.Raman. number of Universities honoured him with Doctorates. The government of India awarded him with Bharat Ratna in 1954. The Soviet Union honored him the International Lenin Prize. 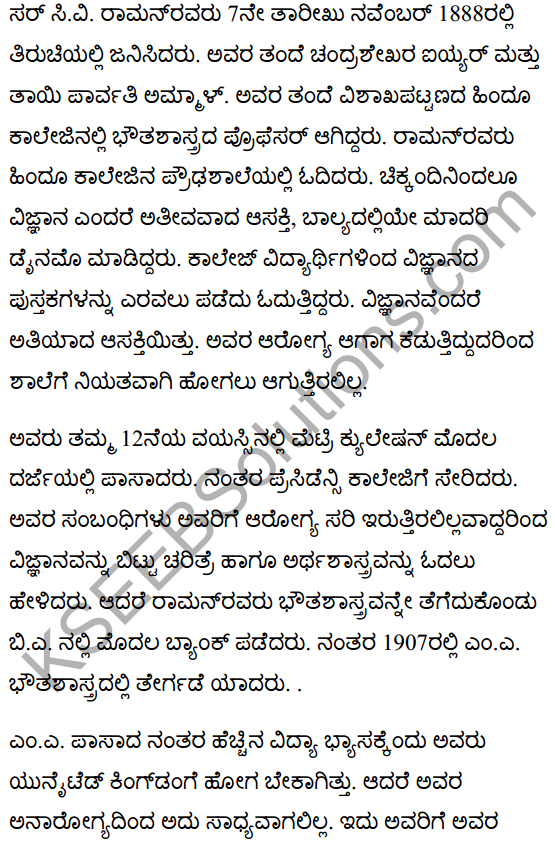 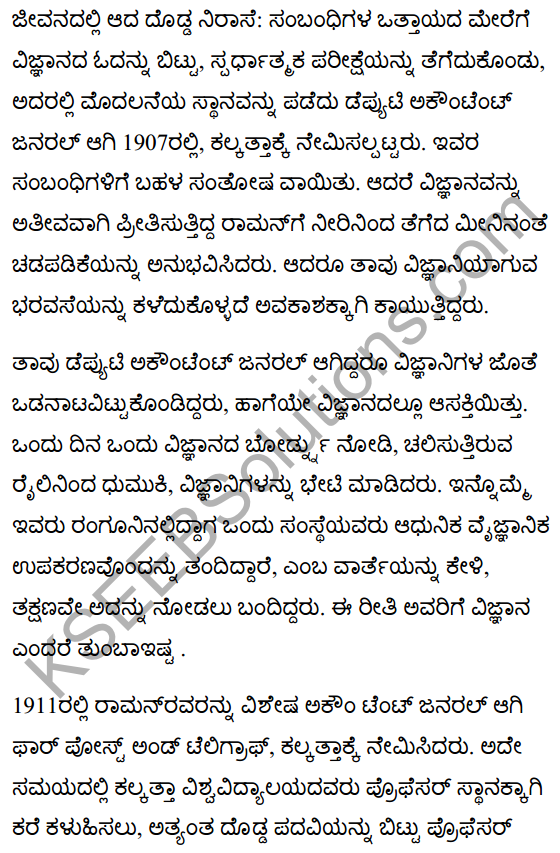 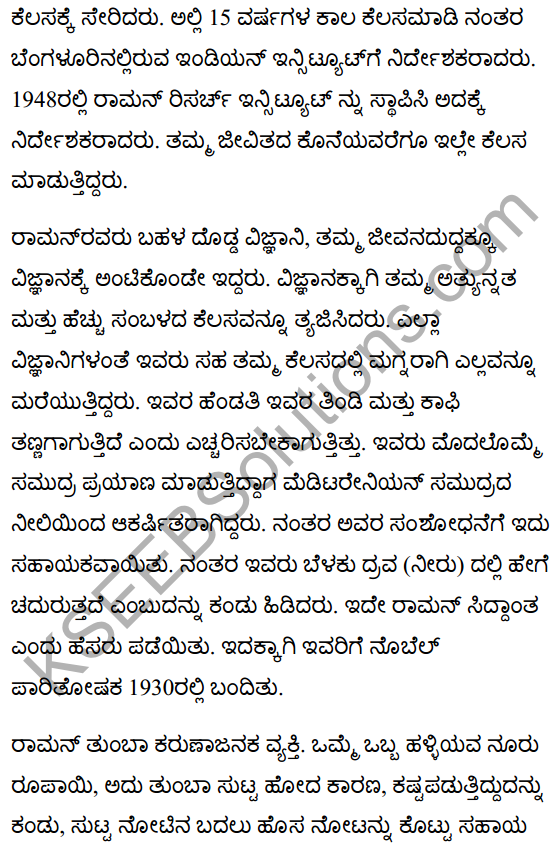 The main aim is to provide quality education for the students of Class 8 English Karnataka State Board Solutions. Class 8 is very important for the students in their career. We hope the information provided in this KSEEB Solutions Class 8 English Chapter 2 Sir C.V. Raman Questions and Answers is satisfactory for all. Bookmark our site to get the latest information about the solutions.