Enhance your subject knowledge through the KSEEB Solutions for Class 7 English A Day’s Wait Questions and Answers lay a stronger foundation of your basics. Verify your answers with the Karnataka State Board Class 7 English Chapter 3 A Day’s Wait with Answers provided and know where you went wrong.

I. Answer these questions:

Question 1.
How old was Schatz? What disease was he suffering from?
Answer:
Schatz was nine years old. He was suffering from fever.

Question 2.
What is the relationship of the author with Schatz? Which line gives you that information?
Answer:
After a while he said to me, ‘You don’t have to stay in here with me, papa, if it bothers you gives us the information that the author and the boy Schatz are father and son.

Question 3.
How many capsules did the doctor prescribe? State the purpose of each one?
Answer:
Doctor gave three capsules, one was to bring down the fever, another a purgative, the third to overcome an acid condition.

Question 4.
How does the author describe nature?
Answer:
The day was bright and cold. The ground covered with sleet that had frozen. The hare trees, the bushes, the cut brush and all the grass and bare ground looked as if it had been varnished with ice. The ground was glassy and slippery. There was a covey of quail under a high clay bank. Some covey lit in trees. There was a frozen creek also.

Question 6.
Why did the writer go out of the house? What did he hunt?
Answer:
Writer was a little puzzled by the son’s behaviour as he was trying to get him out of his room. So the writer thought his son is light-headed due to the temperature, went out for a walk. He hunted only two birds.

Question 7.
What happened at the house in the absence of the writer?
Answer:
In the absence of a writer, the father found his son exactly in the same position as he had left him. His face was white but the tops of his cheeks flushed by the fever, and he never allowed anyone in the house to enter the room as he did not want them to get what he had.

Question 8.
What caused Schatz to panic?
Answer:
The doctor had said that Schatz had a temp of 102°. In his school in France, the boys had said that no one could live with a temperature of 44°. He thought that his temperature was much higher so he was surely going to die so he was in a panic.

His temperature is 102 and it is very much safe. He gave an example of miles and kms. How many kilometers we make when we do seventy miles in the car. This clarification made Schatz think that there is nothing wrong with him and he was not going to die.

Question 10.
What was the effect of the clarification of Schatz? Which lines tell us about the effect?
Answer:
The father’s clarification made Schatz himself free from the fear of death. His gaze at the foot of the bed relaxed slowly. The holdover himself also relaxed. The next day he started crying early at little things that were of no importance.

The father spoke like this – It is like miles and kilometers. You aren’t going to die. That’s a different thermometer on that thermometer thirty- seven is normal. On this kind, it’s ninety – eight. The above lines made a great effect on Schatz.

Question 11.
Are these statements true or false:
a. Schatz was suffering from Pneumonia.
b. Schatz liked his father reading to him
c. The father shot down a fox when he was hunting.
d. The cat in the house accompanied his father when he went out hunting.
e. The normal temperature of the human body is 100 Degrees centigrade.
Answers:
a-false, b-false, c-false, d-false, e-true.

Question 2.
Why didn’t the boy allow anyone into his room?
Answer:
The boy didn’t allow anybody because he thought he was affected by some dangerous disease. If anyone comes in contact with him he was afraid even they may get it and they will die and he wanted them to be safe.

Question 3.
Why do you think the boy liked to stay awake instead of going to sleep?
Answer:
Quite possibly, he was waiting for the hour to come when he would die, since he had the notion that with 102 degrees temperature he would not survive.

Question 4.
What was the boy waiting for? How did the wait end?
Answer:
The boy was waiting all day to die In France the boys had told him that if a patient had 44 degrees, he was sure to die. He heard the doctor say that he had 102, which was more than twice 44 he was sure to die, father laughed and explained, in France, they had a different kind of thermometer in which 37° is normal, but in our country 98 is normal So his temperature was just a little above normal. The boy relaxed immediately and the long wait ended.

A Day’s Wait by Ernest Hemingway About the Author:

Ernest Hemingway, the son of a doctor, was born in Illinois, USA. He began his literary career as a war correspondent during world war I -and went on to become a highly successful writer of prose fiction, both novels, and short stories. His best-known novels are ‘A farewell to Arms’ ‘For whom the bell tolls’ and ‘The old man and the sea’ for which he won the Pulitzer prize in 1953. Hemingway influenced a whole generation of writers by his distinctive narrative techniques, his depiction of human conflicts, and his economy of style. His themes include war, sports, hunting, violence, and married life. He was awarded the Nobel prize for literature in 1954 for his contribution to literature. Hemingway died in 1965.

A Day’s Wait Summary in English

The story opens as a father discovers that his 9-year-old boy, Schatz has a fever. The father sends for the doctor and he diagnoses a mild case of influenza. The doctor says that the temperature is 102° and also prescribes three kinds of medicines and said the boy will be well if they avoid pneumonia and the fever did not go above 104°.

When a father gives Schatz his medication, Schatz asks if he thinks the medication will help and the father answers affirmatively. After attempting to interest Schatz in the pirate book and foiling the father stopped reading. Then Schatz ask his father when the father thinks Schatz will die. From this father came to know that Schatz had heard at school in France that no one can live with a temperature above 44, so Schatz thinks he is sure to die with a temperature of 102. He has been waiting to die all day.

After the father explains the difference between Fahrenheit and Celsius, Schatz relaxes, letting go of his iron self-control, and the next day he allows himself to get upset over little things.

A Day’s Wait Summary In Kannada 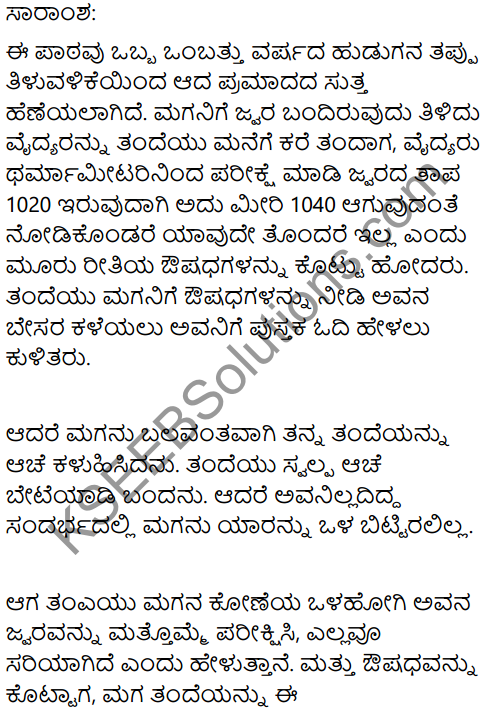 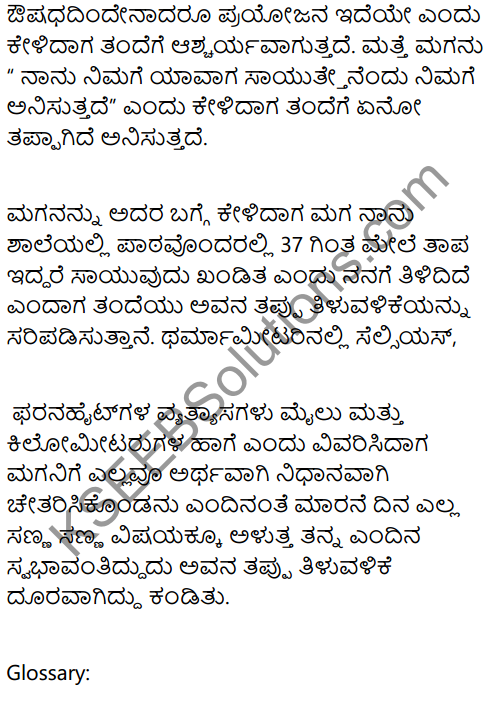 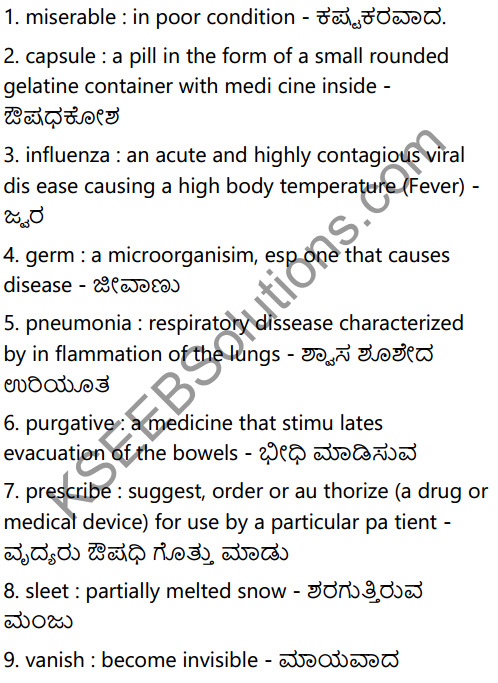 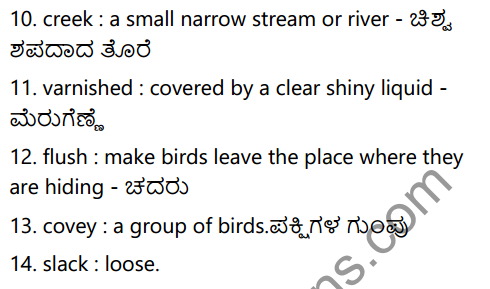 The above furnished information regarding KSEEB Solutions for Class 7 English Chapter 3 A Day’s Wait Questions and Answers is true as far as our knowledge is concerned. If you have any doubts feel free to reach us via the comment section and we will reach you at the soonest possible.