The Convergence of the Twain Questions and Answers, Summary, Notes

I. Take turns with your partner to ask or answer the questions given below. Explain to him. or her why you think your answer is correct Quote from the poem if necessary. Write down your answers.

Question 2.
The poet uses the word “grew” twice, What does he mean in each case?
Answer:
Poet uses the word grew twice. Once he tells about the man-made ship, how it grew into a greater height and the quality of ship has also grown, whereas in second case, poet warns as and when science goes on growing nature also grows as big as the science and technology.

Question 3.
What does he say about the ship’s qualities?
Answer:
He says that the ship has grown into a greater height and also the quality rendered being beautiful to look at, and also the degree of brightness in colour is also grown.

Question 4.
What is mysterious and fearful? What phrase expresses this idea?
Answer:
The phrase “ shadowy silent distance grew the iceberg too”. This means that while the ship was being built, God was making the iceberg that the ship crashed into, which feels something fearful and mysterious. It also symbolizes that nobody can escape nature’s will taking its course.

Question 5.
In what way are the ship and the iceberg “alien”?
Answer:
Here, in the poem, ‘alien’ means the ship and iceberg are opposite to one another, One is natural and the other is man-made. As human technology goes on growing, on the other side nature also goes on growing against the human-technology which goes against nature.

Question 6.
When you are playing with a top, you spin it and make it spin on the floor. The force of spinning also makes it go round and round in a circle. Now, our earth also does the same. It goes round and round the sun, spinning. So, who is “The Spinner of the years”?
a. the earth?
b. the sun?
c. the almighty?
d. fate?
Answer:
d. the fate

Question 7.
Two things became historical facts in navigation. What were they?
Answer:
Two things which became historical are one of the largest, safest manmade conventions of its time, and Hardy presents a philosophical poem about fete’s inevitability and indifference through the eyes of nature, portraying the disaster by presenting the accident. The Titanic was supposed to be unsinkable because of the technology used to build it. But fate proved otherwise Man’s technology is no match against the forces of nature.

Question 8.
The Atlantic Ocean is vast. The titanic and the iceberg are mere splash in it. Yet, one obstructs the other in its course. There was a head-on collision. This was an amazing event. (Supply the missing words)

Question 9.
The iceberg and the ship were alien. They were like the two hemispheres. Explain what this means.
Answer:
The iceberg and the ship were alien. Here it means they are different from one another one is natural and the other one is artificial, man-made, as to be the opposite of one another. They were like two hemispheres, this sentence gives the idea that human pride was shattered when the ship sank.

The two hemispheres would refer to either side of the world. The two sides are purposefully created by the mysterious creator and they have ever since been coming close to their ultimate clash. They are twin halves of one august event. They will be two halves of the tragedy.

Question 10.
The event that brought death and destruction was like play to someone. Which two lines say so?
Answer:
‘Till the spinner of the years. Said “Now!” and each one hears.

Question 11.
Consider the Words “ _____ And each one hears _____ ” This means there were two / three/ many who heard, (underline the correct word)
Answer:
Two, titanic and iceberg.

Question 13.
In describing the collision the poet has used three phrases and one word. Scan the poem and find them.
Answer:
The three phrases are “In shadowy silent distance grew the iceberg too” The intimate welding of their later history. On being anon twain halves of one August event The word ‘consummation’ All these describe the collision.

The Convergence of the Twain by Thomas Hardy About the Author:

Thomas Hardy was an English novelist and poet. A Victorian realist in the tradition of George Eliot, he was influenced both in his novels and in his poetry by romanticism. Like Dickens, he was highly critical of much in Victorian society, though Hardy focused more on declining rural society. While Hardy wrote poetry throughout his life and regarded himself primarily as a poet, his first collection was not published until 1898.

Thomas Hardy was born in 1840 in Higher Bockhampton, a hamlet in the parish of Stinsford, where his father Thomas worked as a stonemason and local builder. Hardy’s family lacked the means of university education. His formal education ended at the age of 16 when he became apprenticed to James Hicke, a local architect. He remained preoccupied with his first wife’s death and tried to overcome his remorse by writing poetry. In 1910, Hardy had been awarded the Order of merit.

The Convergence of the Twain Summary in English

Thomas Hardy discusses the cause of the disaster, the collision of the ship, and the iceberg. The pairing of human technology and nature can be seen quite clearly in the poem with all the new technologies of humans set against the bigger force of nature. Poet is his first stanza tells that while the titanic was being built, nature too prepared against it. Creating a sense of menace in the lines ‘shadowy silent distance grew the iceberg too’.

The unspoken force was a predestined and unavoidable event premeditated by some hidden uncontrollable force. Though they both are opposite to one another they grew simultaneously they are coming closer to join, but no one could predict future happenings.

Both the Titanic and the iceberg grew without anyone ever knowing that they were signs of being purposefully created by the creator they are coming close by the paths in coincidence. They were being the two halves of the tragedy of one adjust event craving great importance and especially of the highest social class who is unsympathetic to nature In the last stanza, fate is personified ‘spinner of the years’ which suggests that some force planned this purposefully, the fate decides ‘Now’ which is the time for collision, nothing can change it.

“Consummation comes and joins two hemispheres” gives the idea that human pride was shattered when the ship sank. The two hemispheres refer to either side of the world, the word ‘Jars’ could be the news filtering through and the families being devastated and also human pride being jarred because of those proud to see the ship leave and those waiting for it to arrive anxiously. Unfortunately, fate takes its own decision which is different from people’s expectations.

The Convergence of the Twain Summary in Kannada 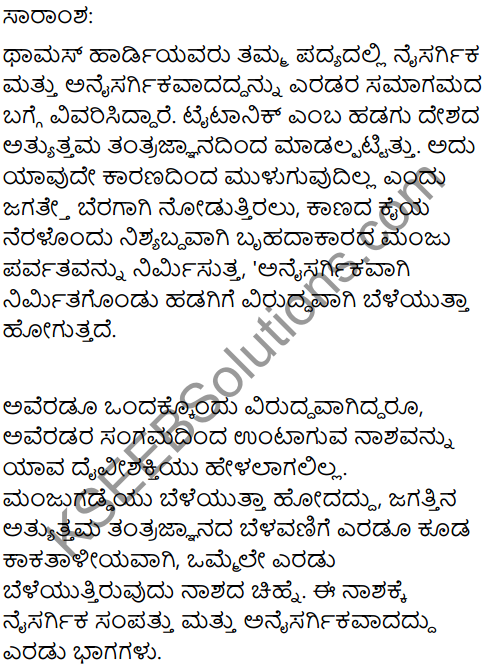 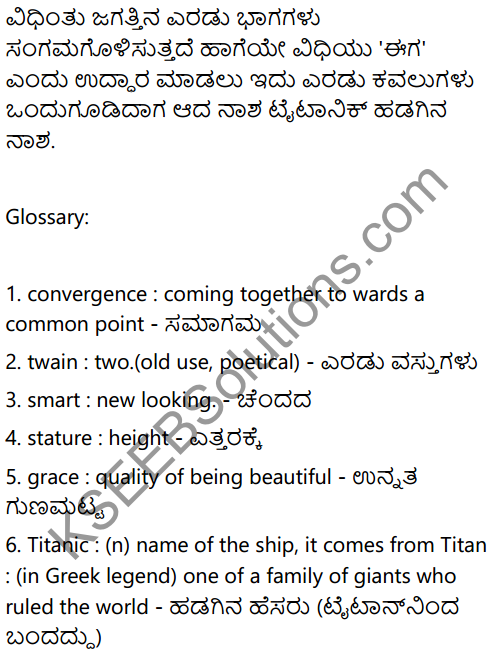 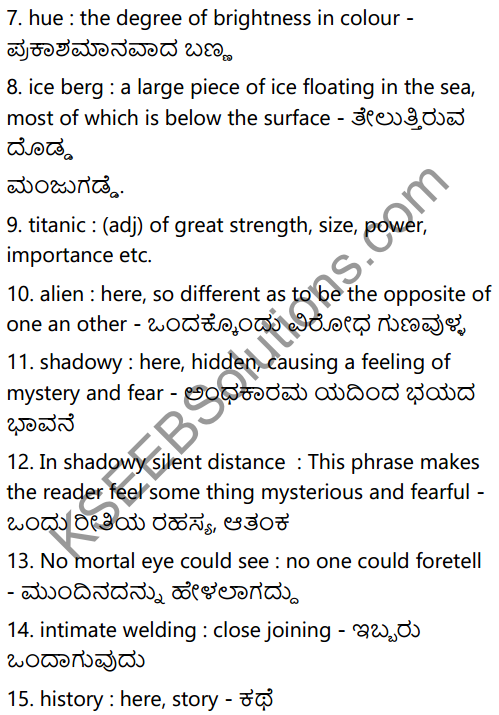 The above furnished information regarding KSEEB Solutions for Class 7 English Chapter 8 The Convergence of the Twain Questions and Answers is true as far as our knowledge is concerned. If you have any doubts feel free to reach us via the comment section and we will reach you at the soonest possible.