The Road not taken Questions and Answers, Summary, Notes

I. Work with your partner. Take turns to ask or answer these questions. Explain to him or her why you think your answer is correct. Quote from the poem if necessary. Write down your answers.

Question 1.
Two words catch your eye in the first line. They bring before you a beautiful picture. What words are they?
Answer:
Two words catches our eyes are two roads diverge and yellow wood. The poet stands in a place where the road he is travelling divides into two, as he stands at cross roads in his life. It is the autumn season as the leaves on the trees have turned yellow gives us a beautiful picture.

Question 2.
Where and when does a forest turn golden yellow?
Answer:
In the forest, during autumn season leaves turn from green to yellow which is a spectacularly beautiful season.

Question 3.
The poet stood for long at a point where two roads forked.
Answer:
True. And be one traveller, long I stood.

Question 4.
“I could not travel both And be one traveller”, Says the poet. What does he mean by this? What word expresses his regret about this?
Answer:
Poet regrets saying that he could not travel on both the roads and spend his whole life as a traveller He knows that one must have a destination in life and to this end, one must make choices. The word ‘sorry’ shows the poet’s regret.

Question 5.
In life, sometimes, you are given two choices. But you are to make only one choice. You cannot have both things. Can you give an example of this? Try.
Answer:
At a certain point in life, we will start working at that stage of life we will not be to give to time to maybe other sectors or parts of life such as family friends, and other personal things so when you are earning you can by default not give time to all other things.

Question 6.
Complete this English proverb. “You cannot have your cake and eat it too!”
Answer:
There were two roads feeing the poet and he had to make a choice He stood at the fork for a long time trying to decide. He looked down one road as far as he could see till a point where it bent and he could use no further. Then he decided to take another road.

Question 7.
So, what did the poet do? (See stanza 1. Refer to your answer to question 4)
Answer:
Poet regrets saying that he could not travel on both the roads and spend his whole life as a traveller He knows that one must have a destination in life and to this end, one must make choices. The word ‘sorry’ shows the poet’s regret. The Poet took the road less traveled.

Question 9.
What, had worn the other road more or less the same?
Answer:
On a particular morning on which he was travelling no one had trodden on either of the two because the leaves that lay on the roads had not become black from the tread of anyone’s footsteps. The Passing there had worn them really about the same.

Question 10.
Once the second road looked to him more attractive. Then both roads looked equally attractive. Explain this ‘ in your own words.
Answer:
Traveller found it difficult to make a choice because both the roads appeared attractive to him. On a deeper level both the choices in his life would give him what he wanted from life-may be different things on different paths so he had considered what things he wanted more and choose accordingly.

Question 11.
The poet expresses a wish and a doubt, in these two sentences. Complete these sentences
Answer:
I will come back to travel on another road. But doubt if I should ever come back.

Question 12.
According to the poet, one should always take the road travelled by others before Explain this in your own words.
Answer:
Not True.
All human beings are, at some time or other, dissatisfied with the choices we have made. We keep thinking about how things would have been different had we made another choice. In the same way, a poet in the future feels his life would have been easier, he would have been more comfortable, richer, or happier had he chosen the other road.

1. Read this dialogue and supply the missing words

Rhyming Words:
The lines of this poem ends with “rhyming words” in the pattern a – b – a – a – b. Find the rhyming words and read them out to your partner.

The Road not taken Additional Questions

Question 1.
Do you think traveller is satisfied with his choice?
Answer:
No, the traveller is not satisfied. He says that in the future he will be telling how he. choose the less travelled road. With a sense of sorrow. He would tell how he took the less frequented road and that made all the difference in his life.

Question 2.
What was the desire of the traveller? Why could it not be fulfilled?
Answer:
The traveller would have liked to travel on both the roads but he had to choose one. He thought that he would keep the other road for another day and would come back to it. However, he knew it was impossible because one road leads to another in life until it is impos¬sible to turn back.

Question 3.
What impression do you form on the traveller?
Answer:
We learn that traveller is not an impulsive man. He reflects a great deal before he makes a choice. We also learn that he is independent and that he prefers the road fewer people have travelled by, even though he may have to face greater difficulties while travelling along with it.

Question 4.
Who is the narrator here? Where did he stand?
Answer:
The poet himself is the narrator and so the poem is autobiographical in nature. He stands at the crossroads in his life, a place where the road he is travelling divides into two. He is standing at the fork in the road.

Question 2.
Poet found it ____ to make choice.
a) easy
b) difficult
c) by following others
d) None.
Answer:
b) difficult

Question 3.
Poet is a kind of man who takes up _____
decisions
a) by following the crowd
b) independently
c) staying in confusion to make a choice
Answer:
b) independently

Question 5.
Poet wanted to travel on _____ roads.
a) both
b) single
c) less travelled
d) more travelled
Answer:
a) both

The Road not taken by Robert Frost About the Author:

Undisputedly the best-loved American poet, Robert Frost was born in San Fransisco on 26th March 1874. He studied as a farmer for eleven years at Derry, inNew Hemisphere. He migrated to England in 1912 where he met Rupert Brooke, Ezra Pound, Edward Thomas, and many other distinguished poets. It was in England that his first volume of poetry, ‘A boy’s will’ was published. He returned to the United States in 1915.

The American editors of the north of Boston’ established him as a poet. He was awarded the Pulitzer Prize for poetry four times, the medal of the American Academy of Art and letters in 1938, and the poetry society of America in 1941. His works include ‘A boy’s will, ‘North of Boston’, ‘Mountain interval’ ‘New hemisphere’, West-running Brook, Complete poems, etc. He died on 29 Jan. 1963.

The Road not taken Summary in English 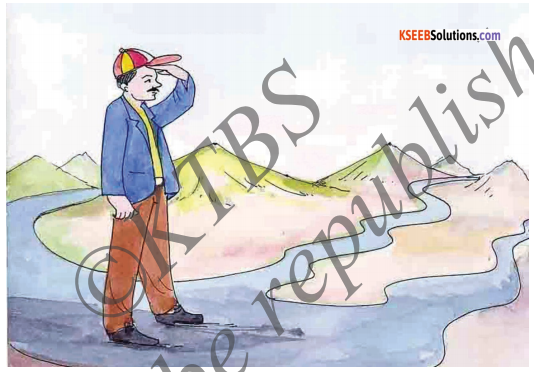 The poem is written in response to the indecisiveness of the poet. On a deeper level it is about the choices one makes in life and the dilemma one faces in making these choices.

The poet, travelling alone one day, reaches a place where the road divides into two. He had to decide about which road to choose because both seen equally good. He stands there for a long time trying to decide. Both the roads have not been travelled on that day because both are covered with leaves After contemplating for a long time, he decides to take the road not trodden by anyone’s footsteps.

After choosing the road that appears to be less travelled. He decides to leave the other road for another day even though he knows that once a choice has been made one travels farther and farther along the chosen road until it is impossible to come back.

The poet says that after ages he will be telling his story of how he chose the road less travelled and that had made all the difference in his life. He feels sorrow because he will have regrets that he did not choose the other road. It is human nature to constantly wonder whether the other path would have given more fame, happiness, and money. What the poet is saying is that it is difficult to make a decision and then, after making a choice, the alternative seems to be as good, if not better than the chosen one

The Road not taken Summary in Kannada 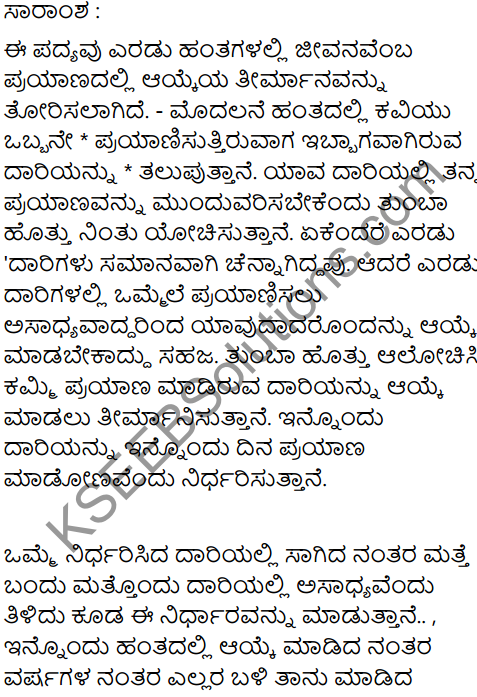 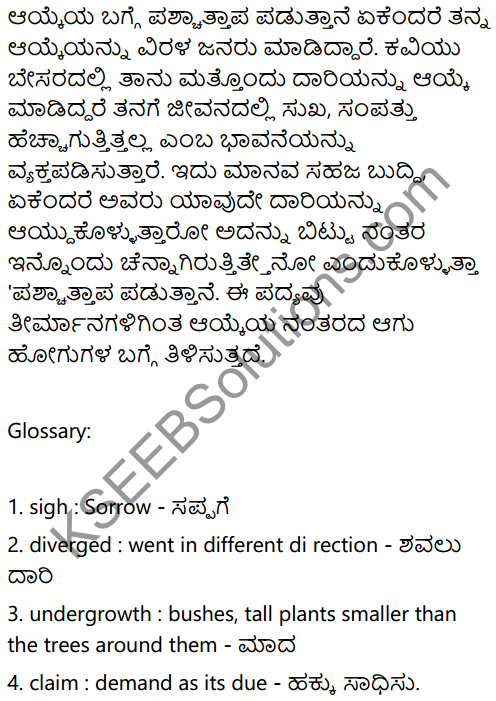 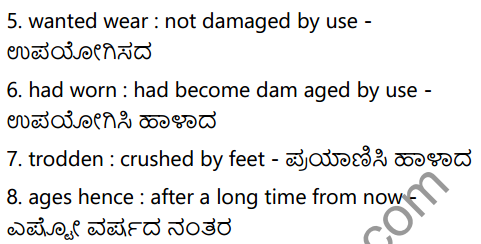 The above furnished information regarding KSEEB Solutions for Class 7 English Chapter 6 The Road not taken Questions and Answers is true as far as our knowledge is concerned. If you have any doubts feel free to reach us via the comment section and we will reach you at the soonest possible.