I. Take turns with your partner to ask or answer these questions. Explain to him/her why you think your answer is correct. Quote from the poem if necessary. Write down your answers.

Question 1.
Wordsworth saw a group of reapers at work.
Answer:
Not true

Question 2.
In this poem the poet speaks to his companion / to himself. (underline the correct answer)
Answer:
To himself

Question 3.
The poet saw some bundles of grain in the field.
Answer:
True.

Question 4.
The reaper’s voice was resonant and sonorous.
Answer:
Not true.

Question 5.
The reaper’s song was joyous. (True / Not True) scan the poem and find three adjectives to support your answer
Answer:
Not true.
adjectives: Old, unhappy sorrow, loss or pain

Question 6.
What welcomes travellers in the deserts of Arbia?
Answer:
The sweet notes of the nightingale in a lonely desert seemed to welcome the tired travelers in an oasis in an Arabian desert.

Question 7.
Where do birds sing in deserts?
Answer:
Obviously birds are not found in deserts, but when the tired travellers reach any oasis these the birds are found singing.

Question 8.
Can you imagine the “silence of the seas”? Explain this beautiful expression to your partner.
Answer:
The silence of the seas means a sea that is really calm and peaceful with only calm waves moving, and there are no ships and boats moving about. The sea is poetically ‘silent’ because no storms, gales are blowing to disturb the peace of the sea.

Question 10.
There are five words in the poem that are related to music, scan the poem and find them.
Answer:
The five Words are resonant, sonorous, chant, notes, plaintive, theme, numbers, strain.

Question 12.
What was the effect of the song on the poet?
Answer:
In this poem, Wordsworth said that he was able to look at nature and hear human music. He writes about real human music encountered in a believed, rustic setting. What he appreciates is its tone, its expressive beauty, and the mood it creates within him, rather than its explicit content, at which he can only guess.

But what it really does is praise the beauty of music and its fluid expressive beauty, the spontaneous overflow of powerful feeling that Wordsworth identified at the heart of poetry.

The Solitary Reaper by William Wordsworth About the Author:

William Wordsworth born in his beloved lake district was the sop of an attorney. He went to school first at Pensith and then at Hawkshead grammar school before studying from 1787 at St.John’s College, Cambridge.

Today Wordsworth’s poetry remains widely read. Its almost universal appeal is perhaps best explained by Wordsworth’s own words on the role, for him of poetry, what he called “the most philosophical of all writing” whose object is truth carried alive into the heart by passion.

Wordsworth spent the winter of 1798 99 with his sister and Coleridge in Germany, where he wrote several poems including the enigmatic ‘Lucy’poems. Wordsworth’s second verse collection ‘In two volumes’ appeared in 1807. In 1843 he succeeded Robert Southey (1774 – 1843) as England’s poet laureate. Wordsworth died on April 23, 1850.

The Solitary Reaper Summary in English 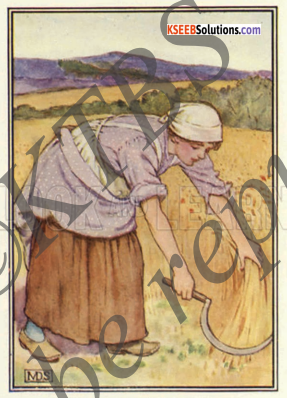 In this poem the poet tells us the story of a lovely highland girl, who is working in a field and singing a song. He is deeply impressed by her song and remembers the melody of her song even after he has left the place. He cannot understand the language of the song but the sad beauty of her voice goes straight to his heart. The atmosphere of the poem and the song of the girl as a part of the beauty of nature leave a lasting impression on the mind of the poet.

Poet in the first paragraph advices the passerby to stop short and listen to her. The highland girl cuts and binds the grain in sheaves, singing a sad song as well as busy in her work. Poet compares the voice of a reaping girl to a nightingale. In addition, he also says even a nightingale cannot sing as sweet as her. When some group of tired travellers reaches, Arabian deserts the song of the girl welcomes them.

The voice of the cuckoo is very sweet which sings in spring seas but the voice of the girl is rather sweeter than the cuckoo because her voice broke the silence of the seas. Poet guesses the girl is singing a unhappy simple song of ordinary matter, whatever may be the theme poet wants the song, not come to an end. Finally, the poet being a poet of nature was profoundly impressed and remembered the song for its melodious effect.

The Solitary Reaper Summary in Kannada 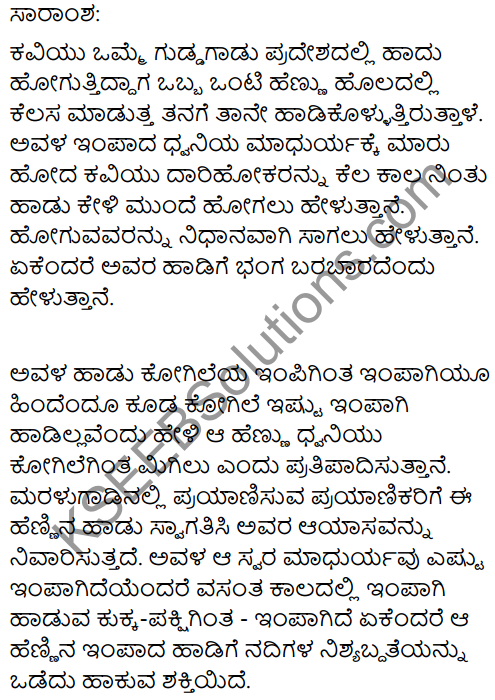 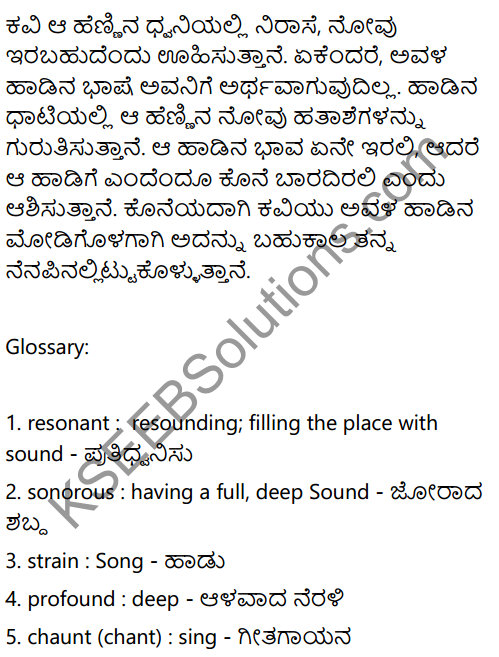 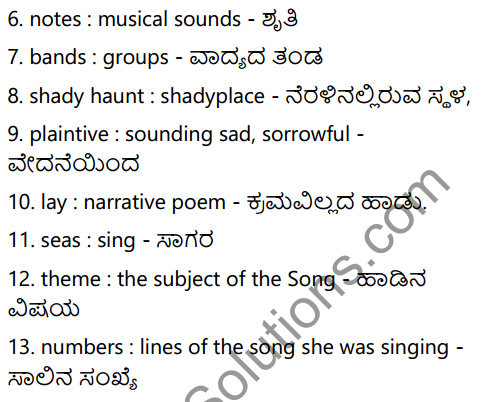 The above furnished information regarding KSEEB Solutions for Class 7 English Chapter 5 The Solitary Reaper Questions and Answers is true as far as our knowledge is concerned. If you have any doubts feel free to reach us via the comment section and we will reach you at the soonest possible.