1. This is an interesting story. Did you enjoy reading it? Now you have to tell your partner about some interesting points you must have noted:

Question a.
At the beginning, the story tells us that two people – a man and a girl – have become friends (true / not true)
Answer:
True

Question b.
The man’s name is Bond. The girl’s name is
Answer:
Usha

Question c.
The man is a writer. The girl is a ……… girl.
Answer:
school

Question e.
The man and the girl share a common interest. They both keep looking for new ………..
Answer:
species

Question f.
They are both attracted by
i. a new flower.
ii. the goats that they meet.
iii. the rain clouds in the Himalayas.
iv. the cold winds that hum and whistle through the pines.
Answer:
i. a new flower

Question h.
We call this day Yugadi. What do people in Himachal Pradesh call it?
Answer:
Basant Panchami

Question i.
The girl predicts a heavy rain on that day (true/ not true)
Answer:
True

Question j.
The man teaches the girl how a plant seeds, (true / not true)
Answer:
Not true

Question k.
Who saved the plant from the goats? How?
Answer:
Usha advanced on the goat shouting with an open blue umbrella and drives them away

Question l.
The girl knows the goat language because
Answer:
She had her own goats at home

Question n.
The two friends could not say that the new flower was their discovery because
Answer:
they did not know its botanical name

Question o.
The author had wondered what its name could be. But the villagers had given it the name ………..
Answer:
Basant

Question p.
What Latin name is given for an other flower in the story? (Botony gives Latin names for trees, plants, flowers and fruits.)
Answer:
Nasturtiums

The New Flower Summary in English

The lesson ‘The New Flower’ is the writer Ruskin Bond’s life experience. It is about the writer and a little girl named Usha. While roaming the hills of Mussorie they both dis cover ‘A new flower’ that both could not recognise.

The writer says that one of the most delightful experiences of walking in the hills, is coming across an unusual and little know flower. The writer had been roaming aobut the hills of Mussorie. It was Ugadi (first day of Hindu Calender) and he feels that it still mid – winter on the Himalayas.

He wsa climbing up the steep road to his cottage. A nine year old little girl named, Usha was returning from school, She hurries past him up the hill. When the writer joins her up hill, she points to a flower blooming along their path and says that it was a ‘new flower’.

The flower, was butter – yellow- blos som and stood out like a bright star against the drab winter grass. The author had no idea what its name might be. when usha insists that she will pluck the flower for him he refuses her saying that it maybe the only one growing there and if they leave it there it may bear some seeds.

That night it rained, the next day the writer walked up the road expecting to see the flower again but it had disappeared in the storm. But two other flowers had bloossomed. They looked as though two tiny stars had fallen to earth at night.

The following day the writer showed Usha the fresh blossoms. Two days latei the writer saw saw goats grazing near by. He was afraid that the goal may eat the flow ers and tried to shoo them away. When a goat gave him a baleful look he backed away.

He recalled an incident where one o f his grandfathers goats had pushed a visiting official into a bed of Nasturtiums. Usha comes to his rescue and drives away the goats with her pretty blue umberella. The flowers were saved.

As summer advanced, the flowers disappeared and the writer forgot all about them. Soon winter returned with cold winds blowing from all directions.

One day the writer heard Usha calling him from the hillside. He saw her standing behind a little cluster of the golden star – shaped flowers. She was enchanted by the sight because she helped save them from the goats. Now there were several of such flow ers all over the hill – side.

The author confesses that he does not know their name. But Usha tells him she had always seen them growing in her village on the next mountain and people call it ‘Basant’ whichmeant ‘Spring’.

The writer is disappointed to realise that they were, after all, not. the discoverers of a new species. But their disillusionment was outweighted by their pleasure. The flowers had flourised in adversity. The writer wishes that they may thrive and multiply.

The New Flower Summary in Kannada 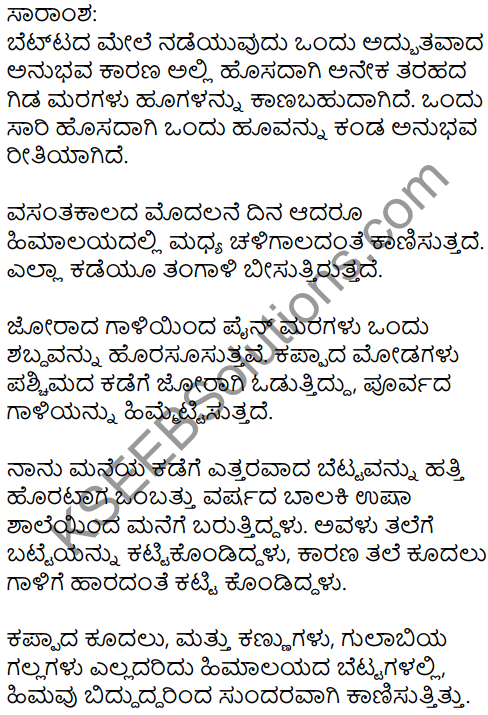 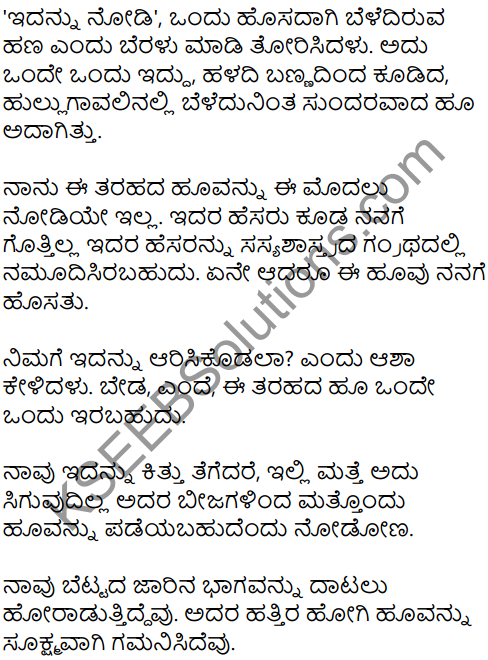 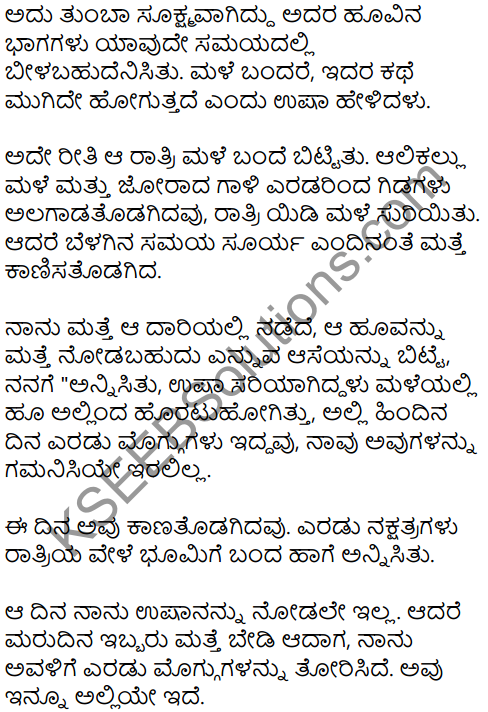 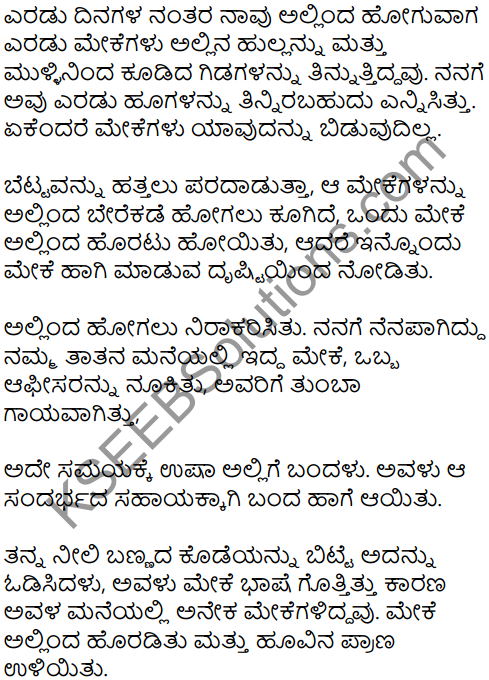 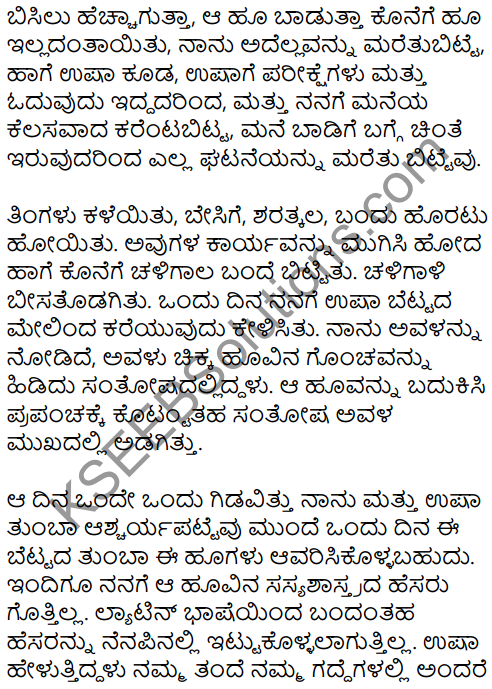 Scramble: More Away Quickly
Rattle: Rapid Knowing Sound
Swish: A Soft Rushing Sound or Movement
Partial: In Favour of One side In A Dispute.
Steep: Rising Or Falling Sharply
Shoo: An Exclamation Used To Drive Away An Animal.
Baleful: Threatening Retreat – Withdraw From An Attack on Enemy Forces
Flourish: Develop Vigorously
Adversity: Unpleasant Situation
Species: A Group of Similar organisims, Individuals, animals or Birds.

Hope the information shared regarding KSEEB Solutions for Class 6 English Chapter 1 The New Flower Questions and Answers is true and genuine as far as our knowledge is concerned. If you feel any information is missing do react us and we will look into it and add it accordingly.