Answer the questions your teacher will ask you.

Question b.
What is astronomy?
Answer:
Astronomy is the science of stars, planets and the universe.

Question d.
What is a planetarium? There is one in Karnataka. Where is it?
Answer:
A Planetarium is a building in which images of stars, planets, and constellations are projected on to a domed ceiling. Yes, there is a Planetarium in Bangalore. The Jawaharlal Nehru Planetarium.

Question e.
What instrument do astronomers use?
Answer:
Telescope.

Come, let us talk about this story.

1. Some sentences given below are NOT TRUE. Correct them and write them down, Discuss the points with your partner.

2. Talk to your partner about the points raised in these questions and then write down what you said.

Question c.
What is Lippershey’s contribution to astronomy?
Answer:
Lippershey invented the telescope, the instrument with which astronomers watch the skies. The telescope makes distant objects appear to be near and magnified several times over.

Question d.
What is the Milky Way?
Answer:
The milky way is the broad white band of light seen across the sky at night and contains millions and millions of faint stars.

Question e.
In what ways is the moon similar to the earth?
Answer:
On the moon’s surface, which seems so smooth has high mountains and deep val-leys like those on the earth.

Question i.
What trouble did Galileo bring upon himself by telling truths about the heavenly bodies?
Answer:
Galileo’s new teaching caused great excitement among the learned men, because it meant that all their own teaching was completely wrong. They began to oppose him and many of them became his enemies. Then he got into trouble with the church.

Question j.
What is the humorous story about Galileo facing the Inquisition?
Answer:
Galileo knelt and declared that he no longer believed that the earth moved round the sun. As he rose from his knees, he whispered to himself, “But still it does move”

3. Rewrite the first sentence of paragraph 2 in three sentences.

Rewrite this sentence in two sentences. (Each sentence must have seven words)
Galileo’s was the first telescope that was ever turned towards the stars.

4. Re-order the jumbled words to make a sentence:

Question a.
Write down your sentence, punctuating it.
Answer:
Living on earth is expensive but it does include a free trip around the sun every year.

b. Read your sentence to your partner

Question c.
What does the word it refer to?
Answer:
‘It’ refers to living on the earth.

Question d.
Which word in your sentence should you emphasize? Read the sentence again stressing this word.
Answer:
Free trips every year around the sun.

Question e.
Did you get the joke? How many “free trips” have you made so far?
Answer:
As many trips as my age.

5. When you say the following words you stress the third syllable from the end.

Do not stress the consonant sound in the syllable. Stress the vowel sound. Prac¬tise saying the words.

7. Writing – Write a paragraph on “The Telescope” using the ideas in the text.

Telescope is a device which makes distant objects appear to be near and magni-fied several times over. In 1608 Lippershey invented the telescope when Galileo heard about this, he set to work on making a tele j scope for himself and succeeded in making j a better one.

He was the first man to turn the telescope towards the sky. Astronomers watch the skies with the telescope. Using his telescope which bought objects thirty times nearer, Galileo made important discoveries about the heavenly bodies. 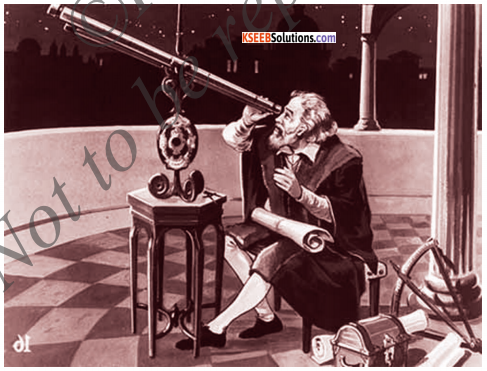 Long long ago people believed that the earth was fixed in the space and the sun and all other heavenly bodies went round it.

Galileo Galilei a great scientist and astronomer, first brought to light the facts that the earth revolved around the sun.

He was bom in 1564 at Pisa, Italy. In 1608 Lippershey invented a telescope which magnified objects several times over. Then an Italian scientist Galileo developed the telescope and made a telescope which brought objects thirty times nearer. Later the king of Venice, appointed him, Professor for life at the Univesity of Padua.

With the aid of this telescope, he made important discoveries about the heavenly bodies. He found that Jupiter had little moon that revolved round it. He found that sun had spots upon it.

Some fifty years earlier, Copernicus, a Polish astronomer had declared that the Earth was a planet but he could not prove this. Galileo realized that Copernicus was correct. Galileo taught this at the university which led to many confusions and he got into trouble with the church.

The inquisition asked him to declare that the earth did not move round the sun. He knelt down and made a public declaration about this, but as he rose from his knees, he whispered to himself, “But still it does move”.

The court ordered him not to teach this wicked ideas any more. But Galileo did not obey the churchs orders for long. He was again tried as a nonbeliever. After a long trial, he was sent to prison, considering his age he was sent home after 22 days. 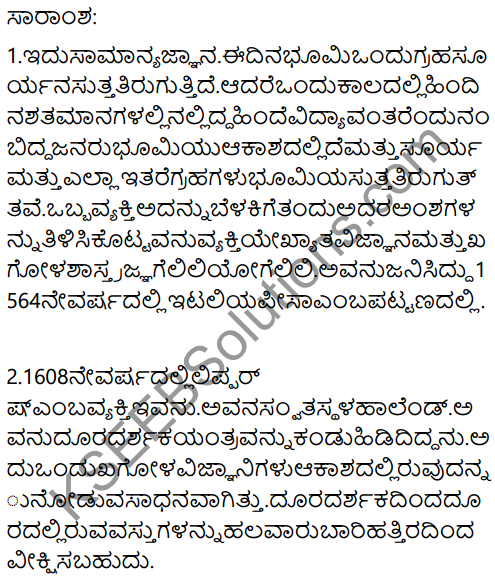 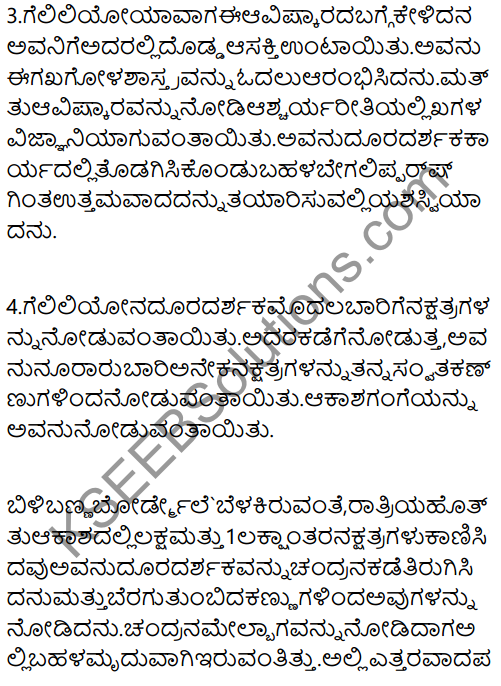 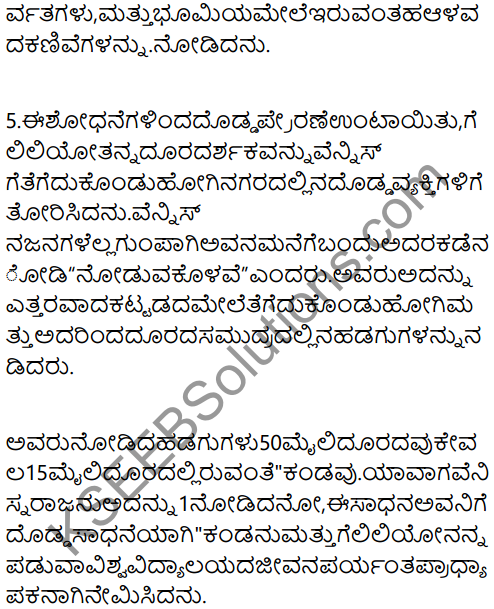 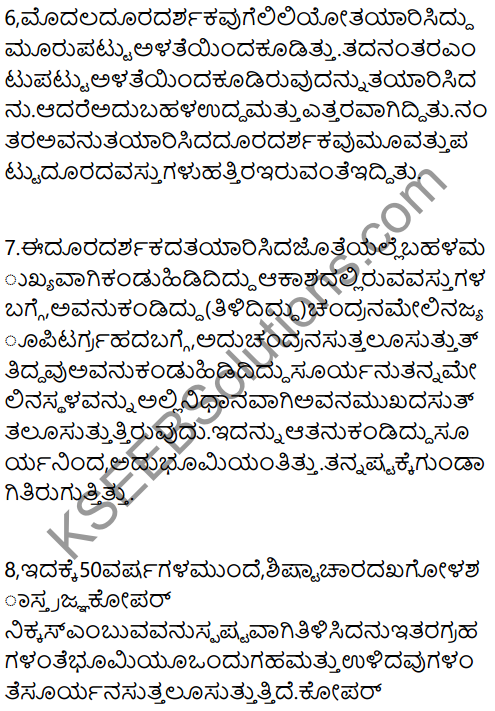 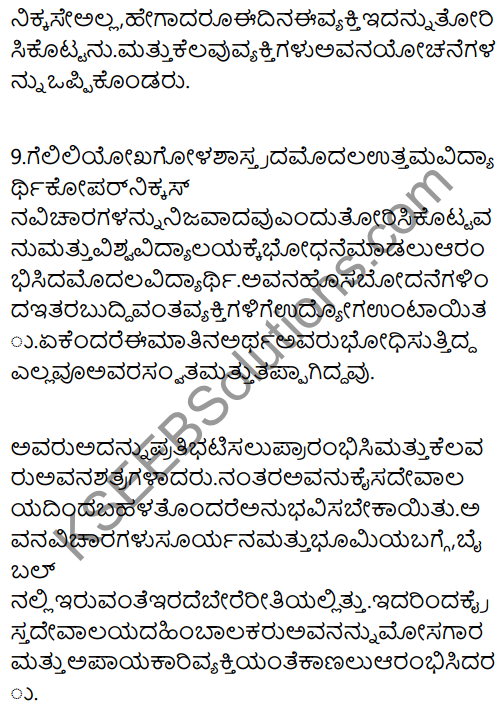 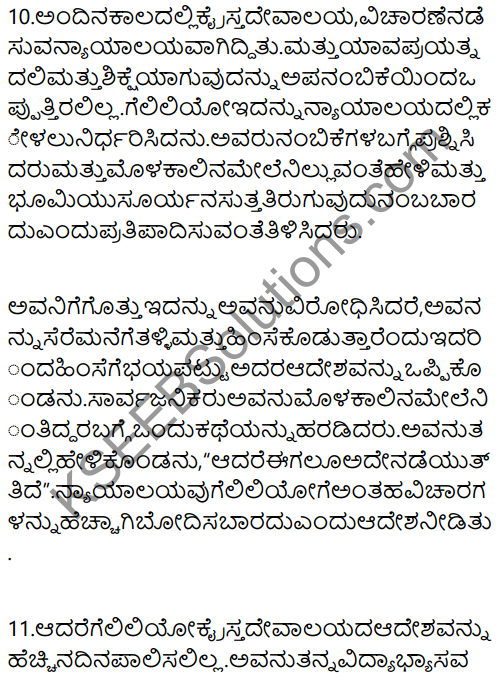 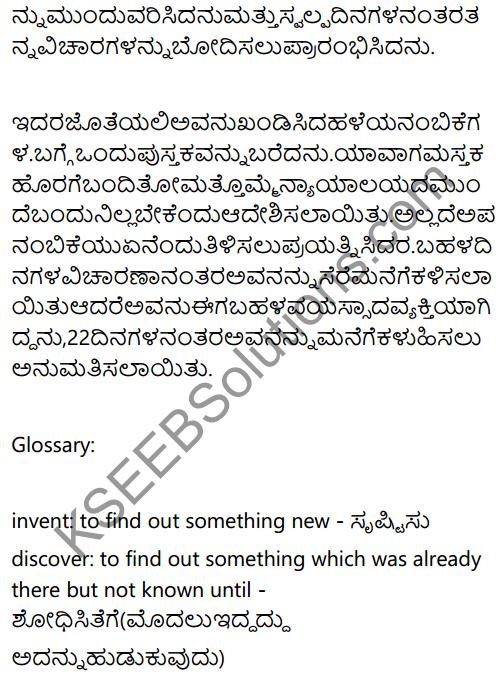 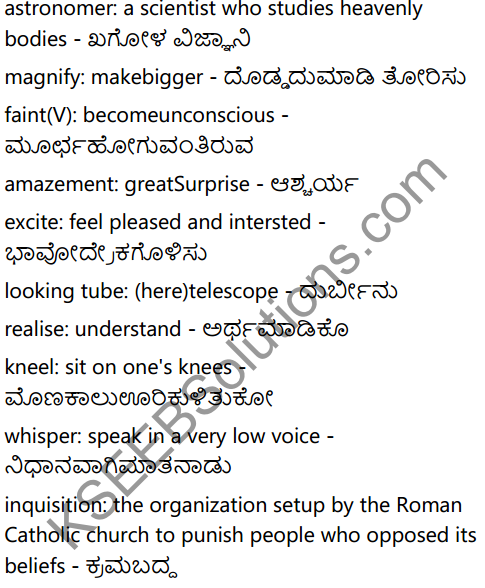 Hope the information shared regarding KSEEB Solutions for Class 6 English Chapter 3 Galileo Questions and Answers is true and genuine as far as our knowledge is concerned. If you feel any information is missing do react us and we will look into it and add it accordingly.