The Parable of Talents Questions and Answers, Summary, Notes

I. Choose the most appropriate answers

II. Answer the following questions in two-three sentences each.

Question 2.
What did the slaves do with their talents?
Answer:
The first two slaves used their talents, thus multiplying them, but the one who had only one talent did not use it but simply buried it or hid in the ground.

Question 4.
How was the third slave published?
Answer:
The master took away the only talent in the first slave and gave it to the one with the ten talents.

I. Answer the following in a paragraph each (six-eight sentences).

The third slave had received one talent went off and dug a whole in the ground and hid his master4 s money. He did not use his ability, and he was a lazy person. His master gave his talents to his slaves according to the slaves ability.

Question 5.
What would you have done if you are . in place of the third slave?
Answer:
When I had received one talent I would have at once traded with them, and made one more talent. and impressed the master when he came back.

Question 7.
“Reaping where you did not sow, and gathering where you did not scatter seed”. What do you understand by this statement?
Answer:
The statement means that someone has done the hard work of sowing the seeds, but someone else is reaping the harvest. It means that a person is benefiting from other people’s work, i.e., Someone else is sowing or scattering the seeds and some other person is harvesting the crop.

I. Using a dictionary write the past forms of the following verbs

II. Here is a letter written by Sneha to her father on her trip to the Nandi Hills with her friends. Read the letter and correct the errors in the letter.
Dear father,
We go to the Nandi hills yesterday. There are thirty students in the party. We travel by bus. We leave the school at 9 a.m. We reach there at 10 a.m. On the way we saw on both the sides, tall trees and thick bushes and monkeys too. The road was nice. We play games and rest for three hours. We return at 5 p.m. All of us enjoy the trip.

Yours lovingly
Sneha
Answer:
Dear Father,
We went to Nandi hills yesterday. There were thirty students in the party. We traveled by bus. We left school at 9 AM. We reached Nandi at 10 A.M. On the way we saw on both sides of the road, tall trees, thick bushes and monkeys too. The road was smooth. We played games and took rest for three hours. We returned at 5 P.M. All of us enjoyed the trip.

II. Rewrite the following sentences using the past form of the verbs underlined.
e.g.

IV. Write in 7 or 8 sentences all that you do every day in your home before you leave for your school

I get up at 5 ‘O’ clock
I brush my teeth
I refresh myself
I pray and meditate
I do my homework
I get dressed my uniforms
I have my breakfast
I put my shoe on.

V. Write in five or six sentences how your mother usually prepares coffee or tea.

You may begin writing ……….
My mother boils the water.

VI. This is what Shankar of class IX did in his school. Read It completely and write in full sentences the actions of Shankar.

Yesterday Shankar attended the English class. He visited the science lab. He read a book in English from the library. He listened to his science teacher and he had lunch with his friends. After coming back to house he did problems in arithmetic and wrote practical records and he went to play in ground He talked to friends in grounds. On the next day he discussed with the geography teacher on project work.

The Parable of Talents Summary In English

This story is about a competition between physical strength and thinking ability. In this lesson, the Lay servant (slave) searches for his buried talent while the two other servants present their earnings to their master. The parable of the talents is one of the parables of Jesus, which appear in two of the synoptic, canonical gospels of the New Testament: Mathew 25:14-25: 30.

The Parable of Talents Summary In Kannada 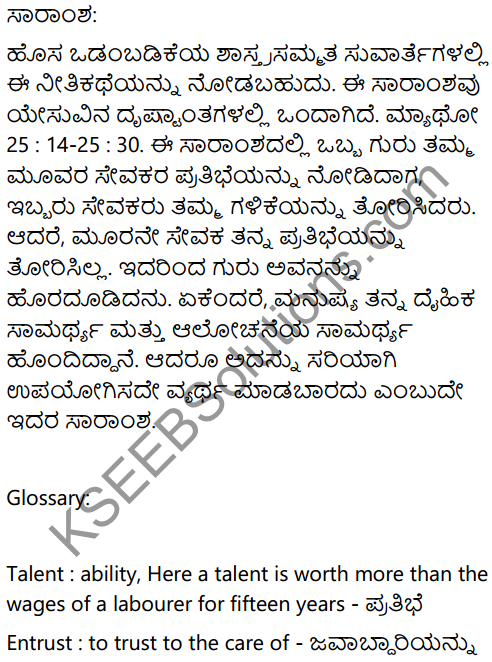