Students can Download English Lesson 5 The Great Spirit of the Sal Tree Questions and Answers, Summary, Notes Pdf, KSEEB Solutions for Class 5 English Karnataka State Board Solutions help you to revise complete Syllabus and score more marks in your examinations.

The Great Spirit of the Sal Tree Questions and Answers, Summary, Notes

Comprehension: I. Choose the most appropriate answer from the four alternatives given below each statement.

Question 3.
The tree-spirit requested the king, that it be felled.
a) in one stroke all at once.
b) in three strokes
c) by two strokes
d) branch by branch
Answer:
d) branch by branch II. Say whether the following statements are True or False.

III. Answer the following questions in two or three sentences each.

Question 2.
Name the animals suggested by the king for pulling the tree.
Answer:
Horse, bullock and elephants

Question 3.
How did the tree-spirit describe itself to the king?
Answer:
The tree spirit described itself as the spirit of the sal tree. It said that it has been worshipped by the people of many village, for a thousand years, and never has anything but good come out to them. Birds, wild animals and people take shelter under its branches. It’s crown is made of waving greenery, and it has hundred strong arms. It has the heaviest and knottiest limbs.

II. Match column I with II, Column 1 has animals suggested by the king. Column B has the reasons for not being able to use the animals to drag the tree.

I. Answer the following questions in a paragraph (six to eight sentence

Question 1.
What did the foresters warn the tree spirit about? How did they know that he had answered their plea?
Answer:
The foresters, at last, decided to cut a splendid sal tree which grew nearby the king’s palace. A tree – spirt, worshipped by the people of many villages was within it. So they brought garlands, lamps and music to offer them to the tree spirit and to warn him that he must leave his abode within seven days. The tree spirit heard and understood well enough what was about to happen. It remained quiet, then, all its leaves began to whisper, and his topmost branches bowed. The foresters went away satisfied that he had answered their plea.

Question 2.
‘Some of the little ones may escape’ what quality of the tree-spirit does this statement convey?
Answer:
After the foresters had conveyed their decision to cut the mighty sal – tree. The tree – spirit within it was sure that it’s fall would crash all the little sal trees that had sprung up and thrived under – its protection. The tree – spirit ‘thought to itself that it does not care for itself but for the children’s sake, it requested the king to cut it in three parts, so that the young sat trees growing around it will not be crashed when it would fall to the ground. The tree was ready to suffer the stroke and endure the agony not once but thrice for the sake of its children. This shows the generous and protective nature of the mighty sal tree.

Question 3.
The king felt that the spirit of the Sal tree was nobler than his own. Why did he feel so?
Answer:
The tree-spirit went to the king and requested strangely that ‘Let me be felled in three parts. The king had never ever heard such desire to suffer the death stroke. The tree spirit went on explaining that dozens of young Sal trees have sprung from me and thrived in my generous shadow. If I was felled with one mighty storke, my weight would certainly crush all my children to death’.

Substitute the sentences with one word. Choose from the choice given in the box below.

II. Pick our the opposites of the’ following words from the text.

Grammar: I. Now identify the adverbs in the folio wing sentences.

II. List differently actions that you do between Warn and I pm at school every day and say how out do them. Eg:

The Great Spirit of the Sal Tree Summary In English 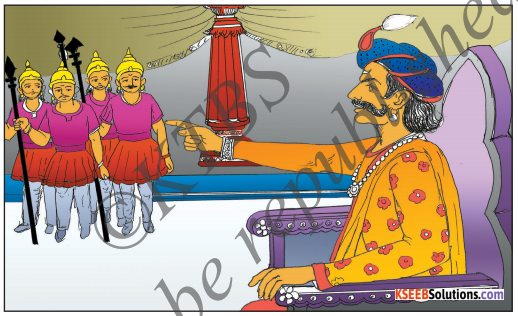 This story happened around the north India. Years ago a king who wanted to build his a palace upon a single wooden column that was carved from one of the biggest trees in his kingdom. He told his ministers to send men to cut the mightiest tree and bring it. The men went around but found only one tree. 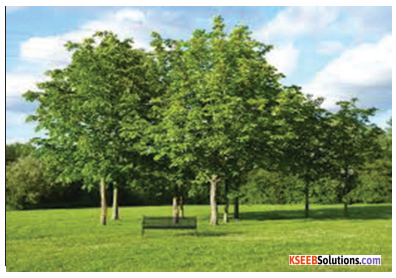 The people of that village worshipped that tree, because the tree-spirit was within it. When the woodcutters came to cut the tree, it decided to go to the king and plead that it should be cut in three strokes because his family are around him. At the end of the story, the king changed his mind and understood the importance/value of trees.

The Great Spirit of the Sal Tree Summary In Kannada 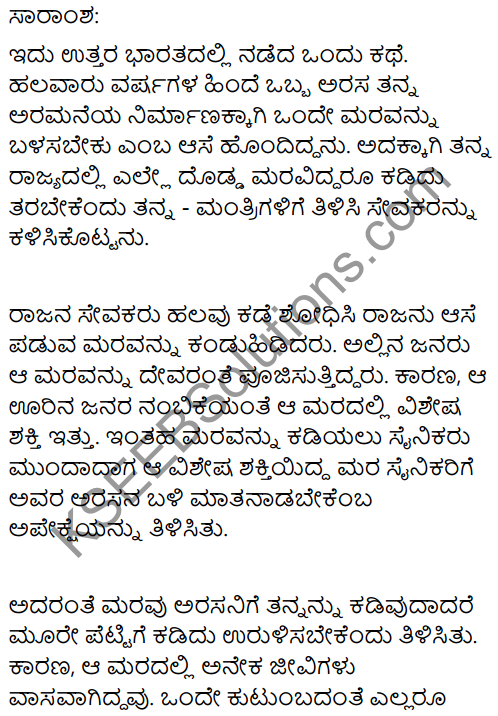 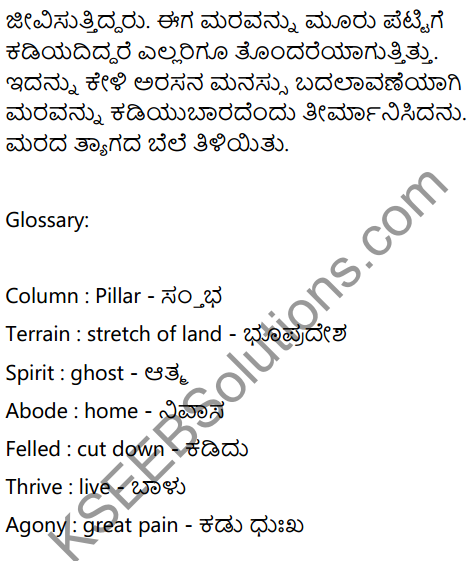