I. Answer the following questions:

Question 1.
What are the disabilities of the speaker in the poem?
Answer:
Wheelchair-bound physically challenged and deafinute.

Question 2.
Why are the words of the speaker described strange?
Answer:
The speaker in the poem is not only physically disabled but also deaf and dumb. So if the speaker tries to speak, it appears strange to normal people.

So he wants to understand that like every other human being, he is also able to think and feel, and expects us to not ignore him. He wants us to include him and share his thoughts and feelings.

Question 7.
Have the disabilities in the speaker affected his/her thinking?
Answer:
No, his thinking is for beyond the ordinary people

Question 8.
Is the poem a request, or an acceptance or affirmation or a description of the poet’s helplessness.
Answer:
It is a request became the speaker request not to lock him out in their ignorance.

Question 9.
Do you think the poem has a universal appeal? if so what is the appeal built in the poem?
Answer:
Yes, the poem has a universal appeal. Normal people should realize that even handicapped and differently-abled people are also human beings. The same thoughts, feelings and ideas also run in them. It is better to treat them normally and include them in all our normal daily activities.

Question 10.
What impression do you get about the speaker in the poem?
Answer:
The speaker has the dream in his life to achieve something.

Question 12.
Explain: Saintly patience
Answer:
The ability to stay calm without complaining even when it is very difficult to do so (others expect disabled people to behave like saints – they forget that they are just like everybody else).

Question 14.
What do you think can be done to make the outsiders feel inclusive?
Answer:
By making them feel about the life of the differently-abled people.

The Outsider Summary In English 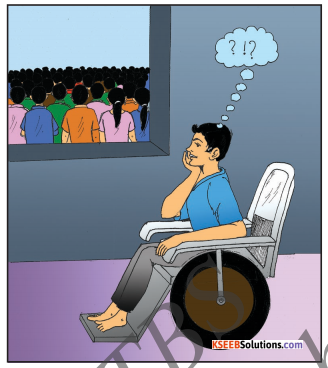 The poem’s ‘Outsider’ is written by an anonymous poet. The poet may also have been physically challenged. He / She has expressed his / her feelings and aspirations. The poem is aptly titled as ‘The Outsider’ because normally able people consider them as outsiders (not one among themselves) and treat them differently.

The poet describes him/herself as handicapped and wheelchair-bound. Normal people expect them to sit silently and smile and let the other people go about their business. They expect the physically challenged people to be calm and never worry about their disabilities.

The poet says that although he/she is physically disabled they are mentally as able as a normal person. They also have the ability to think and form ideas which they yearn to share with others. But because their thoughts, ideas and words appear strange to normal people, no one bothers to listen to them.

They are usually ignored by others. The poet is unhappy that his/her tongue or lips, cannot perform the simplest task when required because the speaker is also dumb. But the poet is happy to let us know that his/ her mind is just as active as normal people’s are. He / She pleads the normal people to recognise and need to his/her thoughts and ideas and requests them to not ignore them.

From the first line of the last stanza of the poem we can deduce that the poet may also be deaf because he/she says that she seems to not understand what the normal people talk. But he/she likes to be included in the daily business of the normal people. She pleads with them to touch, include and hold her hand.

She pleads with them to not ignore her and tells them that even she is alive (she also has a life) and is able to spend time with others, just like normal people. She urges us to let us share her life with us even if she is disabled – because it was her destiny that she was bom like that.

The Outsider Summary In Kannada 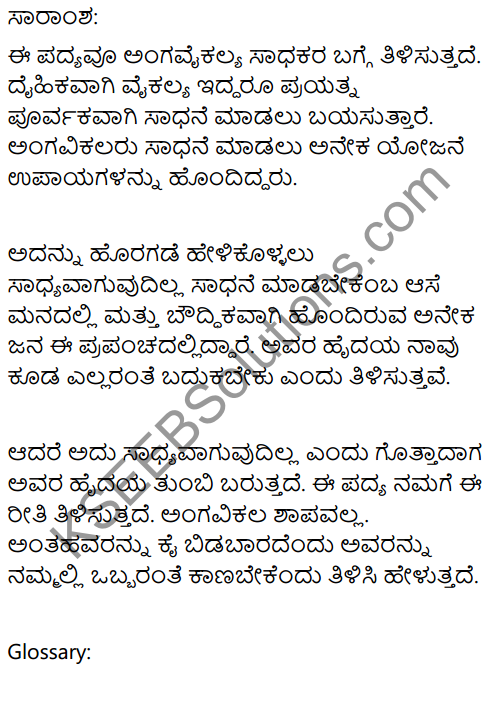 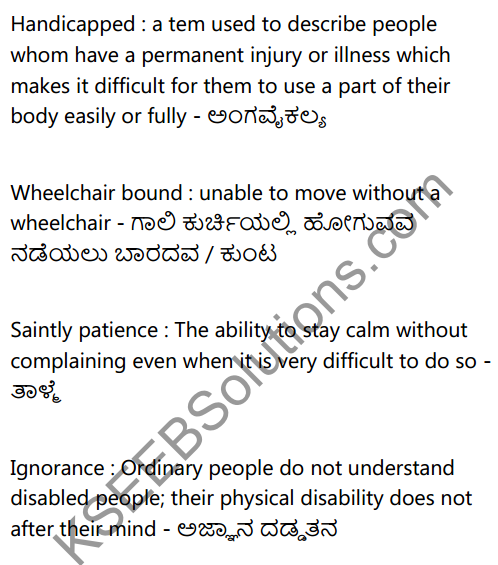