Question 1.
State Ohm’s Law.
Answer:
Ohm’s law: When all the physical conditions surrounding the conductor remain unaltered, the electric current is directly proportional to the potential difference between its ends.

Question 3.
Write an expression for force experienced by a straight conductor of length \(\vec{l}\) carrying a steady current I, moving in a uniform external magnetic field \(\vec{B}\).
Answer:
F = BIl sin θ where ‘θ’ is the angle between the magnetic field and length of the conductor.

Question 4.
What is ‘retentivity’ in magnetism?
Answer:
The property of a material to retain the magnetism even after the removal of the magnetizing field is known as retentivity.

Question 6.
State ‘Lenz’s law in electromagnetic induction.
Answer:
Lenz’s law states that the induced current is always in such a direction as to oppose the cause which produces it.

Question 8.
What is ‘wattless’ current?
Answer:
A component of current that does not allow the circuit elements like capacitors and inductors to dissipate energy in them is called wattless current. 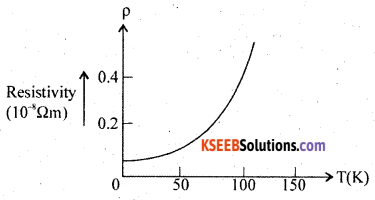 Question 12.
Write an expression for cyclotron frequency and explain the terms.
Answer:
Frequecy ‘f’ = \(\frac{\mathrm{B} q}{2 \pi \mathrm{m}}\)
where B – Magnetic field
q – charge on the particle
m – mass of the perticle

Question 13.
State and explain ‘Curie’s Law’ in magnetism.
Answer:
The magnetic susceptibility of a paramagnetic substance is inversely proportional to the absolute temperature.

Question 16.
What is the polarization of light? Name any one method of producing plane polarised light.
Answer:
The phenomenon of confining the vibrations of the electric vector in a specific direction perpendicular to the direction of wave motion is called polarisation.

The other methods are by

Question 19.
Give any three properties of electric field lines.
Answer:

Question 22.
Describe the coil and bar magnet experiment to demonstrate the phenomenon of electromagnetic induction.
Answer:
(a) Magnet and coil experiment: If one end of a magnet is suddenly introduced into a coil connected to a sensitive galvanometer it shows a momentary deflection. This shows that a momentary current and hence an instantaneous emf is produced ¡n the circuit and the direction of the current depend on the pole towards the coil. The current produced is called an induced current. If the magnet is withdrawn suddenly, a sudden deflection is again observed but in the opposite direction. The deflection is greater if the magnet is introduced or withdrawn quickly. No induced emf is obtained when there is no relative motion between the coil and the magnet.

(b) Coil and coil experiment: Consider two coils P and S placed closed to each other. Coil P connected to a cell through a key Swiss called the primary coil. The other coil S connected in series with a sensitive galvanometer G is called the secondary coil. On pressing Sw a momentary deflection is noticed in the galvanometer. When the key is released the galvanometer deflects in the opposite direction. However, no induced emf is obtained when a steady current flows through the primary, as long as the secondary coil is at rest.

Question 23.
Derive an expression for an effective focal length of two thin lenses kept in contact.
Answer:
(a) Thin lenses in contact:

Question 26.
What is the function of the ‘receiver’ in the communication system? Draw the block diagram of the AM-receiver.
Answer:
A receiver is a device that detects, demodulates, and amplifies the received message.

Question 27.
Using Gauss’s law in electrostatics, obtain an expression for the electric field due to a uniformly charged thin spherical shell at a point.
(i) Outside the shell and (ii) Inside the shell
Answer:
Gauss’s theorem: The total outward electric flux passing through a closed surface in air is (\(\frac{1}{\varepsilon_{0}}\) ) times the total charge enclosed by it. 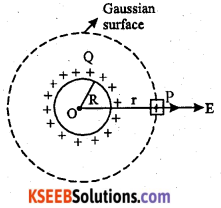 Let ‘+Q’ be the charge enclosed by a hollow conductor of radius ‘R’.
Let ‘p’ be a point at a distance ‘r’ from the center of the conductor.
Let ‘ds’ be a small element of the area surrounding the point.
A normal drawn from the point coincides with the direction of \(\vec{E}\).
Hence cos 0° = 1.
From Gauss’ theorem, 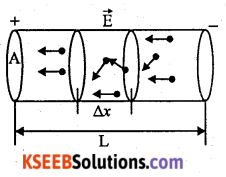 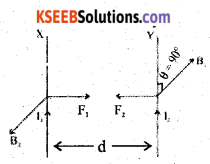 The magnetic field at any point on the conductor Y due to current I1 in the conductor X, is given by \(B_{1}=\frac{\mu_{0}}{4 \pi} \frac{2 I_{1}}{d} \cdot \overrightarrow{B_{1}}\) acts in a direction perpendicular to the plane containing the two conductors. The conductor Y which carries current ‘I2’ experiences a mechanical force due to B1 acting on it and this force is given by F1 = B1 I2 L sin θ.

One ampere of current can be defined as that constant current which when maintained through each of the two infinitely long straight parallel conductors of the negligible area of the cross-section in the same direction placed 1 meter apart in vacuum, causes an attractive force of 2 × 10-7 Nm-1 length on each conductor.

Question 30.
Derive an expression for the fringe width of the interference pattern in Young’s double-slit experiment.
Answer:
Let A and B be two slits separated by a distance ‘d’. Let ‘X’ be the wavelength of light. Let ‘D’ be the distance between the screen and the double slit. Let ‘C’ be a point on BP such that AP ~ CP. 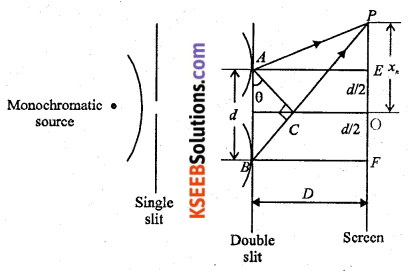 Question 31.
Describe with suitable block diagrams, the action of the PN-junction diode under forward and reverse bias conditions. Also, draw I-V characteristics.
Answer:
Reverse Bias: When the battery is connected across the junction such that the p side is connected to the negative terminal and n side to the positive terminal, the p-n junction is said to be reverse biased. In this case, the applied voltage adds to the effect of junction p.d. and hence majority carriers cannot cross the junction. The current through the circuit is practically zero. Thus reverse bias offers a very high resistance but the small current of the order of a few mA flows through the circuit due to the minority carriers in the p and n regions. As the applied voltage is gradually increased very large current results at a particular voltage. This voltage is called the breakdown or cut-in voltage.

Substituting this value of mv2 in equation (2) 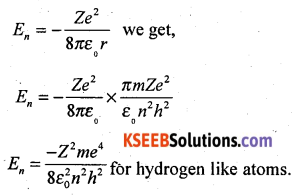 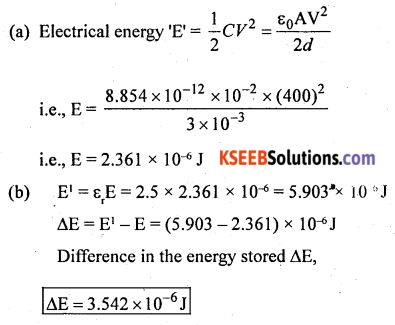 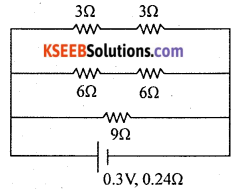 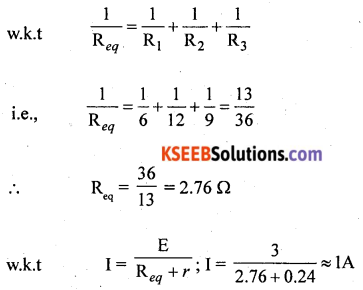 Question 35.
A 20 Ω resistor, 1.5 H inductor, and 35 µF capacitors are connected in series with a 220 V, 50 Hz ac supply. Calculate the impedance of the circuit and also find the current through the circuit.
Answer: 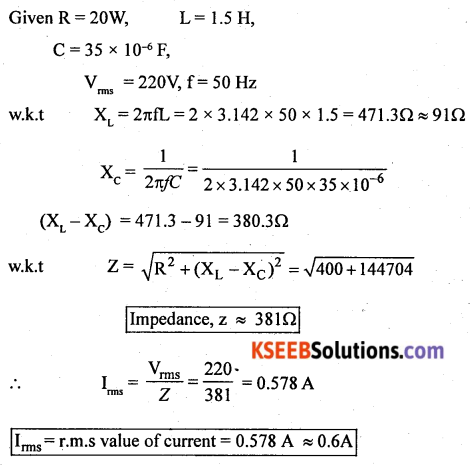 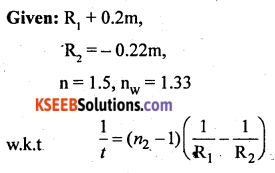 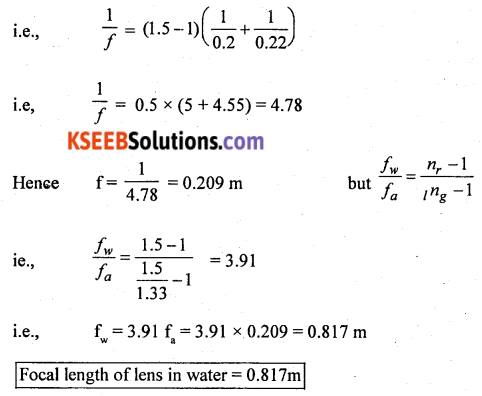 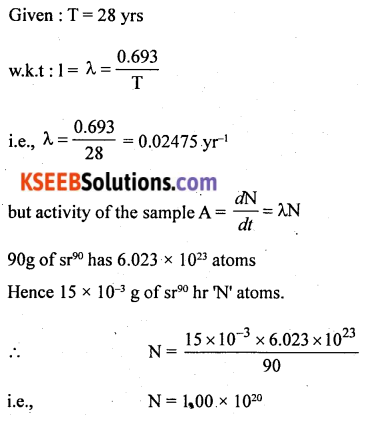 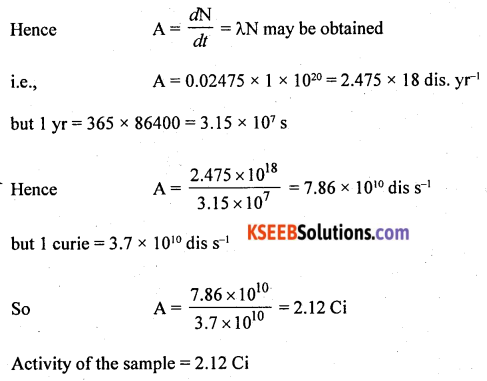