Question 3.
Where on the Earth’s surface is the magnetic dip zero?
Answer:
At equator, dip is zero

Question 5.
What is the significance of Lenz’s law?
Answer:
Law of conservation of energy.

Question 7.
What is the ratio of the nuclear densities of two nuclei having mass numbers in the ratio 1:3?
Answer:

Question 8.
Define current amplification factor in a common – emitter mode of transistor.
Answer:
It is defined as the ratio of change in collector current ( ΔIc )to the change in base current (ΔIb) at constant collector emitter voltage (VCE) when the transistor is in active state 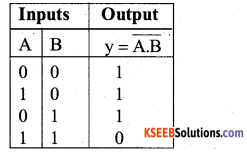 Question 10.
Why sky wave propagation is not possi¬ble for waves having frequency more than 30 MHz?
Answer:
The sky wave range is short & it is used in short wave broad cast service.

Question 14.
What is meant by Self Inductance and Mutual Inductance?
Answer:

Question 15.
What are electromagnetic waves? Write the expression for the velocity of electro magnetic waves in terms of permittivity and magnetic permeability of free space.
Answer:
The waves in which there are a sinusoidal variation of electric & magnetic field vectors at right angles to each other & also right angle to the direction of propagation of the wave is called e.m waves.
∴ The expression for velocity of e.m. wave is
\(C=\frac{1}{\sqrt{\mu_{0} \varepsilon_{0}}}\) Where µ0 → is permeability of free
space, ε0 → is the permittivity of free space.

Question 17.
Define :
i) photoelectric work function
ii) electron volt (ev)
i) Photoelectric work fraction : the minimum energy required to remove an electron from the metal surface is called work function, i.e. w = hV0
Where h → is planck’s constant
V0 → is threshold frequency
ii) Electron volt is the kinetic energy gained by an electron when it is accelerated through a potential difference of 1 volt.
i.e. lev = 1.602 × 10-19J.

Question 18.
Draw the block diagram of a AM receiver.
Answer:

Question 19.
Derive an expression for potential energy of a system of two charges in the absence of external electric field. 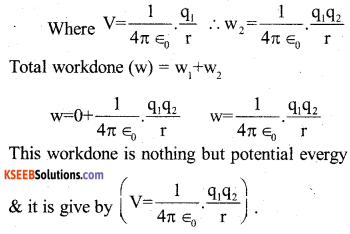 Question 20.
Arrive at an expression for drift velocity. 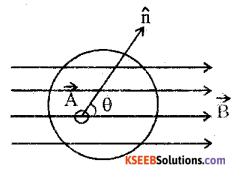 Question 23.
With a diagram, explain the working of a transformer.

Answer:
AC voltage is applied to the primary, it creates a varying M.F. & hence a changing magnetic flux in the core. Since the secondary coil is magnetically coupled, due to the mutual induction the changing flux causes induced emf in it. Thus, the power is transferred from primary to secondary.

Question 25.
What are the matter waves? Write the expression for De – Broglie wavelength of a particle and explain the terms.
Answer:
The waves associated with material particles in motion is called matter waves. The expression for de Broglie wavelength is \(\lambda=\frac{\mathrm{h}}{\mathrm{mv}}\)
where
h → is Planck’s constant
m → is mass of moving particle
v → is the velocity of moving particle. 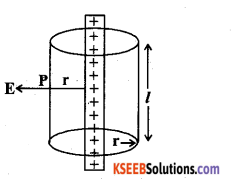 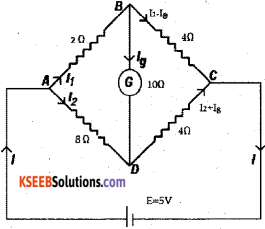 Question 29.
Two straight parallel conductors are placed at certain distance in free space. The direction of current in both the conductors is same. Find the magnitude and direction of the force between them. Hence define ampere.
Answer: 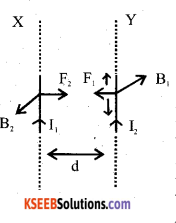 Consider two infinitely long straight parallel condu ctors x & y carrying a current I1 & I2 respectively. Let d is the ⊥r distance between them.
Let I1 is the current flowing through x conductor, it produces a M.F. (B1)

Now the conductor Y carrying current I2 in the M.F.B, it experiences a mehanical force of length 1 is 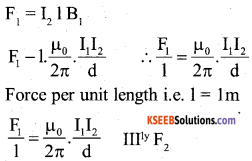 Ampere is the steady current which when flowing through each of 2 infinitely long straight ||le conductors placed in the air at a distance of lm produces a force of 2 × 10-7 N/m. 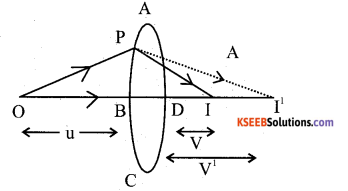 Consider a thin convex lens of focal length f & R.I (n) placed in air as shown in fig let R1 & R2 → are the of curvatur of the surfaces ABC & ADC of the respectively.
o → Luminous point object on the principle axis.
A ray op invident at p, after refraction, emerges along QI & meet at I on the principal axis.
Image formution takes place in two stages. (1) Refraction at the surface ABC In the observe of ADC, the refracted ray is meet at I1, then

(2) Refraction at the surface ADC the image I1 acts as a virtual object to form a real image at a distance V, then 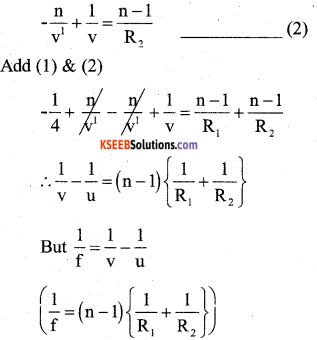 Question 31.
Assuming the expression for radius of the orbit, derive an expression for total energy of an electron in hydrogen atom.
Answer:
Consider an electron of mass m, charge, e revoking around the nucleus of radius of r. The charge on the nucleus + Te.
∴ T.E = KE + P.E
T. E = K + U ………… (1)
For circulation
Centripetal force = Electrostate force bn nucleus & electron. 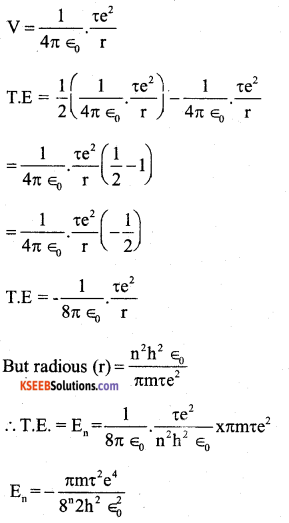 Question 32.
With the help of circuit diagram, explain the working of NPN transistor as a common emitter amplifier.
Answer:
The circuit diagram of a CE amplifier using NPN transistor is as shown m fit. The input circuit is forward biased & the output circuit is reverse biased when the ac input signal to be amplified is fed to the base-emitter circuit. The output voltage V0 varies in accordance with the relation, V0=VCE =Vcc – IcRc, These variations is the collector voltage VCE uppers as amplified output.

During the -t-ve half cycle of ac input signal the forward base of emitter as junction increase Due to this base current IB increase & hence collector current IC increases. As a result of this ICRC increases output voltage VO this indicates that the +ve half cycle of input ac signal voltage is amplified through -ve half cycle. 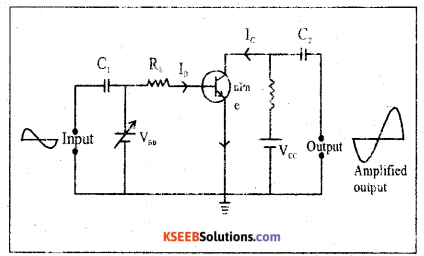 Question 33.
Charges 2 µ C, 4 µ C and 6 µ C are placed at the three corners A, B and C respectively of a square ABCD of side x metre. Find, what charge must be placed at the fourth corner so that the total potential at the center of the square is 0
Answer: 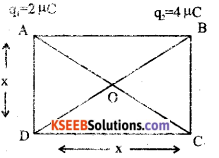 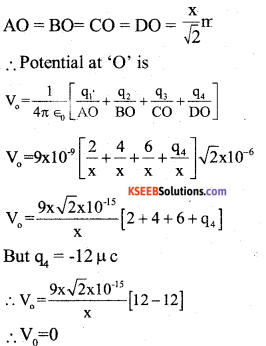 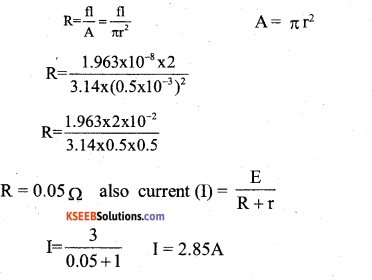 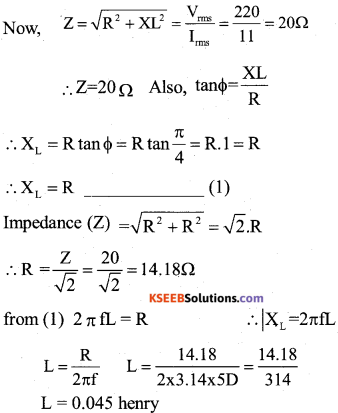 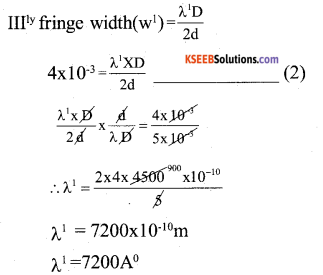 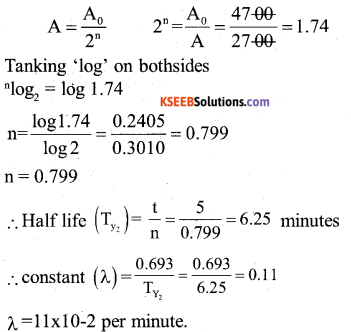