You can Download Chapter 6 Population of India Questions and Answers, Notes, 2nd PUC Geography Question Bank with Answers Karnataka State Board Solutions help you to revise complete Syllabus and score more marks in your examinations.

Question 12.
What is migration?
Answer:
The movement of people from one place to another is known as migration.

Question 17.
In which year the first population census in India was conducted.
Answer:
In 1872.

Question 19.
Name the state recorded Lowest literacy rate of India.
Answer:
B b w with 63.82% is the Lowest Literacy state.

Question 22.
Which state of country first birth control area project was started and when?
Answer:
Uttar Pradesh and Karnataka, in the year 1973.

Question 25.
What is family planning?
Answer:
It is a programme to reduce the number of persons in a family. The first camp is hold 1961 in Maharastra. ‘

Question 28.
State the percentage of Urban and Rural population in India.
Answer:
23.6% lived in Urban areas
76.4% lived in Rural areas.

Question 29.
Who is called unproductive population in India?
Answer:
Generally, below the age 0-14 years infants and above the 60 years old age considered as unproductive.

Question 31.
What is ‘Brain drain’.
Answer:
Highly calculated and skilled professionals have migrated from India to some of the most advanced countries like the USA, UK, Canada etc is known as brain drain.

Question 2.
What is Population density?
Answer:
The total number of persons per square kilometers area is known as density of population.

Question 6.
What is the difference between Intra-State and Inter-State migration?
Answer:

Question 12.
What is the meaning of Census?
Answer:
It is an official periodic count of population. This includes the information such as Sex, age, occupation, etc is called census.

Question 13.
What are the different stages of growth of population in India.
Answer:
The four Wellmarked stages in Census report 2011 are as –

Question 15.
What are the birth rate and death rates?
Answer:

Question 17.
Define Literacy.
Answer:
Literacy is defined as a person aged 7 years and above his ability to read and write with understanding short & simple statement in any language.

Question 18.
What do you mean by Grey India?
Answer:
Life expectancy is projected to increase more by 2040 and more percentage of the population at this stage will have Gray hair. This situation is described as grey India.

1. In the first stage: In this decade, population growth was naturally curbed with the outbreak of Plague, Cholera. Malaria, influenza and other epidemics. Thus the decade is considered as ‘the great divide in the history of Indian Census’

2. In the second stage: The population can be considered as moderate The population grow ing from about 251 million (1921) to 361 million (3951), an increase of about 110 million. The main reason was decline in death rate due to control of epidemics like Plague, Cholera etc.

3. The third stage: is very important, because of the growth rate of population is very high. The Population grew from 361 million (195 1) to 686 (1981). an increase of about 325 million The growth has been very rapid after independence. The government of India was implemented many Socio-Economical Programs in all sectors.

4. The fourth stage: It completely differs from other three stages. Here the trend of growth rate of population is gradually slowing down. We can easily justify that, the period from 1981 to 2011 is referred to as a high growth with definite signs of slowing down. 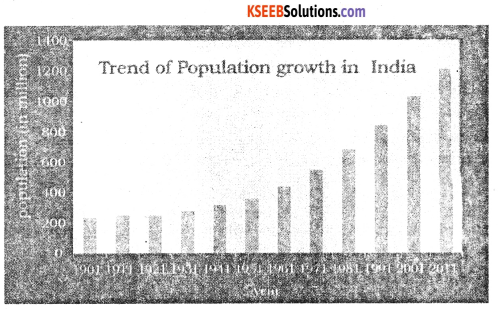 Causes for low death rate : There are many causes for declining trend of deathrate they are control of epidemics, decline in the incidence of Malaria and tuberculosis expansion of medical facilities, control of infant mortality, spread of education, improvement in the nutrition level etc, due to all of these programs and activities, death fate has been declining from one decade to another.

Question 3.
Explain the factors responsible for uneven distribution of population in India.
Answer:
The important factors are
1. Physical features – The Mountain and hilly regions are emost unstable for human habitation. For example; Northern Mountain, Western and Eastern Ghats, North Eastern hilly regions are moderately populated. The fertile great plains of North India and the river deltas have high density of population.

3. Soils – The fertile soil regions have high crop productivity. So, the Northern, Eastern
and Western coastal plains are most densely populated. In contrast, infertile sandy areas are less productive and they are low populated. :

6. Security – People like to stay in a good security of life and property. Hence it is also influenced on population distribution. For example, Border areas of Jammu and Kashmir and Rajasthan are sparsely populated.

3. Age structure – On the basis of the age the entire population is divided into three major categories namely infants (0-14 year). Adults (15-59 years) and aged group (above 60 years).

(2) Shortage of food & -Malnutrition : A large number of people are poorly fed. Malnutrition is prevailing throughout the country. It is fatal for the development of the country.

(5) Increase of Unproductive population : Below 15 years (Infants) and above 60 years (old age) are unproductive. They are dependent on earning persons. Thus rapid growth has increased dependents rather than producers. ‘

(6) Others : Slow in economic development, mass poverty, low standard of living, political unrest and the social problems like theft robbery, immortality, corruption and the growth of slums, environment pollution are also directly related to the popualtion explosion.

1. Rural to Rural: This is estimated that about 65.2% of total migration is of this category’.
Female migrants dominated in this stream. Thus it is an important example for matrimonal migration and it is called women migration.
2. Rural to Urban : Rural to Urban migration (17.6%) is second important type of migration. Rural – Urban migration is caused by both push of the rural areas as well as pull of the urban areas.
3. Urban to Urban : Generally, people like to move from small town with less facility to large cities with more facilities.
4. Urban to Rural : Urban areas are usually affected by the pollution.
The retired and aged people prefer to spend their old age life in nearby villages. Thus people move from Urban to Rural.

Question 9.
Discuss the factors affected on Human development index in India.
Answer:
Factors influencing on HDI of India are discussed below:

1. Birth and Death Rate : Declining of birth rate has been much slower than that of the death rate. This results in rapid increase of population. It affects on slow economic growth of the country. It is the main cause for declining of human development index.

2. Life Expectancy : Life Expectancy has gone up 65.77 years for males 67.95 years females respectively in 2011-12. This is due to the consequence of the expansion of food security and medical facilities. It helps to raise the HDI in the country.

3. Food and Nutrition : According to the 2011 Global Hunger Index (GHI) report, India has 15th rank among the leading countries with hunger situation.

4. Literacy : Education is the key for socio-economic progress. The Indian literacy rate grew to 74.04% in 2011 from 12% at the end of the British rule in 1947. The large proportion of illiterate females is another reason for the low literacy rate in India. Due to this there is decline in the Human development Index of the country.

(a) Family Planning Programme : India was the first country in the world to adopt the family planning programme in the year 1952. The main aim is to control births by various means such as free sterilization (Vasectomy for males Tubectomy for females). Adopting contraceptives etc.

(b) Improvement of the status of women : The social, economic and political status of women have been improved through education and various women welfare scheme. For ex: In Karnataka free Education, Government jobs, Bhagyalaxmiyojana etc.

(d) Area Projects : Under this project health worker visit door to door and advise. In addition they are also motivating the people to adopt contraceptives and undergo sterilization. .

(e) Publicity : Broadcasting the benifits of small family through the Radio, Television and Newspapers etc.

Question 11.
Explain the distribution of density of population in India.
Answer:
In India, the population is unevenly distributed. This is due to varied geographical & cultural -Matures. Uttar Pradesh is the most populous state in the country with 19975 million people in Contrast Sikkim with a population of 6.0 lakh has the lowest in the country.

Distribution of population in India has been divided into 3 Zones.

Please draw the Density of population map. It is in textbook page no – 94.

Question 12.
What is the meaning of Migration? Explain the impotant causes of Migration.
Answer:
The movement of people from one place to another place is knowm as Migration.
Causes of Migration : Migration is caused by a variety of factors including economic, social and political factors. Some of them are briefly discussed below.