Question 1.
Define ‘Human Geography’.
Answer:
According to Ellen C. Semple – “The study of changing relationship between the unresting man and the unstable earth.”

Question 2.
According to 2012 mention the total population of the world.
Answer:
Seven billion population (7 billion).

Question 3.
What is ‘Internet’?
Answer:
An Inter connected system of networks that connects computers around the world.

Question 4.
Which is the first mega city of the world?
Answer:
Newyork is the largest mega city in the world.

Question 5.
Which state has lowest literacy rate in India?
Answer:
Bihar with 63.82% is the Lowest Literacy state.

Question 9.
Which city is called ‘Jawa of India’?
Answer:
The Gorakhpur distric of Uttar Pradesh is known as Jawa of India.

Question 10.
What is ‘Environmental pollution’?
Answer:
Environment Pollution means the release of Harmful substances and contamination of environment.

Question 14.
What is migration? Give any one reason of migration.
Answer:
The movement of people from onc place to another place is known as Migration.
Causes of Migration : Migration is caused by a variety of factors including economic, social and political factors. Some of them are briefly discussed below.

Question 17.
What is ‘Mixed farming’?
Answer:
Raising of food as well as commercial crops and keeping of lives stock is called “Mixed farming”. It has been introduced in 1951.

Question 19.
Discuss the factors necessary for the production of Hydro-electricity.
Answer:

Question 20.
Give any two examples of Agro-based industries.
Answer:

Question 21.
What are the main four items importing of India?
Answer:
Imports of India : Imports trade of India refers to buying goods from foreign countries and bringing them to home country.
The main items of Imports of India are:

4. Fertilizers :
India is a major importer of chemical Fertilizers. It is because the country is agrarian and the Internal production of fertilizers is insufficient. Potash fertilizers are largely imported.

Exports of India : Export trade of India refers to the sale of goods and services by India to other countries of the world.

The main items of our exports are as follows: 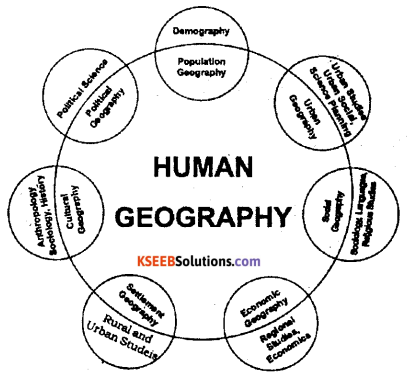 Question 26.
Write a note on modes of communication.
Answer:

I. Internal Migration :
Movement of people fiom one region to another within the same country is called internal
migration. In India there are four streams of mternal migration. They are

1. (a) Rural to Rural : This is estimated that about 65.2% of total migration is of this category.
Female migrants dominated in this stream, Thus it is an important example for matrimonal migration and it is called women migration.

3. Urban to Urban : Generally, people like to move from small town with less facility to large cities ith more facilities.

4. Urban to Rural : Urban areas are usually affected by the pollution.
The retired and aged people prefer to spend their old age life in nearby villages. Thus people move from ltrban to Rural.

Question 29.
Describe the land – use pattern of India.
Answer:
The important types of land use pattern in India are:

2. Land not available for cultivation :

Question 30.
Write the types and distribution of cotton crop in India.
Answer:
Conditions for Cultivation of cotton:

Question 31.
What is ‘Green revolution’? Discuss the advantages of green revolution in India.
Answer:
Increase in Food production through the introduction of high yield crop varieties and the application of modem agricultural techniques is called Green Revolution.

Question 32.
Explain the four major types of roads in India.
Answer:
Classification of roads: In India, roads are of the following types.

Besides these, there are border roads and International highways linking major Indian cities with the capitals of other neighbouring countries.

North – South and East-West corridors: This project connects Srinagar (JK) in the North with Kanyakumari (TN) in the South and Silcher(Assam) in the East with Forbandar (Gujarat) in the West covering major cities along the way. The project has a total length of 7300 km.

Port connectivity project: This is also included in the programmes of NHAI. This project connects the Golden Quadrilateral roads with the 13 major ports (380 km) and other projects (962 km). This is still in progress.

District roads: These roads connect the production and marketing centres with the highways, railways, towns and larger villages with the district headquarters. The Zilla Parishad takes the responsibility for the development and maintenance of these roads.

Village roads: Roads which link the Taluk headquarters with villages and the district highways are called village roads. They are mostly untarred or metalled, They are constructed and maintained by Taluk Panchayats and Village Panchayats.

Question 33.
Why railway transport is very important in India? Discuss.
Answer:
Importance of Railways : Indian Railway have benefited our country in the following ways.

Question 35.
Explain the types of agriculture in India.
Answer:
Various types of farming are practised in different parts of the country. They are as follows :

(a) Migratory subsistances farming : It is a primitive method of farming, practised by tribals in the tropical rainy forests. Under this system formers clear patches of forest by cutting and burning the bushes and trees and cultivate land. Later people migrate to another parts of the forest. Along with cultivation of crops, hunting, fishing and collection of forest resource etc are done by the people.

(b) Sedentary subsistence farming : This is an ancient form of cultivation and practiced by the people living permanetly. Here there is physical factors are favourable for cultivation, of land. The farm lands are not abandoned. They are cultivated through of the year and farmer lived near the land. Hence, this system is called “Sedentary subsistence farming”. Under this system, implements used and the mehtods Of cultivation are primitive. The surplus agricultural produce are sold to neighbouring people or sold in the market.

2. Intensive farming : It is found in the areas of dense population and land holdings are small. in this type of farming land in intentively used and 2-3 harvests are obtained in year. It is known as “Intensive farming”.

It is labour and capital Intensive farming. Large amount of labour and capital is used on a small land holding, to get maximum production of crops. The available small piece of land is ised for cultivation with irrigation facilities throughout the year. In this system, farmers try to raise two or more crops, with careful tilling of the soil. Intensive agriculture is characterized by high yields per unit area and farmers try to get the maximum production from small land holdings. It is common in the fertile and irrigated parts of the country. In this type, agricultural operations are carried on by manual labour and draught animals. Rice is the main crop of Intensive farming in India.

3. Commercial farming : Agricultural crops are produced on a large scale.for the purpose of sale and not for domestic consumption, is called ‘Commercial farming’. This type of farming is generally practised in the large areas of sparse population with good transportation facilities. On large scale farms, using small amount of labour, large scale use of machinery, cash crops are growth for scale.

4. Mixed farming: Farming that includes the raising of crops and keeping of livestock is called ‘Mixed farming’. In this system farmers use the land for raising food as well as commercial crops and also used for other purposes such as livestock-raising, poultry farming, sericulture, bee-keeping etc. Farmer get more income from both side. It has been introduced in India since 1951. It is popular in the states like, Rajasthan, Andhra Pradesh, Punjab, Haryana and Tamil Nadu.

5. Plantation farming: A single cash crop is grown on large area or estates is known as ‘Plantation farming’. This is mainly a commercial type of farming. It requires large amount of labour and capital. Manual labour and skilled labour is important. Under this system crops are grown mainly for export. The important plantation crops of India are Tea, Coffee and rubber.

6. Dry farming : The farming system practised in areas which receive scanty rainfall (i.e, less that 50 cms) and irrigation facilities are very limited or absent is called ‘Dry farming’. This type of farming is practiced in Deccan plateau of south India, Western Rajasthan and other arid and semiarid regions. Famines and droughts are common in these regions. Crops are growing with low yield. Only quick maturing and drought resistant crops are cultivated. Jowar, bajra, ragi, oilseeds are the important dry farming crops.

7. Humid farming: Cultivation of crops, where the areas receiveing sufficient rainfall without the help of irrigation is known as Wet farming or Humid farming. If the rainfall is sufficient i.e. 100 to 150cms throughout the year, double or multiple cropping is practiced in that area. Rice, sugarcane, Jute, tea, coffee, rubber etc, are grown. Sufficient rainfall helps to obtain higher yields and better quality of crops.

8. Irrigation farming: Cultivation of crops with the help of Irrigation is called ‘Irrigation farming’. This type of farming is very essential to India, because monsoon rainfall is seasonal, uncertain and insufficient. The largest area of cultivated land is under irrigation in India. This type of farming is highly concentrated in Uttar Pradesh, Punjab, Haryana, Bihar, Odisha, West Bengal, Andhra Pradesh, Tamil Nadu and Karnataka, and also practiced in many other states of the country.

Question 36.
Explain the major industrial regions in India. –
Answer:
Industrial region refers to the continuous development of industrial landscape, over a large area by concentration of a number of factories of different industries. in short, it is a wide area of manufacturing industries. :

1. Mumbai-Pune Industrial regions: It is the biggest and most important industrial region of the country. Opening of the Bhorghat to Pune in 1830, opening of steamer service through Suez Canal in 1843, opening of first railway line of 32 km in 1853 between Mumbai and Thane etc. Supports lot of development of industries in this region by the British who got the Mumbai island as marriage gift of Catherine Braganza’s dowry in 1661.

3.Ahmedabad-Vadodara Industrial region : It is thrid largest industrial region of the country. It is located in Gujarat and includes the areaš around the Gulf of Khambhat and important industrial centres like Ahmedabad, Vadodara, Koyali, Baruch and Surat et. Ahmedabad is the main centre for cotton.textiles, woollen and silk, textiles, paper, petrochemicals milk products, Engineering, diesel engines, oil refining etc.. åre the other important industries of this region.

5. The Chotanagapur Plateau Industrial regions : This region is located in the states of Bihar, parts of Jharkhand and West Bengal. This region is called the Ruhr of India on account of the growth of a number of iron and steel plants and various engineering industies. Jamshedpur, Bokaro, Chittaranjan, Sindri, Durgapur, Hazaribagh etc are the important industrial town in this region.

Question 37.
Construct a Pie-Diagram by using the following date : 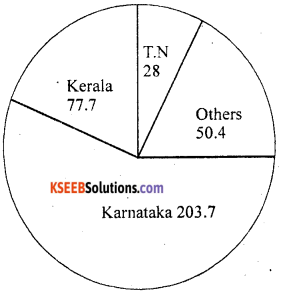 Question 38.
Construct a simple line graph by using the following data.
Growth of irrigated area in India 1961 to 2008 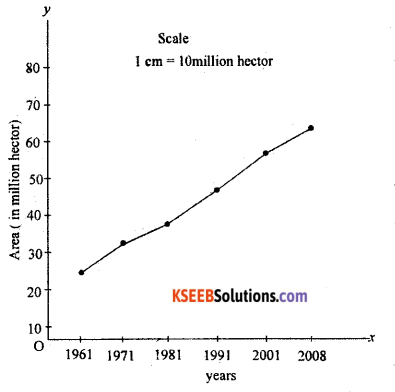 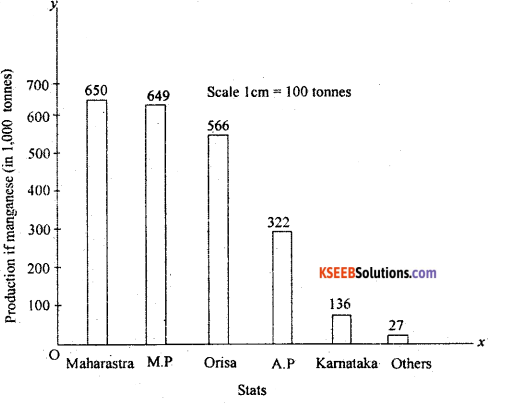 For Blind Students only

Question 38.
Explain the segment of GPS
Answer:
There are three segments of GPS:

3. The user segment : it is a total user and supplier community, both civilian and military. The user segment consists of all earth – based GPS receivers. Receivers very greatly in size and complexity, through the basic design in rather simple. The space and control segments are largely transparent to the operations of navigation functions.

Question 39.
Write the importance of remote sensing.
Answer:
Remote sensing is the science and art of obtaining information about an object, area or phenomenon through the analysis of data aquired by a device that is not in contact with it.

This is done by sensing and recording reflected or emitted energy and processing, analyzing and applying that information.

In much remote sensing. the process involves an- interaction between incident radiation and the targets of interest. This device can be a camera or a bank of sensors operated from an airplane or a satellite. Though satellite we can collect date related agriculture, forest, urban land use, watcr, natural calamities etc the satellite data is based for mapping, monitoring, studyIng the various phenomena related to earth’s surface.