1. Look at the dialogue between an American and Swami Ram Tirtha. Using this information complete the paragraph by writing suitable words or phrases in the space provided.

1. Read the following dialogue and fill in the blanks with the appropriate indirect forms. Yesterday Roshan attended an interview with the manager of ICICI bank.

Roshan : May I come in, Sir?
manager : Yes, come in. Sit down, what is your name?
Roshan : My name is Roshan.
manager : Can you drive a car?
Roshan : Yes, I can. I have been driving for three years.

2. Report the following conversation:
Customer : I must be at that meeting at once. I can’t spare another minute.
Barber : I know all about the meeting.
Customer : Then you’ll let me go there?
Barber : I am afraid, 1 won’t, sir.
Answer:
The customer informed the barber that he should be at that meeting immediately. He added that he couldn’t spare another minute.
The barber replied that he knew all about the meeting.
The customer then wanted to know if the barber would let him go there.
The barber told him politely that he wouldn’t. 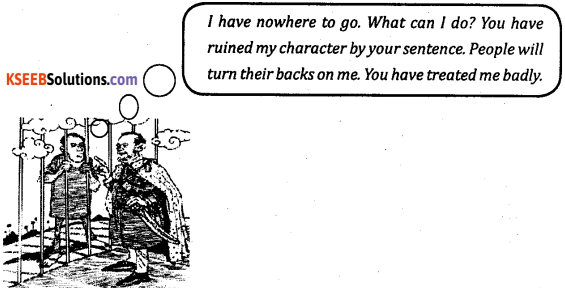 Based on the following pictures, rewrite the dialogues in reported speech.
Answer:
The man said in desperation that he had nowhere to go. He asked helplessly what he could do. He further accused the judge that he had ruined his character by his sentence. He added that people would turn their backs on him. He remarked that he had treated him badly.

The main aim is to share the knowledge and help the students of 2nd PUC to secure the best score in their final exams. Use the concepts of Karnataka 2nd PUC English Answers Workbook Answers Streams Reported Speech in Real time to enhance your skills. If you have any doubts you can post your comments in the comment section, We will clarify your doubts as soon as possible without any delay.