Question 1.
Who, according to Juliet, is whiter than new snow?

Question 2.
How many inhabitants are there in the kingdom of Monaco?

Question 3.
According to the speaker of’On Children’, the one who loves both the arrow and the bow is
(a) the archer
(b) the parents
(c) the children.

Question 4.
Where is the Earth University mentioned by Vandana Shiva located?

Question 5.
Whose name, according to Gonzalo, was his cousin whispering at the time of his death?

Question 6.
Whom did Tammanna consider as his most important possession in ‘The Gardener’?

Question 7.
Where is the defeated foot condemned to live, according to the speaker of ‘To the Foot From its Child’?

Question 8.
When, according to Borges, would history and man disappear?

Question 9.
Name the animal that bowed to George Mikes in Japan.

Question 10.
How long had Roof worked as a bicycle repairer’s apprentice in ‘The Voter’?

Question 11.
Which of the vehicles is called ‘humble’ in ‘Where There is a Wheel’?

Question 12.
Who, according to the speaker of ‘Water’, are playthings in water’s vicious hands?

Question 13.
Why does Romeo say he never saw true beauty till that night? Explain.

Question 14.
Briefly describe the kingdom of Monaco mentioned in ‘Too Dear!’.

Question 16.
Whose love in ‘When You Are Old’ is true and intense? Explain.

Question 17.
How did Basavaiah try to surpass his rival in ‘The Gardener’?

Question 18.
How does Borges look upon his blindness? Explain.

Question 19.
Human effort alone can create heaven on earth. How is this brought out in ‘Heaven, If you are not here on Earth’?

Question 20.
Give an account of the crawling traffic in Brazil as mentioned by George Mikes.

Question 21.
Describe how Marcus Ibe in ‘The Voter’ had managed to become a ‘successful’ politician.

Question 22.
What benefits, according to P. Sainath, has cycling brought into the lives of rural women?

Question 23.
‘The ways of Providence are strange’. How is this true in the case of Don Gonzalo and Dona Laura? Explain.
OR
‘Without vengefulness, there would be no reason for man’s existence’. How does ‘The Gardener’ bring this out?
OR
Water can give life and can also devour lives. Examine the significance of this statement in light of ‘Water’.

Since the beginning, trees have provided us with two of life’s essentials, food and oxygen. As we evolved, they provided additional necessities such as shelter, medicine and tools.

Both above and below ground, trees are essential to the ecosystems in which they reside. Far-reaching roots hold soil in place and fight erosion. They absorb and store rainwater and reduce runoff and sediment deposit after storms. This helps the groundwater supply recharge, prevents the transport of chemicals into streams and prevents flooding. Fallen leaves make excellent compost that enriches the soil.

Many animals, including elephants, koalas and giraffes eat leaves for nourishment. Flowers are eaten by monkeys and nectar is a favourite of birds, bats and many insects. Animals also eat much of the same fruit that humans enjoy. This process helps disperse seeds over great distances. Of course, hundreds of living creatures call trees their home. Leaf-covered branches keep many animals such as birds and squirrels, out of the reach of predators.

Question 24.
Answer the following in a word, a phrase or a sentence each:
(a) Name one of life’s essentials mentioned in the passage.
(b) What do trees take in?
(c) How much of oxygen is produced by one acre of the forest?
(d) Trees are essential to the ecosystems
(i) only above ground
(ii) neither below nor above ground
(iii) both above and below ground.
(e) How is soil erosion prevented by trees?
(f) The part of a tree used to make compost is its
(i) flower
(ii) leaf
(iii) fruit.
(g) Where is nectar, liked by birds, bats and insects, found?
(h) Who call trees their home?
(i) Add a prefix to the word ‘essential’ to form its antonym.
(j) Trees provide ______ (additional/addition) necessities of life.
Answer:
(a) Oxygen.
(b) Carbon dioxide.
(c) Four tons of oxygen.
(d) (iii) both above and below ground.
(e) The roots of trees hold the soil in place and thus prevent soil erosion.
(f) (ii) leaf.
(g) The nectar, liked by birds, bats and insects, is found in flowers.
(h) Hundreds of living creatures.
(i) Inessential.
(j) additional.

V. Complete the following by filling in the blanks using the right form of the verb (passive) given in brackets. (3 × 1 = 3)

Question 26.
The prince agreed to show mercy and so the matter ______ (arrange). The only problem was that there was no suitable prison for a person who _______ (sentence) for life. However, there was a small lock-up where people ______ (keep) temporarily.
Answer:
was arranged, was sentenced, were kept.

Question 29.
Fill in the blanks by choosing the appropriate expressions given in brackets: (2 × 1 = 2)
(all and sundry, leaps and bounds, fair game)
The number of motor vehicles in Brazil is growing by ______ almost as if cars were distributed free of charge to _____
Answer:
leaps and bounds, all and sundry.

VI. Read the following passage and make notes by drawing and filling the boxes given below: (8 × 1/2 = 4)

Question 31.
Paper was discovered in China by an official named Tsai Lun. He discovered it in about AD 105 Until then most of the documents in China had been written on parchment and Vellum. Parchment was made from the skin of goats or sheep. Vellum was made from the skin of a calf. A number of animals had to be killed to make a book. However, now we do not have to do that. We use the wood pulp, at present, for making paper. 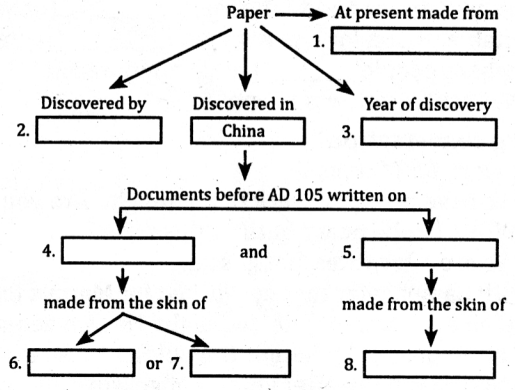 Question 33.
Imagine that you have organised a function to mark the ‘World Tourism Day’. You have to speak on the importance of travelling. Use the following points and write a speech in about 100 words: [5]
Travel – necessary – provides fun – entertainment – information – expands one’s understanding – mental horizons – an opportunity for visiting diverse places and people.
OR
Student-teacher ratio plays an important role in imparting education. Given below is the bar graph that represents data pertaining to this ratio in different states of our country. Each bar indicates an average number of students per teacher. Use the information to write a report in about 120 words. 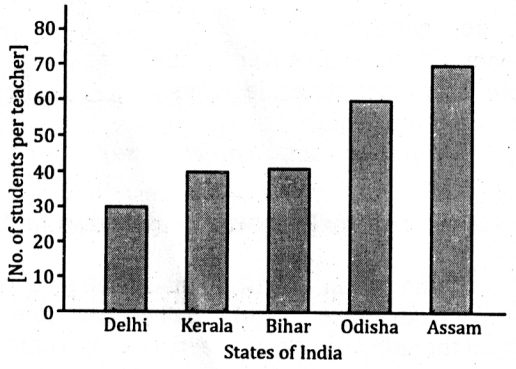 Question 34.
Trees are essential to the ecosystem in which they reside. They absorb and store rainwater. This helps the groundwater supply recharge. Fallen leaves make excellent compost that enriches the soil.
i. Which: ______
ii. They: _____
iii. This: _____
iv. That: ______
Answer:
i. Ecosystem
ii. Trees
iii. Absorbing and storing of rainwater
iv. Compost from fallen leaves.

Question 35.
Rearrange the jumbled segments to form a meaningful sentence. (1 × 1 = 1)
to us / given / all things / for a purpose / have been
Answer:
All things have been given to us for a purpose.